Protesters in the Turkish port of Bodrum tried to block "My Solaris," a yacht with reported ties to Russian oligarch Roman Abramovich, from docking on Monday.

The reported members of the Odessa Children and Youth Sailing School — commonly referred to as the Optimist Sailing Club — were carrying Ukrainian flags and signs reading "No war."

"It was the whole team’s decision to block the approach of the yacht of the Russian oligarch Abramovich," team coach Pavlo Dontsov told CNN.
"We raise the flag of our country at many international competitions. We just want to show everyone who Ukraine is."

According to Marine Traffic, "My Solaris" did dock in Bodrum on Monday evening.

The conviction Tuesday of Russian opposition figure and Kremlin critic Alexey Navalny on “new trumped-up charges” shows Moscow is intensifying its crackdown on dissent at home while it fights its unprovoked invasion of Ukraine, Human Rights Watch said Wednesday.

“This verdict is apparently intended not only to silence Navalny but to serve as a warning to Russian civil society and anyone who dares to stand up to the Kremlin’s policies,” Hugh Williamson, Europe and central Asia director at Human Rights Watch said in the statement.

Already serving a two-and-a-half-year sentence, Navalny was found guilty of embezzling money from his own Anti-Corruption Foundation and sentenced to a further nine years in prison. He was also fined the equivalent of $11,200.

Navalny was detained in February 2021 upon arrival in Moscow from Berlin, Germany, where he had spent several months recovering from poisoning with nerve agent Novichok — an attack he blames on Russian security services and on President Vladimir Putin himself.

“The cases against Navalny are part of the Kremlin’s grim landscape of repression against Russia’s civil society and peaceful dissent, which has drastically intensified since Russia’s full-scale invasion of Ukraine,” Williamson said.

Russian authorities have detained thousands of protesters against the war since it began on Feb. 24.

“The Kremlin seems determined to isolate Russian society from the outside world to cut Russians off from uncomfortable facts, including about Russia’s invasion of Ukraine,” Williamson said.

When Russian armed forces launched an unprovoked assault on Ukraine last month, Beijing appeared to side with Moscow, accusing the United States and its NATO allies of inviting conflict by allowing their security bloc to expand eastward.

Now, as China faces pressure from the West to condemn the Russian invasion, it's ramping up similar rhetoric to talk about America's footprint in Asia.

In recent days, senior Chinese Foreign Ministry officials and influential Communist Party publications have accused the US of seeking to build a NATO-like bloc in the Indo-Pacific, with one official warning of "unimaginable" consequences if it does.

At a conference in Beijing on Saturday, Chinese Vice Foreign Minister Le Yucheng said the Ukraine crisis could be used as a "mirror" to view the security situation in the Asia-Pacific region.

Le didn't name the US, but he explicitly referred to the Indo-Pacific strategy — a plan the Biden administration detailed last month to strengthen America's role in the region, such as through supporting democracy and bolstering its alliances and partnerships, including with Taiwan. 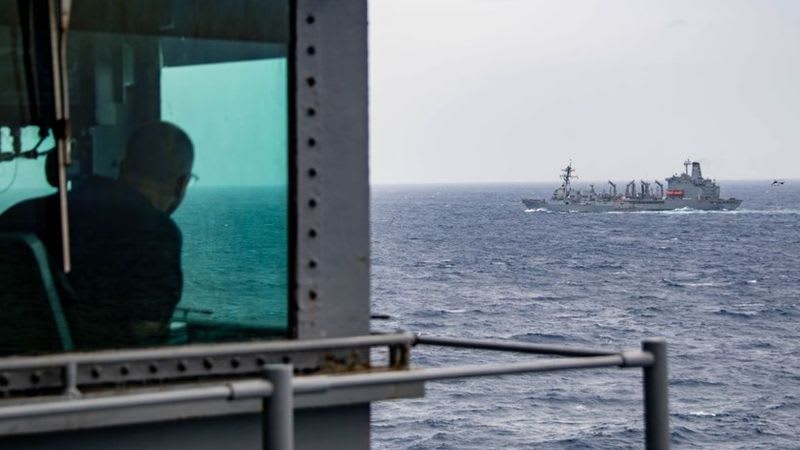 President Joe Biden departs Wednesday on one of the highest-stakes presidential trips in recent memory, a moment for the US President to assume leadership of a newly united West.

The trip could still underscore the alliance’s limits in ending the bloodshed in Ukraine, with Western leaders struggling to find ways to halt Russian President Vladimir Putin’s war.

So far, the punishing Western sanctions haven’t stopped Putin; it’s unclear whether the new steps expected this week, including sanctions on hundreds of members of Russia’s lower legislative body, will be different.

Emergency summits in Brussels, Belgium, of NATO, the European Union and the G7 will focus on displays of cooperation in punishing Russia and providing support to Ukraine as it comes under fire. A stop afterward in Poland is meant to highlight the massive refugee crisis that’s followed Russia’s invasion as well as to reassure allies on NATO’s eastern edge.

For Biden, the last-minute talks are a venue to demonstrate the foreign policy credentials he promised as a candidate when he vowed to restore American leadership and repair broken alliances. 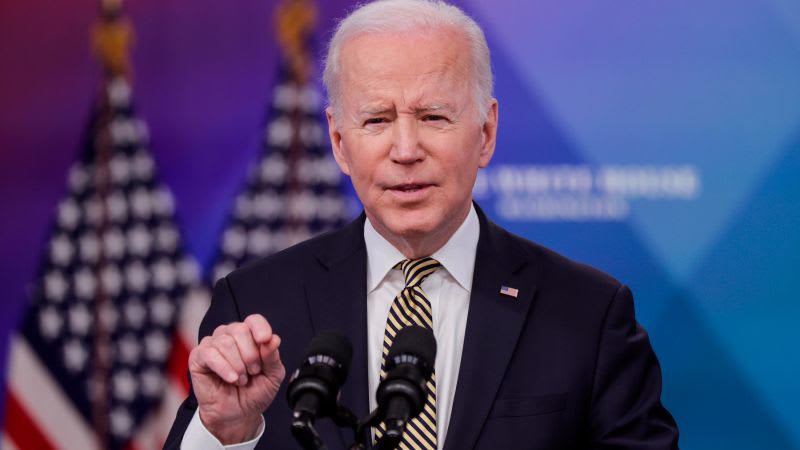 Russia has begun firing on the besieged city of Mariupol from the Sea of Azov, a senior US defense official said, as a Ukrainian counteroffensive appears to be pushing back Russian forces from around the capital, Kyiv.

Here are the latest developments in the war:

"I would like to repeat this again to all Russian pilots, they are not thinking about the orders they are fulfilling. Because killing civilians is a crime. And you will be responsible for this whether it is today or tomorrow, this is inevitable," he said during an address posted to the Ukrainian government’s Facebook page.
"Especially we are talking about a bomber plane over Mariupol, and that will happen to everyone who is killing our civilians, in our peaceful land," he said.

Without offering evidence, Zelensky claimed that Ukrainian Armed Forces took down a Russian plane near Chornobaivka, in Kherson.

Ukrainian forces have been trying in the last few days to regain territory from the Russians, according to a senior US defense official, who described them as “able and willing” to do so.

Here's the situation on the ground:

Counterattacks near the capital: A Ukrainian counterattack north and west of Kyiv appeared to have made some headway, jeopardizing Russian efforts to encircle the capital and threatening the ability of Russian forces to resupply the forward units that are exposed to the north of the city.

Makariv: One such area is Makariv, a strategic town 30 miles (48 kilometers) west of Kyiv. After days of fighting, Ukrainian forces regained control of the town, the Armed Forces of Ukraine said in a Facebook post Tuesday. CNN could not confirm the claim. Makariv had sustained significant damage from ongoing Russian airstrikes, with video showing widespread devastation. If Ukrainian forces consolidate their control of Makariv, it would become more difficult for Russian forces to secure the western approaches to Kyiv and then push further south.

North of Kyiv: There are also indications that Russian forces have suffered setbacks to the north of Kyiv in areas they have held almost since the beginning of the invasion. A brief video geolocated by CNN showed Ukrainian troops walking in the town of Moschun, about 20 miles (35 kilometers) north of the capital. Ukrainian drone video geolocated during the weekend showed the destruction of Russian armor in the same area.

Flooding of Irpin River: Satellite images from Monday showed growing flooding from the Irpin River. CNN previously reported that a dam along the Dnieper River was flooding the Irpin River basin and its tributaries. The river is critical to the Russian advance toward Kyiv; if the Russians cannot cross it, they can't take Kyiv from the west. It's unclear how the dam began flooding: whether the gates were opened on purpose by the Ukrainians, or it was hit by a military strike.

Borodyanka: Some 12 miles (20 kilometers) north of Makariv is the town of Borodyanka, which has been held by Russian and Chechen forces since early in the campaign. If the Ukrainians were to take Borodyanka, forward Russian units could be cut off. The battlefield is fluid, and the Russians could reverse recent losses. But if the Ukrainians hold Makariv and extend their control over the area, Russian positions between the town and Kyiv would become vulnerable, further impeding their goal of pushing south beyond the main east-west highway to encircle the capital.

Kherson and Mykolaiv: A senior US defense official said Ukrainians are fighting to take back the southern city of Kherson, as well as pushing Russian forces from the northeast of Mykolaiv, forcing them to reposition south of the city. The official cautioned that the US cannot say whether these moves are part of a “larger operational plan” by the Ukrainians or not, but called the Ukrainian defense “nimble” and “agile."

US President Joe Biden plans to slap sanctions this week on hundreds of Russians serving in the country’s lower legislative body, an official familiar with the announcement said.

The move is expected to kick off a slew of new steps to punish Russia for its war in Ukraine.

Biden is expected to unveil the new sanctions on members of the Duma while in Europe for a series of snap summits this week. The US had already sanctioned some members of the body, but this week’s announcement will expand the list.

Earlier, National Security Adviser Jake Sullivan previewed sweeping sanctions enacted together with US allies that are set to be announced Thursday.

He said the steps would ensure individuals aren’t able to evade sanctions already imposed by the West.

Russian President Vladimir Putin's chief spokesman has conceded that Russia has yet to achieve any of its military goals in Ukraine and refused to deny that Moscow could resort to the use of nuclear weapons.

Putin has previously hinted at using nuclear weapons against nations that he saw as a threat to Russia. Back in February, the Russian President said in a televised statement, "No matter who tries to stand in our way or all the more so create threats for our country and our people, they must know that Russia will respond immediately, and the consequences will be such as you have never seen in your entire history."

He then said in a televised meeting with Russian defense officials that "officials in leading NATO countries have allowed themselves to make aggressive comments about our country, therefore I hereby order the Minister of Defense and the chief of the General Staff to place the Russian Army Deterrence Force on combat alert."

When asked what Putin thought he had achieved in Ukraine so far, Peskov answered: "Well, first of all, not yet. He hasn't achieved yet."

The spokesman also claimed that the "special military operation" — the Kremlin's official euphemism for Russia's invasion in Ukraine — was "going on strictly in accordance with the plans and the purposes that were established before hand."

Peskov also repeated Putin's demands, saying that the "main goals of the operation" are to "get rid of the military potential of Ukraine," to ensure Ukraine is a "neutral country," to get rid of "nationalist battalions," for Ukraine to accept that Crimea — annexed by Russia in 2014 — is part of Russia and to accept that the breakaway statelets of Luhansk and Donetsk "are already independent states." 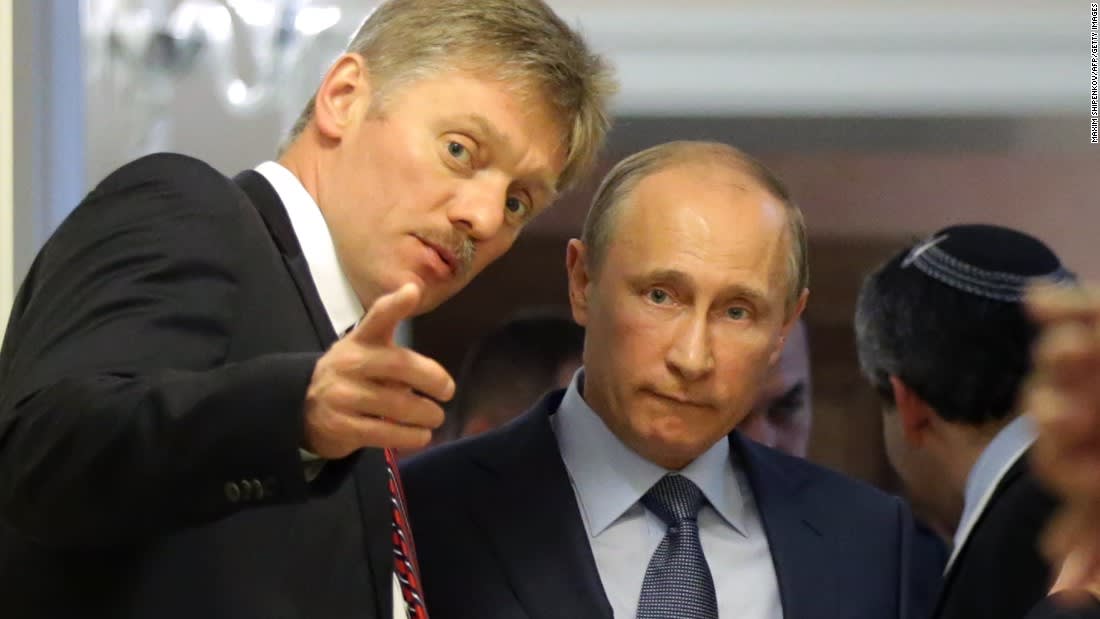