US national security adviser Jake Sullivan broadly previewed actions the United States would take in conjunction with other world leaders during US President Joe Biden’s trip to Brussels, Belgium, Thursday.

“I’m not going to get ahead of an announcement, which will be rolled out in conjunction with our allies on Thursday when the President has the opportunity to speak with them at that time, a further package of sanctions,” Sullivan told reporters Tuesday.

“What I will say is that one of the key elements of that announcement will focus not just on adding new sanctions, but on ensuring that there is a joint effort to crack down on evasion, on sanctions busting, on any attempt by any country to help Russia basically undermine, weaken, or get around the sanctions,” he continued, calling that “an important part of this next phase.”

There will be new sanctions designations and targets, Sullivan added, but “a big part of it is about effective enforcement and evasion, applying the lessons that we've learned from other circumstances where we have, in fact, imposed sanctions on countries.”

Biden is set to join world leaders for an extraordinary NATO summit Thursday, as well as a meeting of the G7 and the European Council.

On Monday, after intense fighting, Ukrainian forces regained control of Makariv, a town west of Kyiv that had been battered by Russian airstrikes.

It's tempting to view this small victory for Ukrainian forces as a shift of momentum in the battle for Kyiv: In better times, this suburb would be only an hour's drive to Khreshchatyk, the capital's central boulevard.

Kyiv once appeared to be the primary objective of what the Kremlin must have envisioned as a swift regime-change operation. The capital has been rocked by explosions in recent days, but it is far from encircled.

On the Azov Sea, the besieged southeastern city of Mariupol — despite being surrounded and mercilessly pummeled, block by block, by Russian firepower — still eludes Russian control. Its defenders rejected an ultimatum to surrender by Monday morning, thwarting a Russian effort to finalize a land bridge linking Crimea with the separatist republics of the eastern Donbas region.

Nearly a month after Russia launched its invasion of Ukraine, the Ukrainian military has perceptibly shifted its messaging. The Russian military's advances have been stymied, the Ukrainians say, forcing a shift in Russian tactics.

"Due to the lack of success of the ground phase of the operation, the enemy continues to actively launch missile and bomb strikes on important military and civilian infrastructure using operational and tactical aircraft, high-precision missile weapons and indiscriminate munitions," the General Staff of the Armed Forces of Ukraine said in a statement Tuesday.

There's plenty of evidence to suggest that the Russians are taking more of a standoff approach, launching salvos of missiles from outside of Ukrainian airspace. 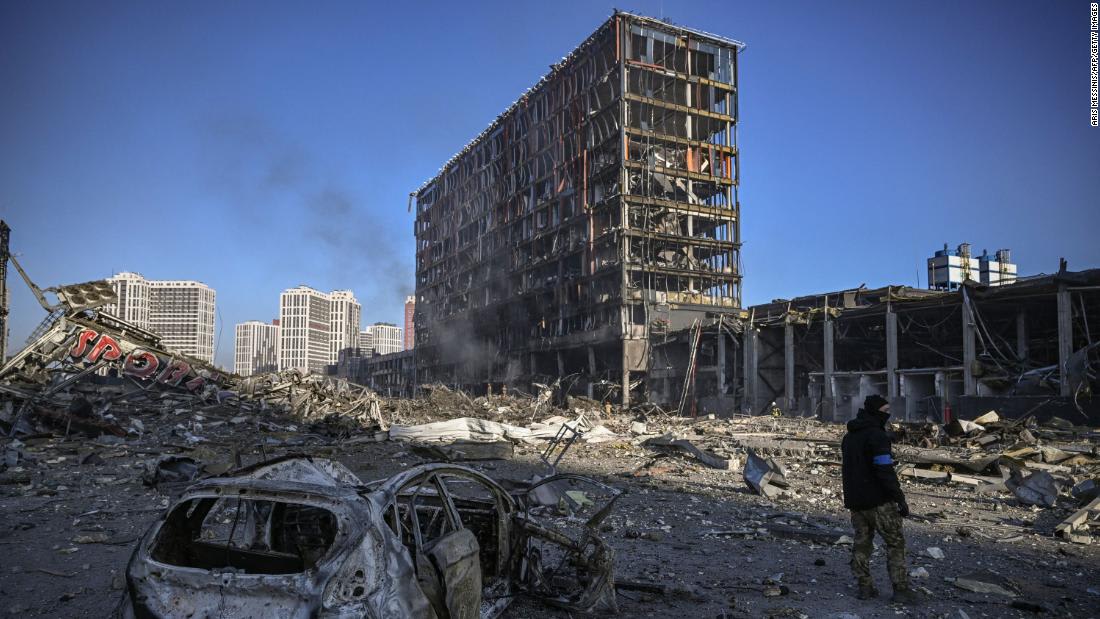 Ukraine has denied Russia a victory for four weeks. A grim new phase could be coming

It's nighttime in Ukraine. These are the key takeaways from Tuesday so far:

Belarus could join war: The US and NATO believe that Belarus could “soon” join Russia in its war against Ukraine, US and NATO officials tell CNN, and that the country is already taking steps to do so. It is increasingly “likely” that Belarus will enter the conflict, a NATO military official said on Monday.

Ukrainians fighting to reclaim territory: Ukrainians forces have now been trying to take back territory in the last few days that the Russians had gained, according to a senior US defense official, calling them “able and willing” to do so.

Ukrainian forces have regained control of Makariv, a town 30 miles west of Kyiv, the Armed Forces of Ukraine said in a post on Facebook on Tuesday. Meanwhile, the mayor of Boryspil, a city to the east of the capital, is calling on residents to leave, saying "fighting is already raging around the region" in a video statement posted to Facebook.

Dwindling supplies: Some towns in Ukraine don’t have more than three or four days’ worth of food, the aid agency Mercy Corps said Tuesday, warning that the humanitarian system in the country “is entirely broken down.”

Food and medical supplies have almost run out in the southern Ukrainian city of Kherson, according to spokesperson for Ukraine’s Ministry of Foreign Affairs Oleg Nikolenko.

Refugees: More than 3.5 million refugees have now fled Ukraine, according to the latest update from the UN Refugee Agency.

About half a million refugees who have fled the war in Ukraine to Poland require support for mental health disorders, and 30,000 are estimated to have severe mental health problems, the World Health Organization’s representative in Poland said Tuesday.

German Chancellor Olaf Scholz said Western sanctions on Russia are showing “effects, which will only get more dramatic every day.” However, the chancellor stressed that cutting off energy supplies from Russia must be “manageable” for European countries.

The Ukraine war “could be a longer dispute and therefore we must cope together,” Scholz said, speaking at a press conference alongside European Parliament President Roberta Metsola.

“This also applies to many other [European] countries who are even more dependent on [Russian] coal, oil and gas, even more than Germany,” he added.

“We decided to make us independent as quickly as possible from gas and oil imports from Russia,” the German leader said, adding that some “very intensive construction work and contracts” are necessary to make Germany less dependent on Russian energy.

“We must buy our energy from friends, not enemies, because at the end we are paying for this war every day,” she added.

“It is time to take a lead. We are not only talking about the green agenda, considering it from the environmental perspective, a climate perspective, but we are also seeing it from a perspective of security,” Metsola continued.

“More and more of them [Ukrainians] are finding refuge in France or transiting through our territory,” Castex said, following an interdepartmental crisis meeting on the issue.

More than 26,000 Ukrainian refugees have arrived in France since the beginning of the war, according to Castex. Among them, 10,500 have obtained temporary residency provided under the EU temporary protection policy, activated on March 3.

“We are entering a crisis that will last,” Castex said. “It’s our country’s honor to keep the warmest welcome possible for our Ukrainian friends.”

Russia has begun firing on the city of Mariupol from the Sea of Azov, according to a senior US defense official, using a group of approximately seven ships to launch attacks on the critical coastal city.

The official said a few of the ships may be a minesweeper and some amphibious landing ships, but some of the ships are surface combatants that have joined the attack on the besieged city over the last 24 hours.

“We continue to observe a number of Russian forces inside the city [of Mariupol],” the official said. “We think at least some of them are separatist forces that came from the Donbas, and again, the Ukrainians are fighting very very hard to keep Mariupol from falling.”

The city has already been under an ongoing Russian bombardment from long-range missile launches and artillery outside the city.

Separately, the Russians have a total of about 21 ships in the Black Sea, the official said. Twelve of the ships are surface combatants, while the rest are amphibious ships.

The Wagner Group, a paramilitary group sponsored by Russia, is “active” in Ukraine, a senior US defense official told reporters on Tuesday.

There are no foreign fighters “that have flown into the country” from Syria or elsewhere that the US has seen, the official added.

The United States has seen indications that some Russian soldiers have gotten frostbite in Ukraine because they lack the appropriate cold-weather gear, according to a senior US defense official.

The lack of proper equipment is compounded by the shortages of food and fuel among Russian forces, the official said, as logistics and sustainment problems continue to plague Russia’s invasion of Ukraine, which is nearing the one-month mark.

“Even in terms of personal equipment for some of their troops, they’re having trouble and we’ve picked up indications that some troops have suffered and [have been] taken out of the fight because of frostbite,” the official said on a call with reporters Tuesday morning.

The Russians are also having command and control challenges, which has made communications difficult, further exacerbating the logistics and sustainment problems, the official said.

If Ukrainian forces consolidate their control of Makariv, it would become more difficult for Russian forces to secure the western approaches to Kyiv and then push further south. There are also indications that Russian forces have suffered setbacks to the north of Kyiv in areas they have held almost since the beginning of the invasion.

A brief video geolocated by CNN showed Ukrainian troops walking in the town of Moschun, about 20 miles (35 kms) north of the capital. The video appears to have been shot in the last two days.

Ukrainian drone video geolocated during the weekend showed the destruction of Russian armor in the same area.

Additionally, the flooding of the Irpin River may pose logistical difficulties for Russian troops in the area, as could the destruction of a railway bridge north of Irpin.

If Ukrainian forces consolidate their gains, the Russians' most advanced positions at Bucha and Hostomel immediately north of Kyiv could become vulnerable to encirclement.

The Russians' capture of the Antonov air base at Hostomel just after the invasion began was short-lived, preventing them from using it as an airbridge. Russian forces have artillery positions near the Antonov base, according to recent satellite imagery.

Some 12 miles (or about 20 kilometers) north of Makariv is the town of Borodyanka, which has been held by Russian and Chechen forces since early in the campaign. If the Ukrainians were to take Borodyanka, forward Russian units could be cut off.

The battlefield is fluid, and the Russians could reverse recent losses. But if the Ukrainians hold Makariv and extend their control over the area, Russian positions between the town and Kyiv would become vulnerable, further impeding their goal of pushing south beyond the main east-west highway to encircle Kyiv.

At present, the southern route out of the capital is still open, and according to CNN teams that have traveled the route, it is frequently congested with traffic bringing supplies into Kyiv.

Russia's inability to complete the encirclement of the capital over nearly four weeks has come as a surprise to the Western officials, some of whom predicted that Kyiv would fall within 72 hours of the invasion beginning.