The US has “seen indications that the Ukrainians are going a bit more on the offense now,” Pentagon spokesperson John Kirby said during a briefing at the Pentagon on Tuesday.

In the south near Kherson, Ukrainians have “tried to regain territory,” Kirby added.

“They have been defending very smartly, very nimbly, very creatively, in places that they believe are the right places to defend, and we have seen them now, in places particularly in the south near Kherson, they have tried to regain territory,” Kirby said.

Here's a look at where Russian forces have occupied Ukrainian territory: 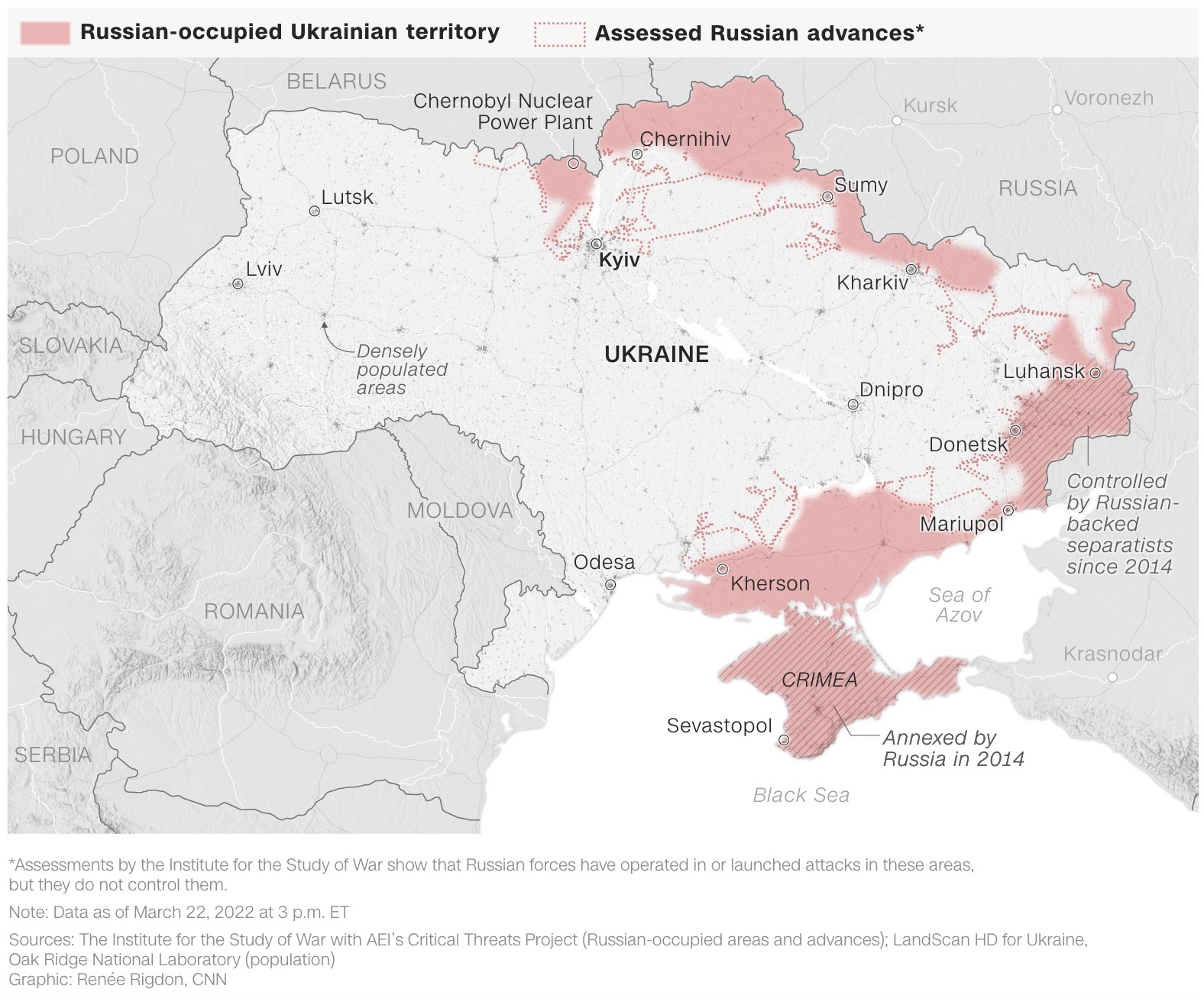 to achieve any of its military goals in Ukraine and refused to deny that Moscow could resort to the use of nuclear weapons.

When asked what Putin thought he had achieved in Ukraine so far, Peskov answered, "Well, first of all, not yet. He hasn't achieved yet."

The spokesperson also claimed that the "special military operation" — the Kremlin's official euphemism for Russia's invasion in Ukraine — was "going on strictly in accordance with the plans and the purposes that were established before hand."

Deputy Irish Prime Minister (Tanaiste) Leo Varadkar said Tuesday that he expects 40,000 Ukrainian refugees to be in Ireland by the end of April.

While speaking in the Irish parliament, Varadkar said that as of Tuesday morning, more than 10,000 Ukrainians had arrived in the country and registered for international protection.

French carmaker Renault resumed production at its Moscow factory on Monday. However, the return will last only three days, the group’s spokesperson Rie Yamane confirmed to CNN on Tuesday.

“Renault Russia has confirmed the restart [of production] on Monday but only for three days,” Yamane said. She declined to provide more details when CNN asked why the company is restarting its production for three days.

Russia was a key piece in Renault’s global empire before the war broke out. With 482,264 cars sold in 2021, Russia was the second most important market for Renault, ranking only behind the carmaker’s home base in France in terms of sales volume, according to the group’s 2021 sales results.

Renault owns major Russian car manufacturer AvtoVAZ, whose brand Lada represented nearly 21% of the Russian market in 2021. Lada Vesta and Lada Granta were the two most popular car models in Russia in 2021, according to Renault Group’s 2021 financial results.

Renault's share price has dropped by more than 26% since Russia launched the invasion on February 24, according to data from the Paris stock exchange.

The French state is the biggest single shareholder of Renault, holding 15.01% of the share at the end of 2020, according to data from the group.

Hackers associated with Russian internet addresses have been scanning the networks of five US energy companies in a possible prelude to hacking attempts, the FBI said in a March 18 advisory to US businesses obtained by CNN.

The FBI issued the notice days before US President Joe Biden publicly warned that Kremlin-linked hackers could target US organizations as the Russian military continues to suffer heavy losses in Ukraine and as Western sanctions on the Kremlin begin to bite.

Deputy national security adviser Anne Neuberger said during Monday's White House briefing that Russia had been conducting "preparatory activity" for cyber attacks, which she said could include scanning websites and hunting for software vulnerabilities."

There are at least 18 US companies in other sectors, such as defense and financial services, that were subjected to the scanning, the FBI said.

There are no confirmed breaches related to the scanning, but the FBI advisory is the latest in a chorus of warnings from US officials to critical infrastructure operators to be on alert for potential Russian hacking. “The magnitude of Russia's cyber capacity is fairly consequential and it's coming,” Biden told business executives on Monday.

The Russia-based Internet Protocol addresses, or data that identifies a computer, are “believed to be associated with cyber actors who previously conducted destructive cyber activity against foreign critical infrastructure,” the FBI said in its advisory.

“This scanning activity has increased since the start of the Russia/Ukraine conflict, leading to a greater possibility of future intrusions,” the FBI memo states. 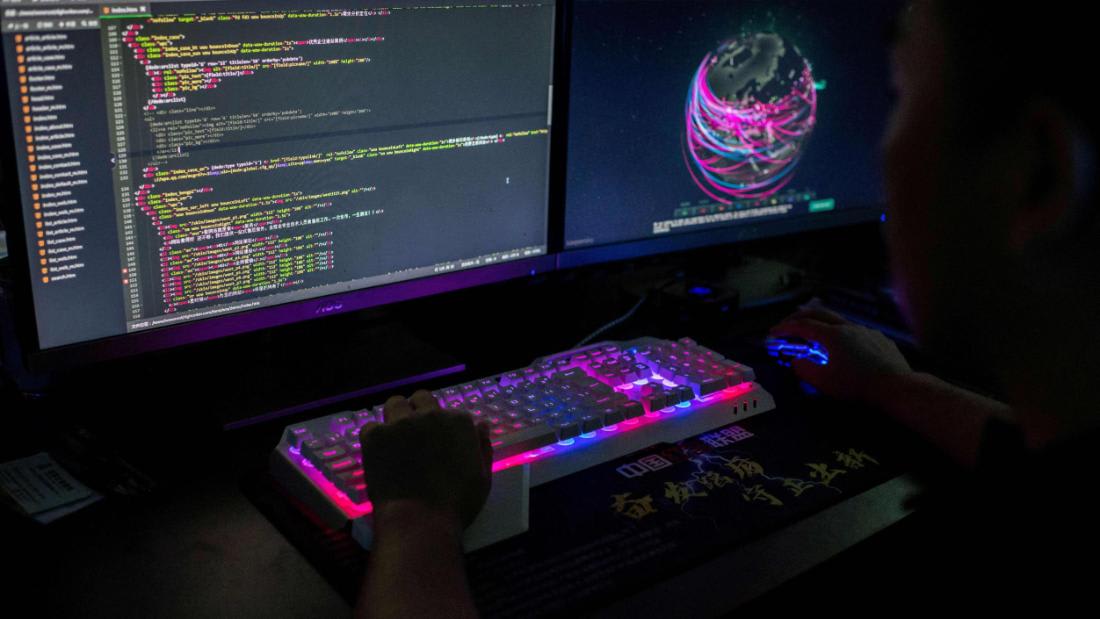 “I can't make predictions going forward. What I can tell you is we have not seen since those meetings or since the President's conversation with Xi, the provision of military equipment by China to Russia, but of course, this is something we are monitoring closely,” Sullivan told reporters Tuesday.

He continued: “We will continue to monitor it. And the President made clear to President Xi the implications and consequences of any such provision of equipment and they very well understand.”

Russia has requested military support and economic assistance support from China, two US officials told CNN last week. China has conveyed some openness to offering help to Russia, according to a US diplomatic cable to allies. Both Russia and Beijing have denied that there have been any such requests.

On Friday, Biden sought to dissuade Xi from assisting Russia, warning his Chinese counterpart during a 110-minute long video call of the "implications and consequences" for Beijing if it were to provide material support to Moscow.

According to Sullivan, Biden will attend an emergency NATO summit in Brussels, joined by leaders of the other 29 NATO allies, before addressing the 27 leaders of the European Union at a session of the European Council. From there, Biden “will have the opportunity to coordinate on the next phase of military assistance to Ukraine,” and “join our partners in imposing further sanctions on Russia and tightening the existing sanctions to crack down on evasion and to ensure robust enforcement.”

The President is also expected to make a slew of new announcements, including “a joint action on enhancing European energy security and reducing Europe's dependence on Russian gas at long last,” as well as “longer term adjustments to NATO force posture on the Eastern Flank.” Biden will also make further commitments on human rights “to respond to the growing flow of refugees” flowing from Ukraine, Sullivan said.

In Poland, Biden “will engage with US troops who are now helping to defend NATO territory, and he will meet with experts involved in the humanitarian response,” and hold a bilateral meeting with Polish President Andrzej Duda. Sullivan did not say whether the President would meet personally with refugees while traveling to Poland.

In his remarks to reporters Tuesday, the national security adviser outlined the administration’s priorities while traveling to Europe, noting that Russian President Vladimir Putin “has thus far manifestly failed” in subjugating neighboring Ukraine, enhancing Russian power in the region, or degrading Western influence.

“For our part, since President Biden and the United States began warning the world of impending Russian aggression, back in November, we have clearly and consistently pursued three lines of effort,” Sullivan told reporters. “First, help Ukraine defend itself by supplying weapons and military equipment. Second, impose severe and escalating economic costs on Russia through the application of unprecedented sanctions in close coordination with allies and partners in Europe, the Indo-Pacific and other parts of the world, and third, fortify NATO and the Western alliance by enhancing our force posture on the eastern flank, and making our allies more resilient against other forms of Russian aggression. We've made decisive moves on all three fronts, and President Biden's trip will involve further actions on each of these three fronts.”

In a series of tweets Tuesday, Biden outlined priorities and stops for his trip.

The strike killed one person, derailed 15 freight cars and destroyed a stretch of track, Reznichenko said. Station operations have been suspended indefinitely, he added.

Pavlohrad is an important crossroads for Ukraine’s railway system. It is a railroad cargo hub and transport link to several eastern regions which are active frontlines in Russia’s war with Ukraine.

US national security adviser Jake Sullivan broadly previewed actions the United States would take in conjunction with other world leaders during US President Joe Biden’s trip to Brussels, Belgium, Thursday.

“I’m not going to get ahead of an announcement, which will be rolled out in conjunction with our allies on Thursday when the President has the opportunity to speak with them at that time, a further package of sanctions,” Sullivan told reporters Tuesday.

“What I will say is that one of the key elements of that announcement will focus not just on adding new sanctions, but on ensuring that there is a joint effort to crack down on evasion, on sanctions busting, on any attempt by any country to help Russia basically undermine, weaken, or get around the sanctions,” he continued, calling that “an important part of this next phase.”

There will be new sanctions designations and targets, Sullivan added, but “a big part of it is about effective enforcement and evasion, applying the lessons that we've learned from other circumstances where we have, in fact, imposed sanctions on countries.”

Biden is set to join world leaders for an extraordinary NATO summit Thursday, as well as a meeting of the G7 and the European Council.