During the special operation in Ukraine, according to the Regional Military Commissariat as cited by GTRK Kostroma, servicemen of the 331st Guards Airborne Regiment “gave their lives for the security of [Russia]."

Some background: The 331st Guards Airborne Regiment is considered one of Russia’s elite units. The regiment fought in both Chechen wars and some of its members were directly involved in the Donbas conflict in 2014 to 2015. It took part in the Victory Day parade in Red Square in May 2018.

A new shelling in Kyiv on Friday damaged a residential building, killing one person, according to Ukirainian authorities. A school and playground were also hit.

Here's how some areas of Kyiv look now, as the Russian invasion of Ukraine continues:

The United Kingdom on Friday revoked the broadcasting license of the Kremlin-backed propaganda network RT, according to a statement from regulators.

The statement from regulator Ofcom said its investigation into RT had found its licensee, ANO TV Novosti, was not fit and proper to hold a UK broadcast license.

"RT is funded by the Russian state, which has recently invaded a neighbouring sovereign country," the statement said. "We also note new laws in Russia which effectively criminalise any independent journalism that departs from the Russian state’s own news narrative, in particular in relation to the invasion of Ukraine. We consider that given these constraints it appears impossible for RT to comply with the due impartiality rules of our Broadcasting Code in the circumstances," the statement said.

RT was taken off the air in the UK two weeks ago after the country and the European Union imposed sanctions on Russia in response to its invasion of Ukraine.

Moscow denounced this decision and said it is part of “the anti-Russian madness that is happening in Europe and the US” and another step to “grossly restrict freedom of speech.”

“I have no doubt, RT will continue to share its voice and its point of view to those who want to see and hear it,” Kremlin spokesperson, Dmitry Peskov, told reporters.

Here's what it's like to spend a whole day watching RT: 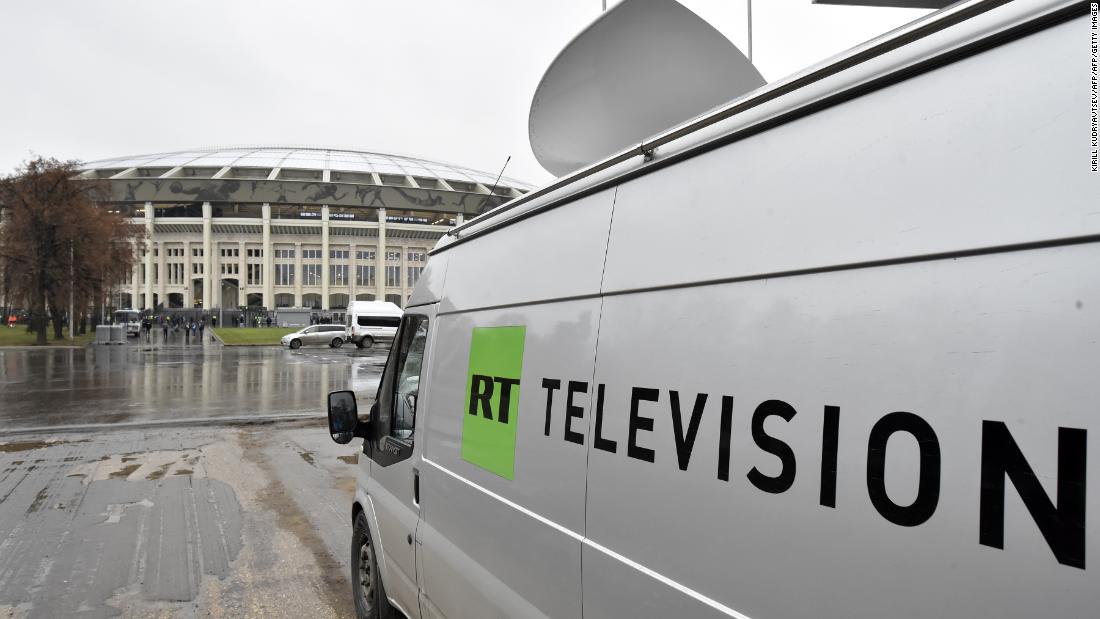 Officials from the Donetsk region and Kyiv said Friday they had no further update on how many people survived an attack on a Mariupol theater that was being used as a shelter.

Donetsk regional head Pavlo Kyrylenko said he would not be commenting until he had received official reports.

Ukraine’s human rights commissioner Liudmyla Denisova said there was no update on figures released Thursday, which reported 130 people rescued from a total of 1,300 people believed to have been sheltering in the building.

“We are praying for them to be alive, but as of now we don't have any information,” she said.

Some context: Hundreds of people were thought to have taken shelter in the theater in Mariupol amid the ongoing Russian siege of the city. Russian forces have bombarded the coastal city for weeks, trapping hundreds of thousands of people. Ukrainian officials estimate 2,500 civilians have died in the fighting. 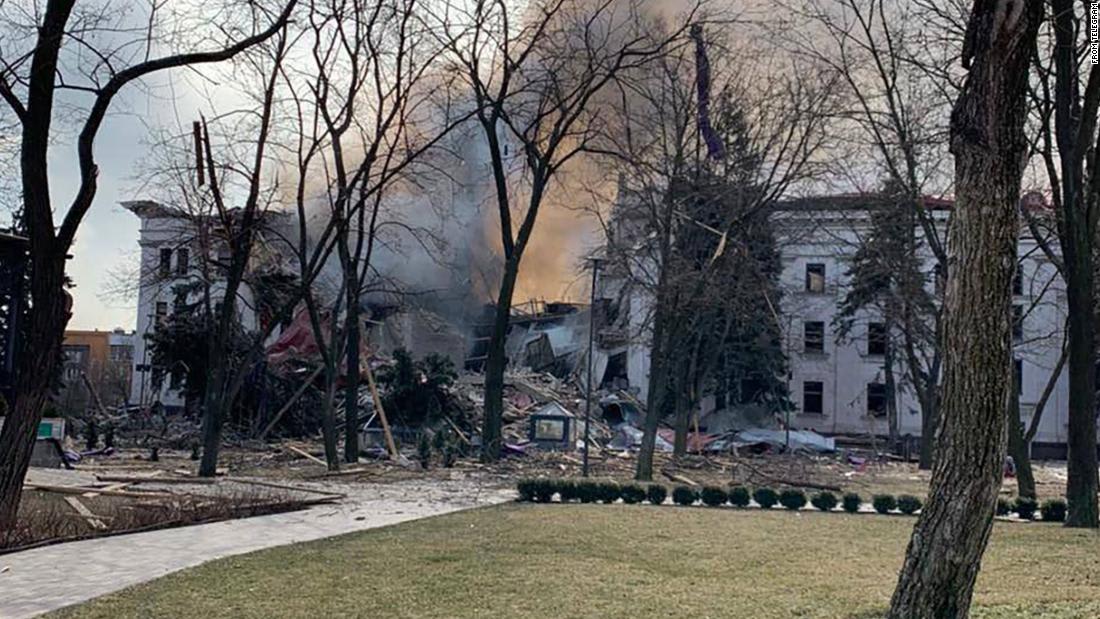 Survivors emerge from rubble of Mariupol theater bombed by Russia

Kyiv city council says 60 civilians, including four children, have died in the city since Russia began its attacks more than three weeks ago.

More than 160 Ukrainian military personnel and combatants have also died in the city. The council said 889 people have been injured, of whom 241 are civilians, including 18 children.

Additionally, 36 residential buildings, six schools and four kindergartens are among the buildings damaged in Russian strikes, the council said in a Facebook post.

According to the Kremlin readout, Putin outlined his assessments of the ongoing video talks between Russian and Ukrainian representatives.

“It was noted that the Kyiv regime is trying in every possible way to delay the negotiation process, putting forward more and more unrealistic proposals. Nevertheless, the Russian side is ready to continue the search for solutions in line with its well-known principled approaches,” the readout said.

The Russian President claimed that the Russian Armed Forces were doing everything possible to save the lives of civilians, including by organizing safe corridors for the evacuation of the population from cities in the combat zone.

The Kremlin said that the call was initiated by the German side.

During their hour-long call, Scholz repeated his call for a “ceasefire as quickly as possible," as well as an "improved humanitarian situation and progress in the search of a diplomatic solution," according to a tweet posted by Scholz's spokesman Steffen Hebestreit on Friday.

This is the third time Scholz and Putin have spoken since Russia’s invasion of Ukraine. The last conversation took place alongside French President Emmanuel Macron on March 12.

Kremlin spokesman Dmitry Peskov told journalists on a call the two leaders had a "difficult but business-like" discussion. "The conversation, of course, can hardly be called friendly. This was a tough conversation," he said.

"But nevertheless, there is a need for such contacts, exchange of information, discussion of sensitive topics related to the special operation."

The Court of Arbitration for Sport (CAS) upheld a ban on Russian football teams taking part in FIFA competitions while the court deliberates on the case, it said on Friday.

“The Challenged Decision remains in force and all Russian teams and clubs continue to be suspended from participation in FIFA competitions,” CAS said in a statement.

The decision means Russia cannot take part in 2022 FIFA World Cup qualifying playoff matches scheduled to be played at the end of this month, so won’t play in the tournament itself in Qatar.

Russia had been due to face Poland on March 24, but the suspension means Poland progress through to the next round and will face either Czech Republic or Sweden on March 29 for a spot at this year's World Cup.

CAS added that the arbitration proceedings continue and that a panel of arbitrators is currently being formed. No hearing date has yet been set.

Football is just one of a number of sports Russia has been suspended from. Read more here: 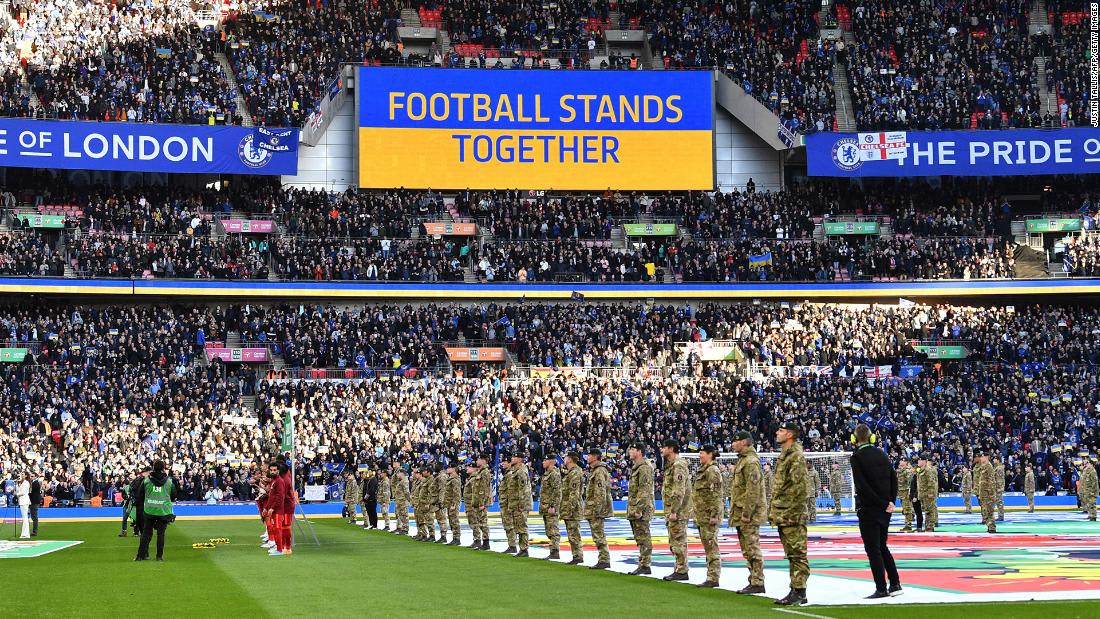 These are the sports that Russia has been suspended from

Ukraine’s armed forces say about 14,200 Russian soldiers have been killed since Russia began its invasion more than three weeks ago. It added that 450 Russian tanks and almost 1,450 other armored combat vehicles have been destroyed, along with 93 Russian aircraft and 112 helicopters.

Additionally, 205 Russian artillery systems have been destroyed, along with 72 multiple launch rocket systems and 43 anti-aircraft weapons systems, it said.

CNN is unable to verify these claims. Information from Russia is rarely forthcoming, and officials rarely report on its losses. The most recent figure seems to have been released on March 2, when Russia said 498 of its servicemen had died since the start of the campaign.

What we know: US estimates of Russian casualties range from between 3,000 to 10,000, according to information from US and NATO officials speaking to CNN. US and allied intelligence assessments vary widely as to exactly how many Russian forces have been killed to date, sources familiar with the intelligence tell CNN. But even the lowest estimates are in the thousands.

Ukraine says it is still waiting to hear a request from Russian authorities for the repatriation of the bodies of those killed.

Ukraine’s Deputy Prime Minister said the issue of collecting and identifying the bodies had been discussed in a meeting between Prime Minister Denys Shmyhal and the President of the International Committee of the Red Cross, Peter Maurer, on Thursday.

Russia fired six missiles at Lviv on Friday, the western city near the Polish border which has previously been relatively untouched by Russian attacks.

“There were some explosions. I looked away and then I saw a column of smoke rising,” Lviv resident Roman Demko told CNN.

Asked if he felt safe now bombing had started in the city, Demko said: “I don’t know. Where would I go?”

Some context: The projectiles aimed at Lviv were most likely cruise missiles fired from warplanes over the Black Sea, according to Ukrainian armed forces, two of which were intercepted by air defense systems.

Lviv’s mayor said missiles hit an aircraft repair plant near the airport. Work at the plant had stopped before the missiles hit and there were no reports of casualties at this stage, he said.

A CNN crew in Lviv heard multiple explosions at about 6:30 a.m. local time and smoke was seen rising from the direction of the Danylo Halytskyi International airport to the west of the city.