Conditions in Mariupol are "unbearable" and "just hell," residents who fled the besieged city in southeastern Ukraine told CNN, as shocking drone footage and satellite photos show the utter devastation wrought by the Russian bombardment.

Here's what we know about the situation:

Rarely in modern times has a political leader matched his moment so bravely.

But a tangible note of desperation is now lacing Ukrainian President Volodymyr Zelensky's inspirational rhetoric as he pleads for a more direct Western intervention to save Ukraine as merciless Russian President Vladimir Putin's troops lay waste to cities and bombard civilians.

The measures the warrior President says his country needs to survive — like NATO-enforced no-fly zones and Soviet-era jets from ex-Warsaw Pact states that are now part of the West — are seen by the Biden administration as a step too far because they could drag the US into a dangerous escalation with its nuclear-armed rival.

Zelensky's heartrending daily appeals, alongside the horrifying images of civilian casualties, are making it impossible to ignore the torment of Ukraine and its people.

If the worst happens and he ends up being killed and Ukraine falls, addresses like the one to US lawmakers will stand as an indictment of Putin's barbarism and of a global system that was unable to stop it. 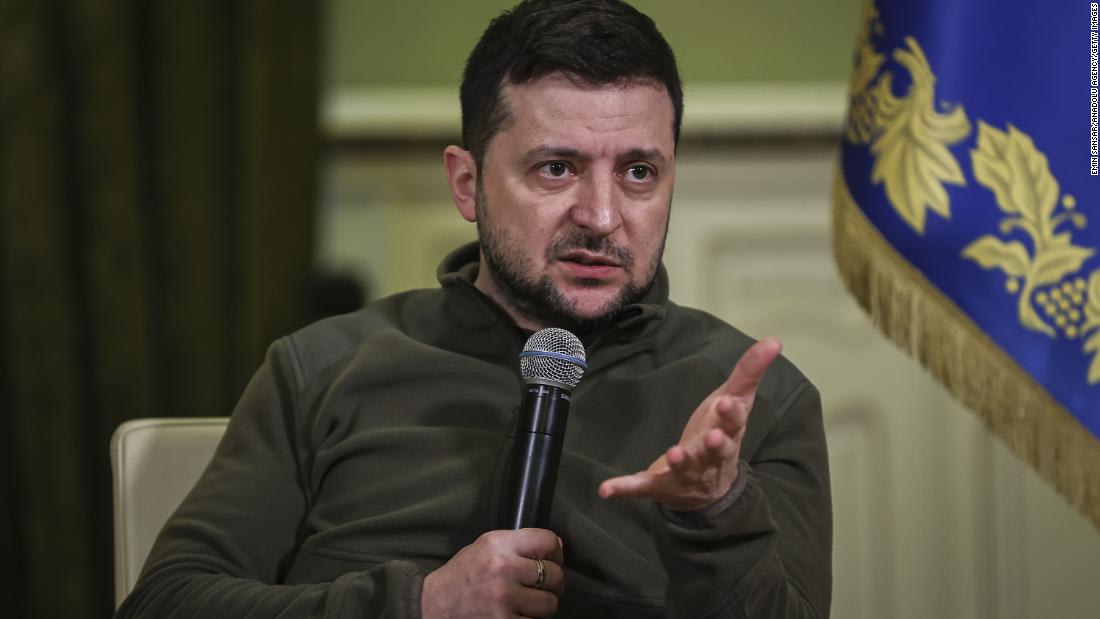 Analysis: Zelensky to appeal to Americans as Russia intensifies bombardments

Speaking at Noor Khan Airbase in the Pakistani capital as the planes departed, Qureshi said the aid was sent at the request of the Ukrainian Embassy in Islamabad.

Pakistan “wishes for the situation to settle down through dialogue and diplomacy,” Qureshi said, adding the aid is being sent on the basis of Pakistan’s “long history of good relations with Ukraine.”

Some context: Pakistan has not condemned the Russian invasion of Ukraine — abstaining from a vote of the UN General Assembly on March 2.

Pakistan's United Nations ambassador Munir Akram said at the time the country was "deeply concerned" by the war in Ukraine and "repeatedly stressed the need for de-escalation, renewed negotiations."

The heads of various foreign missions in Pakistan — including the EU, the US, the UK, Norway and Japan — previously issued a joint letter urging Islamabad to condemn Russia's invasion.

Russian President Vladimir Putin's full-scale invasion of Ukraine has done more to unify Western Europe than almost any event since the end of World War II.

Nations that were neutral have provided arms for Ukrainians; governments that had for years missed their NATO defense spending obligations have made spectacular U-turns; and countries that had deep economic ties to Russia have gone further in breaking the link than anyone had seriously envisaged little over a month ago.

The fate of the three Nordic nations that sit on the Scandinavian Peninsula — Norway, Sweden and Finland — has been brought into sharp focus by the crisis due to their unique relationship with each other, the rest of Europe and Russia.

It's these last two facts that have played a significant role in the major rethink of European security over the past three weeks: How can you have a policy of non-confrontation when you also simultaneously share an open land mass with Russia?

But that policy appears to be changing: Active conversations, once viewed by Sweden and Finland as a risky act of provocation against Russia, are now taking place in both countries about joining NATO. And, along with their neighbor Norway, both are throwing non-confrontation out the window.

"Finland and Sweden suddenly breaking long-held position(s) not to export arms to war zones and sending supplies to Ukraine has been the biggest shock for Europeans in terms of the Nordic response — and I suspect for Putin," said Charly Salonius-Pasternak, a leading researcher in global security at the Finnish Institute of International Affairs.

Faced with “continued personnel losses” in Ukraine, the Russian military is calling up reinforcements from across the entire country, according to the latest public intelligence assessment released Tuesday by the UK Ministry of Defence.

“Russia is increasingly seeking to generate additional troops to bolster and replace its personnel losses,” the UK assessment said.
“It is likely Russia is struggling to conduct offensive operations in the face of sustained Ukrainian resistance.”

The UK ministry said Russia was redeploying forces from as far away as "its Eastern Military District, Pacific Fleet and Armenia" and was increasingly tapping other sources of fighters such as "private military companies, Syrians, and other mercenaries."

“Russia will likely attempt to use these forces to hold captured territory and free up its combat power to renew stalled offensive operations,” the UK assessment said.

Ukrainian President Volodymyr Zelensky has dropped his clearest hint yet that he does not expect his country to join NATO anytime soon.

"For years we have been hearing about how the door is supposedly open (to NATO membership) but now we hear that we cannot enter. And it is true, and it must be acknowledged," he said during an address by video link to leaders of the British-led Joint Expeditionary Force.
"I am glad that our people are beginning to understand this and rely on themselves and on our partners who assist us."

Here's why Zelensky's comments are significant:

"Some states of alliance have intimidated themselves, saying that they can't answer. That they cannot collide with Russian missiles and planes in the Ukrainian sky. Because this, they say, will lead to escalation, will lead to the Third World War. … And what will they say if Russia goes further to Europe, attacking other countries? I am sure the same thing they say to Ukraine. Article 5 of the NATO treaty has never been as weak as it is now. This is just our opinion," Zelensky said.

New satellite image shows the destruction of Russian helicopters at an airport in Kherson while survivors and drone footage reveal the scale of devastation in the southern city of Mariupol.

There is a sole train line that runs between Ukraine and the station in the border town of Przemysl, Poland. The trains that go back and forth are a faded blue and yellow, the national colors of the besieged country.

The scene on Platform Five looked different this week. Thousands of refugees were still coming off the trains from Ukraine, mostly women and children looking for safety as Russian forces step up their attacks.

But the people waiting for the journey back across the border were no longer almost entirely male. This line was perhaps half full of women queuing to get back to the war zone.

Mariia Halligan told CNN she's going to her home city of Kyiv to be with her family and Canadian husband to fight, in her words, "Russian terrorists."

"If I have to do this, I will do it for my country, for my relatives, for my friends," she said, adding there was no room for her to be nervous.
"I'm not (a) man, I can't kill. I'm (a) woman and my work (is to) keep balance and help, and be kind, and care about relatives, family, friends and all Ukraine. But now I feel all Ukrainians (are) my relatives. And I hope that world society will help Ukrainians, all Ukrainians, because it's my family."

She clutched a paper heart, made for her in the blue and yellow colors of the Ukrainian flag by Polish children, who hoped it would be a good luck talisman.

Every woman in the line on this cool, cloudy day had their own reasons for returning to their country at war. But one theme seemed to connect almost every woman waiting to board the train. They view returning home to a war zone as an act of symbolic resistance to Russian aggressors.

Their faces looked determined, and the line was quieter than the emotional rush of people fleeing into Poland. 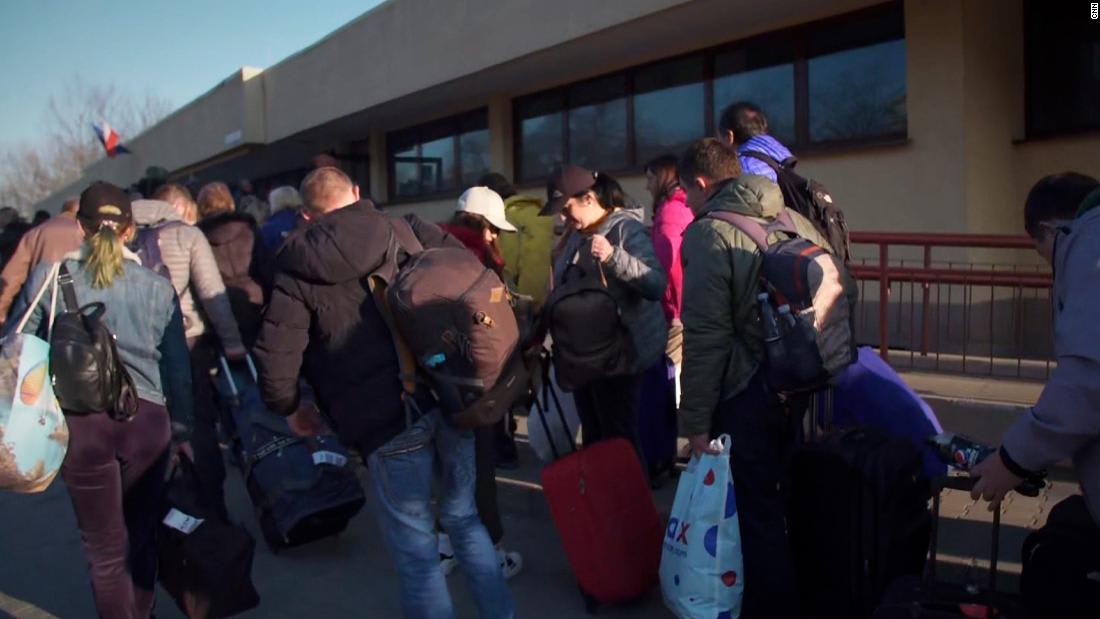 Ukrainian President Volodymyr Zelensky will deliver a virtual address Wednesday to US members of Congress, as Ukraine continues to press the United States for more assistance in its fight against Russia's unprovoked and deadly ongoing invasion.

Zelensky will appear via video conference and be introduced by House Speaker Nancy Pelosi after she gavels in the session. He is expected to speak for approximately 15 minutes.

Zelensky's remarks are set to air live at 9 a.m. ET.

Watch it here: A livestream of Zelensky's speech to Congress will be featured on CNN.com without requiring a login. CNN's special coverage of the speech will stream live for pay TV subscribers only via CNNgo (CNN.com/go and via CNNgo apps for Apple TV, Roku, Amazon Fire, Chromecast, Samsung Smart TV and Android TV) and on the CNN mobile apps for iOS and Android.

Pelosi and Senate Majority Leader Chuck Schumer announced the expected appearance in a letter to members on Monday, writing that "as war rages on in Ukraine, it is with great respect and admiration for the Ukrainian people that we invite all Members of the House and Senate to attend" the address.

Zelensky is likely to make fresh calls for steps like a no-fly zone and help acquiring fighter jets in his address to lawmakers.

President Joe Biden has so far rejected those steps as potentially dragging the US into conflict with Russia, but, according to the White House, the President is intent on demonstrating the support the US is providing and will detail it in a separate speech later Wednesday.

According to a US official, Biden is expected to announce an additional $800 million in security assistance for Ukraine, bringing the total pledged to $2 billion since the beginning of the Biden administration.