UK Cabinet minister Michael Gove said on Sunday that Britain wants to explore the option of using the homes and properties of sanctioned Russian individuals for humanitarian and other purposes.

When asked in an interview with the BBC if the homes of sanctioned oligarchs could be used to house Ukrainian refugees, Gove said, “There’s quite a high legal bar to cross and we are not talking about permanent confiscation, but we are saying ‘You’re sanctioned. You’re supporting Putin. This home is here, you have no right to use or profit from it and, more than that, while you are not using or profiting from it, if we can use it in order to help others let’s do that.'"

“In my view, it is the case that if your wealth and your influence is being deployed in order to support or provide comfort to Putin given what he is doing, then I’m afraid you have to bear the consequences," Gove said.

"The sanctions process involves us going through a rigorous analysis of just who should be subject to the sanctions," he said. "We’ve moved as rapidly as we possibly can but it seems to me that if we can use those assets for as long as someone is sanctioned in an appropriate way then we should."

Britain has sanctioned 800 of Russia’s most “significant and high-value individuals, entities and subsidiaries,” including banks, Putin’s inner circle, and oligarchs, according to the foreign office.

Polish President Andrzej Duda said on Sunday that if Russian President Vladimir Putin uses any weapons of mass destruction, it would be a "game-changer" and NATO would have to think seriously about what to do.

Speaking in an interview with the BBC, Duda said: "Of course, everybody hopes that he will not dare do that, that he will not use weapons of mass destruction, neither chemical weapons nor biological weapons, nor any form of nuclear weapons. Everybody is hoping that this is not going to happen."

He added: "But, as we say in Poland, using a little bit of an English expression, if he uses any weapons of mass destruction then this will be a game-changer in the whole thing."

When asked whether Putin using chemical weapons would be a "red line for NATO," Duda responded that "the North Atlantic alliance and its leaders, led by the United States, would have to sit at the table and they will really have to think seriously what to do -- because then it starts to be dangerous not only for Europe, not only for our part of Europe or our region, for central Europe, but for the whole world."

"I asked Lavrov’s support to evacuate our citizens," Cavusoglu said during a Sunday news conference in Antalya. "Phones are not working and clashes continue. We are hoping for a development today."

Cavusoglu said that the mosque was undamaged by a bomb that landed nearby and that buses were waiting to evacuate Turkish citizens from the mosque, adding that the Turkish Ministry of Foreign Affairs is in indirect touch with its citizens through contacts on the ground.

"The war turned into a street-by-street fight. It is too risky to evacuate people. A humanitarian corridor is needed," he added.

Ukraine's Foreign Ministry claimed on Saturday in a tweet that Russian shelling targeted the mosque of Sultan Suleiman the Magnificent and his wife Roxolana in Mariupol, where more than 80 adults and children were sheltering, including Turkish citizens.

On Sunday, Turkey's foreign minister said that, despite reports the mosque was bombed, the mosque remained undamaged and the imam of the mosque denied reports that it was shelled.

Further talks between Russia and Ukraine could take place next week, according to Mykhailo Podoliak, a senior adviser to Ukrainian President Volodymyr Zelensky.

"As soon as mutual counter legal formats are worked out, a meeting will be scheduled -- the fourth round of negotiations. It could be tomorrow, the day after tomorrow," Podoliak told Belta, the Belarus state news agency, on Sunday.

"There are various proposals on the negotiating table now, there are many of them, there are a dozen proposals, including on a political settlement and, most importantly, on a military settlement. I mean a ceasefire, a formula for a ceasefire and the withdrawal of troops," he said.

"It’s probably not necessary to go further and just have conversations. We discussed all the issues, now we are trying to pack these issues into some legal formats," Podoliak said.

On Saturday, Podoliak posted an update on talks on Twitter.

"Negotiations with the RF [Russian Federation] delegation are now ongoing in a continuous video format. Special working subgroups have been created," he wrote. "Ukraine's positions are determined by the previous directives."

Nine people have been killed in a Russian bombardment near Mykolaiv, southern Ukraine, the city's regional administration said Sunday.

Mykolaiv is a strategic southern city that has resisted Russian occupation and impeded an apparent Russian drive towards the major port of Odessa to the west.

Reports from the area say there was heavy shelling north of the city around Bashtanka.

In the city itself, the regional administration said an airstrike had destroyed a workshop but had caused no casualties.

A bus carrying around 50 Ukrainian nationals went off the road in Italy and overturned, leaving one dead and several injured, Italian firefighters said via Twitter on Sunday.

The accident took place on the A14 highway between Forli and Cesena, on the north-eastern coast.

Emergency services are currently on the scene, using two mobile cranes to lift the overturned vehicle, the firefighters said.

A further 134 people have been hospitalized due to injuries caused by the early morning missile strikes, it added.

More than 30 missiles fired from warplanes over the Black and Azov seas hit the military base, said Maksym Kozytsky, head of the Lviv regional military administration, in a statement posted to Facebook.

Ukraine Defense Ministry spokesperson Markiyan Lubkivsky said officials were still clarifying information, but so far there were no reports of foreign nationals among the casualties.

The site, which lies about 40 kilometers (25 miles) northwest of Lviv and less than 20 kilometers (12.5 miles) from the Polish border, is home to the International Peacekeeping and Security Center (IPSC).

The IPSC hosts training exercises with Western military personnel, including from the United States. Last fall, it held the Rapid Trident military exercise, a multinational Ukrainian-American military exercise, according to the official page of the General Staff of the Armed Forces of Ukraine.

India is temporarily relocating its embassy in Ukraine to Poland due to the "rapidly deteriorating security situation," India's Ministry of External Affairs (MEA) said in a statement Sunday.

"In view of the rapidly deteriorating security situation in Ukraine, including attacks in the western parts of the country, it has been decided that the Indian Embassy in Ukraine will be temporarily relocated in Poland," the statement said.

On March 1, India said it was setting up an embassy in Lviv, Ukraine after all its citizens were evacuated from the capital Kyiv due to the conflict.

On Sunday, the MEA said the embassy situation "will be reassessed in the light of further developments."

When thousands of Russians lined up in Moscow's busy Pushkin Square on January 31, 1990 to enter the country's first-ever branch of McDonald's, the moment represented a seismic cultural shift.

The Iron Curtain, which had divided Eastern and Western Europe for decades, had only just collapsed. Now the fast-food chain beloved by Americans and many others could serve up Big Macs to Russian customers.

Thirty-two years later, McDonald's decided to suspend its operations in Russia in response to Moscow's invasion of Ukraine, like numerous other big Western brands, including IKEA, H&M, Coca-Cola and Starbuck's.

Of course, Russians can choose to eat elsewhere and buy other goods -- many homegrown chains have sprung up across the vast country since the demise of the Soviet Union.

But the decision of these international brands to suspend trading in Russia -- following several rounds of punishing Western sanctions and massive public pressure on moral grounds -- still represents the end of an era.

"Coke, Pepsi, McDonald's were the symbols of westernizing Russia, Russia opening to the world. And the fact that these companies are leaving... signals and highlights the extent to which Russia is closing and turning inwards," said Gulnaz Sharafutdinova, a professor of Russian politics at King's College London's Russia Institute. 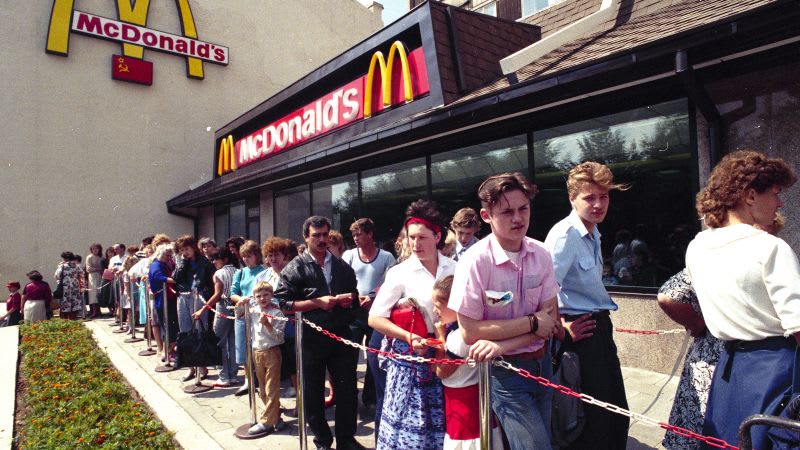