At least 13 evacuation corridors from different Ukrainian cities, including the besieged eastern city of Mariupol, will be open on Saturday for civilians, said Ukraine’s Deputy Prime Minister Iryna Vereshchuk.

“Today, a convoy with humanitarian cargo and buses for the evacuation of people (...) is departing from the city of Zaporizhzhia to the city of Mariupol, Donetsk Region, through the following populated localities: Zaporizhzhia, Melitopol, Vasylivka, Berdyansk, Mangush, Mariupol, with mandatory mine sweeping along the entire route,” Vereshchuk said Saturday in a video message.

“I very much hope that today will be a success, all the planned routes will be open and Russia will adhere to the ceasefire obligations it took on,” Vereshchuk added.

In a separate interview with Ukrainian state TV Saturday morning local time, Interior Ministry adviser Vadym Denysenko said he “hopes” the corridors “that were supposed to open yesterday will open today,” including the one for Mariupol.

This would be the sixth attempt to establish a route from Mariupol, as previous efforts to evacuate residents have largely failed.

Ukrainian authorities reported limited success in securing the evacuation of Ukrainian civilians from the other worst-affected areas Friday.

Vova doesn't know there is a war raging right outside his window.

He doesn't understand the meaning of the air raid sirens. He is unaware of the destruction caused by Russian bombs dropping on Kyiv. He just wants to build towers with his toy blocks and press the buttons on his mom's phone that make it play songs and cartoons he likes.

Vova, a pet name for Volodymyr, is 17 and has Opitz-Kaveggia syndrome, a rare genetic condition that causes severe intellectual disabilities. He needs round-the-clock care and anti-seizure medication that has become impossible to obtain as Russian troops close in on the Ukrainian capital, according to his mother, Natalia Komarenko.

"We can't take him by train, because at any moment he may have a seizure and his temperature may rise. He may not always voice his need to go to the bathroom, and he can't be left unattended even for a minute," Komarenko said, adding that driving is also dangerous, in case he has a seizure.

Vova and his family are among thousands of Kyiv families that cannot leave the city because of health conditions that make travel extremely risky.

Komarenko heads a charitable foundation called Z teplom u sertsi (Ukrainian for "With Warmth in the Heart"). The group brings together and creates support networks for Kyiv families living with disabilities. Only 20 to 50 of the 1,247 families in the group -- around 260 people in all -- have been able to flee the capital, according to Komarenko.

The European Disability Forum, a pan-European NGO, estimates there are 2.7 million people with disabilities in Ukraine. According to Inclusion Europe, another NGO, there are around 261,000 people in Ukraine with intellectual disabilities that make them extremely vulnerable to the conflict.

At least 100,000 of them, mostly children, live in care homes and institutions. Their chances of getting out of the country are slim.

Yet another attempt is being made Saturday to get humanitarian aid into the besieged southeastern city of Mariupol and bring thousands of civilians out.

The city has been under heavy fire from Russian forces for more than a week, and the city council said Friday nearly 1,600 people had been killed.

On Saturday the council announced that "a green corridor is open. A humanitarian convoy departed from Zaporizhzhia to Mariupol. More than 90 tons of food and medicine are going to the city, which is under siege for 11 days."

The council said that, for the second consecutive day, priests of the Orthodox Church had joined the convoy.

The Mariupol "green corridor" is one of several announced by the Ukrainian government in order to get humanitarian aid into areas worst affected by the fighting and help thousands of people to leave areas without power and water and under heavy shelling.

City under siege: Routes from Mariupol and Volnovakha have been repeatedly blocked or inaccessible over the past week. On Friday, Oleksii Reznikov, the Defense Minister, described the situation in Mariupol as very difficult. He accused the Russians of bombing the city even during official negotiations.

Doctors without Borders (MSF) on Friday warned of an “extremely dire” humanitarian situation in the city where their teams report "that many families do not have enough water, food, and medicine."

With Russia's war in Ukraine now in its third week, US and European officials have little optimism that the diplomatic channels can deliver a way out of the conflict at this point.

The US and its allies have enacted crippling sanctions on Russia in response to its invasion of Ukraine, and US President Joe Biden has kept in touch with European leaders as well as Ukrainian President Volodymyr Zelensky. But US officials have privately acknowledged they don't believe any of these sanctions are going to change Putin's thinking, and many don't believe Russia's losses in Ukraine will either.

Several hundred people protested outside the city hall in the southern Ukrainian city of Melitopol after the arrest of the mayor Ivan Fedorov by Russian forces Friday.

"Freedom for the Mayor" and "Fedorov," chanted the crowd, according to a short video by Ukrainian state TV on its Facebook page. It reported that more than 2,000 people flocked to the occupied building demanding the official's release

Russian forces occupied Melitopol within days of the invasion beginning in late February, but the city has seen sporadic protests since.

This comes after Fedorov was seen on video Friday being led away from a government building in the city by armed men. A short time later, the Russian-backed Luhansk regional prosecutor claimed that the mayor had committed terrorism offenses and was under investigation.

Today in Melitopol the invaders captured mayor of the city, Ivan Fedorov, a mayor who courageously defends Ukraine and the people of his community. Obviously, this is a sign of the weakness of the invaders. They did not find any support on our land, although they counted on it. Because for years they've been lying to themselves that people in Ukraine were supposedly waiting for Russia to come," he said.

Russia's richest businessman has warned the Kremlin against confiscating assets of companies that have fled in the wake of the invasion of Ukraine, saying such a step would set the country back more than 100 years.

Vladimir Potanin, president of metals giant Norilsk Nickel (NILSY) and its biggest shareholder, said that Russia risked returning to the tumultuous days of the 1917 revolution if it slammed the door on Western companies and investors. He urged the Russian government to proceed with extreme caution regarding the seizure of assets.

Firstly, it would take us back a hundred years, to 1917, and the consequences of such a step — global distrust of Russia on the part of investors — we would experience for many decades," he said in a message posted on Norilsk Nickel's Telegram account on Thursday.

"Secondly, the decision of many companies to suspend operations in Russia is, I would say, somewhat emotional in nature and may have been taken as a result of unprecedented pressure on them from public opinion abroad. So most likely they will come back. And personally, I would keep such an opportunity for them," he added.

Potanin is Russia's wealthiest billionaire and still worth about $22.5 billion, according to Bloomberg, despite losing about a quarter of his fortune this year as shares in Norilsk Nickel crashed. The company's shares lost more than 90% in London trading before they were suspended this month, despite soaring prices for its commodities. 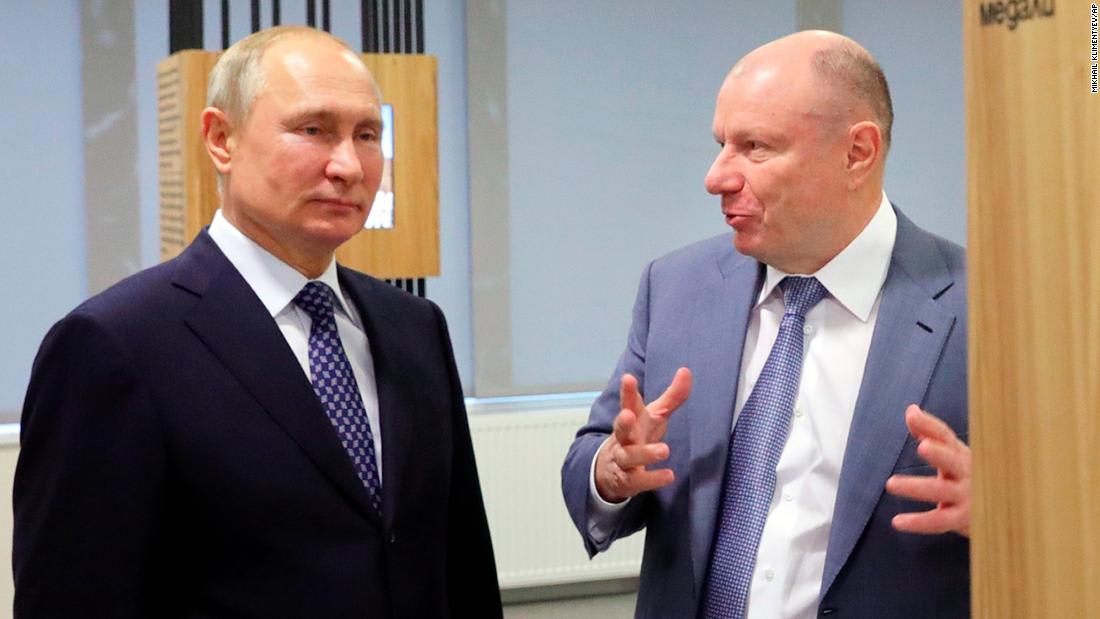 Russia's richest businessman tells Putin: Don't take us back to 1917

A frozen goods warehouse caught fire early Saturday morning due to shelling in Brovary district, northeast of Kyiv, according to Ukraine's Interior Ministry.

The shelling happened in the village of Kvitneve about 3:30 a.m. local time (8:30 p.m. ET Friday), the ministry said. Preliminary reports show there were no casualties.

The bulk of Russian ground forces are currently about 25 kilometers (15.5 miles) from the center of the Ukrainian capital, Kyiv, the UK's Ministry of Defence said Saturday in its latest intelligence assessment.

Fighting north-west of Kyiv continues with the bilk of Russian ground forces now around 25 kilometers from the center of the city," the ministry said.

"Elements of the large Russian column north of Kyiv have dispersed. This is likely to support a Russian attempt to encircle the city. It could also be an attempt by Russia to reduce its vulnerability to Ukrainian counter attacks, which have taken a significant toll on Russian forces," the ministry said.

CNN teams in Kyiv reported explosions in the early hours of Saturday morning, but it's unclear whether the explosions were Russian or Ukrainian strikes.

The other key cities of Kharkiv, Chernihiv, Sumy and Mariupol remain encircled by Russian forces, the ministry added.

In the midst of a days-long, chaotic cross-country train ride to the northwestern city of Lviv, near Ukraine's border with Poland, a terrible realization dawned on Marina.

The 54-year-old carer, who managed to evacuate an orphanage in a besieged industrial town in the eastern Luhansk province, had no way to return to her own family.

Marina, who did not give her surname, was still reeling from the journey — days spent desperately trying to calm the panic-stricken children in her care against the backdrop of booms and thuds of Russia's brutal assault, while still fearing for her family at home.

"And now I am all alone," Marina told CNN from a daycare center-turned-shelter in Lviv, where she and the children from her orphanage were camped out. "I have left my own (adult) children to save the children in the orphanage."

CNN is not disclosing Marina's full name because of the risks to her family who have not been evacuated.

Families separated: The fracturing of families underpins many of the stories of displacement in Ukraine, with millions of people trapped in besieged cities with virtually no way out.

Several people CNN spoke to in recent days said they have been unable to contact their loved ones since the start of the invasion. They described frenzied escapes from the country's worst-affected cities, in which parents, spouses, siblings and grandparents were left behind.

With the Russian assault knocking out power and telephone networks, whole cities have been cut off from the outside world. Many say they don't know if their loved ones are still alive.

"I don't understand why the government didn't try to evacuate us before the invasion started," Marina said. "I don't want to blame them. Still, I can't help but think my predicament could have been avoided."

For loved ones ripped apart by war in Ukraine, phone messages bring hope and despair