Russia's defense minister has said that its invasion of Ukraine is being carried out successfully, despite claims from Western leaders that Russia's military has encountered unplanned obstacles and resistance.

“All is going according to the plan, we report to you here every day this week,” Sergei Shoigu told Russian President Vladimir Putin at a televised Security Council Meeting on Friday.

Shoigu also claimed that the Russian army has received over 16,000 applications from volunteers in the Middle East wanting to join the war in Ukraine.

We receive a huge number of applications from all sorts of volunteers from different countries who would like to come to the Luhansk and Donetsk People's Republics in order to participate in what they consider to be the liberation movement."

The defense minister also asked Putin for more weapons to arm the separatist regions of Donbas; in particular, air defense systems, including MANPADS, along with light anti-tank missile launchers.

Shoigu added: “We have accumulated a large number of Ukrainian weapons: tanks, armored vehicles and all types of small arms, quite a lot of artillery. In addition, there are many Javelin and Stinger complexes. It is also proposed to transfer this to the Luhansk and Donetsk republics, to the militia, so that they can more effectively carry out the defense of their republics.”

Putin supported both suggestions saying Russia needs to help volunteers willing to fight in Donbas get transferred to the front lines.

“If you see that there are people who want on a voluntary basis, especially not for money, to come and help people living in Donbas, well, we need to welcome them and help them move to the war zone,” Putin said.

Read more on the situation on the ground here: 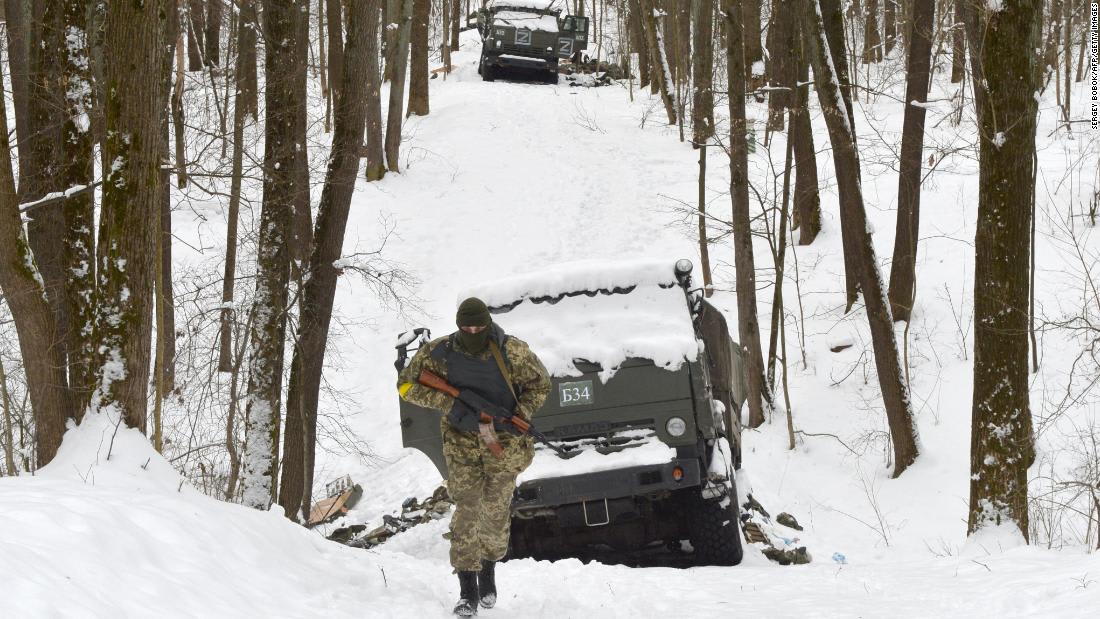 The UN High Commissioner for Refugees, Filippo Grandi, said Friday that the number of people who have fled from Ukraine has now hit 2.5 million.

"The number of refugees from Ukraine — tragically — has reached today 2.5 million," Grandi said on his official Twitter account.

"We also estimate that about two million people are displaced inside Ukraine. Millions forced to leave their homes by this senseless war," he said.

More than 1.5 million of those who have left have gone to Poland, Polish President Andrzej Duda said on Thursday.

Over 110,000 refugees have also arrived in Germany from Ukraine since the beginning of the Russian invasion just over two weeks ago, according to Germany's interior ministry.

German Federal Police registered 109,183 refugees -- including more than 13,270 people from the day before, Germany's interior ministry said in a statement on Friday.

However, due the absence of border checks between Poland and Germany, where most Ukrainian refugees are coming from, the actual number of incoming people could be significantly higher, the ministry added.

European Union leaders will vote Friday on doubling the bloc's financial support for the Ukrainian Armed Forces, its foreign policy chief Josep Borrell said Friday. He was speaking to journalists ahead of the second day of an EU leaders’ summit in Versailles, France. If approved by the leaders, this will bring the bloc’s financial support to the Ukrainian military to over $1 billion.

Everyone was completely aware that we have to increase our military support to Ukraine to continue putting pressure on Russia, so, $550 million more,” he said.

It wasn’t difficult to convince EU leaders to take the step, he said, which will come via the European Peace Facility scheme. Borrell said he is sure that the European Union Council will confirm the proposal this morning.

The financial support will be “immediate,” Borrell said, “now the money flows quickly.”

On February 28, the Council of the European Union agreed to help fund the Ukrainian Armed Forces, including lethal equipment, for the first time.

The Russian army was poorly prepared for its invasion of Ukraine and is now facing many difficulties on the ground, “particularly in the logistical field and in the field of intelligence,” French armed forces spokesperson Pascal Ianni told French TV station France2 on Friday.

“It is possible that an attack on Kyiv will be carried out in the next few days, but actually taking control of Kyiv is a whole other matter and will take a long, long time,” he said, pointing to the Russian army’s “reserve problem.”

The Russian army is also caught up in a premature spring,” he added, with the defrosting ground causing mobility issues for the military.

A 40-mile-long Russian convoy had previously been advancing on the capital for days, but new satellite images released on Thursday showed that it had largely dispersed and been redeployed.

Ukraine is trying to open evacuation corridors in several regions on Friday, according to the country's Minister of Reintegration Iryna Vereshchuk.

The planned routes include:

Routes from Mariupol and Volnovakha have been repeatedly blocked or inaccessible over the past week amid heavy fighting and shelling by Russian forces. There has been more success in evacuating people from Izium, which has seen widespread destruction.

These routes have not been agreed with Moscow, which announced different routes leading into Russia.

Vereshchuk said further attempts would be made to allow people to escape fighting around Kyiv, with routes from the capital to destinations including Bucha, Hostomel, Kozarovychi and Mykulychi.

Routes were also announced near Zhytomyr, west of Kyiv, opening corridors to Andriyivka, Makariv, and Borodianka.

Some context: About 100,000 people were evacuated via evacuation corridors in several parts of Ukraine over the past two days, President Volodymyr Zelensky said Thursday.

The United Kingdom's Ministry of Defense said on Friday that Russian forces continue to make “limited progress” in advancing toward Kyiv — but could be preparing for a fresh attack against the Ukrainian capital in the coming days.

“It remains highly unlikely that Russia has successfully achieved the objectives outlined in its pre-invasion plan,” the ministry said in an intelligence update. “Logistical issues that have hampered the Russian advance persist, as does strong Ukrainian resistance."

“Russia is likely seeking to reset and re-posture its forces for renewed offensive activity in the coming days. This will probably include operations against the capital Kyiv,” it said.

The images show that some elements of the convoy have "repositioned" into forests and treelined areas near Lubyanka, Ukraine, according to Maxar.

The detention of basketball player Brittney Griner in Russia — where she has been held for three weeks on allegations of drug smuggling — is really "unusual and extremely concerning," US Representative Colin Allred of Texas said Thursday.

Allred said the US Embassy has requested consular access to the WNBA star, "the same way they would for any American who's detained or incarcerated overseas, and that has been denied now for three weeks."

Russia's invasion of Ukraine "does loom over the entire issue" of getting Griner back to the United States, Allred added.

"For Brittany's sake, we don't want her to become a part of this kind of political battle that's going on, and we want to make sure that her rights are respected and that we are able to get access to her, and that she can ... get home as quickly as possible," Allred said.

"(Griner's family) should just know that our government, the State Department, folks like myself in Congress on the Foreign Affairs Committee, we're gonna do everything we can to get her home, to get any other American who's been detained unjustly home," he said.

CNN has reached out to Russian officials, the US Embassy in Moscow, and the US State Department for comment on Griner's consular access but has not heard back.

At least one person was killed by explosions in the Ukrainian city of Lutsk on Friday, the city's mayor Ihor Polishchuk said on his official Facebook page.

"Today at approximately 5:45 there were three explosions. Three missiles hit our military airfield. There is one dead. Information about the injured is being clarified. The SES (State Emergency Service) is working on the spot," he said.

The city's alert system "did not work at all," and the "military administration and the military will work on this issue," he added.

In the western city of Ivano-Frankivsk, an airfield was also hit and the warning system didn't work, Polishchuk said.

"The Armed Forces of Ukraine did not turn it on. Why didn't they turn it on? Because the missiles were flying at ultra-low speeds or for some other reason, the military will work on it."

He added: "Please do not stand by the window during the explosions, do not take photos and videos and then do not publish them on social networks, because the enemy is tracking all these messages. This is additional information for the enemy. If there are explosions, please proceed to the shelter."

Major Ukrainian cities including Dnipro and Lutsk are being "subjected to devastating blows," said Mykhailo Podoliak, an adviser to the head of the Ukrainian President's office on Friday.

Explosions shut down two boiler houses in Lutsk, located in the far west near the Polish border, while three major explosions were reported in the western city of Ivano-Frankivsk, he wrote on Twitter.

"Dnipro is also under attack," he added. "Russia's destructive war against civilians and major cities continues."

The Lutsk mayor reported explosions at an airfield in the city, according to the Ukrainian news agency UNIAN. Lutsk has not been attacked before.

"Explosions in the direction of the airfield. Everyone in the shelter!" Mayor Ihor Polishchuk is quoted as saying.

Cities under siege: Ukraine's Emergency Service said one person in the city of Dnipro died on Friday after three airstrikes in the early morning that hit a kindergarten, an apartment building and a two-story shoe factory.

The airstrikes happened at around 6:10 a.m. local time in the Novokodatskyi district of the city, the Emergency Service said.