Russian Maj. Gen. Andrei Sukhovetsky was killed while fighting in Ukraine, according to a statement from the Novorossiysk city government in Russia on March 3.

In the statement, the government said Sukhovetsky — the deputy commander of the 41st Combined Arms Army of the Russian Ground Forces — died on Feb. 28 "while performing a combat mission during a special operation in Ukraine."

Sukhovetsky had previously served in the Russian military during operations in the North Caucasus region and Syria, the statement said.

President Joe Biden will announce Friday that the US, along with the G7 and European Union, will call for revoking "most favored nation" status for Russia, referred to as permanent normal trade relations in the US, sources familiar with the move tell CNN.

The move requires an act of Congress.

Biden will make the announcement Friday and Congress then is expected to introduce legislation. 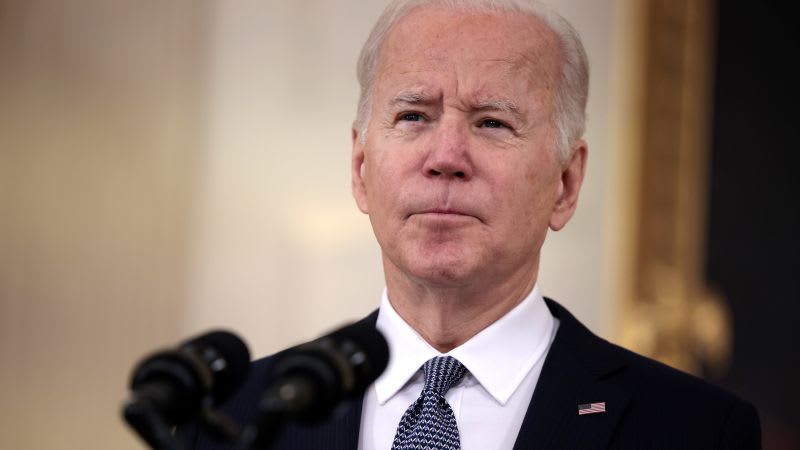 Ukraine has lost all communications with the Chernobyl nuclear power plant, the International Atomic Energy Agency (IAEA) said in a statement Thursday.

The statement comes a day after the Russian-controlled site lost external power supplies.

Power to the site: IAEA chief Rafael Mariano Grossi said the United Nations' nuclear watchdog is aware of reports that power has been restored to the site and is looking for confirmation.

Earlier on Thursday, Ukraine’s regulatory authority told the IAEA that emergency generators were providing electricity to the Chernobyl plant.

“The subsequent loss of communication meant that the regulator could no longer provide updated information about the site to the IAEA,” the statement read.

IAEA cited the Ukrainian regulatory authority, saying: “According to the information received before the loss of communication, both of the site’s power lines had been damaged, in effect disconnecting it from the grid.”

Effect of the disconnection: The IAEA statement said the disconnection from the grid “will not have a critical impact on essential safety functions at the site, where various radioactive waste management facilities are located, as the volume of cooling water in the spent fuel facility is sufficient to maintain heat removal without a supply of electricity.”

According to the IAEA, Ukraine’s regulator said eight of the country’s 15 reactors remained operating, including two at the Zaporizhzhia nuclear power plant, three at Rivne, one at Khmelnytsky and two at South Ukraine. Radiation levels at the four sites were normal, it said.

Grossi also said the IAEA is in touch with Ukrainian authorities about radiation monitoring systems in Ukraine.

The IAEA has not been able to re-establish communication with the monitoring systems installed to monitor nuclear material and activities at the Chernobyl and Zaporizhzhia facilities following the loss of remote data transmissions from those systems.

The northwest suburbs of the Ukrainian capital, Kyiv, and parts of the northern city of Chernihiv have sustained significant damage, new satellite images from Maxar Technologies show.

Satellite images taken on Thursday show fuel storage tanks on fire at the Russian-controlled Antonov Airbase in Hostomel, a northwest suburb of Kyiv. A thick black plume of smoke can be seen rising from the tanks, which are located on the southern end of the airbase.

In Chernihiv, roughly 80 miles (130 kilometers) northeast of Kyiv, the Epicenter K supermarket has also been destroyed by fire, the images show. The charred remains of the building can be seen — but there is no roof.

A fire is also seen burning in one of Chernihiv's industrial districts, located on its south side.

With the clouds temporarily clearing around the Ukrainian capital, new satellite images taken earlier on Thursday show that the Russian military convoy northwest of Kyiv that stretched more than 40 miles (64 kilometers) has "largely dispersed and redeployed," Maxar Technologies says.

Just north of the Antonov Airbase in Hostomel, Ukraine, Russian military vehicles are seen sitting on roadways in residential areas in the town of Ozera — 17 miles northwest of Kyiv.

Towed artillery and other vehicles are seen taking cover in a sparse patches of trees near Lubyanka — about 3 miles northwest of the Antonov Airbase.

In Berestyanka — 10 miles west of the airbase — a number of fuel trucks and, what Maxar says, appears to be multiple rocket launchers are seen positioned in a field near trees.

Southeast of Ivankiv — the end of what was the 40+ mile convoy — a number of trucks and equipment are still seen on the roadway.

Ukrainian President Volodymyr Zelensky said Thursday about 100,000 people have been evacuated via humanitarian corridors over the past two days.

“One of the main tasks for us today was the organization of humanitarian corridors," Zelensky said in a video address posted to Facebook late Thursday night. "Sumy, Trostyanets, Krasnopillya, Irpin, Bucha, Hostomel, Izium. Almost 40,000 people have already been evacuated this day. They were given safety at last. In Poltava, Kyiv, Cherkasy, Zaporizhzhia, Dnipro, Lviv."

He said humanitarian aid, food and medicine was delivered.

“We are doing everything to save our people in the cities that the enemy just wants to destroy,” Zelensky said.

Mariupol and Volnovakha, however, remain completely blocked, he said, adding that despite Ukrainian officials’ best efforts to make the corridor work, “Russian troops did not cease fire.” Regardless of this, Zelensky said he still decided to send a convoy of trucks carrying food, water and medicine.

“But the invaders started a tank attack exactly in the area where this corridor was supposed to be. Corridor of life. For the people of Mariupol," the president said.

"Right now, the air bombardment of Mariupol is underway," said Petro Andryushchenko, the adviser to the mayor of Mariupol.

“They did it consciously. They knew what they were disrupting. They have a clear order to hold Mariupol hostage, to torture it, to carry out constant bombardment,” Zelensky said.

He added: “Today they destroyed the building of the main department of the State Emergency Service in the Donetsk region. Right next to this building was the place where Mariupol residents were to gather for evacuation”

Earlier in the day, the mayor of Mariupol, Vadym Boychenko, also issued a furious video message condemning what he calls Russia's "cynical and destructive war against humanity" and said every 30 minutes the city was invaded by Russian forces. The mayor said humanitarian aid cannot get through to Mariupol for the sixth day in a row.

Zelensky noted that the state would continue trying to bring Mariupol the aid its people “so desperately need.”

Vice President Kamala Harris sought to reinforce cooperative ties between the United States and Poland as she met with the country's President in the wake of an apparent disconnect between the two NATO members over providing Ukraine with fighter jets.

"I want to be very clear. The United States and Poland are united in what we have done and are prepared to help Ukraine and the people of Ukraine, full stop," Harris said alongside Polish President Andrzej Duda during a joint news conference.

It was a diplomatic response to a situation that had angered some US officials and complicated Harris' visit. In Warsaw, Harris is acting as an emissary of US resolve to protecting its NATO allies on the eastern flank, and she underscored that commitment to the region's security by announcing the delivery of two new Patriot missile systems to Poland.

She also pledged more humanitarian support, announcing $53 million in new assistance and saying the US would help countries like Poland where massive numbers of refugees have fled the fighting. She met later in the day with seven people the White House described as "displaced" and said the conversation would inform policy decisions back home.

"You've been through so much. And the people at this table represent well over a million people," she said.

But at least in terms of military assistance to Ukraine, Harris didn't offer any commitments beyond what the United States is already providing, including Javelin and Stinger missiles.

The dust-up over providing fighter jets to Ukraine ultimately became moot when the Pentagon flat-out rejected the idea of transferring them at all, citing logistical and strategic concerns. But that was only after the awkward episode of Poland's offer to deliver the jets to the US — who could then provide them to Ukraine — left White House officials surprised and, to some extent, annoyed. 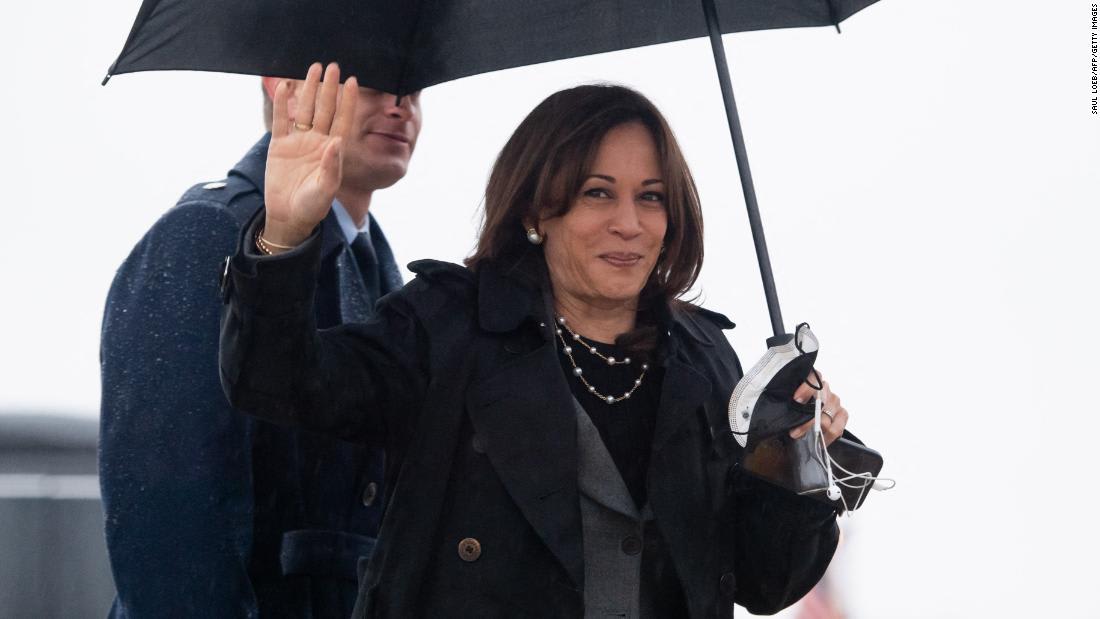 An injured woman, heavily pregnant, is carried on a stretcher past the smoldering wreckage of Mariupol's maternity and children's hospital. Her face is pale, one hand cradles her belly in a protective gesture. Every window on that side of the building appears to be blown out; wreckage litters the ground around it.

The searing image was taken following a Russian airstrike on the hospital Wednesday that injured 17 people, including children, women and doctors, according to Mariupol city officials. "Three died, among them one child, a girl," the city council said Thursday.

The city in southeastern Ukraine has been besieged by Russian forces for days, its trapped residents forced to shelter underground, melt snow for water and scavenge for food. Now, even a hospital caring for pregnant women, newborns and children is not safe.

Mariupol's hospital wasn't the only children's medical facility that was damaged by Russian forces on Wednesday. Two hospitals in Zhytomyr, west of the capital, Kyiv, had their windows blown out in a Russian airstrike on a thermal power plant and civilian building in the city, the mayor said. One of them was a children's hospital. There were no casualties and everyone was in a bomb shelter, according to the city's mayor, Serhii Sukhomlyn.

The rules of war specify that civilians should not be targeted and that medical workers, medical vehicles and hospitals dedicated to humanitarian work cannot be attacked.

But in the past two weeks Russian forces have repeatedly struck medical facilities in Ukraine, prompting claims they are being systematically targeted, despite Russian denials.

According to the World Health Organization (WHO), there have been 24 verified attacks on health care facilities in Ukraine so far.

"These attacks have led to at least 12 deaths and 17 injuries. At least 8 of the injured and 2 of the killed were verified to be health workers. The attacks took place between 24 February and 8 March," WHO said Thursday.
"WHO strongly condemns these attacks. Attacks on health care violate international law and endanger lives. Even in times of conflict, we must protect the sanctity and safety of health care, a fundamental human right," it said in an email to CNN. 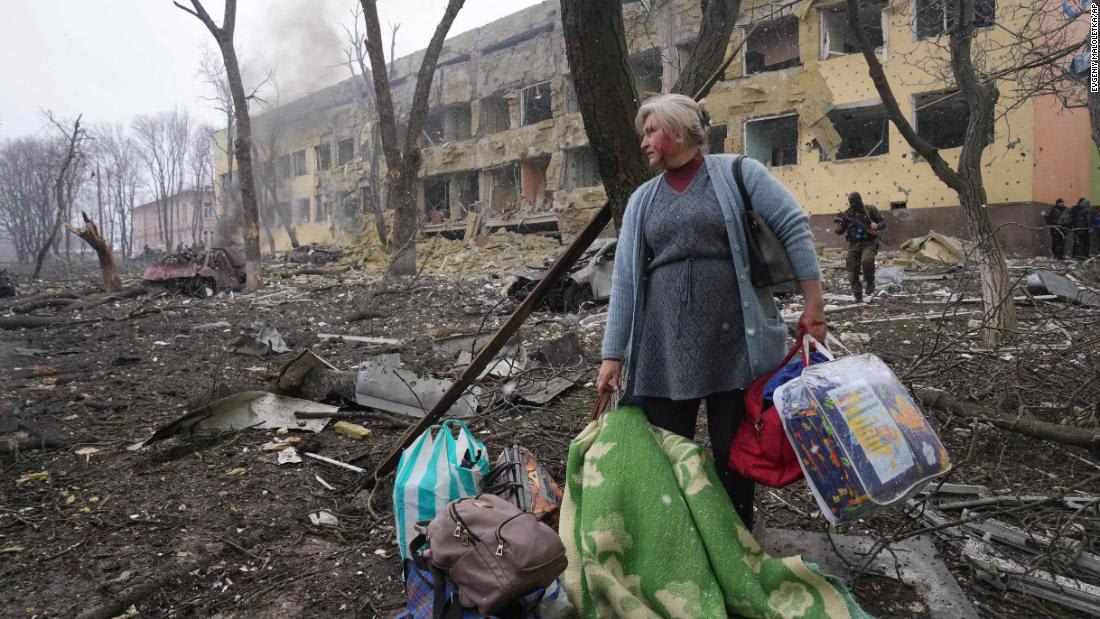