Wladimir Klitschko, a member of Ukraine's territorial defense forces, former boxing champion and brother of Kyiv’s mayor, told CNN that Russian troops have been attacking areas in the entire country of Ukraine today, with their main target being the capital of Kyiv.

He said the will of the Ukrainian people remains strong but they need support.

"This is important to understand to the Western world and our allies to act now. We cannot wait for weeks or months for certain decisions. It's about hours and minutes. We need support — financial, humanitarian, military equipment. We're going to take care of ourselves, trust us," he added.

Russian forces launched multiple missile attacks early Friday on a wide range of targets across Ukraine, causing substantial damage in and around the central city of Dnipro, and also attacking airports in the far west of the country, which had previously been spared from the conflict.

There was substantial damage to the airport at Lutsk in northwestern Ukraine, some 70 miles from the Polish border. The Governor of Volyn region said four missiles had been fired from a Russian bomber and two people were killed. Plumes of smoke also rose from the military airfield at Ivano-Frankivsk, western Ukraine, which was struck by missiles.

The military airfields in Lutsk and Ivano-Frankovsk were put out of action."

Closer to Kyiv, fighting has intensified to the northeast and east of the capital, after the Ukrainians successfully intercepted and attacked an advancing Russian tank column on Thursday. That front is still very active.

An overnight airstrike in the Brovary district just east of Kyiv caused no casualties, according to Kyiv authorities.

Ukrainian authorities also reported a missile strike in the town of Baryshivka overnight, some 45 miles east of the capital. According to authorities, 60 apartments were damaged along with four apartment buildings and 10 houses.

According to Ukraine's Operational Command East, a missile strike on the outskirts of Dnipro killed one civilian and damaged a primary school building, apartment buildings and a shoe factory.

"All components of Ukraine's defense forces, state authorities and local governments are working to eliminate the consequences of another missile attack on Ukraine's civilian infrastructure and provide assistance to the victims," it said.

The Russian column that had sat for nearly two weeks outside Kyiv has now dispersed, according to Maxar satellite imagery from Thursday. The forces appear to be regrouping.

Thomas Bullock, senior analyst at Janes, told CNN that, "Ukraine’s tactic of targeting supply lines has worked well especially during the first 5-10 days of the war. This was partially down to Ukrainian tactics and partially down to how Russia was operating."

"During the first couple of days of the war Russian forces appear to have prioritized rushing forward to secure objectives quickly. This means they weren’t advancing as a coherent frontline securing territory as they go," he said.

"This effectively allowed Ukrainian forces to slip behind Russia’s advanced mechanized units and attack logistics columns traveling on unsecured roads in the rear.

"It’s unclear how effective this tactic will be as Russia begins to reorient its forces for a longer war following their failure to secure a quick victory," Bullock added.

US President Joe Biden will announce Friday that the US, along with the G7 and European Union, will call for revoking "most favored nation" status for Russia, referred to as permanent normal trade relations in the US, sources familiar with the move tell CNN.

Biden is set to deliver remarks at 10:15 a.m. ET from the White House.

The move requires an act of Congress.

CNN reported Thursday that bipartisan talks in the Senate had been taking shape to take more aggressive action on Russia's trade status — after the White House effectively watered down the House-passed bill banning importing Russian oil, natural gas and coal into the US.

The earlier version of the legislation had included a provision that would suspend permanent normal trade relations for Russia and Belarus. But the White House expressed concerns over that part of the bill, and ultimately it was excised. The bill banning Russian energy imports that passed the House Wednesday night instead simply called for a review of Russia's status in the World Trade Organization.

Senate Finance Chairman Ron Wyden, a Democrat of Oregon, told CNN that he was engaging in talks with the top tax writers in Congress and the Biden administration about the matter, as pressure grew to include tougher language in the House bill when the Senate takes it up — as soon as next week.

Western sanctions are an opportunity for Russia to strengthen its technological and economic sovereignty, Russian President Vladimir Putin said Friday.

“Recent years have shown that where Westerners imposed restrictions against us, we acquired new competencies and restored old ones at a new technological level," Putin said in opening remarks of his in-person meeting with Belarusian leader Alexander Lukashenko in Moscow.

“This is a time of opportunity to move towards strengthening technological and economic sovereignty,” Putin added.

Putin also said he believes Russia and Belarus will get through these difficulties and will even “acquire more competencies, more opportunities to feel independent, self-sufficient, and ultimately benefit [from them], as it was the case in previous years.”

Lukashenko echoed Putin’s sentiment, saying Belarus has everything it needs for restoring its economy under sanctions.

“We need to rebuild our economy. And we have all we need to restore our own economy, we can do without them. We have everything to continue normal life and work,” the Belarusian President said.

Lukashenko also said he was glad the war in Ukraine started, citing false allegations regarding biological weapons and nuclear power stations being at risk if Russia did not invade. Lukashenko also made an unfounded claim that Ukraine was “preparing to attack not only Donbas, but also placed positions to attack Belarus.”

Some key context: Western sanctions against Russia have been devastating for the country's economy.

"We have isolated Russia financially. The ruble has been in a free fall. The Russian stock market is closed. Russia has been effectively shut out of the international financial system," Yellen said, adding that the Russian central bank's access to its reserves has been largely cut off.

On Wednesday, one US dollar could buy 117 rubles in Moscow after the currency fell 10% and hit a new record low.

Fitch Ratings slashed Russia's credit rating on Tuesday and warned that a default was "imminent."

Britain has added 386 Russian lawmakers to a raft of sanctions it has imposed on Moscow since Russia invaded Ukraine on Feb. 24.

The lawmakers are members of Russia’s Duma, the lower house of the Russian parliament, which recognized the independence of the eastern Ukrainian regions of Luhansk and Donetsk regions and authorized the permanent presence of Russian military there, “acting as a pretext for Russia’s invasion.”

“We’re targeting those complicit in Putin’s illegal invasion of Ukraine and those who support this barbaric war," Truss said. "We will not let up the pressure and will continue to tighten the screw on the Russian economy through sanctions.”

Britain has now sanctioned 800 of Russia’s most “significant and high-value individuals, entities and subsidiaries,” including banks, Putin’s inner circle and oligarchs, she said. 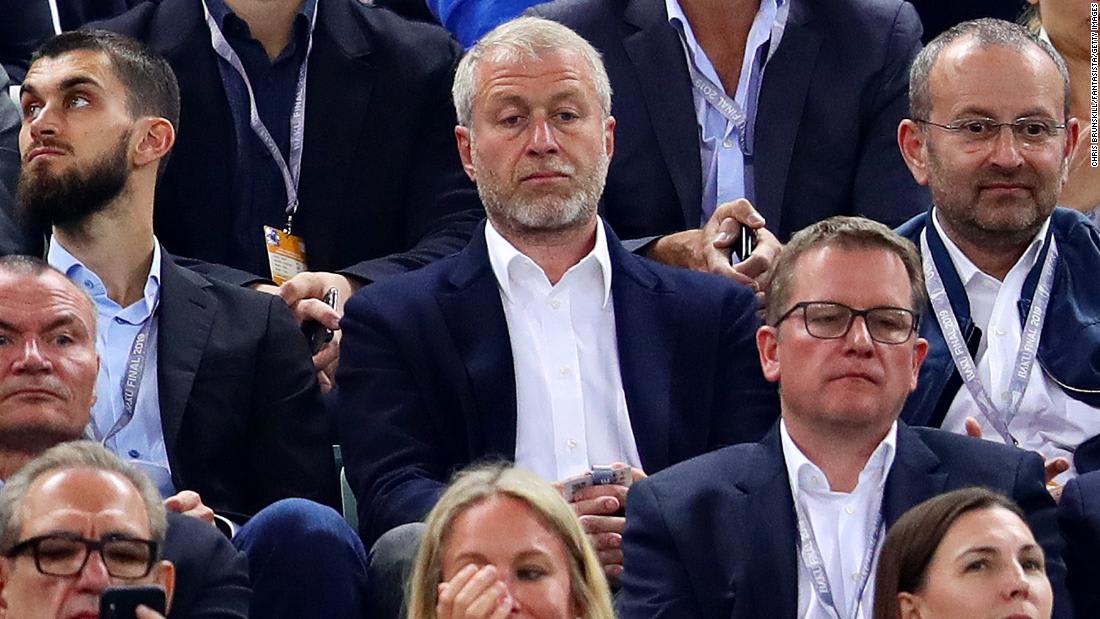 As Russia continues its invasion, the World Health Organization has "strongly recommended" to the Ministry of Health in Ukraine to safely destroy "high-threat pathogens" that might be housed within the country's public health labs in order to prevent "any potential spills," WHO confirmed to CNN in an email Friday.

WHO's recommendation was first reported by Reuters.

Russia's invasion of Ukraine puts public health facilities at risk of damage. Similar to other nations, scientists in Ukraine sometimes conduct research involving pathogens to better understand their biology, how they spread and how they might cause illness in humans.

"WHO also promotes biosecurity at laboratories, e.g. prevention of accidental or deliberate release of pathogens. As part of this work, WHO has strongly recommended to the Ministry of Health in Ukraine and other responsible bodies to destroy high-threat pathogens to prevent any potential spills," Jašarević said.

WHO noted in its email that it encourages "the safe and secure disposal of any pathogens" and would assist as needed and wherever possible.

"WHO routinely assists Member States in improving their public health capacities, including by facilitating improved safety and security of laboratories holding samples of pathogens of public health concern," WHO spokesperson Tarik Jašarević wrote in an email to CNN on Friday.

"WHO’s country office in Ukraine has been working for several years with the Ministry of Health and other partners, including other WHO Member States, to support the enhancing of biosafety and biosecurity of labs, as well as the capacity of lab personnel, in particular to respond to the COVID-19 pandemic," Jašarević said.

A soccer stadium and library in Chernihiv, a city in northern Ukraine, have been badly damaged by an airstrike.

Video footage circulating on Telegram Friday shows debris scattered outside the gates of the city's Olympic sports training center, which was built in 1936, and is where the local soccer team FC Desna Chernihiv and the women's national team play their home games.

Large holes can be seen blown into a nearby library, where hundreds of books are scattered across the ground. A large crater, similar to the ones seen in the aftermath of strikes in Mariupol, lies between the two sites.

Chernihiv is surrounded by Russian forces and parts of the city have sustained significant damage, new satellite images from Maxar Technologies show.

The Ukrainian football association confirmed the strikes in a statement and released pictures showing damage to the stands and pitch.

"For the third time, the Muscovite occupiers fired on the most dangerous military infrastructure facility in the city -- the stadium of our home team. In the photo -- the consequences of the night bombing", the statement said sarcastically.

"But we will be able to rebuild all this, we will only become stronger and better, and you, 'neighbors,' will live with it all your life," it added.

Authorities in the Lithuanian of capital Vilnius have renamed the section of road where the Russian embassy is located to “Ukrainian Heroes Street” in an act of support for the people of Ukraine.

The business card of every employee of the Russian embassy will be decorated with a note honoring Ukraine's fighting,” the mayor of Vilnius, Remigijus Šimašius, said in a statement.

He added that “everyone will have to think about the cruelty of the Russian regime against the peaceful Ukrainian nation when writing this street name.”

This follows a similar move by neighboring Baltic country Latvia, whose capital also changed the address of the Russian embassy in Riga to “Independent Ukraine Street.”

Kaspars Līcītis from Riga's city council told CNN the renaming of the street was to support the “heroic struggle of the Ukrainian people against the hostilities launched by the Russian Federation on the territory of Ukraine.”

Civilians have been left with no heating in sub-zero temperatures amid relentless shelling and missile strikes, the mayor of Kharkiv said Friday.

Ihor Terekhov said that for "all 16 days of war the Russian army has been mercilessly shelling Kharkiv with air strikes. But we are holding up and we will win."

He added that a lot of apartment blocks have been destroyed and that heating systems cannot be restored in more than 400 houses.

Terekhov said: "Severe frosts are coming so I'm calling on you, whose homes are left without heating due to shelling to please go into the metro stations, shelters, schools and kindergartens, that haven't been destroyed yet."

He said that 48 schools had been destroyed so far.

Separately, the State Emergency Service said that a residential home for the disabled near Izium was hit by an airstrike. There were no casualties among the 30 staff and 300 patients, most of whom are elderly, it said.