The statement said the vessel — called "SY A" — is worth about 530 million euros ($578 million) and was in storage at the northeastern port of Trieste.

It's one of the largest superyachts in the world, according to its manufacturer, Nobiskrug.

The sanctions: Melnichenko was sanctioned by the European Union on March 9 as part of expanded punitive measures against Russian oligarchs. According to the EU, he owns the major fertilizer producer EuroChem Group and the coal company SUEK.

The EU council decision, which authorized sanctions against Melnichenko, noted he and 36 other business leaders met with Russian President Vladimir Putin after the invasion of Ukraine began to discuss the potential economic impact of EU and US sanctions.

The EU council decision reads: "The fact that he was invited to attend this meeting shows that he is a member of the closest circle of Vladimir Putin and that he is supporting or implementing actions or policies which undermine or threaten the territorial integrity, sovereignty and independence of Ukraine, as well as stability and security in Ukraine.
"It also shows that he is one of the leading businesspersons involved in economic sectors providing a substantial source of revenue to the government of Russia, which is responsible for annexation of Crimea and ​destabilization of Ukraine."

The detention of the mayor of the southeastern Ukrainian city of Melitopol is a "crime against democracy," Ukraine's President Volodymyr Zelensky said Friday in a video posted on Facebook.

Earlier Friday, Melitopol mayor Ivan Fedorov was seen on video being led away from a government building in the city by armed men. A short time later, the Russian-backed Luhansk regional prosecutor claimed Fedorov had committed terrorism offenses and was under investigation.

Fedorov's detention was "a sign of the weakness of the invaders," Zelensky said.

"They did not find any support on our land, although they counted on it. Because for years they've been lying to themselves that people in Ukraine were supposedly waiting for Russia to come.
"This is Ukraine here. It is Europe here. It is a democratic world here."

"This is a crime against democracy," he said.

The lines were entirely cut earlier this week, with the last one “destroyed as a result of the occupant’s shelling” on Wednesday, Ukraine's energy minister said.

The International Atomic Energy Agency (IAEA) said diesel generators have been providing backup power to the site since Wednesday, and additional fuel supplies have been delivered to the Russian-controlled facility.

Some context: Russian troops overran the Chernobyl plant — the site of the world's worst nuclear disaster — on the first day of the invasion on Feb. 24, with staff still inside.

Some 211 technical personnel and guards at the site have in effect been living at the facility and in "increasingly difficult conditions" with potentially dwindling food supplies, the IAEA said.

The Ukrainian regulator told the IAEA it lost communication with the plant on Thursday, though it has continued to receive updates about the situation from senior off-site management.

Other nuclear facilities: The agency also gave updates about two other nuclear facilities in Ukraine. The power situation at the Zaporizhzhia nuclear plant is “unchanged,” with two of four power lines damaged, the IAEA said, adding that one power line could provide the plant’s off-site power needs and diesel generators for back-up power are ready and available.

In Kharkiv, a nuclear facility for research and development and radioisotope production for medical and industrial applications suffered “additional damage” after facing shelling earlier this week.

However, the IAEA said the nuclear material at that site is subcritical and the inventory of radioactive material is low, and the agency assessed the damage would not lead to radiological consequences.

Here's a look back at the 1986 Chernobyl disaster in pictures: 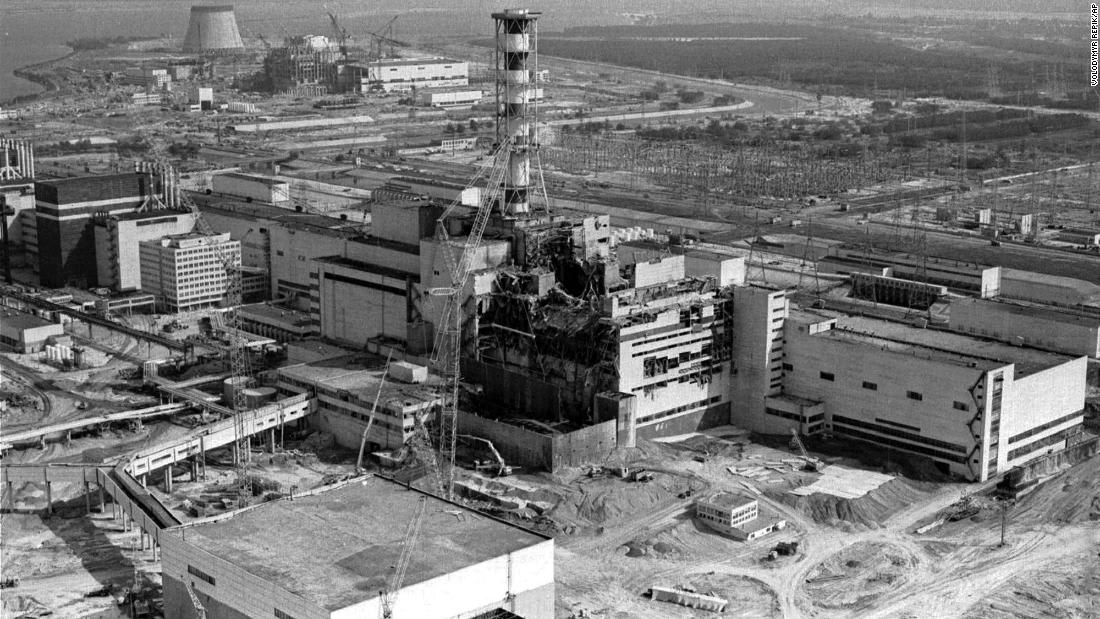 With Russia's war in Ukraine now in its third week, US and European officials have little optimism that diplomatic channels can deliver a way out of the conflict at this point.

Impact of sanctions: The US and its allies have enacted crippling sanctions on Russia in response to its invasion of Ukraine, and US President Joe Biden has kept in touch with European leaders as well as Ukrainian President Volodymyr Zelensky. But US officials have privately acknowledged they don't believe any of these sanctions are going to change Putin's thinking, and many don't believe Russia's losses in Ukraine will either.

The Biden administration is resisting putting its weight behind any single player involved in early efforts to broker a solution to end the Ukraine crisis. US officials say they have yet to see any tangible progress in any channel and continue to view Ukraine and Russia as the only essential players in driving a solution. 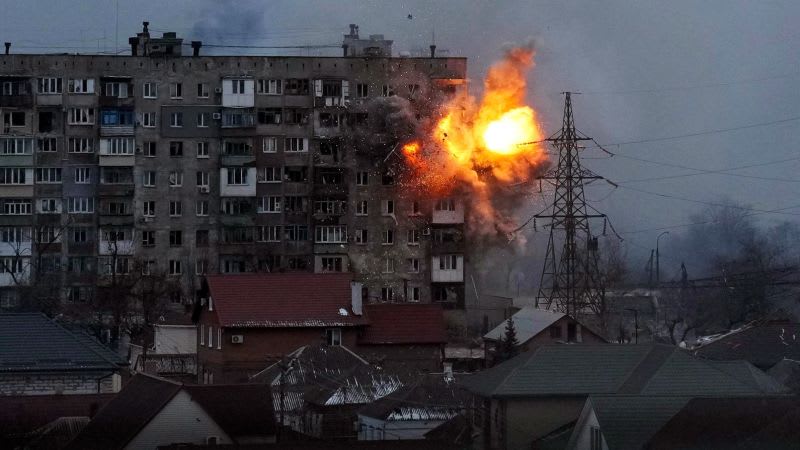 It's not clear whether the explosions were Russian or Ukrainian strikes, she said.

Fighting is continuing on the outskirts of the Ukrainian capital, with the city's administration saying areas to the north remain the most dangerous, including the suburbs of Bucha, Irpin and Hostomel, as well as the district of Vyshorod further north of Kyiv. Fighting has also escalated in Brovary, across the Dnieper River, east of the city.

As Russian forces press in from several directions, "the worry becomes ... that the intention is to fully surround the city, to starve the city, to bombard the city and then ultimately to try to overthrow (Ukrainian President Volodymyr) Zelensky's government," Ward said.

Kyiv Mayor Vitali Klitschko told CNN the city currently only has resources — including food and medical supplies — for one to two weeks.

CNN's Ward added that "Ukrainian forces are everywhere" in Kyiv. "They have dug up defensive positions along all the main thoroughfares leading into the city, they've put tank traps around. This is a heavily fortified city now. And even if Russian forces are enable to encircle it, it will still be an almighty battle for them to get to the heart of it."

Russian air and missile forces have conducted strikes against the western Ukrainian cities of Lutsk and Ivano-Frankivsk in the past 24 hours, the UK Ministry of Defence said in its latest intelligence update on Friday.

"The staunch resistance of the Ukrainian air defence forces is compelling Russia to rely on 'stand-off' munitions to conduct attacks against targets deep inside Ukraine," the ministry said.

The ministry added that Russian tactical aircraft supporting ground forces are relying on "unguided 'dumb' munitions," which are "relatively inaccurate and indiscriminate and their use significantly increases the likelihood of civilian casualties."

Prior to his address on Friday, US President Joe Biden spent 49 minutes on the phone with Ukrainian President Volodymyr Zelensky, detailing the new measures he was going to announce regarding US trade with Russia, two officials familiar with the call tell CNN.

While most of Biden and Zelensky's calls since the invasion have hovered in the 30- to 40-minute range, this was one was a bit longer as Biden highlighted how the US was moving to suspend normal trade relations with Russia in another effort to punish the Kremlin.

Zelensky tweeted that he gave Biden an "assessment of the situation on the battlefield, informed about the crimes of Russia against the civilian population" and they agreed on "further steps to support the defense of Ukraine and increase sanctions against Russia."

An independent US government agency is calling on the Biden administration to push for Russia to be permanently expelled from Interpol — a step further than the suspension the administration has already sought — citing the invasion of Ukraine and previous abuses by Russia, according to a letter obtained by CNN.

Interpol, the International Criminal Police Organization, is a global agency which facilitates police across its 195 member countries to collaborate on criminal investigations. Interpol issues what are known as Red Notices to request the location and arrest of an individual pending their extradition.

Friday’s letter from the Commission on Security and Cooperation in Europe commended the steps the US has taken so far, but added that the administration should call for the permanent suspension of Russia.

“We urge you to use the U.S. position in Interpol (and in particular Interpol's Executive Committee and its Advisory Group on Financial Matters) to make it clear that any failure to act against Russia's abuse of lnterpol will have grave consequences for the U.S. contribution to Interpol's budget and Interpol's legal immunities in the United States,” the letter, directed to Garland and Secretary of State Antony Blinken, reads.

The commission — also known as the US Helsinki Commission — was created by Congress in 1976 with a focus on human rights, military security, and economic cooperation. It is led by Sen. Ben Cardin and Rep. Steve Cohen.

If Russia is suspended from Interpol, it would bar the country from continuing to participate and therefore put in requests for Red Notices, but it would not remove Red Notices that are already in the system, said Ted Bromund, a senior research fellow at the Heritage Foundation and an expert in Interpol.