Russia has committed “nearly 100%” of the combat power that had been staged on the border of Ukraine and in Belarus, according to a senior US defense official.

Russia has also launched more than 625 missiles against Ukraine, according the official.

The official said that while the airspace over Ukraine is still contested, the US assesses that Ukrainian President Volodymyr Zelensky has “the vast majority of his fixed-wing aircraft” available, as well as surface-to-air weapons to defend Ukrainian airspace.

Coordinated energy sanctions against Moscow, including a ban on Russian oil, are still "very much on the table," British Prime Minister Boris Johnson said Monday.

Speaking during a news conference alongside his Dutch and Canadian counterparts in London, Johnson said it was the "right thing" to move away from Russian hydrocarbons.

On Sunday, US Secretary of State Antony Blinken told CNN's Jake Tapper that the United States is “now talking to our European allies and partners to look at a coordinated way” to ban Russian oil.

"In the sense that we're all together now moving very, very fast and seeing that something that perhaps three or four weeks ago we would never have considered is now very much on the table," Johnson continued.

Countries need to consider how to move away from Russian hydrocarbons "as fast as possible," Johnson added.

"We're going to work together on making sure that we all have the substitutes and the supplies that we need," Johnson continued.

Russia will "try again" to discuss evacuation routes with Ukraine during talks on Monday, according to Russia's chief negotiator for the discussions.

Speaking on his way into the third round of talks in Belarus, Vladimir Medinsky said the two sides will discuss "the same issues, political settlements, international humanitarian issues and military settlement" as last week's talks.

"We will try again" to discuss evacuation routes with the Ukrainian side, Medinsky said, lamenting their failure to come about last week.

On Monday, the Russian defense ministry announced in a statement that it will open evacuation corridors from 2 a.m. ET from the Ukrainian cities of Kyiv, Kharkiv, Sumy and Mariupol.

Ukrainian Deputy Foreign Minister Iryna Vereshchuk responded to the statement, demanding that Russia "accept options for our routes, as well as to establish a ceasefire, which we will agree on."

According to state-owned television Russia 24, the talks are now underway. The first two rounds of negotiations did not yield tangible results.

Chairman of the Joint Chiefs of Staff Mark Milley met with the Romanian Chief of Defense Staff General Daniel Petrescu during a visit to Mihail Kogalniceanu Air Base in Romania on Monday, according to a readout from Joint Staff spokesperson Col. Dave Butler.

“The military leaders discussed Russia’s ongoing invasion of Ukraine and NATO’s response, including the deployed and rotational U.S. military forces in Romania working with NATO Allies and partners to deter Russian aggression and assure NATO,” the readout said.

Milley also met with defense leaders from Latvia and Estonia on March 6, according to separate readouts. In Latvia, Milley met with Latvia’s Minister of Defense Artis Pabriks and Commander of the Latvian National Armed Forces Lieutenant General Leonids Kalnins during a visit to the Joint Headquarters of the Latvian National Armed Forces, the readout said.

The military leaders discussed the “ongoing invasion of Ukraine” in their meetings, including “the deployed US military forces in Latvia working with NATO allies and partners to deter Russian aggression,” the readout said.

In Estonia, Milley met with Estonia’s Chief of Defence Lieutenant General Martin Herem during a visit to Ämari Air Base, a separate readout said. The two leaders also discussed the ongoing invasion of Ukraine and “NATO’s response,” the readout said.

Energy was deliberately left out of previous rounds of sanctions, Scholz said in a news release Monday, adding Russia energy is of “essential importance” to the general, daily lives of its citizens.

In a Facebook video posted Monday, he spoke of the substantial damage existing sanctions on Russia have had on its economy.

"Those who ask for the expansion of the sanctions, want the Hungarian people to pay the price of the war."

Remember: The EU relies on Russia for 40% of its gas needs and about 27% of oil imports.

When asked about the potential for sanctions on Russia energy in a news conference Monday, UK Prime Minister Boris Johnson said options that were unthinkable three weeks ago, are now “very much on the table."

“We have to consider how we can all move away as fast as possible from dependence, reliance on Russian hydrocarbons, Russian oil and gas. Everybody is doing that. Everybody is on the same journey. Some countries will find it faster and easier than others," he added.

On Sunday, US Secretary State Antony Blinken told CNN that the US is working with its allies in Europe to look into the possibility of banning Russian oil imports in an effort to further punish the country.

The fallout of an import ban on Russian oil would have limited impact in the US given Russia represents less than 2% of its overall oil imports. 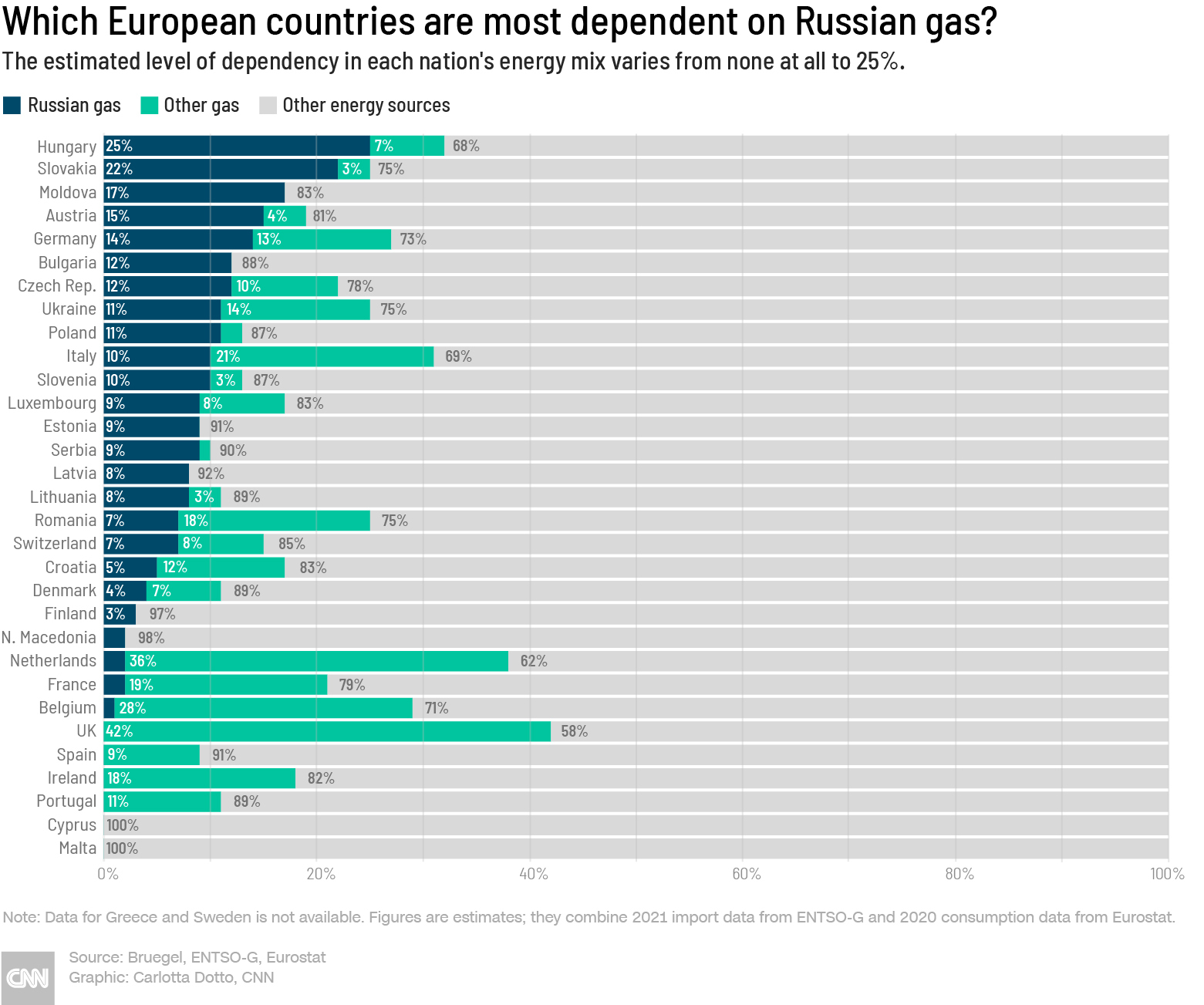 Intense fighting in Mykolaiv is continuing on Monday, as video shows new explosions from military strikes and large plumes of smoke around the Ukrainian city located about 250 miles south of Kyiv.

CNN has geolocated and verified the authenticity of the videos.

In one of the videos, taken in the Korabelnyi district — the southern-most neighborhood in Mykolaiv — explosions from military strikes are seen over a residential area. In recent days, fire fights between the Ukrainian and Russian militaries have centered around the military base on the southeastern side of the city.

In a video posted to Telegram, the regional administrator for the Mykolaiv area, Vitali Kim, claimed the Russians were retreating after they lost two tanks in a "tank battle" at the airport. Kim also said some of the Russian forces had been evacuated from the area by helicopter. CNN has been unable to verify Kim's claims, and he did not offer any evidence to support them.

Another video shows a dark plume of smoke rising from the northern neighborhood of Solyani.

The individuals include former and current senior Russian government officials, oligarchs and supporters of the Russian leadership, Trudeau said, speaking alongside his British and Dutch counterparts in London.

"The names of these individuals come from a list compiled by jailed opposition leader Alexey Navalny. The sanctions put increased pressure on Russia’s leadership including Putin’s inner circle,” Trudeau said.

The Canadian leader said he hoped the sanctions and "massive tariffs" imposed on Russian and Belarusian imports would punish "Putin where it hurts most in particular financial systems and sanctioning their central bank so far."

The US is considering supplying critical air defense systems to NATO allies in eastern Europe as anxiety mounts that the Russians could consider launching missiles or aircraft against the alliance’s eastern flank, according to a US official familiar with current administration thinking.

“The US is considering a range of capabilities,” the official said.

There is no specific plan yet, but the idea centers around the concern that Russian missiles or aircraft might deliberately attack targets inside NATO territory at some point if Russian President Vladimir Putin decides those nations are a risk to his invasion because of their support for Ukraine. And because of close proximity of the airspace, there is also concern that air defense be available if there is inadvertent straying into NATO airspace. The establishment of a US Russia so-called deconfliction line was in part to address those worries. But there is a sense an umbrella of air defense is needed.

Because of the defensive nature of these systems, the US will emphasize that the Russians should have no concerns. The most likely systems that could be deployed by the US are likely to be the Patriot and the THAAD (Terminal High Altitude Area Defense) system which have successfully been used in the Middle East to help shoot down incoming ballistic missiles. The US estimates that Russia has already fired some 600 missiles since the invasion began.

This is the moment for "Ukraine's friends to create a coalition of humanitarian, economic, and defensive military support to ensure that Putin fails in this catastrophic invasion," he said Monday, while speaking during a joint news conference with his Dutch and Canadian counterparts in London.

The United Kingdom, Canada and the Netherlands "stand shoulder to shoulder" against Russia's invasion of Ukraine, Johnson added.

"Our new international Ukraine support group will coordinate the efforts of the international community to provide long term and unwavering assistance now and in the future, and we will be encouraging more countries to join us," Johnson told the news conference.

In 12 days of Russian invasion into Ukraine, Johnson said it's clear that Russian President Vladimir Putin made a "miscalculation" in underestimating Ukraine.