"Most of Putin's war crimes in Ukraine have been committed from the air," the ministry said in a statement.

"Russia's missiles and planes are deliberately destroying historic centers of big cities. Putin wants to destroy Europe's heritage and culture, wipe it from the face of the earth."

"A mad dictator threatens to destroy St. Sophia Cathedral in Kyiv, a UNESCO church built in the 11th century," the ministry warned.

"Hundreds of innocent victims, the total destruction of churches, cathedrals and museums - is the price of the still opened sky over Ukraine."

In Ivankov, near Kyiv, the museum of "world-famous artist Maria Pryimachenko, whose works were admired by Pablo Picasso" was also shelled. The Kyiv State Academy of Decorative Arts and Design has also been damaged by the "occupiers."

"The world must stop this," the ministry added.

"It's very difficult to believe that it wasn't done deliberately. But in any event, it is unlawful to attack a site like this and not to do your due diligence on it and to keep bombarding it," Raab told BBC Breakfast.

Ukrainian authorities said a fire that broke out at a nuclear power plant early Friday amid heavy shelling by Russian forces has now been extinguished. The plant is the largest of its kind in Ukraine and contains six of the country's 15 nuclear energy reactors, according to the International Atomic Energy Agency (IAEA).

"We are seeking an urgent session of the UN Security Council and will use all the legal and political means at our disposal to address the issue," she said in a post published from her verified Twitter account.

The news comes after UK Prime Minister Boris Johnson condemned the “abhorrent attacks” on Ukraine in a phone call with Ukrainian President Volodymyr Zelensky on Wednesday.

Zelensky thanked Johnson for the UK’s support and defensive aid, saying “it had been vital in holding back Russian forces," according to a statement from Johnson's office.

EU foreign policy chief Josep Borrell has expressed his support for an emergency meeting of the UN Security Council following an attack on Ukraine’s Zaporizhzhia nuclear power plant by Russian forces, warning that such attacks could have “catastrophic” consequences.

“Russian attacks in the direct vicinity of Ukraine’s nuclear power plants can have catastrophic consequences. They must stop immediately,” Borrell tweeted Friday.

“Shelling and resulting fire at (Zaporizhzhia) power plant can endanger the whole of Europe,” he added.

According to a statement shared by Energoatom -- Ukraine’s nuclear power operator -- via Telegram on Friday, the plant's staff continues to work on power units, “ensuring the stable operation of nuclear facilities.”

Russia's second-largest oil firm has called for an end to the conflict in Ukraine.

“The Board of Directors of LUKOIL expresses herewith its deepest concerns about the tragic events in Ukraine," the firm said in a statement.
"Calling for the soonest termination of the armed conflict, we express our sincere empathy for all victims, who are affected by this tragedy. We strongly support a lasting ceasefire and a settlement of problems through serious negotiations and diplomacy."

Lukoil is majority owned by Vagit Alekperov, and his deputy, Leonid Fedun, according to Reuters.

Ukraine President Volodymyr Zelensky said that it will become clear Friday if the warring parties can successfully create humanitarian corridors to help civilians escape some of the worst fighting in the country.

Envoys from Russia and Ukraine agreed to put in place the corridors during talks in Belarus on Thursday.

"Today we will see if the agreement works," Zelensky said.

Russian casualties: Zelensky claimed that Ukrainian forces were inflicting heavy losses on Russian troops. He said that almost 9,200 had been killed and acknowledged that the Kremlin continues to target Kyiv, the capital.

"The capital remains a key target for the occupiers. But they will not break us," Zelensky said.

Russian President Vladimir Putin has acknowledged casualties on his side.

CNN is unable to verify casualty numbers claimed by either side in the conflict.

The Russian military issued a lengthy statement Friday on fighting around the nuclear power plant near the Ukrainian city of Zaporizhzhia.

In a video briefing, Russian Ministry of Defense spokesperson Maj. Gen. Igor Konashenkov said Russian forces took the city of Enerhodar, the Zaporizhzhia nuclear power plant and the territory adjacent to it on Monday.

“The military personnel of the Ukrainian National Guard who were guarding the power plant left the facility and disappeared in an unknown direction before the arrival of the Russian units,” he said. “The station facilities and the adjacent territory were taken under guard by Russian military personnel.”

Konashenkov claimed that the plant's technical staff continued regular work on the facilities, but that Ukrainian forces attempted a "monstrous provocation" in the early morning hours Friday.

"On March 4, at about 2:00 a.m., while patrolling a protected area adjacent to the Zaporizhzhia nuclear power plant, a mobile patrol of the Russian Guard was attacked by a Ukrainian sabotage group," Konashenkov said. "To provoke return fire on the building, heavy fire from small arms was opened at the servicemen of the Russian Guard from the windows of several floors of the training complex located outside the power plant."

CNN could not immediately verify any details of the firefight on the territory of the plant.

"The fire brigades arrived at the building and extinguished the fire in the premises," Konashenkov said. "At the time of the provocation, none of the full-time employees of the power plant was in the training building. Currently, the staff of Zaporizhzhya NPP (nuclear power plant) continues to work as usual, maintains the NPP facilities and monitors the radioactive situation. The radioactive background in the area of ​​the power plant is normal."

Ukrainian President Volodymyr Zelensky condemned Russia's attack on the nuclear power plant in a Facebook message earlier on Friday and warned of the dangers associated with attacks on nuclear facilities. There has been no indication that any of the reactors at Zaporizhzhia have been affected.

Konashenkov claimed that Zelensky's statements and communication about the incident "leave no doubt. The purpose of the provocation of the Kyiv regime at a nuclear facility is an attempt to accuse Russia of creating a source of radioactive contamination."

The Russian government has routinely and without evidence claimed the Ukrainian government is staging "provocations" to provoke a military response by Western governments.

Russian state broadcaster Perviy Kanal 1 has shown a report filed from Hostomel airport in the outskirts of Kyiv, seemingly one of the first from the frontlines of Russia’s invasion of Ukraine.

Russian state media have avoided broadcasting footage from the frontlines, specifically of shelled civilian infrastructure. Their reports on the war in Ukraine have focused on supplies and aid being distributed by the Russian military in certain areas or on destruction in the Donbas region, where pro-Russian separatists have been at war with the Ukrainian military since 2014.

In the footage broadcast on Friday, a Russian reporter is seen showing viewers around the airfield, full of debris, with unexploded ordnances and damaged hangers. Explosions can be heard in the background and the reporter claims the damage was caused by the Ukrainian military shelling of the airport.

She also points at the hanger where the remains of Antonov An-225 Myria, the largest airplane in the world, can be seen. The reporter claims the Myria was destroyed by Ukrainian shelling of the airport.

The Ukrainian military and government had previously said Russian attacks on the airport had been responsible for the destruction of the An-225.

The report on the Perviy Kanal 1 broadcast claims Hostomel airport is under Russian control. The Ukrainian military has denied Russia has control of the airport. CNN understands the area is contested but is unable to independently verify who holds control over Hostomel.

NATO chief Jens Stoltenberg denounced on Friday the "brutal" Russian invasion of Ukraine, and condemned attacks on civilians and on the Zaporizhzhia nuclear power plant in Enerhodar, southeastern Ukraine.

"We condemn the attacks on civilians. And over the night, we have also seen reports about the attack against the nuclear power plant," Stoltenberg said in a joint press conference with US Secretary of State Antony Blinken, ahead of a meeting with Western foreign ministers in Brussels.

He said that while NATO allies have "implemented unprecedented sanctions" on Russia and provided "support" to Ukraine, "NATO is not part of the conflict."

"At the same time, we need to make sure that there is no misunderstanding about our commitment to defend and protect all Allies."

He said that NATO forces have increased their "defensive presence" in the eastern part of the Alliance.

Stoltenberg also called on the US, Europe and Canada for support.

"I welcome the strong commitment from the United States with more troops," he said.

"I met many of them. And it is always great to meet US troops in Europe and to see their commitment, and their professionalism, being part of the transatlantic bond.

"I also welcome that European Allies and Canada are stepping up with more presence in the eastern part of the Alliance, on land, at sea and in the air.

"If anything, I think the crisis we are faced with now demonstrates the importance of North America standing together in strategic solidarity in NATO," he added.

Also reacting to the attack, UK Deputy Prime Minister Dominic Raab told BBC Breakfast, “It’s very difficult to believe that it wasn’t done deliberately. But in any event, it is unlawful to attack a site like this and not to do your due diligence on it and to keep bombarding it.”

The fire was extinguished in the early hours of Friday morning.

Russia is effectively in control of the Chernobyl and Zaporizhzhia nuclear power plants, according to Rafael Mariano Grossi, the head of the International Atomic Energy Agency said Friday.

Chernobyl was the site of the world's worst nuclear disaster in 1986. Russian forces seized control of it last week.

The Zaporizhzhia plant just fell under Moscow's control, and during the fighting, a Russian projectile hit a building within the site, causing a localized fire.

None of the reactors were nearby, and they were unaffected. The fire has been extinguished and the radiation monitoring systems are fully functional.

Ukrainian staff are still at the helm of operations, Grossi said.

Grossi warned that the situation at Zaporizhzhia is “ very fragile."

He said it was "unprecedented" to run a nuclear plant while military operations raged nearby. 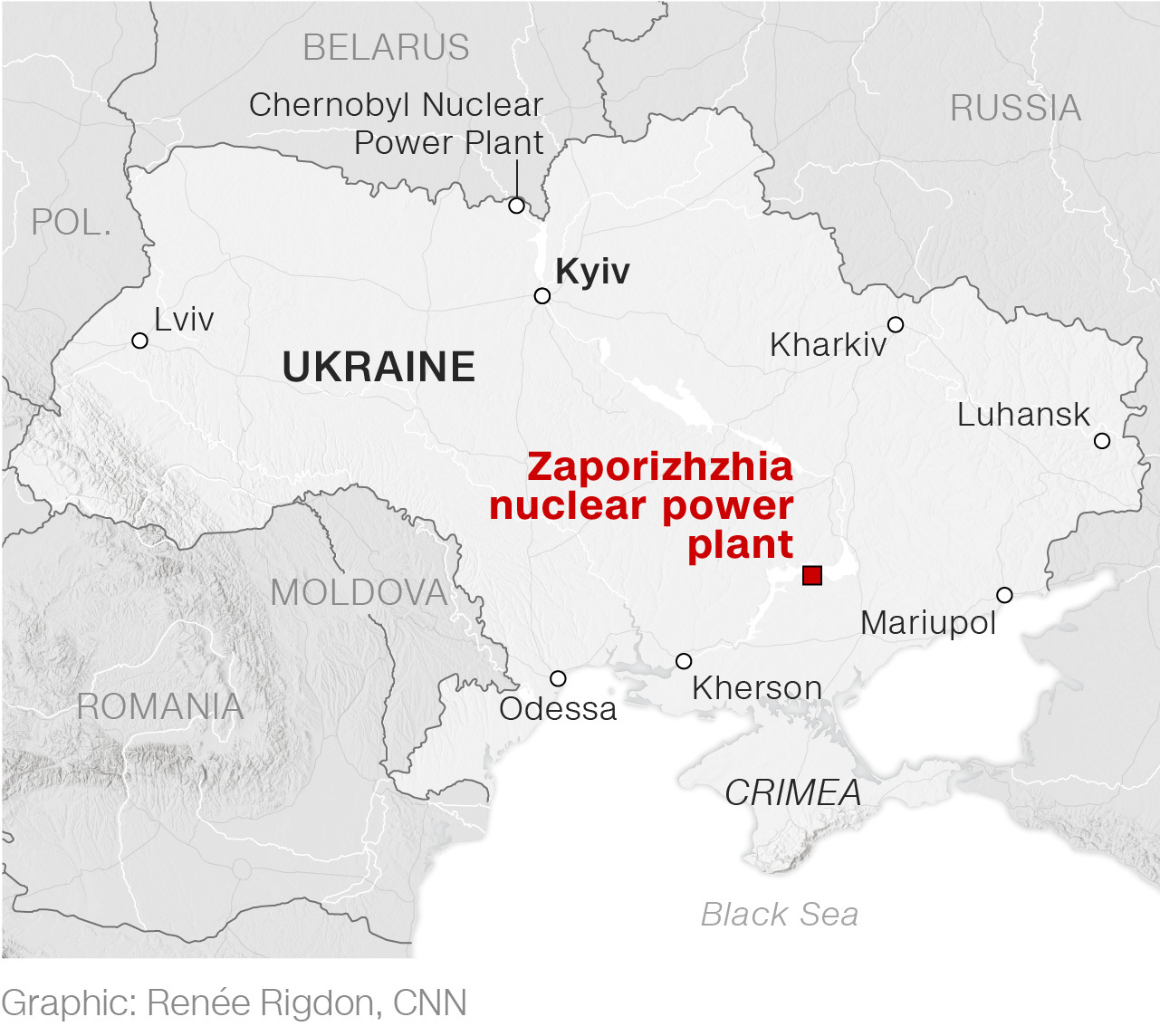