Canadian Prime Minister Justin Trudeau spoke with Ukrainian President Volodymyr Zelensky on Wednesday, during which he expressed solidarity and offered further support for the Ukrainian people, according to a statement from Trudeau's office.

In a tweet, Zelensky thanked Trudeau for his leadership in imposing sanctions on Russia, adding he “stressed the need to expand restrictive measures.”

Trudeau said he commended Zelensky’s bravery and frontline leadership, calling it inspirational for Canadians and people around the world.

Russia would be held "accountable for its unjustifiable and illegal invasion of Ukraine’s sovereign territory," Trudeau said.

According to the statement, the two leaders discussed ways in which Canada could continue to support Ukraine in the immediate future.

“In just seven days we have witnessed the exodus of one million refugees from Ukraine to neighbouring countries,” Grandi said.

“For many millions more, inside Ukraine, it’s time for guns to fall silent, so that life-saving humanitarian assistance can be provided,” he added.

Want to help? You can learn how to support humanitarian efforts in Ukraine here.

South Korea is relocating its embassy in Ukraine from Kyiv to a "safe area," the country's Foreign Ministry said Wednesday as Russian troops step up their assault on the Ukrainian capital.

The ministry did not disclose the embassy’s destination, citing safety reasons. The embassy will resume operations once it settles down in the new location, the ministry said.

South Korea’s Foreign Minister Chung Eui-yong spoke with his Ukrainian counterpart Dmytro Kuleba by phone on Wednesday, according to the ministry.

The ministers agreed to ensure the safety of nationals of both countries in Ukraine and South Korea. Seoul has granted stay extensions for Ukrainians in the East Asian country.

Ukrainian forces captured several Russian troops on Wednesday in the southern city of Mykolaiv, where fierce fighting broke out in recent days, according to the region's governor and a member of Ukraine's Parliament pictured with the captured soldiers.

Roman Kostenko, a lawmaker and secretary of the Parliament’s Committee on National Security, Defense and Intelligence, told CNN that a reconnaissance unit of the Russian GRU’s 10th brigade had been intercepted on the outskirts of Mykolaiv.

“We encircled them and they gave themselves up. They are with the SBU," he said, referring to the Ukrainian security services. He said one of the five Russian soldiers had died, one was taken straight to hospital and three were alive.

CNN cannot independently verify the circumstances of the capture or the status of the prisoners. CNN has observed clashes in the past days as Russian troops tried to enter the city.

“They are attacking Mykolaiv occasionally, but the fight is on the outskirts and they try to go around us to close the loop on us," Kostenko said.

Mykolaiv is close to the Black Sea, located about an hour away from Kherson, a strategically important city that has seen heavy fighting between Russian and Ukrainian troops this week.

Russian soldier calls home: One of the captured Russian soldiers was filmed while being allowed to call his mother on the telephone, according to a video posted on Telegram by the region's governor, Vitaliy Kim.

"Don’t worry, I am OK," the soldier told his mother.

A Ukrainian soldier took over the call and said, "You know what your son does? He fights and kills our civilians."

The Russian soldier added, "Mom, I am a prisoner. And, basically, Mom, go to the military registration and enlistment office and start getting together the Council of Soldiers' Mothers so that they would get our people out of here, those who are fighting in Ukraine."

The Ukrainian soldier added, "We will not touch him because I am half Russian and Ukrainian."

Earlier this week, the Canadian Embassy in Beijing put up at least two banners outside its building in the colors of the Ukrainian flag, bearing the words "We support Ukraine."

The embassy tweeted a photo of the banners on Tuesday, with the caption, "Stand with Ukraine."

By Wednesday night, one of the banners had been vandalized by graffiti using expletive language against NATO, as seen by a CNN producer in Beijing.

It's unknown if any arrests have been made in connection with the incident.

Some context: China has found itself in a complex position regarding Ukraine, juggling its close strategic partnership with Moscow with growing international outrage over President Vladimir Putin's invasion and Beijing's own seemingly contradictory policy of supporting state sovereignty.

Beijing has avoided condemning Russia's attack on Ukraine, with Chinese officials instead blaming the invasion on "NATO expansion eastward all the way to Russia's doorstep."

Read more about the China-Russia relationship: 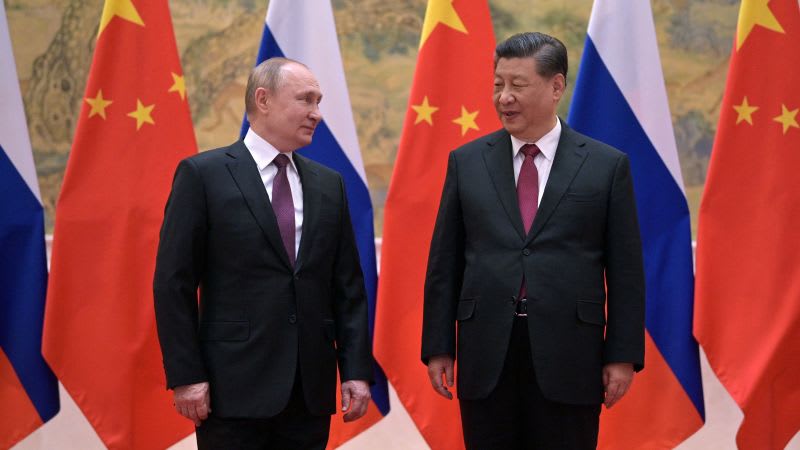 As war breaks out in Europe, China blames the US | CNN

The measures aim to put more pressure on Russia’s leadership to stop the war, according to a news release from Canada’s Office of the Minister of Foreign Affairs.

“Canada’s support for Ukraine and its people is unwavering,” Minister of Foreign Affairs Mélanie Joly said in the release. “We will continue to meet every act of aggression by Russia’s leadership with measures designed to weaken its ability to wage war. As the horrific events in Ukraine continue to unfold before our eyes, it is clear more must be done. Those who aid and abet Russian aggression will be held accountable. Canada stands with Ukraine.”

As the conflict in Ukraine escalates, concerns are growing that the financial impact will be felt in the United States — especially in higher gas prices.

According to Daleep Singh, President Joe Biden's deputy national security adviser for international economics, the White House does not "have a strategic interest in reducing global energy supplies," a maneuver which would "only increase prices at the pump for Americans, and pad [Russian President Vladimir] Putin's profits."

Instead, Singh told CNN's Erin Burnett, the plan is in "degrading and downgrading Russia's status as a leading energy supplier."

Asked how the current sanctions — which limit the availability of oil and drive prices up — hurts Russia and not the US, Singh said the administration aimed to cut US consumption of Russian oil while maintaining global energy supplies.

"That's really our goal," he said, adding, "that's consistent with putting the pain to Putin and making sure Americans don't pay for it at the pump."

"The President was clear last night: when dictators don't pay a price for their aggression, they cause more chaos, and the cost and the threats to the American people and people all over the world continue to go up," he said.

"This is a moment for American resolve and we must put debilitating pain on Putin for his tragic choices."

Singh added the US is trying to paralyze the Russian economy as Putin continues to act aggressively in Ukraine.

"We sanctioned 22 more Russian defense companies that are powering the Russian war machine. We tightened the vice grip on Russia's economy by preventing Russian exporters ... from defending the ruble," he said, referring to Russia's currency.
Putin's "war chest of foreign reserves is now essentially worthless," he added. "The ruble is worth less than a penny ... this pain will continue to intensify for Putin's strategic choices, which will be a failure."

At least three schools in Ukraine's second-largest city, Kharkiv, were hit by Russian military strikes on Tuesday, according to videos and photos posted to social media.

CNN has geolocated, and confirmed the authenticity of the videos and photos.

One of the schools is in the northern neighborhood of Saltivka; the other two just over a kilometer (about 0.6 miles) apart in the industrial district in the southeast of the city.

Classes have been suspended since the Russian invasion began. It's unclear at this time whether there were any injuries or casualties as a result of the strikes.

Cathedral and shops hit: Other videos and photos show damage to a cathedral and a row of shops in the city.

A number of framed art and other objects inside Kharkiv's Assumption Cathedral were broken by blasts from a strike on the nearby City Council building, photos show. The floor is covered with broken glass from the windows.

In Saltivka, video obtained by a local news outlet shows a row of shops in front of an apartment building destroyed by military strikes. A nearby building is also seen on fire.

In recent days, a number of apartment complexes, government buildings and residential areas have been damaged during the attacks.

A Western intelligence report indicated that Chinese officials, in early February, requested that senior Russian officials wait until after the Beijing Olympics had finished before beginning an invasion into Ukraine, US officials said Wednesday.

US officials broadly view the report as credible, but its particulars are open to interpretation, according to one source familiar with the intelligence. Although the request was made around the time that President Vladimir Putin visited Beijing for the opening ceremony of the Olympics — where he met with Chinese President Xi Jinping — it is not clear from the report whether Putin addressed the matter with Xi directly, the source said.

Western intelligence officials warily watching Putin’s buildup on the Ukrainian border at the time had anticipated that Putin might delay any military action until after the Olympics to avoid angering China.

After Putin and Xi’s meeting, Moscow and Beijing issued a joint statement declaring that their partnership had “no limits” and condemning NATO expansion — a key pillar of Putin’s justification for attacking Ukraine.

That statement has elevated Western concerns about a burgeoning alliance between China and Russia.

Liu Pengyu, a spokesman for the Chinese embassy in Washington, said, "The claims mentioned in the relevant reports are speculations without any basis, and are intended to blame-shift and smear China."

CNN has reached out to the Russian embassy in Washington for comment.

The New York Times first reported the existence of the report.