It’s easy to trace where those hundreds of tanks, towed artillery, armored and logistical vehicles came from. Just follow the roads.

In Ukraine, northwest of Kyiv, all roads lead to Belarus. The roadway and bridge at Chernobyl — the town, not the failed nuclear reactor — ends in Belarus. Every other major road northwest of the Ukrainian capital, Kyiv, ends in Belarus, which borders northern Ukraine.

Russian buildup of troops: For weeks prior to its invasion of Ukraine, Russia amassed its forces in Belarus.

Hundreds of Russian military vehicles, aircraft and helicopters were moved to the former Soviet state in order to participate in what the two allies described as joint exercises. But after the maneuvers ended, the Russian forces didn’t go home.

In fact, additional satellite imagery from Maxar showed that Russia continued to increase the amount of military vehicles, air power and weaponry in Belarus. From the city of Brest in the country's east, to Gomel in the west, Russian forces kept popping up at air bases, in towns and in even in fields on satellite images and social media.

Pontoon bridge: Satellite images even showed that Russia constructed a pontoon bridge across the Pripyat River in the greater Chernobyl exclusion zone, which spans Ukraine and Belarus. The day the invasion into Ukraine began, additional satellite images from Capella Space showed Russia began moving dozens of military vehicles across that bridge.

Military power: The sheer length of the convoy is massive and speaks to the amount of the military power the Russians have amassed to try and take Kyiv.

It also speaks to Belarus’ activity in supporting and carrying the invasion — and responsibility for it.

That military power could not have been amassed by the Russians without the permission, and assistance, of Belarus.

Russian forces bombarded a residential area in Ukraine's second-largest city with rockets on Monday, killing at least nine people, and several large detonations were heard in the center of the capital, Kyiv, as talks between delegates on both sides in Belarus came to a close.

The attack and explosions were launched as Russia becomes increasingly isolated from the rest of the world, particularly Western nations, which have been imposing a rash of sanctions on the country since it launched its invasion of Ukraine last week.

The bombardment in the city of Kharkiv on Monday killed nine civilians, including three children, and wounded 37 others, Mayor Ihor Terekhov said. CNN is reaching out to Russian authorities for comment on the attack.

According to social media videos geolocated by CNN, multiple rockets were seen exploding closely together in a residential part of the Saltivka neighborhood, near a supermarket in the northeast of the city, which the Russian military has frequently targeted.

Ukraine's Prosecutor General Iryna Venediktova described the situation in Kharkiv as "hellish" and shared a video on Facebook of a missile that hit a kitchen window and tore off the leg of a woman, who she said later died in hospital.

Both sides discussed a potential "ceasefire and the end of combat actions on the territory of Ukraine," Ukrainian presidential adviser Mikhaylo Podolyak told reporters.

Without going into detail, Podolyak said that both sides would return to their capitals for consultations over whether to implement a number of "decisions."

"The parties discussed holding another round of negotiations where these decisions can develop," he said.

Ukrainian forces have so far managed to stave off Russian ground forces massed less than 20 miles north of the embattled capital Kyiv — but though they've defied US intelligence predictions that the city would likely fall within one to four days of a full-scale Russian assault, US officials warn that Russian President Vladimir Putin could imminently increase the intensity of the attack.

Stiffer than expected Ukrainian resistance and Russia's own logistical missteps have bogged down Russia's advance, US and Western officials say, sparking a fragile optimism. The US has also continued sharing downgraded intelligence with the Ukrainians, including about Russian military moves, in an attempt to help Ukraine on the battlefield, two of the sources told CNN.

But intelligence and defense officials closely tracking the Russian campaign say Putin still holds a number of moves in reserve that could devastate the Ukrainian resistance.

"From a purely military/tactical standpoint, Russia has the manpower and firepower to take Kyiv. No question," said an American source familiar with the intelligence. "And no matter how much resistance the Ukrainians put up."

Roughly a quarter of Russia's amassed troops have yet to enter Ukraine, a senior defense official told reporters on Monday — a potential "second wave," according to two sources familiar with the intelligence — and defense officials say Putin could yet order a far less restrained bombing campaign, including airstrikes, long-range missiles and artillery.

"They have been slowed and they have been frustrated by their lack of progress on Kyiv, and one of the things that could result is a reevaluation of their tactics and the potential for them to be more aggressive and more overt in both the size and the scale of their targeting of Kyiv," a senior defense official told reporters on Monday. 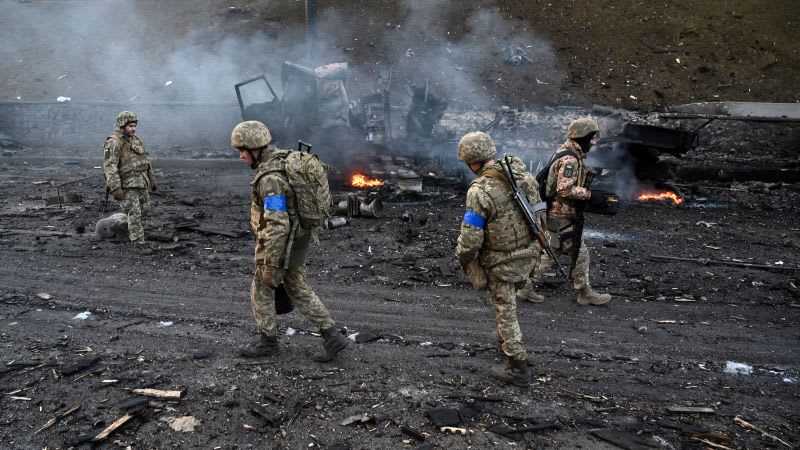 Twitter will now label all content that contains links to Russian state media and will demote that content algorithmically, the company said, as tech platforms have come under greater pressure to respond to Russia's invasion of Ukraine.

The move goes beyond previous steps that Twitter has taken in years past to label Russian state media accounts on the platform.

Since the invasion began, the "overwhelming majority" of Russian state media content appearing on Twitter has been shared by individuals, not the state media organizations' own accounts, the company said. Over the past week, individuals have shared more than 45,000 tweets per day containing media from Russian state outlets.

Monday's change will mean that any link shared by a user to a Russian state media organization's website will automatically receive a label, warning viewers that the tweet "links to a Russia state-affiliated media website."

"In addition to the label, we will reduce the visibility and amplification of this content site-wide, no matter who it comes from," said Twitter spokesperson Trenton Kennedy. "This means that Tweets sharing state media content won’t be amplified — they won’t appear in Top Search and won’t be recommended by Twitter."

Content from state media outlets of other countries will also receive the same treatment "in the coming weeks," Kennedy added.

More context: Twitter has not permitted advertising by state-run media outlets since 2019, and the company suspended all ads in Ukraine and Russia last week amid the unfolding crisis to prioritize public safety information.

The move follows requests by government leaders for tech giants to clamp down on pro-Russian propaganda, including by applying algorithmic controls that limit the amplification and recommendation of Russian-backed media.

See how other social media companies are responding to Russia's invasion: 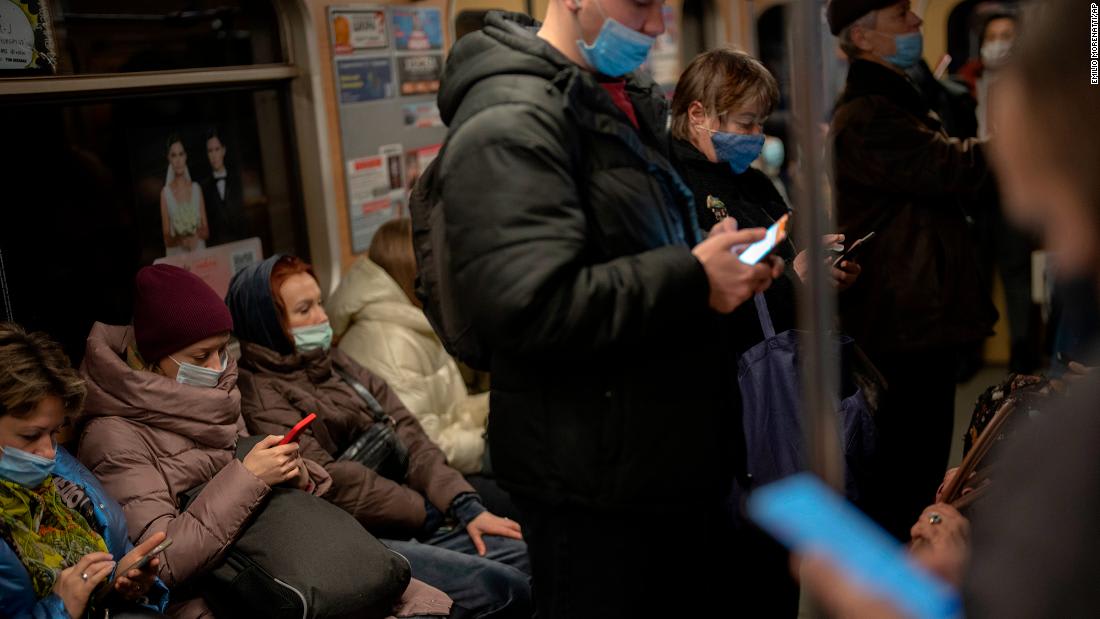 On Sunday, Russia’s close ally Belarus held a referendum, the result of which — in theory — opens the door for the former Soviet republic to host nuclear weaponry.

With the collapse of the Soviet Union in 1991, newly independent states in addition to Russia appeared on the map with nuclear weapons stationed on their territory: Belarus, Ukraine and Kazakhstan.

The prospect of three new countries armed with nuclear weapons alarmed world leaders, and with the signing of the Budapest Memorandum in 1994, the three agreed to give up their nuclear arsenals in exchange for security guarantees.

The vote in a referendum to approve a new constitution allows Belarus to shed its non-nuclear status. But does that mean it can acquire nuclear weapons? After all, the country does not have a weapons complex for designing, building or testing nuclear weaponry.

Belarusian President Alexander Lukashenko seems to be hinting at something else: stationing Russian warheads on Belarusian soil.

Addressing journalists at a polling station in Minsk on Sunday, Lukashenko said he could ask his Russian counterpart Vladimir Putin to “return the nuclear weapons” Belarus formally gave up when his country signed up to the Budapest Memorandum.

"If America, or you France, two nuclear powers, start transferring nuclear weapons to Poland or Lithuania, on our borders... I will go to Putin so that he will return to me the nuclear weapons that I, without any special conditions, gave to them," Lukashenko said.

Poland and Lithuania do not possess nuclear weapons.

It’s unclear what plans Russia may have, in practice. But it’s worth noting that, days before Russia started its invasion of Ukraine, Lukashenko sat in the Kremlin situation center with Putin to observe nuclear drills, watching the launch of a series of missiles at different test ranges.

There are several layers of irony in the nuclear rhetoric over Belarus: In stating his case for the invasion of Ukraine, Putin has made a baseless claim about supposed Ukrainian aspirations to acquire nuclear weaponry, something the Kremlin leader cast as an existential threat.

And it’s worth remembering that Ukraine gave up its own nuclear stockpile in exchange for security guarantees to its territorial integrity from several countries — including Russia — that Putin has now broken.

“Football is fully united here and in full solidarity with all the people affected in Ukraine,” the joint statement said on Monday. “Both (FIFA and UEFA) Presidents hope that the situation in Ukraine will improve significantly and rapidly so that football can again be a vector for unity and peace amongst people."

Shortly after this joint announcement, UEFA said it has ended its partnership with the Russian state-owned energy company, Gazprom, across all competitions, effective immediately.

UEFA made the announcement on Monday, saying, "The decision covers all existing agreements including the UEFA Champions League, UEFA national team competitions and UEFA EURO 2024."

Battered by intense shelling, peppered with gunfire and then ... everything goes quiet.

The small city of Mykolaiv, located on an inlet that would be a useful access point for Russians to bring in troops and supplies, was on Monday picking up the pieces from a weekend of heavy fighting that saw Ukrainian hardware destroyed and civilians targeted.

Broken glass and burnt-out tanks littered the streets. The skyline was dominated by the unusual site of a raised road bridge, the structure elevated for the first time in years to hamper any further ground incursions.

And in the air, as well as the sound of intermittent air raid sirens, the mystery of what Russia's probing attacks in Mykolaiv and other Black Sea towns are trying to achieve.

They've clearly managed to instill fear. Ukrainian troops were on edge in the wake of the fighting, wary of the threat of saboteurs. As CNN toured the city, we saw people pulled from cars and thrown to the ground, suspected to be infiltrators.

Ukrainian troops were trying to put on a brave face. Guarding the wreckage of military vehicles, clearly hit by a ballistic missile with significant firepower, one soldier initially claimed they were Russian before admitting they belonged to Ukrainian forces.

The fighting along this region of the Black Sea has been some of the most intense in Ukraine in the past few days, with unconfirmed reports of Russian paratroopers on the ground, as well as very visible blasts lighting up the skyline.

Yet, in similar strikes on other towns, it's been almost the same picture. Intense Russian bombardment followed by a pause that has allowed the Ukrainian side to claim victory. 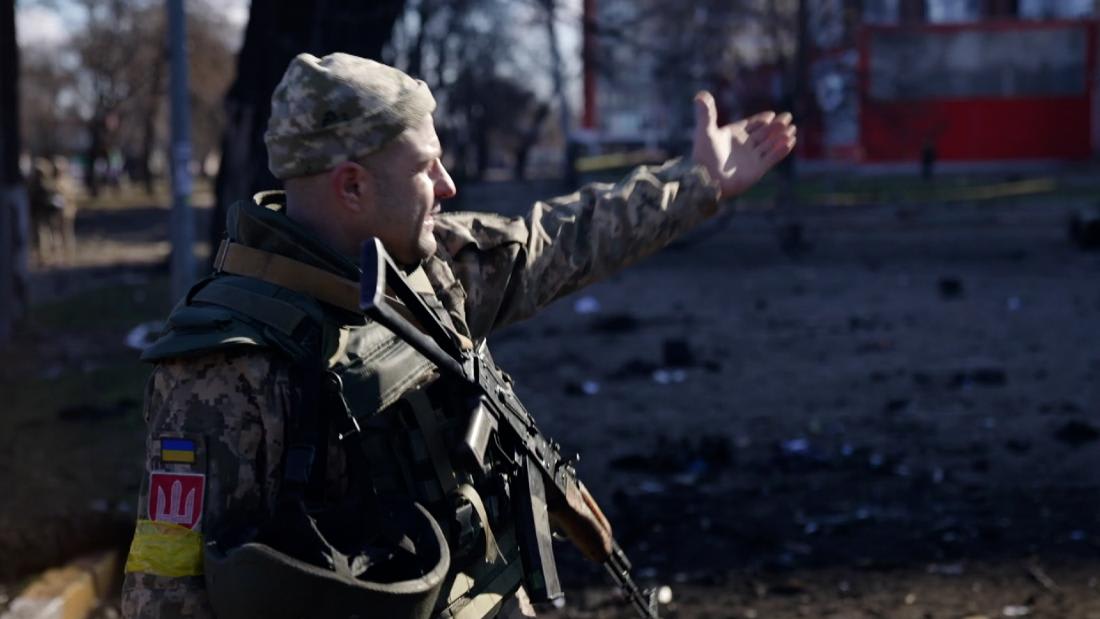