US and Ukraine at odds over threat of Russian invasion

Gen. Mark Milley, chairman of the Joint Chiefs of Staff, said the troop movements from Russia along the border with Ukraine and into Belarus are “different” from what the US has seen “in recent memory,” during a joint press briefing with the Secretary of Defense at the Pentagon today.

“It does feel different,” Milley said. “This is larger in scale and scope in the massing of forces than anything we’ve seen in recent memory, and I think you’d have to go back quite a while into the Cold War days to see something of this magnitude.”

Milley said these movements are different from Russian troop annual exercises, which the Pentagon watches closely.

“They do annual exercises, and we watch those closely. But this is different. So, we’ll continue to monitor very, very closely. But yet it does feel different,” Milley said.

Meanwhile: In spite of the ratcheting warnings of impending war in Ukraine, the Kremlin has signaled that diplomatic discussions between Russia and the West will press on — at least for now. Russia's Foreign Minister Sergey Lavrov reiterated on Friday that Moscow did not want war with Ukraine.

The US hasn't "actually moved any troops" in response to the buildup of Russian troops on Ukraine's border, Department of Defense Secretary Lloyd Austin said.

"We put troops on higher alert. And the second point that I would make is that even if and when we do move troops, the purpose of those troops deploying would be to reassure allies or directly in support of [the North Atlantic Treaty Organization] both. So I think that, again, before we make any decisions on readiness or movement of troops, we always take those things into mind ... the impact on other leaders," Austin said.

Chairman of the Joint Chiefs of Staff Gen. Mark Milley said the US is "increasing our readiness levels."

Earlier in his remarks, Milley said that "there is a small contingent of US and NATO advisers and trainers currently in Ukraine. The United States has zero offensive combat weapon systems, nor any permanent forces nor bases in Ukraine."

"Our role is limited in that we help train, advise and assist with tactics, techniques and procedures. We participate in institutional development with the Ukrainian Ministry of Defense. As the secretary of defense has noted, we continue to provide military material support to Ukraine along with many other countries from NATO. And we are ready, capable and prepared to uphold our obligation under treaty to NATO. As mentioned by the secretary, an attack against one NATO ally is an attack against all," he said.

The Department of Defense will “continue to provide President Biden with options to defend” US national security interests in “response to Russian actions,” Secretary of Defense Lloyd Austin said during a news briefing at the Pentagon on Friday.

Austin also said the Department will “contribute” to NATO response forces and “coordinate” with NATO allies in the face of Russian aggression.

“The United States will contribute to NATO’s response forces, and we will coordinate with our NATO allies, and we will make sure that they have the capabilities they need to defend themselves,” Austin said.

Austin said there is “no reason” the situation between Russia and Ukraine has to “devolve into conflict,” but “whatever he decides, the United States will stand with our allies and partners.”

Chairman of the Joint Chiefs of Staff Gen. Mark Milley said "we strongly encourage Russia to stand down" and to pursue a resolution regarding Ukraine "through diplomacy."

"Armed force should always be the last resort. Success here is through dialogue," said in a Pentagon press briefing. 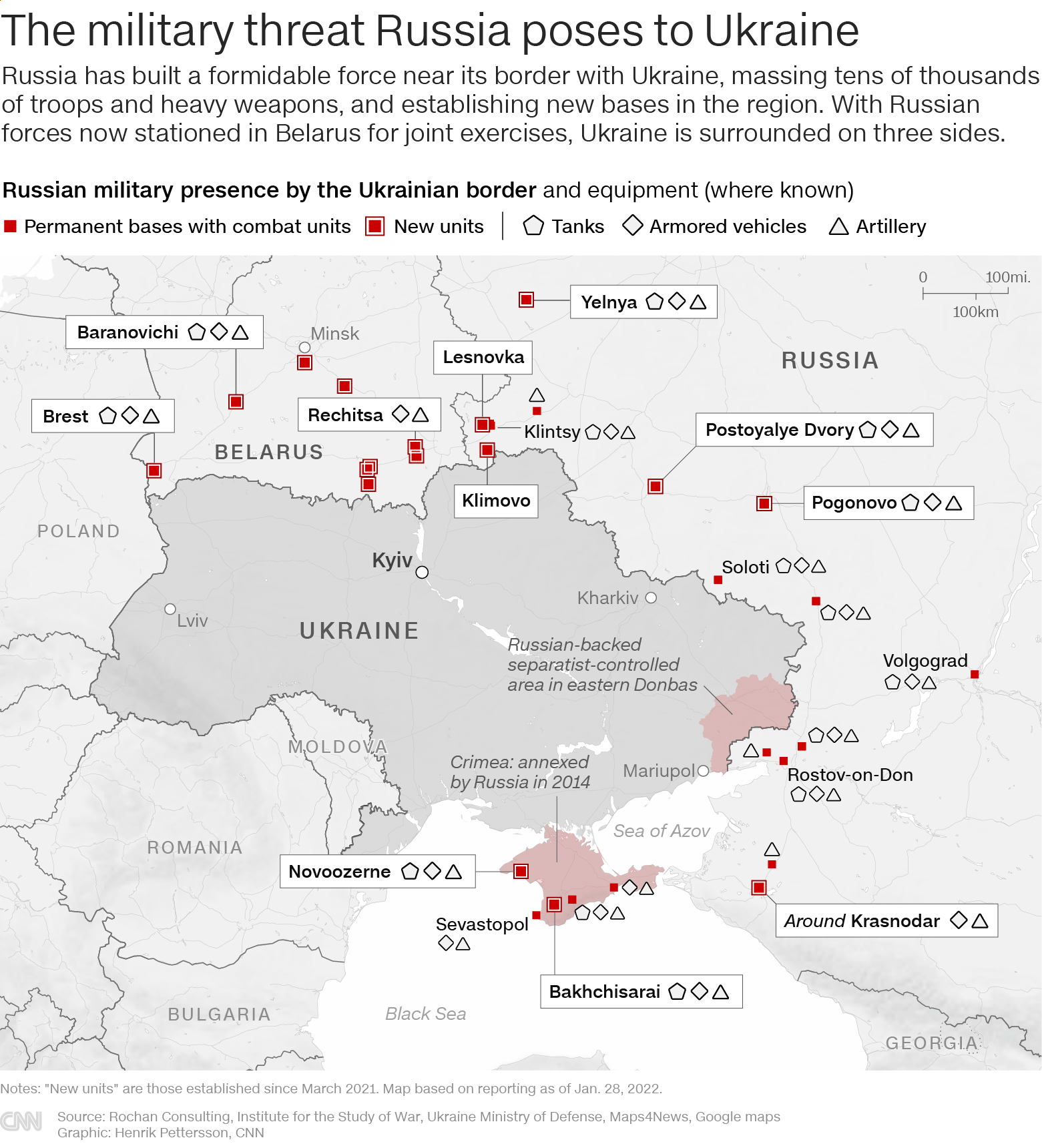 Speaking at a briefing on Friday, Defense Secretary Lloyd Austin said conflict with Russia over Ukraine "is not inevitable."

"There is still time and space for diplomacy. The United States, in lockstep with our allies and partners, has offered Russia a path away from crisis and toward greater security. The Department of Defense will continue to support those diplomatic efforts," he said.

Austin also reiterated US support for Ukraine through security assistance material and for "standing shoulder to shoulder" with NATO allies.

While tensions between Russia and Ukraine are at their highest in years, the Kremlin has also said it does not want conflict.

"We don't believe that President Putin has made a final decision to use these forces against Ukraine. He clearly now has that capability. And there are multiple options available to him, including the seizure of cities and significant territories, but also provocative political acts like the recognition of breakaway territories. Indeed, we're seeing Russian state media spouting off now about alleged activities in the eastern Ukraine. This is straight out of the Russian playbook. And they're not fooling us," he told reporters at a briefing.

Austin also said the department is on the lookout for Russian misinformation.

"Any Russian attack or further incursion into Ukraine would not only ignite conflict, it would also violate the bedrock principles of national sovereignty, territorial integrity and self-determination," Austin said.

"This is something that we're taking very seriously, both as a strong partner of Ukraine and as one of 30 members of NATO. We're unified in opposition to Russia's attempts to undermine those core values and threaten peace and security in Europe," he said.

Ukraine President Volodymyr Zelensky said the decision by the United States and United Kingdom to withdraw some staff from their embassies in Kyiv was a “mistake.”

“I think it was a mistake,” Zelensky told foreign journalists in Kyiv on Friday. “I say this openly.”

“The signals that we were getting from the diplomats, these nonessential staff, I don't think so. Under these circumstances, everyone is essential. Everyone should stay, to be honest,” Zelensky added.

The Ukrainian president went on to give Greece as an example, which had kept its diplomats in Mariupol, a city on the frontline in eastern Ukraine.

“In the city of Mariupol, which is on the contact line, where the contact line is very close, where you can hear cannons fire, the Greeks didn't take anyone away,” Zelensky said. “Everyone is looking at this everyone understands which countries of EU respond to how the Britain, how the United States react.”

Zelensky added that he thought US and British diplomats should stay in Kyiv, comparing them to ship captains, who in his view should be the last ones to leave.

“These are the captains of the diplomatic corps, they're the representatives of their respective countries,” he explained. “And the captains are the last who should be leaving the ship."

“I don't think we have a Titanic here; Ukraine is moving forward,” he said.

Ukrainian President Volodymyr Zelensky said he is ready to meet with his Russian counterpart, President Vladimir Putin, but noted that a conversation between the two would have to be "serious."

“I'm not afraid of any format of the meeting bilateral, OK, I don't care, I'm ready,” Zelensky said in news conference with foreign journalists on Friday. “I mean, it has to be serious. People don't understand the value of the human life and that's what it's about. I do support serious dialogue.”

Tensions between Ukraine and Russia are at their highest in years, with a buildup of Russian troops continuing near the border between the two countries.

Zelensky said earlier to journalists that he recognized the threat from Russia was “imminent” and “constant,” but added that his country as learned to live with it.

Ukraine President Volodymyr Zelensky called on the leaders of western nations to not say that a Russia-Ukraine war “will start tomorrow” as this sows panic and damages the Ukrainian economy.

“I started talking to the leaders of the countries and to explain to them that we need to stabilize the economy,” he explained. “They are saying 'tomorrow is the war.' This means panic. Calm the market panic in the financial sector.”

While speaking to foreign journalists on Friday, Zelensky also said he recognized the threat from Russia was “imminent” and “constant,” but added that his country as learned to live with it.