Chairman of the Joint Chiefs of Staff Gen. Mark Milley took part in a virtual meeting of NATO's Military Committee in Chiefs of Defence on Monday amid the Russian invasion of Ukraine, a readout from Joint Staff spokesperson Col. Dave Butler said.

The leaders discussed "Russia’s invasion of Ukraine, which is undermining global security," the readout said. "The United States’ commitment to defending NATO territory is ironclad and the United States will continue to bolster our posture to better defend our NATO Allies."

The US has sent additional troops and military assets to NATO countries in the past few weeks as the situation in Ukraine has worsened.

The Secretary of Defense ordered the deployment of 7,000 US service members to Europe on Feb. 25, a senior defense official told reporters.

It’s easy to trace where those hundreds of tanks, towed artillery, armored and logistical vehicles came from. Just follow the roads.

In Ukraine, northwest of Kyiv, all roads lead to Belarus. The roadway and bridge at Chernobyl — the town, not the failed nuclear reactor — ends in Belarus. Every other major road northwest of the Ukrainian capital, Kyiv, ends in Belarus, which borders northern Ukraine.

Russian buildup of troops: For weeks prior to its invasion of Ukraine, Russia amassed its forces in Belarus.

Hundreds of Russian military vehicles, aircraft and helicopters were moved to the former Soviet state in order to participate in what the two allies described as joint exercises. But after the maneuvers ended, the Russian forces didn’t go home.

In fact, additional satellite imagery from Maxar showed that Russia continued to increase the amount of military vehicles, air power and weaponry in Belarus. From the city of Brest in the country's east, to Gomel in the west, Russian forces kept popping up at air bases, in towns and in even in fields on satellite images and social media.

Pontoon bridge: Satellite images even showed that Russia constructed a pontoon bridge across the Pripyat River in the greater Chernobyl exclusion zone, which spans Ukraine and Belarus. The day the invasion into Ukraine began, additional satellite images from Capella Space showed Russia began moving dozens of military vehicles across that bridge.

Military power: The sheer length of the convoy is massive and speaks to the amount of the military power the Russians have amassed to try and take Kyiv.

It also speaks to Belarus’ activity in supporting and carrying the invasion — and responsibility for it.

That military power could not have been amassed by the Russians without the permission, and assistance, of Belarus.

Australia will send missiles as part of a $50 million package of lethal and non-lethal aid to help Ukraine repel Russian forces, according to Prime Minister Scott Morrison.

"We are answering the call from President (Volodymyr) Zelensky: he said we need ammo, not a ride and that's exactly what we're doing... we'll provide 50 million US dollars to support Ukraine, lethal and non-lethal support... we're talking missiles, we're talking ammunition," Morrison said.

A further $25 million will go toward humanitarian support and helping international organizations meet the needs of people fleeing violence inside Ukraine, he said.

Tuesday's announcement follows a raft of measures by the Australian government to punish Russia for its invasion of Ukraine, including placing sanctions on Russian individuals.

Vitali Klitschko, mayor of Ukraine’s capital, Kyiv, told CNN's Anderson Cooper that he is proud of Ukrainian citizens for defending their country and sees the battle ahead as a fight for its future.

Klitschko said Kyiv is under a "non-stop" attack by Russian troops and what he called "Russian aggression groups."

"We listen to explosions every hour during last night, all last night, the last four days. People are very nervous, they spend a lot of time in bunkers," he said.

Calling Ukrainian soldiers "heroes," Klitschko said he is proud of the country's army and civilians who have taken up arms to defend the capital.

Klitschko said he was "not ready" to answer how long Kyiv could hold out against the Russian invasion but added it could be a "long time."

In a message to Russian President Vladimir Putin, the mayor said Ukraine used to be part of the Soviet Union and it doesn't want Russia back.

Klitschko is a former heavyweight boxing champion known as “Dr. Ironfist” and has been mayor of Kyiv since 2014.

Russian tennis players are calling for an end to their country's invasion of Ukraine.

Anastasia Pavlyuchenkova, a WTA veteran ranked No. 14 in the world and 2021 French Open finalist, said on Twitter she was not afraid to state her position: “Stop the violence, stop the war.”

Daniil Medvedev, who became the world No. 1 in men’s singles on Monday, said he had "mixed emotions" about his feat.

“It’s a huge honor to take over this spot. I’m sure everyone can understand it comes with mixed emotions that it happens this week," he said on Twitter.

Anastasia Potapova, who was scheduled to play Ukrainian Elina Svitolina in the opening round of the WTA 250 event in Monterrey, Mexico, on Tuesday said professional athletes "are essentially becoming hostages of the current situation."

"Playing tennis is our choice and our dream, to which we go daily, practicing, and constantly trying to be better in our results. I’m sorry, but even though I am a stranger to politics, I am against grief, tears and war," she said.

Context: Svitolina said she will not play in the match Tuesday and refuses to play any Russian or Belarusian player, saying she wants tennis organizations to follow the recommendations of the International Olympic Committee to accept Russian or Belarusian nationals only as neutral athletes.

Andrey Rublev, who wrote “No War Please” on a camera at an ATP 500 event in Dubai and later went on to win the tournament, said on Twitter: “Now it’s not about tennis."

Meanwhile, American tennis player Amanda Anisimova, ranked No. 42, whose mother and late father were from Moscow said on Twitter there is “#nohumanity” and "no words for what is happening."

"It is important that all members of the international community respond resolutely to Russia's acts," Kishida told reporters in a news conference after a call with G7 leaders and allies.

Kishida said the G7 nations — Canada, France, Germany, Italy, Japan, the United Kingdom and the United States — and their partners had also agreed to help Ukrainian refugees following the Russian invasion of Ukraine.

As a Prime Minister hailing from Hiroshima and representing a country that had suffered nuclear attacks in the past, Kishida said any use of nuclear force is unacceptable.

During World War II, the US dropped two atomic bombs on the Japanese cities of Hiroshima and Nagasaki, killing about 116,000 people in total in the initial blasts, according to the US Department of Energy.

Ukrainian resistance to the Russian invasion has shown strength that has surprised many observers, but one international expert pointed out how historical precedent bodes poorly for Moscow should its forces be unable to subdue Ukraine quickly under current Russian troop levels.

“The Russian army is overextended and in a precarious position if Ukraine becomes a protracted war,” Seth Jones, vice president of the Center for Strategic and International Studies, said in a social media post.
“Assuming 150,000 Russian soldiers in Ukraine and a population of 44 million, that is a force ratio of 3.4 soldiers per 1,000 people. You can’t hold territory with those numbers,” Jones said.

Jones compared the current Russian force ratio to occupations after previous wars around the world, saying successful occupations had force ratios that were “astronomically higher.”

For example, he said:

“High numbers of troops and police are critical to establish basic law and order,” Jones said.
“In fact, the number of Russian soldiers in Ukraine aren’t even enough to hold any major cities for long.”

And if Russian occupiers face a guerrilla war in the event the Ukrainian government falls, the odds won’t be in Russia’s favor, he said.

“They will be in serious danger of being picked apart by Ukrainian insurgents.”

Disney, Hollywood's largest and most influential movie studio, is pausing the release of its theatrical films in Russia following the country's invasion of Ukraine.

"Given the unprovoked invasion of Ukraine and the tragic humanitarian crisis, we are pausing the release of theatrical films in Russia, including the upcoming 'Turning Red' from Pixar," a Disney spokesperson said in statement on Monday.
"We will make future business decisions based on the evolving situation."

Disney had multiple films set for release in Russia in the coming months. That includes Marvel's "Doctor Strange in the Multiverse of Madness" on May 5 and Pixar's "Lightyear" on June 16.

Although Russia is not a major movie market like China and the United States, the move to pull films from the country, at least for the time being, is notable and could prompt other movie studios to follow suit. 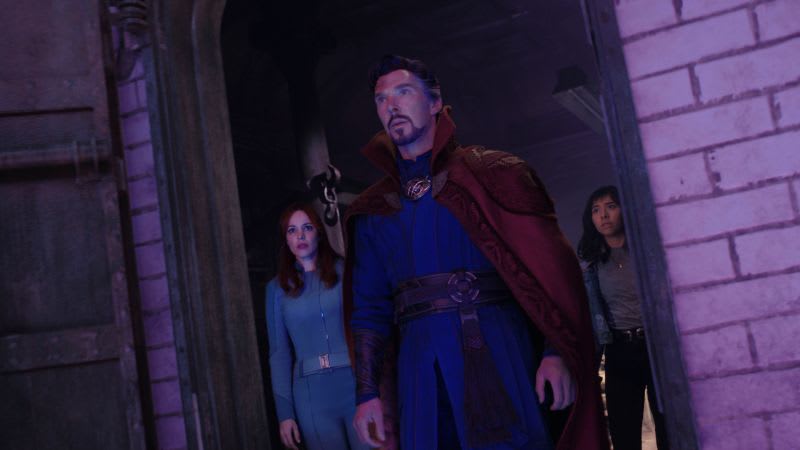 US Secretary of State Antony Blinken has condemned reports of “Russia’s attacks on Ukrainian cities and mounting civilian deaths,” according to the State Department.

Blinken made the comments while on a call with Ukrainian Foreign Minister Dmytro Kuleba on Monday.

"The Secretary offered steadfast solidarity with the Ukrainian people, who are bravely resisting and repelling a brutal, premeditated, and unprovoked Russian invasion, according to State Department spokesperson Ned Price.