The US is suspending operations at the US embassy in Belarus and also allowing non-emergency employees and family members to depart the US embassy in Russia due to safety and security issues resulting from Russian aggression towards Ukraine, Secretary of State Tony Blinken said in a statement.

“The U.S. Department of State has suspended operations at our Embassy in Minsk, Belarus and authorized the voluntary departure (“authorized departure”) of non-emergency employees and family members at our Embassy in Moscow, Russia. We took these steps due to security and safety issues stemming from the unprovoked and unjustified attack by Russian military forces in Ukraine,” Blinken said on Monday morning.

Blinken cited the department’s highest priority being the safety and security of US citizens, including US government personnel worldwide.

“The Department of State continually adjusts its posture at embassies and consulates throughout the world in line with its mission, the local security environment, and the health situation. We ultimately have no higher priority than the safety and security of U.S. citizens, and that includes our U.S. government personnel and their dependents serving around the world,” Blinken said.

“Half a billion euros [$560 million] will be devoted to providing defensive arms, high-calibre arms, and anti-tank [equipment] — all kinds of agreements in order to repel the aggression,” Borrell said.

“We have to coordinate what we are doing and what we can do additionally with these resources,” he added.

Borrell’s remarks, ahead of a virtual meeting of EU defense ministers on Monday, come after European Commission President Ursula von der Leyen announced that the EU would, for the first time, finance the purchase and delivery of weapons and other equipment to a country that is under attack.

This is a watershed moment,” von der Leyen said Sunday.

Addressing reporters in Brussels, Borrell said that Ukrainian forces are “resisting” Russia’s invasion in parts of the country – including Kyiv, Kharkiv and Mariupol – with Russia’s forces suffering a “high toll” in casualties, according to the EU representative.

The EU foreign affairs chief also stressed that the international community cannot allow a situation where a “powerful country smashes their neighbor using its military capacities.”

“If we allow this, it is the law of the jungle,” he added.

In Ukraine's capital, Andrii Tereshko says he has been feeling frustrated as he waits to enlist to fight for his country, "but the line is too long."

The 26-year-old software developer wanted to join territorial defense units but he was met with long wait lines on Sunday.

"They took 100, then told us to come tomorrow. Today, I tried to enlist but they said they are full and they don’t have more weapons," he told CNN.

When the tensions started escalating, Tereshko says everyone was scared because he, like many else, didn't know what to expect.

"But we always hoped that nothing would happen. No one expected full-scale invasion," he said. "When I woke up on Thursday to full-scale invasion, I was less scared ... When war started, I felt like I focused more. There is only one thing now — protect my country. That’s the only thing now."

Americans overwhelmingly favor increased economic sanctions against Russia and broadly support further action to stop Russia's invasion of Ukraine, but most oppose direct US military action, according to a new CNN poll conducted by SSRS.

Eighty-three percent of Americans said they favored increased economic sanctions against Russia in response to the invasion, with just 17% opposed.

New sanctions and economic restrictions aimed at Russia were announced by the US and other countries while the poll was in the field on Friday and Saturday. Support for increased sanctions in the new poll stands well above the 67% who favored the same in 2014 amid Russia's incursion into eastern Ukraine and its annexation of Crimea.

A smaller majority, 62%, also wanted to see the US do more to stop Russian military action in Ukraine, with 38% saying the country has already done enough. But the public is opposed to direct military action by the US: Only 42% were in favor of such a move should sanctions fail to work, with 58% opposed.

Among those who said the US should do more to stop Russia's military incursion, though, 58% were in favor of the use of military action if sanctions failed.

There's little sign that the public is rallying around President Joe Biden's response to the crisis, despite the broad support for the type of sanctions his administration has put in place. Just 42% said they trust Biden at least moderately to make the right decisions regarding the situation in Ukraine, about on par with his overall approval rating in recent polling. These results, like most of Biden's numbers, are deeply polarized, with 84% of Democrats but just 9% of Republicans saying they trust his decision-making at least moderately. 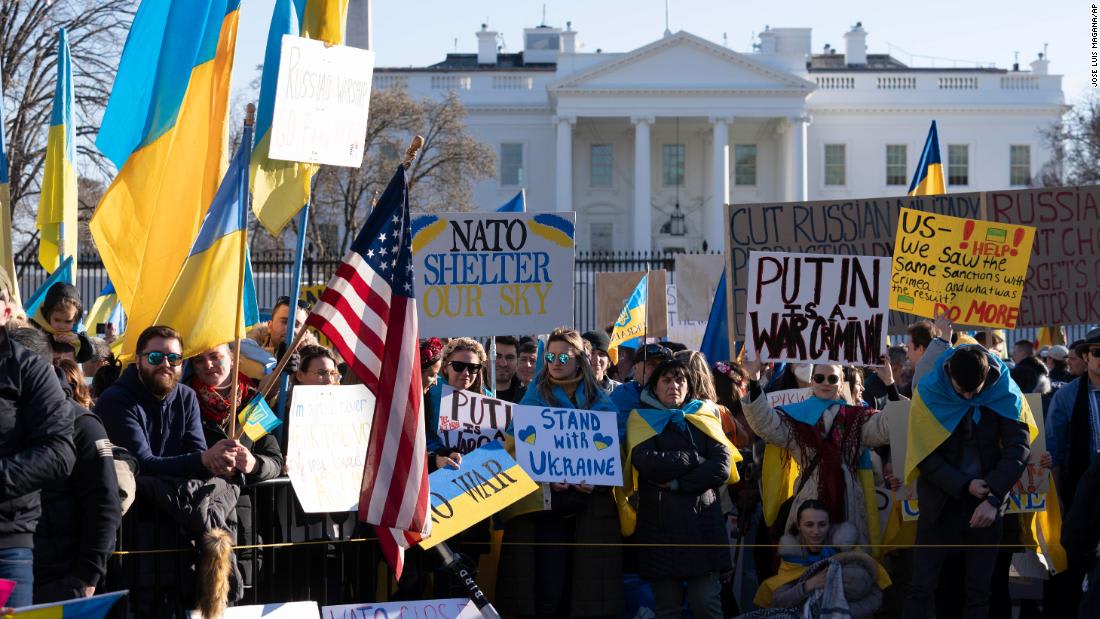 CNN poll: Most Americans want US to do more to stop Russia, but most also oppose direct military action

Several Russian media websites appear to have been hacked and at least three are currently displaying an anti-war message.

“Dear citizens. We urge you to stop this madness, don’t send your sons and husbands to certain death. Putin makes us lie and puts us in danger,” a message written in Russian on the Forbes Russia, Fontanka, Takie Dela websites and seen by CNN says.

“We have been isolated from the whole world, oil and gas are no longer traded. In a few years, we will be living like in North Korea,” it added.

Why do we need this? To put Putin in textbooks? This is not our war, let's stop him!,” the message reads.

The message is signed by Anonymous, the hacking collective, and by a group who say they are “journalists who care.”

“This message will be deleted and some of us will be sacked or even jailed. But we can’t put up with this any longer,” they said.

CNN cannot independently verify the Reuters and social media reports as the message appears to have been taken down.

Unexploded grenades, smoking vehicles and dead bodies litter a scorched bridge near Kyiv after a Russian attack was repelled by Ukrainian forces.

CNN’s Matthew Chance walked through the aftermath of the scene on Monday, where charred debris litters the ground and the remains of Russian soldiers lay abandoned on the tarmac.

Heavy-duty military vehicles were reduced to rubble in the fighting, with Western anti-tank missiles assisting in the Ukrainians' defence, Chance said.

The Russian column has been absolutely hammered," he said.

“Ukrainian officials and Ukrainian soldiers who I’ve been speaking to over the last couple of hours are absolutely enthused by this victory," Chance said.

“It’s not just here. We’ve seen instances all over the country where Ukrainians have really pushed back against the Russians, and it’s really made them feel that they can win this war."

Russian forces have encountered "stiffer than expected" resistance from the Ukrainian military as well as unexpected difficulties supplying its forces, two senior US officials with direct knowledge told CNN on Sunday.

But Chance added that the question remains: “What will Russia do now?" He predicted a strong likelihood that Moscow could "double down and go in much harder" in response. “That is the big risk now for the Ukrainian military.”

The Vatican is willing "to facilitate" a dialogue between Ukraine and Russia to end the war, Secretary of State Cardinal Pietro Parolin said Monday.

Parolin, who is the number one ranking Vatican official after Pope Francis, told the Italian newspaper Corriere della Sera that he believes that "there is still and always room for negotiation. It is never too late."

Parolin added that the Vatican has been following with "great attention the events in Ukraine," and that it offers "its willingness to facilitate dialogue with Russia, is always ready to help the parties to resume this path."

Pope Francis once again on Sunday spoke on the conflict during his weekly Angelus prayer and asked the faithful to pray and invited "all to make March 2, Ash Wednesday, a day of prayer and fasting for peace in Ukraine."

Belarusian Foreign Minister Vladimir Makei welcomed delegations from Ukraine and Russia for talks on Monday, assuring delegates that they should feel “completely safe.”

“Dear friends, the President of Belarus asked me to welcome you and to provide everything for your work, as agreed with President Zelensky and President Putin. You may feel completely safe here. This is our sacred duty,” Makei said.

“President Lukashenko sincerely hopes that, during today’s talks, it will be possible to find solutions to all the questions of this crisis. All Belarusians are praying for this. Any proposals, in terms of organizing today’s meeting, will be considered and absolutely fulfilled,” he added. “We look forward to the results.”

The exact location of the talks between Russia and Ukraine on Monday has been kept secret for security reasons.

The talks are in Belarus, but the only location that has been announced is that they are on the banks of the Pripyat river in the Gomel region of Belarus.

Russian authorities have detained a total of 5,942 people for participating in anti-war protests across the country since the Kremlin ordered an invasion of Ukraine, independent monitoring site OVD-Info said on Sunday.

So far there have been no indications of protests on Monday.

Under Russian law, large demonstrations require protesters apply for a permit, which has to be submitted no more than 15 but no less than 10 days before the event. Heavy fines -- and in some cases even prison time -- can be imposed on those who protest without a permit.

Individuals are allowed to stage solo protests, but it is not unheard of for people to be detained for those as well.

On Thursday, Russia’s Investigative Committee warned that participation in any anti-war protest was illegal. It also said that offenses could be entered on participants’ criminal records which would “leave a mark on the person’s future”