The Vatican is willing "to facilitate" a dialogue between Ukraine and Russia to end the war, Secretary of State Cardinal Pietro Parolin said Monday.

Parolin, who is the number one ranking Vatican official after Pope Francis, told the Italian newspaper Corriere della Sera that he believes that "there is still and always room for negotiation. It is never too late."

Parolin added that the Vatican has been following with "great attention the events in Ukraine," and that it offers "its willingness to facilitate dialogue with Russia, is always ready to help the parties to resume this path."

Pope Francis once again on Sunday spoke on the conflict during his weekly Angelus prayer and asked the faithful to pray and invited "all to make March 2, Ash Wednesday, a day of prayer and fasting for peace in Ukraine."

Belarusian Foreign Minister Vladimir Makei welcomed delegations from Ukraine and Russia for talks on Monday, assuring delegates that they should feel “completely safe.”

“Dear friends, the President of Belarus asked me to welcome you and to provide everything for your work, as agreed with President Zelensky and President Putin. You may feel completely safe here. This is our sacred duty,” Makei said.

“President Lukashenko sincerely hopes that, during today’s talks, it will be possible to find solutions to all the questions of this crisis. All Belarusians are praying for this. Any proposals, in terms of organizing today’s meeting, will be considered and absolutely fulfilled,” he added. “We look forward to the results.”

The exact location of the talks between Russia and Ukraine on Monday has been kept secret for security reasons.

The talks are in Belarus, but the only location that has been announced is that they are on the banks of the Pripyat river in the Gomel region of Belarus.

Russian authorities have detained a total of 5,942 people for participating in anti-war protests across the country since the Kremlin ordered an invasion of Ukraine, independent monitoring site OVD-Info said on Sunday.

So far there have been no indications of protests on Monday.

Under Russian law, large demonstrations require protesters apply for a permit, which has to be submitted no more than 15 but no less than 10 days before the event. Heavy fines -- and in some cases even prison time -- can be imposed on those who protest without a permit.

Individuals are allowed to stage solo protests, but it is not unheard of for people to be detained for those as well.

On Thursday, Russia’s Investigative Committee warned that participation in any anti-war protest was illegal. It also said that offenses could be entered on participants’ criminal records which would “leave a mark on the person’s future”

The country demanded an “immediate ceasefire and withdrawal of Russian troops” in the lead-up to the meeting.

Moscow's stock exchange will not open Monday, the Russian Central Bank said, after the country's currency plummeted in the wake of Western sanctions.

The Russian Central Bank also said it would announce the opening times for Tuesday on the day, at 9:00 a.m. local time (1 a.m. ET)

The suspension of trading comes after the Russian currency, the ruble, plunged nearly 30% on Monday, as markets began to assess the impact of sanctions imposed by the United States and NATO allies on Russia over its invasion of Ukraine.

Long lines have been forming at supermarkets across Kyiv, after a 36-hour curfew lifted in the Ukrainian capital Monday.

The curfew was in place from 5 p.m. on Saturday until 8 a.m. on Monday morning and required all residents to stay at home.

A CNN producer who went to three supermarkets said the lines were extremely long and that shelves were emptying fast.

One person in a queue told CNN: “I think everyone in Ukraine is confused. I didn’t expect what happened, to happen. I am between feeling scared and totally angry.”

Many food stores were shuttered since bombings in Kyiv started last week. People have reported shortages of certain supplies.

The Kremlin declined to comment Monday on the progress of Russia's so-called “special military operation” in Ukraine, referring questions on the matter to the military.

“I don’t think this is the time to sum up the results of the [military] operation, we need to wait for completion of the operation,” Kremlin spokesperson Dmitry Peskov said in a conference call with journalists.

The Russian military has acknowledged casualties but has not given exact figures.

Moscow's invasion has encountered "stiffer than expected" resistance from the Ukrainian military as well as unexpected difficulties supplying its forces, two senior US officials with direct knowledge told CNN on Sunday.

Official civilian death toll reaches triple figures: The latest toll for civilian deaths in Ukraine stands at 102, with 304 people injured, but the true figure is feared to be “considerably higher,” the UN’s Michelle Bachelet said Monday.

The death toll includes seven children, Bachelet said, adding: “Most of these civilians were killed by explosive weapons with a wide impact area, including shelling from heavy artillery and multi-launch rocket systems, and air strikes.”

According to Bachelet, 422,000 people have fled Ukraine, while other civilians still in the country are “forced to huddle in different forms of bomb shelters, such as underground stations, to escape explosions.”

"We appeal to the European Union to urgently admit Ukraine using a new procedure," Zelensky said in his latest video message.

"We are grateful to partners for standing with us. But our goal is to be with all Europeans and, to be equal to them. I am sure we deserve it. I am sure it is possible."

Zelensky said he spoke on Sunday with the Presidents of Portugal, Lithuania, France and Poland as well as the Prime Ministers of Belgium, Spain and the United Kingdom. "Support of our anti-war coalition is unconditional and unprecedented," Zelensky said.

Russia's currency crashed to a record low against the US dollar Monday as the country's financial system reeled from crushing sanctions imposed by Western countries in response to the invasion of Ukraine.

The ruble lost more than 30% of its value to trade at 109 to the dollar at 2.30 a.m. ET after earlier plummeting as much as 40%. The start of trading on the Russian stock market was delayed.

The latest barrage of sanctions came Saturday, when the United States, the European Union, the United Kingdom and Canada said they would expel some Russian banks from SWIFT, a global financial messaging service, and "paralyze" the assets of Russia's central bank.

President Vladimir Putin's government has spent the last eight years preparing Russia for tough sanctions by building up a war chest of $630 billion in foreign currency reserves, but his "fortress" economy is now under unprecedented assault and at least some of that financial firepower is now frozen.

"We will also ban the transactions of Russia's central bank and freeze all its assets, to prevent it from financing Putin's war," European Commission President Ursula von der Leyen said in a statement Sunday.

The collapse in the currency prompted the Russian central back to implement emergency measures on Monday, including a huge hike in interest rates to 20% from 9.5%. 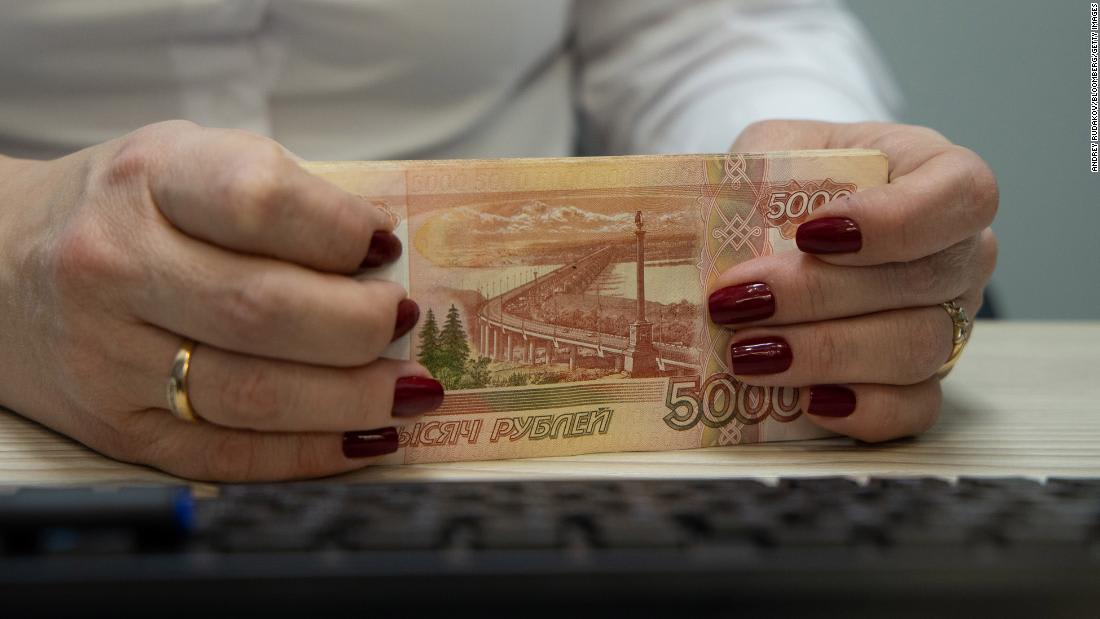 Russia's ruble crashes as its banking system reels from sanctions