As Ukrainian leaders urge residents to stand their ground and resist Russia's invasion, one television channel broadcast instructions on how to make Molotov cocktails on Friday.

The TV segment showed a person creating the makeshift explosive, pouring colored liquid into a glass bottle, with a diagram on the side showing how to stopper the bottle with a cloth wick.

Earlier Friday, the Ukrainian Defense Ministry tweeted that citizens should "make Molotov cocktails and take down the occupier," as Russian forces drew closer to the capital Kyiv.

Kira Rudik, a member of Ukraine's parliament, had been going about daily life just a few days ago, holding meetings and discussing legislation even as the threat of a Russian invasion loomed.

"And then one day, you just know they're coming," said Rudik, speaking to CNN from the capital city Kyiv. "And then you have to do something. And that's when you get a gun and then you learn how to shoot it."

Rudik posted a photo of herself holding a gun on Twitter late Friday, captioned: "Our women will protect our soil the same way as our men." The post has since circulated widely online, with more than 91,000 likes on Twitter.

"It was super unusual and super crazy for myself to understand and realize that I'm holding a gun and I'm ready to bear arms, and I'm ready to go and shoot other human beings," Rudik said early Saturday. "And the reason for that change was because Russian soldiers are coming to Kyiv and Russian soldiers are trying to take what is actually not theirs."

She and her family are now hiding in a bomb shelter as heavy fighting intensifies, with explosions heard and seen in the city in the early hours of Saturday.

But, she added, "We are actually fighting them very, very hard ... (Putin) underestimated the readiness of our army, and he underestimated that on every step of the way of his soldiers, they were given really hard resistance."

"People are arming themselves. People are fighting them for every inch of our soil," she said. "We are not leaving because this is our city. This is our country."

Russian forces have taken control of portions of northern Ukraine outside the capital of Kyiv, including the Chernobyl exclusion zone, according to analysis from the Institute for the Study of War in Washington, DC.

They've also moved into the city of Kherson, north of the Crimean peninsula. 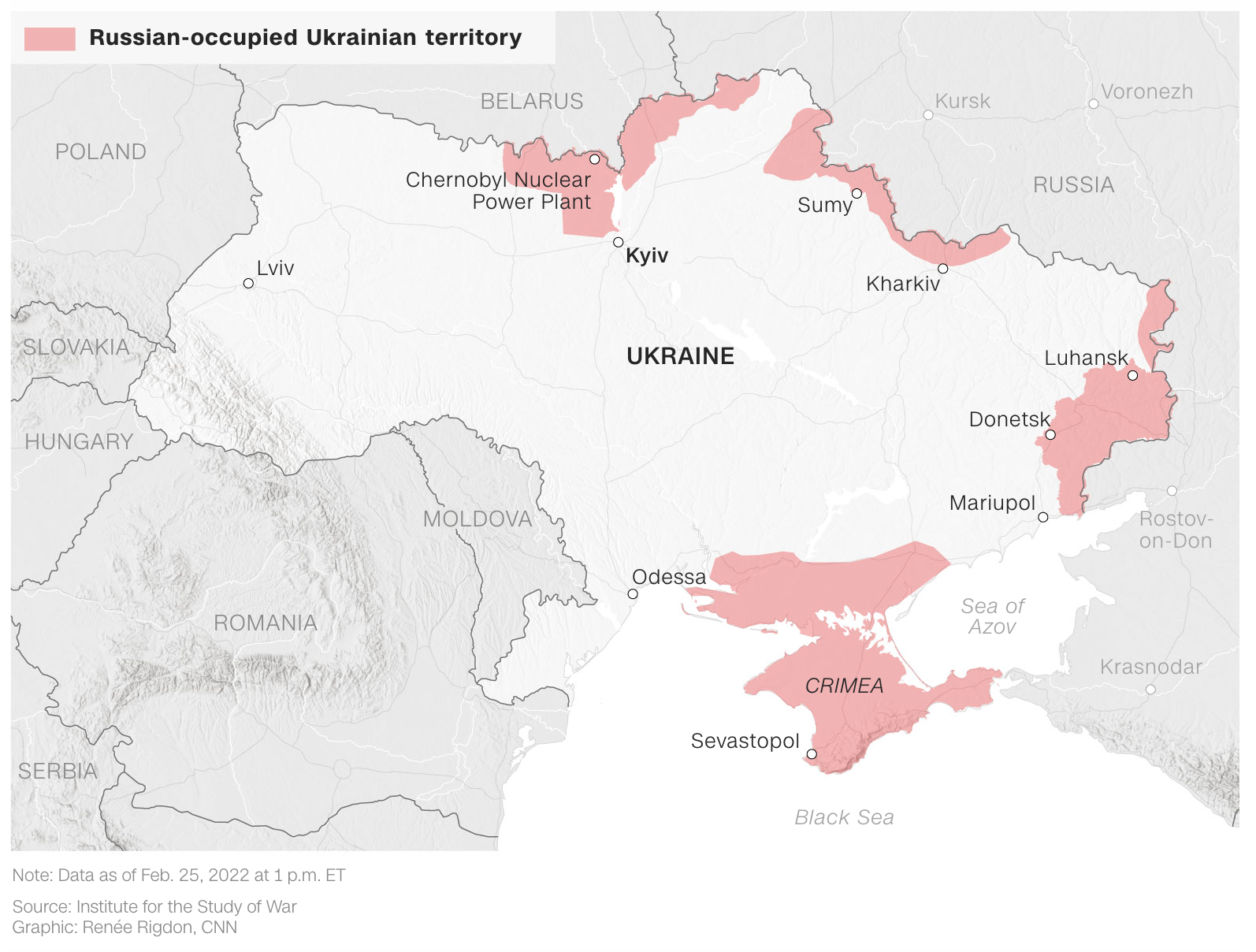 “We are here. We are in Kyiv. We are defending Ukraine.”

That was the title of a video posted on Facebook Friday night by Ukrainian President Volodymyr Zelensky, as he vowed to defend his country while standing on a Kyiv street with other leaders of his administration.

"Good evening everyone! Leader of the faction is here. Head of the president’s administration is here. Prime Minister (Denys) Shmyhal is here. (Adviser to the head of the President's Office Mykhailo) Podoliak is here. The President is here," said Zelensky, pointing to the various men around him as he spoke, ending with himself.

The rest of the group chimed in: "Glory to heroes!"

Zelensky's post, which has since gone viral online has been widely shared across different social media platforms.

Also on Friday night, Zelensky released a formal national address, confirming that Russian forces were close to the capital, advancing from the north and the east. He added that he was still communicating with world leaders including US President Joe Biden.

"Our main goal is to finish this slaughter," Zelensky said in the address. "Ukrainians resist the Russian aggression heroically."