Russian military vehicles are at the Chernobyl nuclear accident site near Pripyat, Ukraine, according to videos uploaded to social media.

Earlier on Thursday, the State Agency of Ukraine on Exclusion Zone Management spokesperson, Yevgeniya Kuznetsovа, told CNN that the Russian military had taken control over the plant.

"As you can see, we are surrounded by these tanks," an individual is heard saying on one of the videos posted to social media.

In the three videos, three vehicles are seen; one of the vehicles is a Russian tank and is emblazoned with a white "v" on the front.

The vehicles are parked outside of one of the main buildings in the same complex as Chernobyl's damaged nuclear reactor. They are roughly 3,000 feet from the New Safe Confinement shield.

"We were attacked," a man is heard saying in the video. "There is another man with us. They all just disappeared. The station is completely empty."

The man moved around a room in the complex building as he filmed.

"Damn it," he said. "They've even left their helmets, there is not a single ensign anywhere."

On Thursday, Ukrainian President Volodymyr Zelensky said on Twitter that Russian forces were attempting to seize control of the Chernobyl Nuclear Power Plant.

“Russian occupation forces are trying to seize the Chernobyl [Nuclear Power Plant]. Our defenders are sacrificing their lives so that the tragedy of 1986 will not be repeated,” Zelensky tweeted.

Here's a look at where the plant is located: 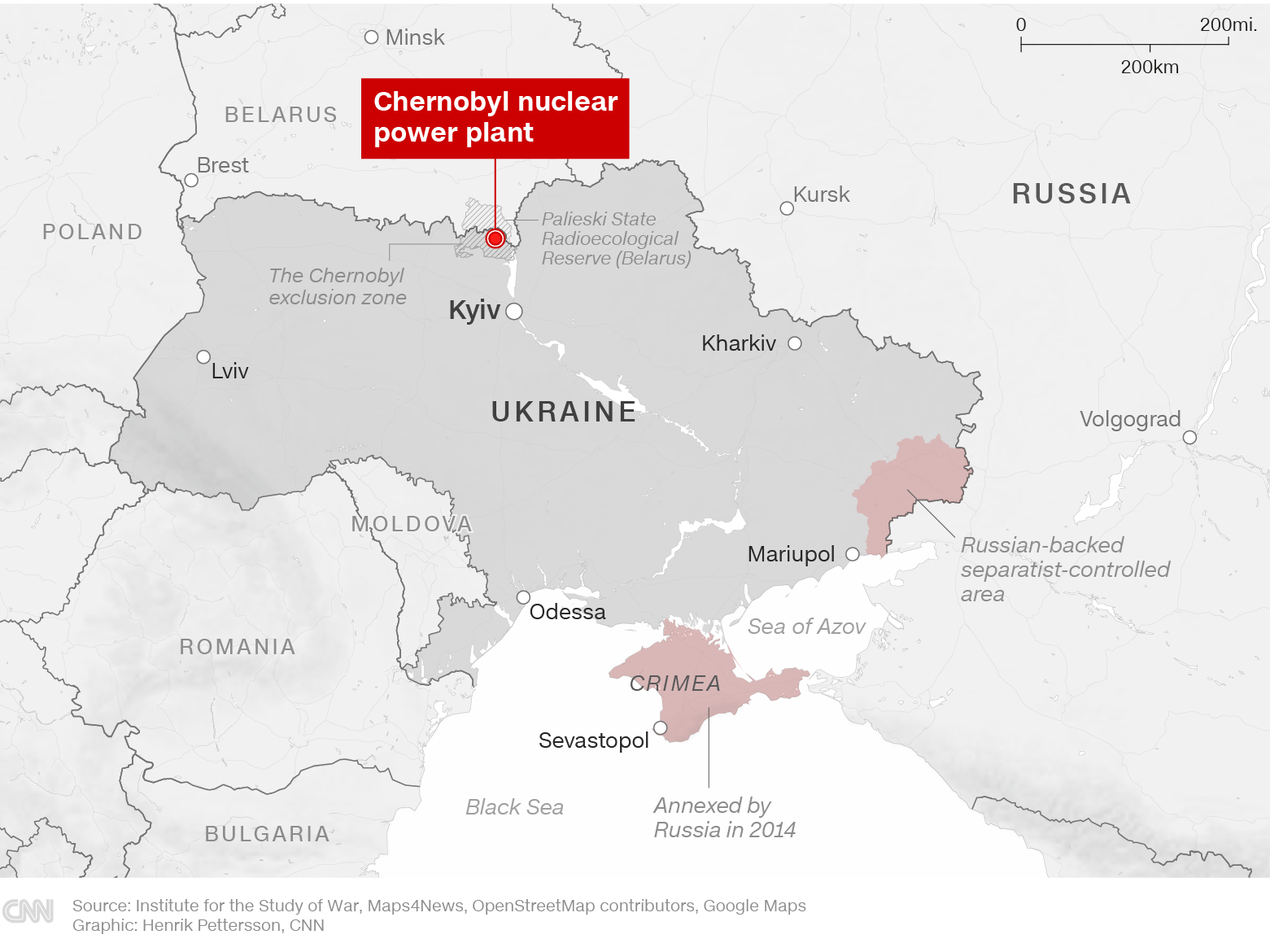 US President Joe Biden declined to comment when asked about whether China would help isolate Russia.

Following his remarks on the Russian invasion of Ukraine, a reporter asked the President, "Are you urging China to help isolate Russia?"

I'm not prepared to comment on that at the moment," Biden responded.

China's response to the invasion: China has refused to condemn Russia's attack on Ukraine Thursday, instead repeating calls for parties to "exercise restraint" and accusing the United States of "fueling fire" in the tensions.

In a Ministry of Foreign Affairs briefing that went on for more than 90 minutes, spokesperson and Assistant Minister of Foreign Affairs Hua Chunying dodged more than 11 questions regarding Russia's actions in Ukraine. They included repeated inquiries on whether Beijing would consider Russia's acts an invasion and whether they violated Ukraine's territorial integrity.

The China-Russia friendship: Beijing is navigating a complex position as it attempts to balance deepening ties with Moscow with its practiced foreign policy of staunchly defending state sovereignty.

Though not military allies, China and Russia have been presenting an increasingly united front in the face of what they view as Western interference into their respective affairs and regions.

"Putin has committed an assault on the very principles that uphold the global peace. Now the entire world sees clearly what Putin and his Kremlin allies are really all about," Biden said during a live speech from the White House. "This was never about a genuine security concern on their part. It was always about naked aggression."

Biden went on to note the aggressive tacts the Russian president has taken to expand his territory.

This invasion is "about Putin's desire for empire by any means necessary. By bullying Russia's neighbors through coercion and corruption. By changing borders by force, and ultimately by choosing a war without a cause," Biden said. "Putin's action betrays sinister vision for the future of our world, one where nations to take what they want by force."

President Biden spoke on the ways in which Putin's goals and agenda stand in direct contrast to the values of the US and others.

"It's a vision that the United States and freedom-loving nations everywhere will oppose with every tool of our considerable power. The United States and our allies and partners will emerge from this stronger, more united, more determined and more purposeful," said Biden.

President Biden also predicted that the current strategy by Putin will do his nation long-term harm.

"Putin's aggression against Ukraine will end up costing Russia dearly, economically and strategically. We will make sure of that. Putin will be a pariah on the international stage," Biden said.

"When the history of this area is written, Putin's choice to make a totally unjustifiable war on Ukraine will have left Russia weaker and the rest of the world stronger. Liberty, democracy, human dignity: these are the forces far more powerful than fear and oppression. They cannot be extinguished by tyrants like Putin and his armies. They cannot be erased from people's hearts and hopes by any amount of violence and intimidation. They endure," Biden added.

UN Secretary-General Antonio Guterres told reporters the “decisions of the next few days will shape our world” after Russian invaded Ukraine.

Guterres reiterated his comments that the attack is wrong and a repudiation of the principles of the UN charter. He added that though the decision is not irreversible, Russia has given no sign of pulling back.

Russian military operations are being seen “on a scale that Europe has not seen in decades,” he added.

There are “images of fear anguish and terror in every corner of Ukraine” he said, adding that the “protection of civilians must be priority number one.”

US President Joe Biden said direct sanctions on Russian President Vladimir Putin are still "on the table" while taking questions from reporters at the White House.

"It's not a bluff. It's on the table," he said, responding to CNN's Kaitlan Collins.

He did not answer when she asked why he was not personally sanctioning Putin today.

Biden also said he has no plans to talk to Putin after outlining the steps the US is taking to retaliate against the Russian attack on Ukraine.

Biden said removing Russia from SWIFT is not the direction the rest of Europe wants to go in at this moment.

Biden said removing the nation from SWIFT, a high security network that connects thousands of financial institutions around the world, is “always an option,” but said, “right now, that’s not the position that the rest of Europe wishes to take.”

“The sanctions that we’ve proposed on all their banks are of equal consequence, maybe more consequence than SWIFT,” Biden said.

Removing Russia from SWIFT would make it nearly impossible for financial institutions to send money in or out of the country. It would deliver a shock to Russian companies and their foreign customers — especially buyers of oil and gas exports denominated in US dollars.

The Foreign Minister of Ukraine Dmytro Kuleba on Thursday urged the West to ban Russia from SWIFT in a tweet. Earlier on Thursday, CNN reported that the EU was undecided as to whether to cut Russia off from SWIFT and that EU nations were split over the decision.

The US Secretary of Defense has ordered the deployment of 7,000 US service members to Europe, a senior defense official told reporters shortly after US President Joe Biden’s announcement.

Biden said he’d authorized “the deployment of ground and air forces already stationed in Europe,” to Estonia, Latvia, Lithuania, Poland and Romania. He also said he’d authorized “additional US force capabilities” be sent to Germany as part of NATO’s response, including some forces that had been placed on standby several weeks ago.

“This would comprise an armored brigade combat team with associated capabilities and enablers. They will deploy to Germany to reassure NATO Allies, deter Russian aggression and be prepared to support a range of requirements in the region. We expect them to depart in the coming days,” the official said.

In White House remarks, Biden reiterated that US forces "are not and will not be engaged in a conflict with Russia in Ukraine."

“Our forces are not going to Europe to fight in Ukraine, but to defend our NATO allies and reassure those allies in the East," he added.

US President Joe Biden said Thursday that he authorized the deployment of air and ground forces in Europe to the eastern flank of allies and reaffirmed the United States' commitment to defend NATO.

"We're also taking steps to defend our NATO allies. Particularly in the east," the President said during remarks from the White House following the Russian invasion of Ukraine.

Biden continued, "Tomorrow, NATO will convene a summit. We'll be there to bring together the leaders of 30 allied nations and close partners to affirm our solidarity and to map out the next steps we will take to further strengthen all aspects of our NATO alliance."

The President also made clear that US troops will not be going to Europe to "fight in Ukraine" but to defend the NATO alliance.

"Although we provided over $650 million in defensive assistance to Ukraine... last year, let me say it again. Our forces are not and will not be engaged in the conflict with Russia in Ukraine, our forces are not going to Europe to fight in Ukraine but defend our NATO allies and reassure those allies in the east. As I made crystal clear, the United States will defend every inch of NATO territory with the full force of American power," he said.

The President added that he has "no doubt" that NATO members will "meet our Article 5 commitments, which says an attack on one is an attack on all."

Biden then said that he authorized "deployment of ground and air forces stationed in Europe to the eastern flank" and also is authorizing "additional US force capabilities to deploy to Germany as part of NATO's response."

US President Joe Biden said Russian President Vladimir Putin is disconnected from the rest of the world and wants to revive the former Soviet Union.

"He has much larger ambitions than Ukraine. He wants to, in fact, reestablish the former Soviet Union. That's what this is about. And I think that his ambitions are completely are contrary to the place where the rest of the world has arrived."

Biden remained steadfast that sanctions will have an effect on Russian aggression after the country attacked Ukraine.

"It will weaken his country. He'll have to make a very, very difficult choice of whether to continue to move toward being a second-rate power or, in fact, respond," Biden said.

"If we don't move against him now with these significant sanctions, he will be emboldened," Biden later said.

President Biden said he has "no plans to talk" with Russian President Vladimir Putin after he announced a military strike on Ukraine.

Earlier in his address, Biden said, "Putin's aggression against Ukraine will end up costing Russia dearly economically and strategically."

"Putin will be a pariah on the international stage," he added. "Putin's choice to make a totally unjustifiable war on Ukraine will have left Russia weaker and the rest of the world stronger."