Our live coverage of the Ukraine-Russia crisis has moved here.

Scholz announced a halt to the certification of the pipeline from Russia while speaking alongside Irish Prime Minister Micheal Martin in Berlin on Tuesday.

The pipeline, which would have increased European reliance on energy from Russia, has been a major source of contention in Europe and the United States for years.

“With regard to the latest developments, we need to reassess the situation also with regard to Nord Stream 2. It sounds very technocratic but it is the necessary administrative step in order to stop certification of the pipeline," Scholz said.

Without undergoing the certification or approval process, the pipeline cannot start running.

For almost eight years, the breakaway regions have been the site of a low-intensity war between Russian-backed separatists and Ukrainian forces, which has left more than 14,000 people dead.

But Putin's decision to send forces into the area has raised fears about a broader war in Ukraine. Here's a look at how the conflict started. 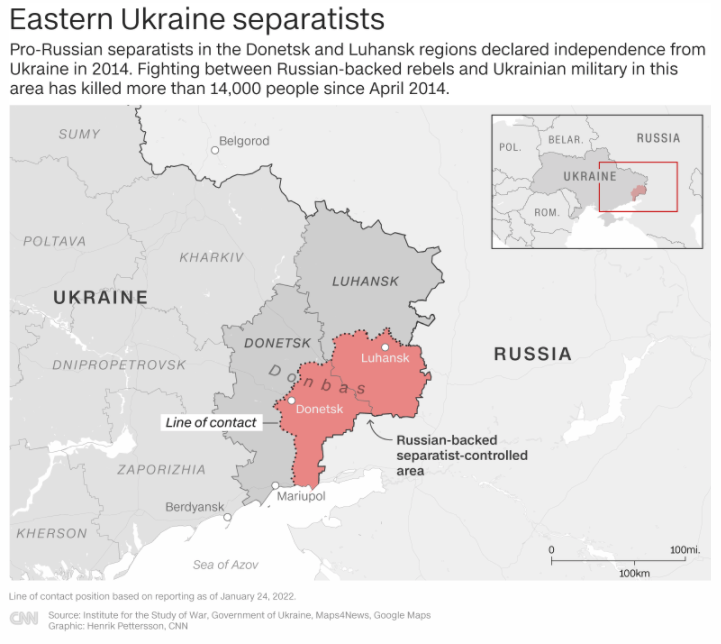 What's the recent history in Donbas?

War broke out in 2014 after Russian-backed rebels seized government buildings in towns and cities across eastern Ukraine. Intense fighting left portions of the Donbas region's eastern Luhansk and Donetsk oblasts in the hands of Russian-backed separatists. Russia also annexed Crimea from Ukraine in 2014 in a move that sparked global condemnation.

The Minsk II agreement of 2015 led to a shaky ceasefire agreement, and the conflict settled into static warfare along the Line of Contact that separates the Ukrainian government and separatist-controlled areas. The Minsk Agreements (named after the capital of Belarus where they were concluded) ban heavy weapons near the Line of Contact.

How has Russia stoked the conflict?

The separatists in Donbas have had substantial backing from Moscow. Russia has long maintained that it has no soldiers on the ground there, but US, NATO and Ukrainian officials say the Russian government supplies the separatists, provides them with advisory support and intelligence, and embeds its own officers in their ranks.

Moscow has also distributed hundreds of thousands of Russian passports to people in Donbas in recent years.

Western officials and observers have accused Russian President Vladimir Putin of attempting to establish facts on the ground by naturalizing Ukrainians as Russian citizens, a de facto way of recognizing the breakaway states. It also gives him a reason to intervene in Ukraine. 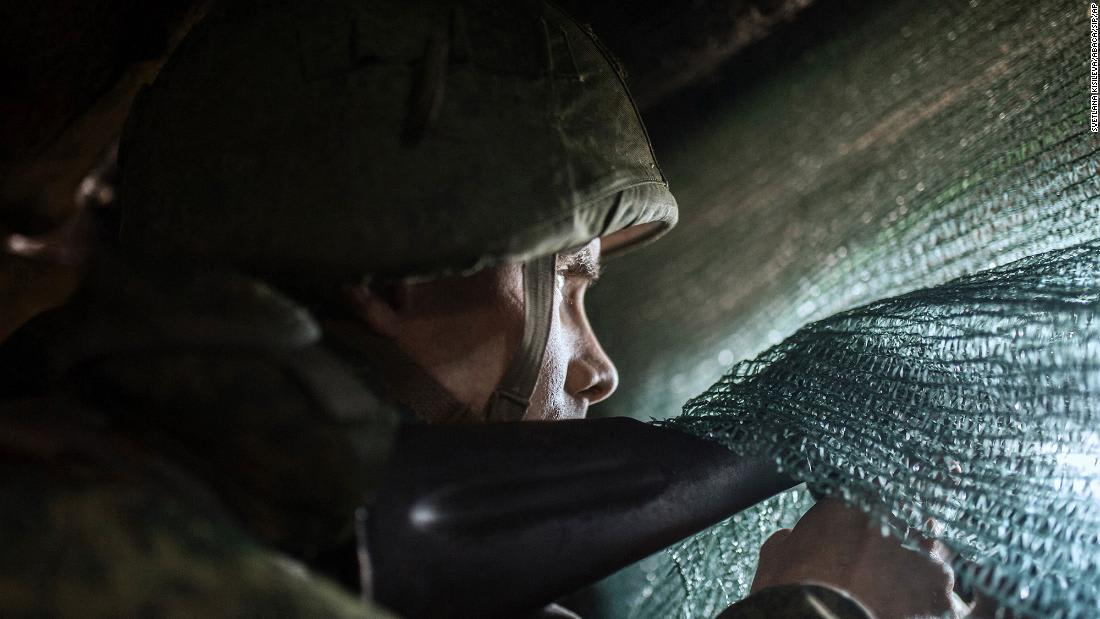 Taiwan's presidential spokeswoman said it was "encouraging" that UN ambassadors were rejecting Russia's claims to Ukraine territory, saying she looked forward to the day "the world will equally reject" China's claims over Taiwan.

On Tuesday, China's Foreign Ministry rebuffed parallels between Ukraine and Taiwan, calling it an “irrefutable historical and legal fact” that there is "only one China in the world and Taiwan is an inalienable part of the Chinese territory,” referring back to its "One-China" principle.

Ukrainian President Volodymyr Zelensky said Tuesday he believes “there will be no war” with Russia, but cautioned that Ukraine will be prepared should Russian military aggression against his country escalate further.

“With regards to being on a military footing, we understand there will be no war,” Zelensky said.

The Ukrainian president described Russia’s actions as a form of “legal aggression” to create a “strong foundation” for possible further military escalation in the Russian-backed eastern breakaway regions.

Speaking during a press conference in Kyiv, Zelensky said Russia’s actions amount to an “attack on the sovereignty and territorial integrity” of Ukraine, but called for further dialogue between the two states.

“We urge Russia, not for the first time, to resolve these issues through dialogue, to sit down at the negotiating table,” the Ukrainian president said. “We are ready to negotiate in any forum, and Russia knows this.”

Despite calls for diplomatic efforts to continue, Zelensky noted that he has received a request from the Ukrainian Foreign Ministry to consider breaking diplomatic relations with Russia.

“I will be considering this, and not only this, but also the effective actions we can take with regards to the escalation by Russia,” he said.

China's Foreign Ministry evaded more than a dozen questions on Ukraine in its daily briefing on Tuesday, sticking closely in its responses to a statement released after Foreign Minister Wang Yi's phone call with US Secretary of State Antony Blinken.

The 14 questions regarding Ukraine that were asked in the briefing included whether China recognized the independence of the two separatist pro-Moscow regions in eastern Ukraine and whether China would use its influence to prevent a "further incursion" into Ukraine's territory.

In his responses, Foreign Ministry spokesperson Wang Wenbin reiterated that any country’s “legitimate security concerns should be respected” and urged all parties to "exercise restraint.”

He re-emphasized that China would contact all parties "based on the merits of the matter" and that the different sides should resolve their differences through dialogue and negotiation.

Chinese Foreign Minister Wang Yi had earlier expressed "concern" about the situation in Ukraine and said “legitimate security concerns of any country should be respected" during a phone call Blinken, according to a statement from China's Ministry of Foreign Affairs.

But Wang Wenbin offered few words beyond that statement during the Tuesday briefing, in keeping with its reluctance to join Western condemnation of Russia in recent days. He was asked how China views potential sanctions against Russia and whether it would help Russia, to which he repeated that countries should exercise restraint and resolve differences through negotiation to “prevent further escalate the situation.”

Wang was also asked whether China sees parallels between Ukraine and Taiwan, to which he responded it is an “irrefutable historical and legal fact” that there is "only one China in the world and Taiwan is an inalienable part of the Chinese territory,” referring back to its "One-China" principle.

The China-Russia relationship: Beijing is navigating a complex position as it attempts to balance deepening ties with Moscow with its practiced foreign policy of staunchly defending state sovereignty.

Though not military allies, China and Russia have been presenting an increasingly united front in the face of what they view as Western interference into their respective affairs and regions.

Since Russian President Vladimir Putin’s extraordinary address on Monday evening, talk in Europe has turned to whether or not the European Union will maintain its hardline position on not-yet-public sanctions.

The EU’s position matters because, until now, the West’s position in this crisis has been heavily coordinated.

NATO has led the military and political organization whereas the EU, the world’s largest economic union, has proposed a package of sanctions that would do serious damage to the Russian economy, Putin’s associates and undermine Moscow’s grip on the Russian sphere of influence.

One NATO official told CNN last week that without the EU’s sanctions proposals “the Western response would unquestionably have been much weaker.”

But fears emerged on Monday night that the EU would put forward a less severe package in order to keep diplomatic options open and deescalate.

Putin’s decision to send troops into two separatist pro-Moscow regions in eastern Ukraine, and recognize them as independent, has put the West in a very difficult position as it determines whether or not what happened on Monday counts as a full invasion or not.

According to a senior EU diplomat, thinking as of Tuesday morning is that the West needs to take severe action against Putin for his most recent actions, but keep the option open to go further should Putin escalate again.

“They’re looking at a package of sanctions that is still under the remit of the 2014 sanctions package,’ after Russia annexed Crimea, the diplomat explained.

They said that all of this was being done in full coordination with the US and UK, but that “keeping a lot of sticks in our back pocket makes sense.”

The diplomat added that the “package presented today needs to be heavy enough to really hurt but to keep the package with massive consequences and costs available in the case of escalation.”

However, they admitted that we are not likely to see the new, maximum damage sanctions package in response to Putin’s most recent aggression.

The UK is also expected to put forward a sanctions package today and has publicly taken a very firm line against Putin.

Obviously, things are fluid and subject to change, not least because no one knows what Putin’s next move will be. However, the Russian president’s surprise move on Monday has put the Western alliance in a difficult position of not knowing how far to go in response.

In a statement addressed directly to members of Ukraine’s armed forces, Reznikov said “the Kremlin has taken another step towards the revival of the Soviet Union.”

“The darkness of uncertainty has fallen. What you have known for eight years, the whole world has now seen,” he said in the statement posted on the ministry’s website.

Reznikov accused the Russian president of “waging a vile war all these years, hiding behind women and children.”

“The crime will certainly be punished. Thanks to you, Europe has realized the real cost of avoiding honest answers,” he said.

Putin delivered a lengthy televised address on Monday evening, announcing his decision to recognize the independence of separatist-held parts of eastern Ukraine and ordering Russian forces to be sent in.

Ukraine's Foreign Ministry said on Monday that by recognizing the "quasi-entities it had created" in Donetsk and Luhansk, Russia "has blatantly defied the fundamental norms and principles of international law."

The ministry said Russia had "violated the sovereignty and territorial integrity of Ukraine within its internationally recognized borders," and urged the international community to apply sanctions.

The ministry condemned the move in their Tuesday statement, saying it "sharply escalates the situation and can mean the Russian Federation’s unilateral withdrawal from the Minsk agreements," the 2015 pact that established a shaky ceasefire in the region and banned heavy weapons near the Line of Contact.

"The Ukrainian side understands Russia’s intentions and its objective to provoke Ukraine," the ministry said.

"The Russian Federation’s next decisions and moves depend greatly on global reactions to today’s developments. We therefore insist on application against Russia of harsh sanctions to send a clear signal of inadmissibility of further escalation," the ministry said. "The time has come to act in order to stop Russian aggression and restore peace and stability in Europe."

“Obviously we are going to initiate sanctions,” Le Drian said ahead of a meeting of European foreign ministers in Paris.

“It’s a violation of international law, it’s an attack on the sovereignty and integrity of Ukraine, it’s Russia renouncing its international commitments and the Minsk accords that it had signed," Le Drian said. "So the situation is very serious.”

He added that European leaders had three messages to convey — taking a firm stance against Russia's actions, showing solidarity with Ukraine, and showing unity in Europe.

European markets have fallen sharply in the opening minutes of trade as the crisis in Ukraine intensifies. The German Dax and the French Cac 40 were both trading around 2% lower in early trade, while the UK FTSE 100 was around 1% down.