The latest on Ukraine and Russia tensions

Our coverage has ended for the day. Read the latest here.

Russia has amassed more than 100,000 troops near Ukraine's border in recent weeks, according to US estimates, raising fears from Western and Ukrainian intelligence officials that an invasion could be imminent.

As frantic diplomatic efforts are made to avert war, analysts are warning that Russia's military poses an immediate threat to Ukraine.

But if an invasion were to occur, it is not clear where it would begin. Russia has created pressure points on three sides of Ukraine — in Crimea to the south, on the Russian side of the two countries' border and in Belarus to the north.

Here are the three fronts Ukraine and the West are watching, and the recent Russian movements detected in each. 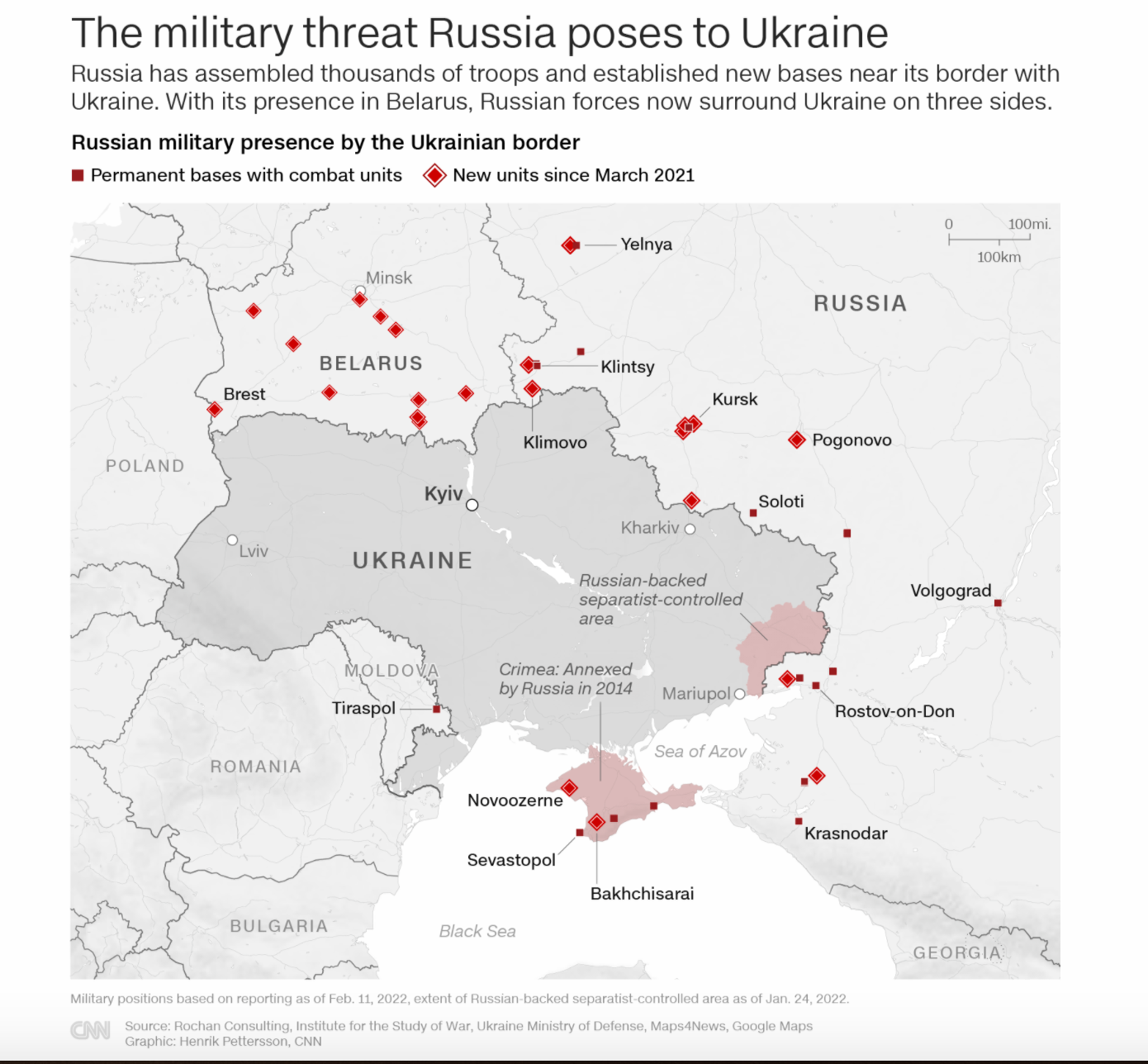 Canadian Prime Minister Justin Trudeau spoke to Ukrainian President Volodymyr Zelensky about the security concerns in eastern Europe, according to a statement. Canada also announced a temporary move of its embassy in Ukraine from Kyiv to Lviv, according to a news release.

Trudeau shared his concerns on Saturday with Zelensky "about the continuing buildup of Russian military forces in and around Ukraine, as well as Russia’s ongoing aggression and destabilization activities,” according to a statement.

Trudeau told Zelensky that "any further military incursion" into Ukraine would have consequences for Russia, such as sanctions.

Meanwhile, Canada's Foreign Affairs Minister Mélanie Joly announced that the country is moving its embassy in Ukraine from Kyiv to Lviv due to "the continued deterioration of the security situation caused by the build up of Russian troops on Ukraine’s border," a news release said.

“We will resume operations at the embassy in Kyiv as soon as the security situation in Ukraine allows us to ensure the adequate delivery of services and guarantee the security of our staff," Joly added.

Israel has informed its citizens to leave Ukraine as fears mount of a possible Russian invasion.

The announcement comes one day after Israel's Foreign Ministry announced it was withdrawing the families of its diplomats serving in Ukraine because it assessed the Russian army had assembled sufficient forces along the border to invade.

An estimated 10,000-15,000 Israelis are living in Ukraine, most either connected to the tech sector or studying at universities.

The ministry said its embassy in Kyiv would continue to operate at full strength, with extra staff coming in to support the expected increase in demand for consular services.

Israeli ministers have also been discussing the possibility of helping Ukraine’s wider Jewish community, which is estimated at between 150,000-200,000 in size.

Nachman Shai, the minister responsible for diaspora affairs, urged government colleagues to be ready to act.

“If Ukraine’s Jewish community is put in danger by the Russian conflict, we must offer immediate immigration, as well as support the communities on the ground,” he tweeted.

Ukrainian President Volodymyr Zelensky said his government understands the risks from Russia and is working with international partners to resolve the conflict through diplomacy.

The Ukrainian government "is aware of the risks of escalation of the situation on the part of the Russian Federation, is preparing for any developments and is in constant consultation with international partners in order to resolve the conflict through political and diplomatic means," he said while speaking to media in the southern region of Kherson near Crimea, where he had attended military drills.

Zelensky said his government "understand all the risks, as they receive information from various sources, including their own intelligence and intelligence agencies of partner countries."

"There can be surprises any time," he continued. "We must rely on our own forces. We understand that such things can take place without warning. Therefore, the most important thing is that we are ready for everything."

He added that negotiations are underway at the international level to prevent escalation.

Slovakia and Slovenia on Saturday advised their citizens not to travel to Ukraine.

The Slovak Ministry of Foreign Affairs told citizens not to travel to Ukraine "under any circumstance," the ministry said Saturday on its website.

The Slovak ministry recommends to those currently in Ukraine to find an accommodation not located within or proximal to the self-governed regions — including parts of Luhansk Oblast and Donetsk Oblast, Crimea and Sevastopol — it said.

The Slovenian government also advised its citizens against traveling to Ukraine.

"We advise those Slovenian citizens who are temporarily in Ukraine to ensure a safe return," the foreign ministry said Saturday on its website.

"All trips to the temporarily occupied territories of the Autonomous Republic of Crimea and Sevastopol, as well as certain areas of the Donetsk region and the Luhansk region, are also discouraged," it said.

The Slovenian Embassy in Kyiv "cannot provide consular assistance to Slovenian citizens who would find themselves in trouble in these regions," it added.

Ushakov said the conversation, which ran just over an hour, "took place in an atmosphere of hysteria about the supposedly imminent Russian invasion of Ukraine by American officials, everyone knows this."

Ushakov added: "The pressure around the topic of the invasion was carried out in a coordinated manner and the hysteria has reached its climax."

According to Ushakov, Biden told Putin he was "committed to the diplomatic path and had laid out a range of considerations that he sees as addressing many of Russia's concerns."

But, Ushakov added, Putin said the West had ignored main Russia's security concerns, saying the US and its allies had been "pumping up" Ukraine with new weaponry and encouraging provocations by Ukrainian forces in the Donbas region and in Crimea.

"The Russian side, of course, will carefully analyze the considerations expressed by Biden and will undoubtedly take them into account, but unfortunately these considerations do not affect the central, key elements of Russian initiatives about NATO expansion, about not deploying strike forces on Ukrainian territory, about the return of the [NATO] alliance to the state of 1997," Ushakov said.

France has advised its citizens "against all travel" to Ukraine, the country's foreign ministry said Saturday in a statement, joining a growing list of other nations that have updated their travel advice.

"In the context of the tensions created by the concentration of Russian troops on the borders of Ukraine, it is recommended to be extra vigilant," the ministry said on its website. "Travel to the northern and eastern border areas of the country is strongly discouraged."

"It is advised to postpone all travels to Ukraine," the ministry said, adding that these recommendations will continue to be updated according to the information available.

French President Emmanuel Macron also spoke with Russian President Vladimir Putin on Saturday for more than an hour and a half.

"At a time when the whole world is hysterically expecting something to happen between Russia and Ukraine, you cannot pretend that nothing is happening," the Serbian president said.

Vučić also added that fuel supplies have not been secured yet.

Sweden on Saturday urged its citizens to leave Ukraine and advised against "all travel" to the country, joining a host of other countries updating their travel advice.

"Due to the serious and unpredictable security situation in Ukraine and its immediate area, the Ministry of Foreign Affairs has today decided to advise against all travel to Ukraine and urges all Swedes who are in Ukraine to leave the country," Foreign Minister Ann Linde said in a tweet.

On Friday, Denmark advised Danish nationals to leave Ukraine, in light of the "serious security situation" in and around the country, the Ministry of Foreign Affairs said in a statement.

The ministry "is now raising the level of security in the travel guidance for Ukraine to red. Therefore, all travel to Ukraine is advised against, and all Danes in Ukraine are advised to leave the country," it said.

The Danish embassy in Kyiv remains open and operational for now.

"It is still possible to leave Ukraine by regular air routes and by road and rail. It is not possible to say whether or when those opportunities may be curtailed, and Danes in Ukraine are therefore encouraged to leave the country," the ministry said, adding that Danish authorities cannot guarantee assistance to Danes who choose to stay in Ukraine at a later date.