For the second time this week, President Vladimir Putin has floated the possibility that Russia may formally change its current doctrine that it will not be the first to use nuclear weapons in a conflict.

Putin noted that United States’ policy was not to exclude the possibility of a “disarming” nuclear strike.

“They have it in their strategy, in the documents it is spelled out – a preventive blow. We don't. We, on the other hand, have formulated a retaliatory strike in our strategy," Putin said.

Even if Russia were to retaliate immediately on seeing the launch of nuclear missiles towards it, Putin said, “This means that the fall of the warheads of enemy missiles on the territory of the Russian Federation is inevitable – they will still fall.”

“So if we're talking about this disarming strike, then maybe think about adopting the best practices of our American partners and their ideas for ensuring their security. We're just thinking about it. No one was shy when they talked about it out loud in previous times and years," he added. “If a potential adversary believes it is possible to use the theory of a preventive strike, and we do not, then this still makes us think about those threats that are posed to us.”

Putin was speaking at a news conference in Bishkek. He described the preemptive nuclear strike as “applied to the control points, deprive the enemy of these control systems and so on,” implying that it could even prevent a retaliatory strike.

Some background: On Wednesday, Putin acknowledged that the conflict is “going to take a while,” as he also warned of the “increasing” threat of nuclear war.

“As for the idea that Russia wouldn't use such weapons first under any circumstances, then it means we wouldn't be able to be the second to use them either — because the possibility to do so in case of an attack on our territory would be very limited," he said Wednesday.

Putin’s comments come as the war enters winter, with Russia continuing to shell eastern and southern parts of Ukraine – and facing attacks on its own soil.

Biden administration officials have previously said that Moscow has been warned at the highest levels of the consequences for use of nuclear weapon in the war.

The Pentagon announced that an additional $275 million in security assistance for Ukraine has been approved.

“This authorization is the Biden Administration’s twenty-seventh drawdown of equipment from DoD inventories for Ukraine since August 2021,” according to a statement from the Defense Department.

The package includes weapons and artillery rounds, as well as equipment to help Ukraine boost its air defense, according to the statement.

Ukrainian President Volodymyr Zelensky thanked the United States for its "unwavering support" in this country's "fight against Russian aggression" in a tweet Friday.

"No missile terror will stop our fight for freedom! It is important that the people of the United States are side by side with the people of Ukraine in this struggle," Zelensky said.

The Defense Department said the US have provided more than $19 billion in aide to Ukraine since the beginning of the war in February.

The Ukrainian Security Service (SBU) says it has identified a Russian commander who ordered troops to fire at civilians in the early days of the invasion.

The SBU alleges that Lieutenant Colonel Yevgeniy Zelenov — a deputy commander in the Western Military District — ordered troops to shoot at civilian cars at the entrance to Kharkiv on Feb. 24, the first full day of the invasion.

The SBU claims in a statement that on that day, Zelenov was commanding a Russian battalion-tactical group and "conducted active hostilities with the units of the Defense Forces in the eastern direction."

"According to the investigation, his occupation group approached the Kharkiv ring road from the side of the village of Lyptsi and blocked the entrance to the regional center," the SBU continues.

"At the same time, local residents who were traveling from the border settlements of the region demanded the traffic be unblocked and resisted the occupiers."

The SBU claims that Zelenov ordered his subordinates to open fire on the cars with civilians.

"As a result of the crime, one person was killed, at least two were seriously injured," the security service alleges.

CNN is reaching out to the Russian Defense Ministry for comment on the accusations. Russia has consistently denied targeting civilians in what it calls its "special military operation" in Ukraine.

The CNN Film “Navalny” follows Russian opposition leader Alexey Navalny, who was poisoned in August 2020 with a nerve agent during a flight to Moscow.

The film paints an intimate portrait of one of Russian President Vladimir Putin’s fiercest critics and takes viewers inside the harrowing search for answers following his poisoning.

When and where to watch:

Navalny is a Russian opposition leader, Kremlin critic and activist. He has been a prominent organizer of street protests and has exposed corruption in the Russian government on social media.

Earlier this year, Navalny was sentenced to nine years in prison on fraud charges he said were politically motivated.

Where is Navalny now?

Navalny has been transferred into a solitary prison cell, according to tweets from himself and his staff, in what he described as a move designed to “shut me up.”

In his isolation, Navalny said he is allowed just two books, and his parents, children and wife can no longer see him.

President Joe Biden signed the official commutation for Viktor Bout last Friday, Dec. 2, according to the document that was posted on the Justice Department website.

The conditions of Bout's commutation include that he not return to the United States and not profit from any book or movie about his arrest or release.

On Thursday, the White House said Bout's commutation was not finalized until US officials saw Brittney Griner on the tarmac in Abu Dhabi.

Here's a look at the full document: 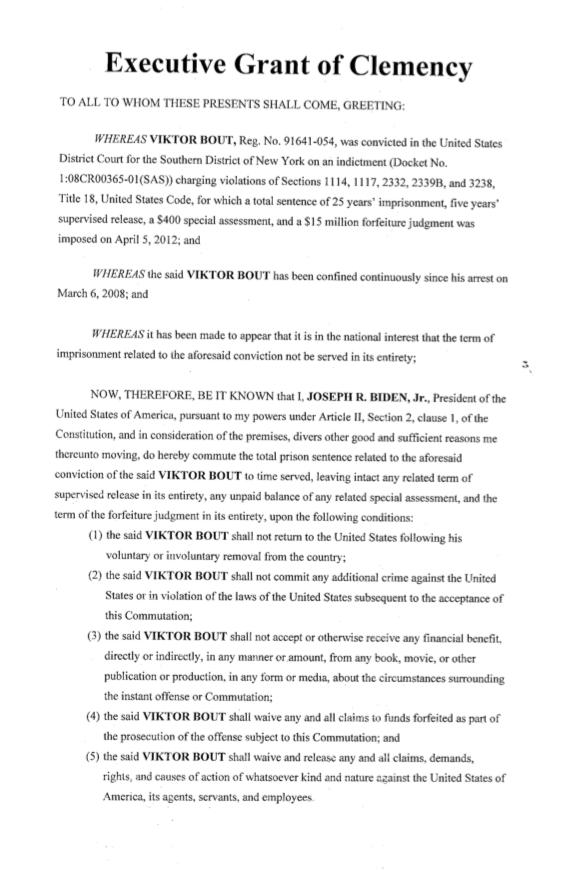 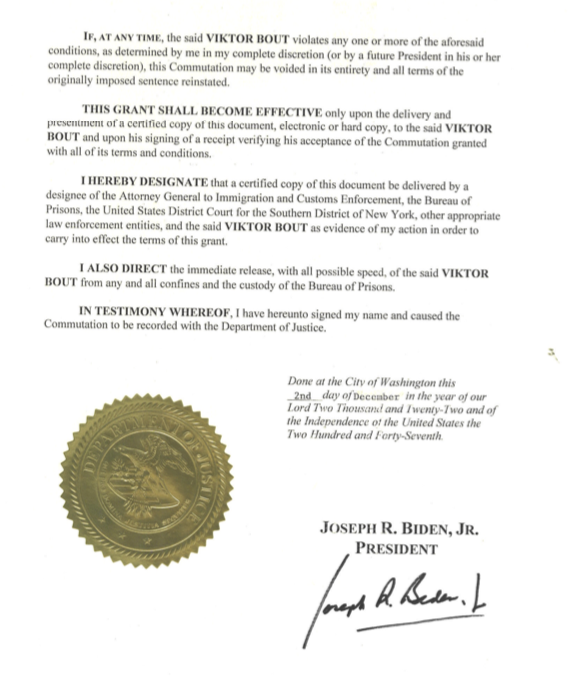 “The US government is focused on ensuring that Brittney Griner and her family’s well-being are prioritized and that all assistance available be offered in an appropriate manner,” the official said.

“Due to privacy reasons and out of respect to the family, we do not have anything additional to provide,” they said.

Griner was released from a Russian jail in a Thursday prisoner swap for convicted arms dealer Viktor Bout.

The Pentagon said Thursday there is some “concern” that Viktor Bout, who returned to Russia yesterday in a prisoner exchange for Brittney Griner, could return to the illicit international arms trade.

“I think there is a concern that he would return to doing the same kind of work that he's done in the past,” a senior defense official told reporters after Bout’s release from US custody.

Bout is allegedly the most prolific arms dealer of the past decades, fueling conflicts in Africa and beyond. He was serving a 25-year prison sentence in the US on charges of conspiring to kill Americans, acquire and export anti-aircraft missiles, and provide material support to a terrorist organization.

The official said the Defense Department will continue to work with its partners in Africa to understand the current risk factors in the international arms trade.

Around 50% of Ukraine's critical infrastructure for electricity have been “damaged more” and some has been “totally destroyed,” Oleksandr Kubrakov, the country's infrastructure minister, has told CNN.

Ukraine was using “big bags of sand” to protect the targets, he added.

In a daily update to the energy situation across the country, the state energy supplier Ukrenergo maintained that the situation “remains difficult but under control”.

However, the company did admit that “all thermal and hydroelectric power plants are partially damaged,” and that the occupied Zaporizhzhia Nuclear Power Plant is not supplying electricity to the grid.

The company noted that that there will be little “major improvement” on the restoration of power across the country over the weekend. Russian shelling and missile strikes have continued to impact Ukraine's energy infrastructure.

Russian opposition figure Ilya Yashin said on Friday that the "authors" of the "hysterical verdict" of a Moscow court handing him eight and a half years of jail time are "optimistic about Putin's prospects," according to a post on Yashin’s official Telegram account.

"The authors of the verdict are optimistic about Putin's prospects. In my opinion, they are too optimistic," he said.

"With this hysterical verdict, the government wants to intimidate us all, but in fact, it only shows its weakness.

"Strong leaders are calm and self-confident, and only weaklings seek to shut everyone up, burn out any dissent. So today it only remains for me to repeat what was said on the day of my arrest: I am not afraid, and you should not be," the post added.

The reaction came after a Moscow court announced the sentencing after finding Yashin guilty of spreading "false information" about the Russian army, according to Russian state media RIA Novosti.

"But we also have no reason to be sad, because we have won this trial, friends," Yashin continued. "We spoke the truth about war crimes and called for an end to the bloodshed."

Russian investigators said his statements about the circumstances of the killings in Bucha are a criminal offense under recently introduced legislation, which considers discrediting the Russian armed forces to be illegal.

Some background: Yashin, also a close ally of Russian opposition leader Alexey Navalny, came to prominence during the protests between 2011 and 2012, which he helped organize against Putin's re-election for the third term and unfair elections. Yashin remained a fierce Putin critic for years to come, also serving as a municipal deputy in small Moscow municipality before being barred from running for a public office.