A "Russian-made missile" on the Polish village of Przewodów, which is near the border with Ukraine, Poland's foreign ministry said late Tuesday.

"At 15:40 (local time) in the village of Przewodów in the Hrubieszów poviat in the Lubelskie Voivodship, a Russian-made missile fell, killing two citizens of the Republic of Poland," Lukasz Jasina, Ministry of Foreign Affairs spokesperson said in a statement.

The ministry's statement did not specify the type of missile or where it was fired from.

"In connection with this event, the Minister of Foreign Affairs, Prof. Zbigniew Rau summoned the ambassador of the Russian Federation to the Ministry of Foreign Affairs and demanded immediate detailed explanations," ministry spokeperson Lukasz Jasina said in a statement.

Some background: Earlier, Polish media reported projectiles struck a farm in the NATO member’s territory roughly around the time Russia launched its biggest wave of missile attacks on Ukrainian cities in more than a month.

Germany on Tuesday completed the construction of its first floating terminal of LNG, a chilled, liquid form of natural gas that can be transported on sea tankers, as part of the country’s plan to reduce its dependency on Russian gas.

The terminal, which was completed at the North Sea port of Wilhelmshaven, Lower Saxony, is expecting the first ship to dock in mid-December, a spokesperson for Lower Saxony's economy minister Olaf Lies told CNN on Tuesday.

“The new LNG jetty is a major step toward a secure energy supply,” Lies said, according to his spokesperson.

A Floating Storage and Regasification Unit (FSRU) is due to moor in Wilhelmshaven before the end of the year and will be able to re-gasify imported LNG arriving on gas tankers, according to a statement from the region's economic ministry.

Some context: Germany was heavily reliant on Russian gas before the war in Ukraine, with 55% of all gas consumed in Germany coming from Russia.

The country is no longer receiving Russian gas through the Nord Stream 1 pipeline after Russia halted supplies, leaving Germany scrambling for alternatives.

Kremlin spokesperson Dmitry Peskov said he has no information on an explosion in Poland.

“Unfortunately I don’t have any information on that," Peskov said in response to a question from CNN.

In the immediate aftermath of the incident, Russia's defense ministry said no strikes were "made on targets near the Ukrainian-Polish state border.”

More background: World leaders are in the process of arranging meetings to discuss a fatal explosion that happened in eastern Poland, near the border of Ukraine. Polish media said projectiles struck a farm in the NATO member’s territory near the border with Ukraine roughly the same time as Russia launched its biggest wave of missile attacks on Ukrainian cities in more than a month.

US Secretary of State Antony Blinken spoke with his Polish counterpart Zbigniew Rau Tuesday in the wake of a reported explosion in Poland, Łukasz Jasina, the spokesperson for the Polish Ministry of Foreign Affairs and US State Department officials confirmed.

What we know so far: Poland convened an emergency meeting of national security officials on Tuesday, after Polish media reported projectiles killed two people near the border with Ukraine on Tuesday.

It remains unclear where the projectiles came from, but they landed in the NATO member’s territory roughly the same time as Russia launched its biggest wave of missile attacks on Ukrainian cities in more than a month.

New videos and photos show a large smoke plume and a crater in the small village of Przewodów, Poland, where Polish officials confirmed that two people were killed after an explosion.

Przewodów is a small village just 4 miles (more than 6 kilometers) from the Ukrainian border. The cause of the explosion has yet to be verified, but it came at around the same time Russian conducted a number of missile strikes in Ukraine.

Video taken by a resident shows a large smoke plume in the center of the village. CNN geolocated and confirmed the authenticity of the video.

Two additional photos show a large crater and an overturned tractor and flatbed trailer. The images are being broadcast on Polish media outlets, and in one of the images, a Polish state firefighter is seen. CNN cannot independently confirm the photos.

Ukrainian President Volodymyr Zelensky said about 10 million Ukrainians are without electricity Tuesday night after waves of Russian missile attacks earlier in the day.

"In many cities and regions of our country, there are again emergency power cuts. About ten million Ukrainians are without electricity. Most of all — as of this moment — in Kharkiv, Zhytomyr, Kyiv and Lviv regions."

Zelensky added that Lviv and some other cities suspended the supply of heating and that there also were issues with the internet and other modes of communication.

Across much of Ukraine, temperatures are marginally above freezing.

"As a result of the strikes, the automation today shut down several nuclear units at two stations — these are calculated consequences, and the enemy knew exactly what he was doing," Zelensky said.

Some background: Russia fired "around 100 missiles" at cities across Ukraine on Tuesday, according to Yurii Ihnat, spokesperson for the Ukrainian Air Force command.

At least a dozen cities and districts were targeted, according to a CNN analysis of the missile strikes. The wave of strikes appears to be the largest since Oct. 10, when Russia stepped up its campaign to destroy electricity, water and gas infrastructure across Ukraine.

Herman Halushchenko, Ukrainian Energy Minister, confirmed that most of the targets Tuesday were energy facilities.

Poland is considering asking its NATO partners for discussions under Article 4 of the NATO Treaty after a missile was reported to have landed on its territory Tuesday, killing two people.

The government has so far only confirmed that there was an explosion.

"It will be verified whether there are grounds to launch the procedures under Article 4 of the North Atlantic Pact," a government spokesperson said.

Article 4 allows for any member to seek consultations with the rest of the alliance and states.

"The Parties will consult together whenever, in the opinion of any of them, the territorial integrity, political independence or security of any of the Parties is threatened.”

Polish officials on Tuesday said that two people died following an explosion in the Hrubieszów district in eastern Poland.

“There was an explosion in eastern Poland,” said government spokesman Piotr Muller said in Warsaw. He said experts were gathering details on what he called a “serious” situation.

Poland is considering asking its NATO partners for discussions under Article 4 of the NATO Treaty.

Article 4 allows for any member to seek consultations with the rest of the Alliance, and states: “The Parties will consult together whenever, in the opinion of any of them, the territorial integrity, political independence or security of any of the Parties is threatened.”

Kyiv's response: Ukrainian President Volodymyr Zelensky said it was Russian missiles that hit Poland. However, Russia's defense ministry said no strikes were made "on targets near the Ukrainian-Polish state border.”

CNN at the scene: CNN’s Matthew Chance is in the small town of Przewodów, close to where a fatal explosion occurred near the Polish-Ukraine border. Chance said police have sealed off the road and journalists are not being permitted to go to the site. A local resident told CNN they heard a terrifying “whoosh” as a projectile flew over the town. Chance spoke to a caretaker of a local school who said the force of the explosion shook classroom windows approximately 200 meters from the school gates. Students were not inside the school when the explosion occurred.

Here's how world leaders are reacting: US President Joe Biden spoke by phone with President Andrzej Duda of Poland from Bali, Indonesia, where he was attending the Group of 20 Summit, the White House said. NATO Secretary General Jens Stoltenberg has said that it is "important that all facts are established," after speaking with Duda about the explosion. Meanwhile, French President Emmanuel Macron and EU Council President Charles Michel proposed a meeting with fellow EU leaders attending the G20 summit. 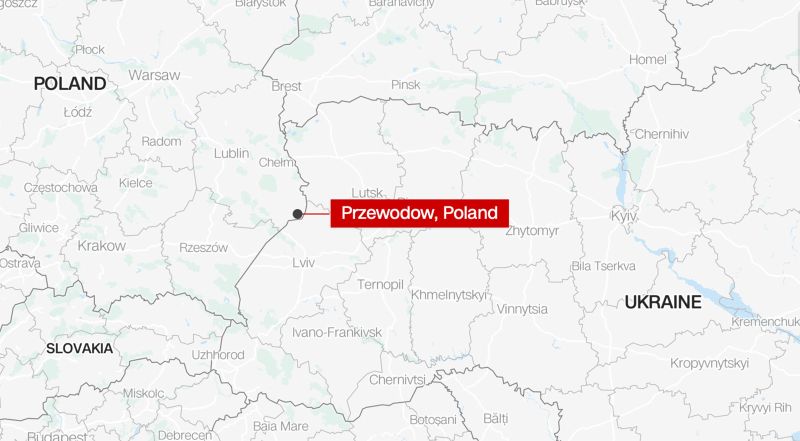