Our live coverage has wrapped up for the day. You can read more on Russia's invasion of Ukraine here, or scroll through the updates below.

This map shows the assessed Russian and Ukrainian areas of control, after Moscow's forces retreated from the western Kherson region. 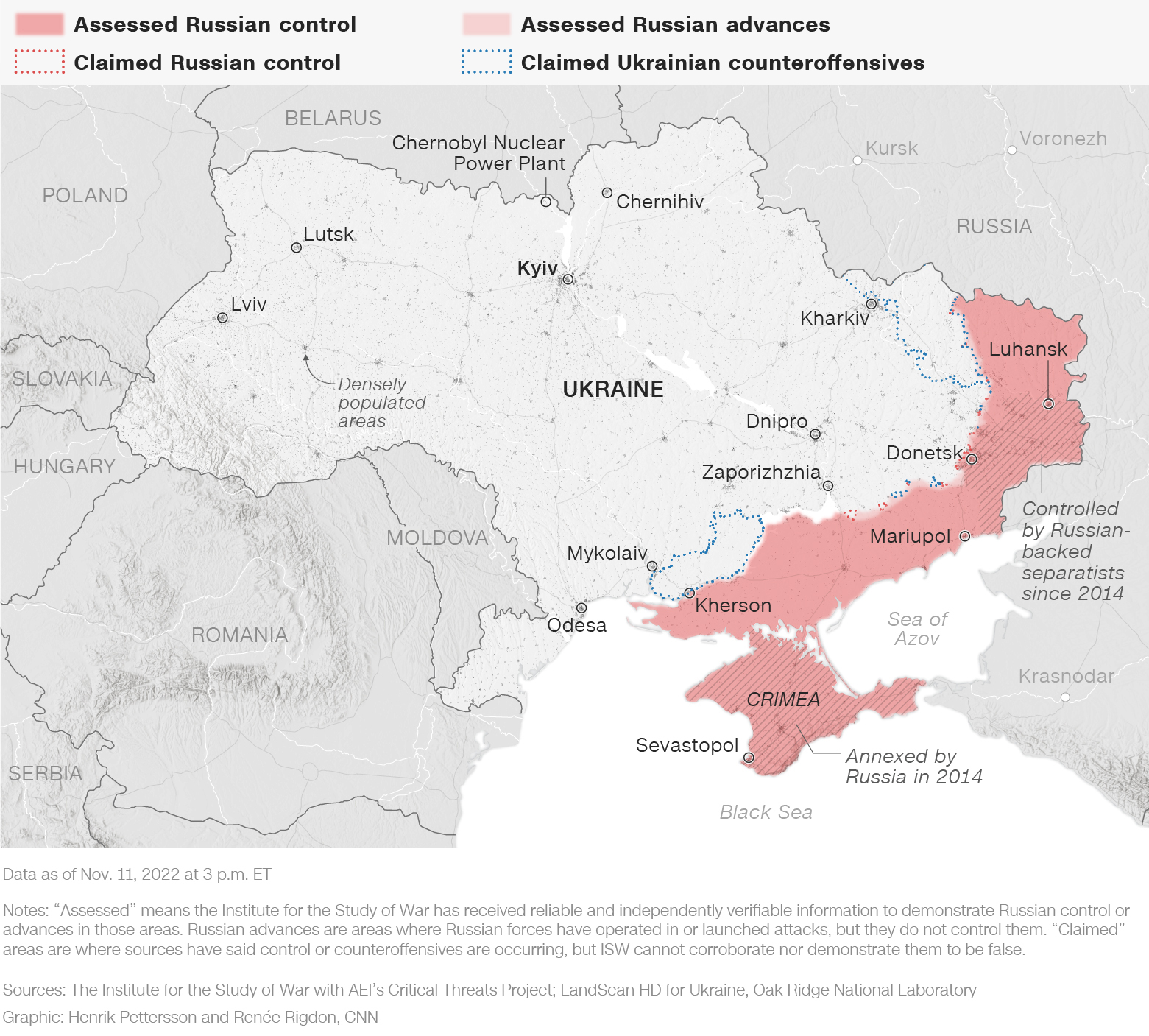 And here's a zoomed-in view of the Kherson region: 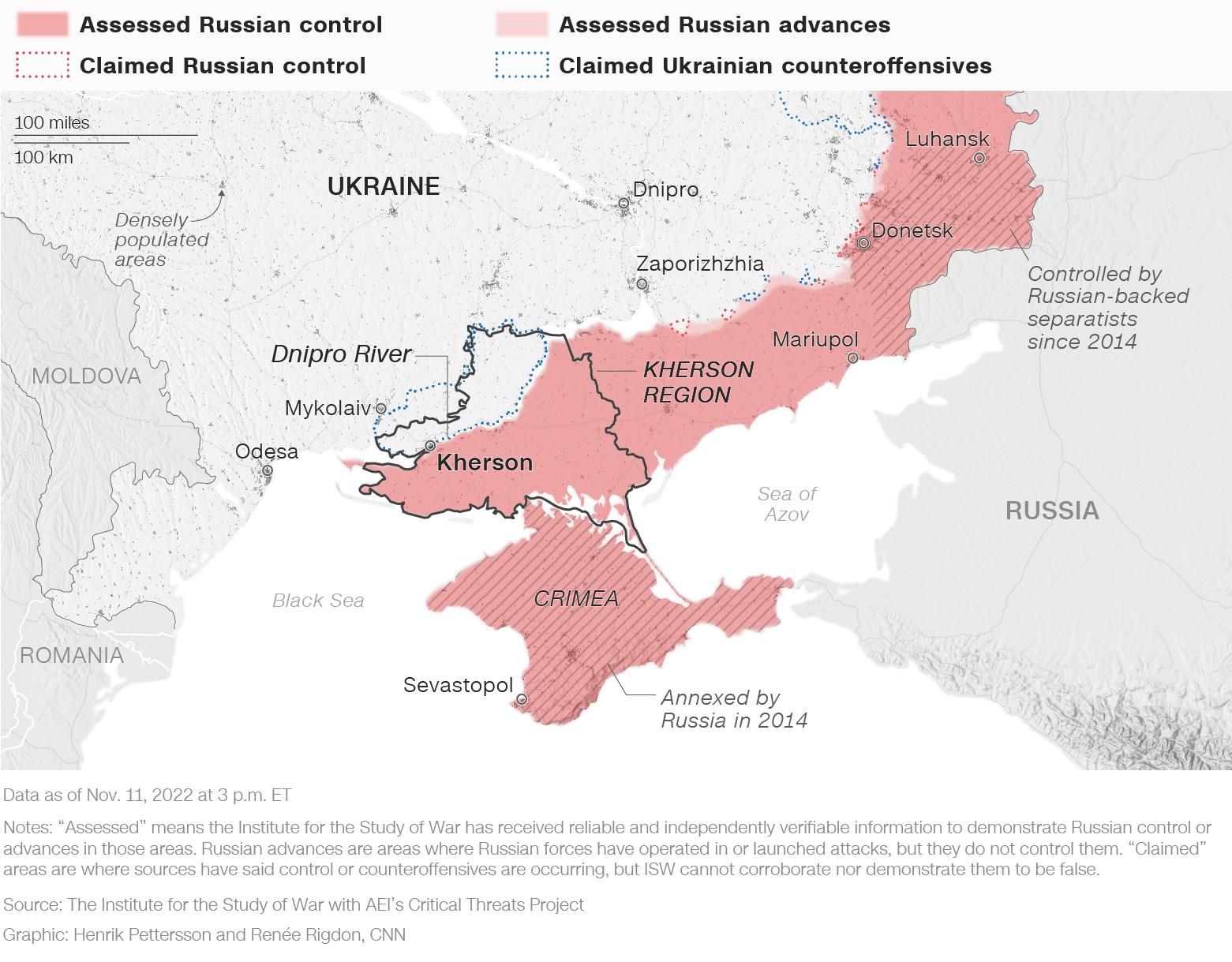 During internal conversations about the war in Ukraine, America's top general, Chairman of the Joint Chiefs of Staff Mark Milley, has in recent weeks led a strong push to seek a diplomatic solution as fighting heads toward a winter lull.

But Milley's position is not widely backed by US President Joe Biden's national security team, including Sec. of State Antony Blinken and national security adviser Jake Sullivan, neither of whom believe it's time to make a serious push for talks over Ukraine, according to two administration officials familiar with the discussion.

The result is a growing debate inside the administration over whether Ukraine's recent gains on the battlefield should spark a renewed effort to seek some sort of negotiated end to the fighting, according to officials.

Milley's push for peace has spilled into the public in recent days, just as Ukraine takes back the city of Kherson. In comments at the Economic Club of New York on Wednesday, Milley praised the Ukrainian army for fighting Russia to a stalemate, but said that an outright military victory is out of reach.

"When there's an opportunity to negotiate, when peace can be achieved, seize it. Seize the moment," Milley said.

The comments left administration officials unsurprised — given Milley's advocacy for the position internally — but also raised concern among some about the administration appearing divided in the eyes of the Kremlin.

While some Biden officials are more open to exploring what diplomacy may look like, sources tell CNN most of the top diplomatic and national security officials are wary of giving Russian President Vladimir Putin any sort of leverage at the negotiating table and believe Ukrainians must determine when to hold talks, not the US.

"That's up to the Ukrainians. Nothing about Ukraine without Ukraine," President Biden said at a Wednesday press conference when asked about the potential for talks.

In internal deliberations, officials say Milley has sought to make it clear that he is not urging a Ukrainian capitulation, but rather that he believes now is an optimal time to drive toward an end to the war before it drags into spring or beyond, leading to more death and destruction without changing the front lines, officials say.

Milley's position comes as the US military has dug deep into US weapons stockpiles to support the Ukrainians and is currently scouring the globe for materials to support Ukraine heading into winter — such as heaters and generators — which has raised concerns about how long this war can be sustained, officials said.

Russian-backed authorities have ordered evacuations in an area on the east bank of the Dnipro River in the Kherson region, sending administration staff and residents to a city in Russia.

“The administration of Kakhovka in the Kherson region moves to a safe place together with the residents of the city, that is now located in a 15-kilometer (about 9-mile) evacuation zone,” Pavel Filipchuk, Russian-backed head of the Kakhovka regional military administration, announced in an address to residents Saturday.

“Therefore, by order of the government of the Kherson region, we, as an authority, are moving to a safer territory, from where we will manage the district," he said.

Filipchuk said those who evacuate to the Russian city of Tuapse will be provided with “warm and comfortable accommodations, free three meals a day, the possibility of receiving financial assistance in the amount of 100,000 rubles (about $1,500) and a possibility of obtaining a housing certificate.”

Filipchuk emphasized that those who don’t evacuate bear full responsibility for their lives, warning that the Kakhovka district is subject to "shelling by the Armed Forces of Ukraine, and military fortifications are being built there.”

“Living conditions for civilians are becoming less comfortable every day,” he said. “The objects of the service sector are closing, objects of vital necessity — pharmacies, grocery stores. The work of communal enterprises and healthcare institutions is being transferred from the basic to the emergency support mode.”

Filipchuk said more than 3,000 people have been evacuated so far.

To note: As of Friday, new damage appeared on a critical dam that spans the Dnipro River in the Kherson region city of Nova Kakhovka, on the east bank of the river. For weeks, both sides have accused the other of planning to breach the dam, which if destroyed would lead to extensive flooding on the east bank and deprive the nuclear power plant in Zaporizhzhia of water to cool its reactors.

Authorities in the city of Kherson have introduced an evening and overnight curfew to ensure the safety of residents, the head of the regional military administration, Yaroslav Yanushevich, said Saturday in a video message.

“Our task is to ensure the safety of your life. Therefore, we are forced to introduce a curfew starting today, from 5 p.m. to 8 a.m. The corresponding order was signed by the head of the military administration of the city of Kherson,” he said.

Yanushevich also warned that leaving and entering the city will be limited due to de-mining efforts.

US Secretary of State Antony Blinken reiterated to Ukraine's foreign minister Saturday that the US would leave it to Kyiv to open any diplomatic negotiations with Russia, according to the State Department.

Blinken met with Foreign Minister Dmytro Kuleba while in Cambodia attending the summit between the US and Association of South East Nations (ASEAN) countries. He pledged to continue supporting Ukraine’s defense against the Russian invasion, specifically highlighting its defense of infrastructure and preparations for winter, State Department spokesperson Ned Price said in a statement.

The two diplomats “also discussed Ukraine’s continued effectiveness on the battlefield, and the Secretary reiterated that the timing and contents of any negotiation framework remains Ukraine’s decision,” Price said in the statement.

CNN has reported US officials are divided over whether to push for a diplomatic solution as fighting in Ukraine could slow down for winter.

When asked about the possibility of peace negotiations at a press conference on Wednesday, President Joe Biden said, “That’s up to the Ukrainians. Nothing about Ukraine without Ukraine.”

"I call on all ASEAN members to take every measure possible to stop Russia from playing 'hunger games' with the world. Grain corridor should be exempted from the conflict,” Dmytro Kuleba said during a press conference on the sidelines of the ASEAN summit.

The United Nations-brokered Black Sea grain deal put in place a procedure that guaranteed the safety of ships carrying Ukrainian grain, fertilizer and other food products through a corridor in the Black Sea.

“It's also important to make sure that Russian inspectors who participate in this initiative that they act in good faith and that they inspect ships without any artificial delays,” Kuleba said.
“Whatever happens on the battleground, Russia should not use this corridor as a blackmail, as a leverage in international relations," Kuleba added.

More background: The United Nations-brokered Black Sea grain deal put in place a procedure that guaranteed the safety of ships carrying Ukrainian grain, fertilizer and other food products through a corridor in the Black Sea.

Russia said last week that it was rejoining the grain export deal just days after Moscow cited drone attacks on the city of Sevastopol in Crimea as the reason for its withdrawal from the deal.

The Kremlin signaled Friday that it was unsatisfied with the handling of an agreement with the UN governing the export of Russian fertilizers and agricultural products, and that an extension of the grain deal would hinge on its complaints being addressed.

Ukrainian authorities are rebuilding and restoring services in the newly liberated city of Kherson, the head of the regional military administration said Saturday.

"The National Police and the Security Service of Ukraine have also taken up their duties. The State Service for Emergency Situations is clearing mines. We are working for the return of the city to normal life," Yanushevich said.

About 200 police officers are currently working in the city, Ukraine's National Police said in a statement Saturday.

"Roadblocks have been set up around and in the territory of Kherson. The regional police continue to record the crimes of the Russian occupiers," the statement reads.

"The main threat at the moment is mass mining," and 10 groups of explosive technicians are working on the detection and disposal of explosive objects, police said. "One of the police sappers was injured today during the de-mining of an administrative building in Kherson."

Police urged "local residents to follow the established rules, to move carefully around the city and not to touch suspicious objects. If you find any, be sure to report to the law enforcement officers."

Residents who have left Kherson are advised "not to rush to return until stabilization measures are completed," police said.

Once the scene of Russian occupation, the drive into newly liberated Kherson city was eerily quiet.

For much of the journey through smaller towns and settlements, our team of CNN journalists was forced to drive through diversions and fields; bridges over canals were blown up, and roads were full of craters and littered with anti-tank mines.

Trenches and checkpoints were empty, quickly abandoned by Russians who on Friday announced they had withdrawn from the west bank of the Dnipro River in the strategic southern region of Kherson, leaving the regional capital of the same name and surrounding areas to the Ukrainians.

The outskirts of the city, which had been occupied by Russian forces since March 3, were deserted, with no military presence except for a Ukrainian checkpoint around 5 miles outside of the city center, where half a dozen soldiers waved CNN’s crew in.

Once the scene of large protests against Russian plans to transform the region into a breakaway pro-Russian republic, the streets of Kherson are now filled with jubilant residents wrapped in Ukrainian flags or with painted faces, singing and shouting.

The military presence is still limited, but huge cheers erupt from crowds on the street every time a truck full of soldiers drives past, with Ukrainian soldiers being offered soup, bread, flowers, hugs and kisses by elated passersby.

After living under Russian occupation, every person we’ve spoken to has had experiences that terrified them. Earlier today, a teenager told CNN he had been taken and beaten by Russian soldiers who believed he was a spy. Residents told us they are emotionally exhausted and overwhelmed by what this newfound freedom means.

With the Russian forces gone, everyone wants you to understand what they’ve been through, how euphoric they feel right now and how much they’re grateful to the countries who have helped them.

But Ukrainians are under no illusion that Kherson’s freedom spells the end of their country’s ordeal or the difficulties that winter will bring.

Everyone we have spoken to is aware that there are tougher days to come, that the Russians across the river could shell them here. It is also unclear whether all Russian troops have left Kherson and the wider region. Behind this euphoria, there’s still that uncertainty.

But for today, at least, they’re celebrating.