Our live coverage has ended. Follow the latest Ukraine news here or read through the updates below.

Blackouts are threatening a long, harsh winter in Ukraine. The energy crisis is the result of Russian missile and drone strikes on civilian infrastructure — and Kyiv's Western allies are pointing the finger at Iran for supplying the drones. 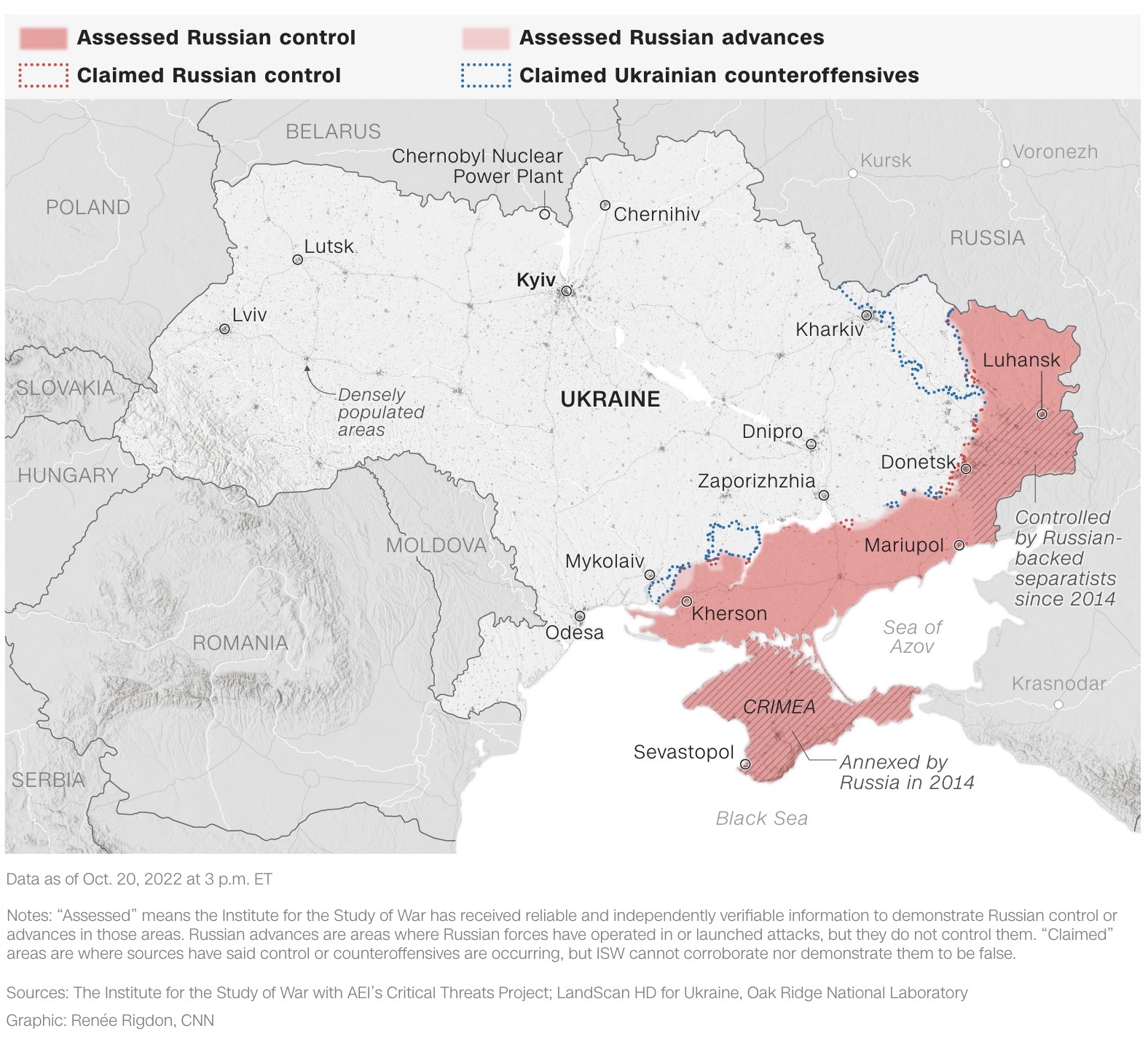 Russian President Vladimir Putin thinks drone attacks against civilian infrastructure in Ukraine “will somehow break the will of Ukrainian people," but the strikes are having the opposite effect, US Secretary of State Antony Blinken said Friday.

"He’s only deepening the resolve to defend their country,” Blinken said at a news conference with the French Foreign Minister Catherine Colonna at the State Department.

Blinken repeated the US assertion that Russia's drones are supplied by Iran, an assessment echoed by a growing number of international bodies this week. Moscow and Tehran officials deny collaborating on the attacks.

The strikes have “a clear goal: to make the Ukrainian people suffer,” Blinken said.

“Moscow can knock out the lights across Ukraine, but it cannot, it will not, extinguish the Ukrainian spirit,” he added.

"The enemy is doing everything to slow down our food exports," Zelensky said in his evening address.

"I believe that by these actions, Russia is deliberately inflaming the food crisis to make it as acute as it was in the first months of this year. Today, more than 150 vessels are in line to fulfill contractual obligations to supply our agricultural products ... It occurred only because Russia deliberately delays the passage of ships."

CNN has not independently verified Zelensky's claim that Moscow is hindering the flow of shipments.

A tenuous agreement: The Black Sea Grain Initiative — which was brokered by the UN and Turkey — was signed by representatives from Russia and Ukraine in July.

Gennady Gatilov, Russia’s ambassador to the UN in Geneva, said last week that Moscow could leave the deal, according to Reuters. Later, President Vladimir Putin weighed in, saying Russia would shut the export corridors if they are used to carry out “terrorist attacks.”

More than 6,000 civilians have been killed since Russia invaded Ukraine, and the number is likely much higher than can be accounted for right now, according to the United Nations' authority on human rights.

"As of Oct. 18, the Office of the High Commissioner for Human Rights has recorded 15,956 civilian casualties: 6,322 killed and 9,634 injured since Feb. 24," Rosemary DiCarlo, the under-secretary-general for political and peacebuilding affairs, said while speaking at a UN Security Council meeting Friday.

"At least 397 children have been killed in the war," she said.

The UN is also concerned about the destruction of critical energy infrastructure, DiCarlo said.

"Combined with soaring gas and coal prices, the deprivation caused by these attacks threatens to expose millions of civilians to extreme hardship and even life-endangering conditions this winter," DiCarlo said, emphasizing that attacks targeting civilians and civilian infrastructure are prohibited.

She said the Independent International Commission of Inquiry on Ukraine submitted its report to the UN General Assembly this week.

"The document states that there are reasonable grounds to conclude that war crimes and violations of human rights and international humanitarian law have been committed in Ukraine," DiCarlo said.

"The impact of these violations on the people in Ukraine is immense — and so is the need for accountability," she continued. "Accountability remains crucial as new allegations of atrocities have emerged in areas that have recently returned to Ukrainian government control. We must not let impunity prevail."

An almost 2-kilometer fortification has been constructed outside the Russian-occupied town of Hirske, in eastern Ukraine, new satellite images from Maxar Technologies show.

The fortification comprises of four rows of cement pyramids that the Russians hope will stop any Ukrainian vehicles and tanks from moving eastward. A large trench is located behind the anti-tank fortifications.

Two Russian media outlets have reported from the fortification site, which they named the "Wagner Line" referring to the Russian mercenary Wagner Group. Zvedza TV, the media outlet for the Russian military, said it was a "second line of defense" if the Ukrainians tried to break through in the area.

Although the fortification could help defend against a frontal attack, there's nothing stopping Ukrainian forces from just traveling around the fortifications, which only stretch 1.6 kilometers or just over a mile.

RIA/FAN, a Russian tabloid, published a map on Wednesday claiming the Wagner group would continue building their "line" until it stretches east from the Russian-Ukrainian border to Kreminna, and then south to Svitlodarsk.

A CNN analysis of the map showed that a fortification that long would stretch roughly 217 kilometers, or about 135 miles.

Additional satellite imagery reviewed by CNN did not show that any other construction along the purported path of the "Wagner Line."

It's not the first time the Wagner Group has utilized trenches to fortify their positions. In 2021, the mercenary group constructed roughly 40 miles, or more than 70 kilometers, of trenches across the Libyan desert to stop ground attacks on their positions there.

The people of Ukraine are "ready to suffer" through a potentially dark and cold winter as long as Russian troops are still occupying Ukraine’s territory, the country’s infrastructure minister told CNN on Friday.

“Everybody feels that our army on the battlefield is winning," Oleksandr Kubrakov told CNN’s Julia Chatterley. But they also understand that the attacks on the infrastructure are aimed at making people's lives more complicated, he said.

Some background: Days of devastating attacks on energy infrastructure have caused the nation to lose at least 40% of its power-generating capacity.

Ukrainian officials warned earlier this week that both emergency and scheduled blackouts would follow. Those power outages impacted the capital Kyiv and other central regions Thursday before expanding to eastern regions.

A top priority for Ukraine now is to maintain connectivity between different regions for military and humanitarian transport, while also keeping the energy infrastructure running, Kubrakov told CNN.

Ukraine will not negotiate with Russia as long as Russian soldiers are still occupying Ukrainian land, he added.

Three members of the US House Intelligence Committee met with Ukraine’s President Volodymyr Zelensky in Kyiv on Friday.

It is the first visit by a congressional delegation to the city in more than a month, and the first since Russia began a campaign of air strikes targeting civilian infrastructure in the Ukrainian capital and other major cities.

Standing close to the site of a recent drone attack on a power plant in Kyiv, Rep. Jim Himes, the head of the delegation, told CNN’s Nic Robertson the visit was about showing solidarity with Ukraine, which he said was “fighting for the democracy that so much of the world cares about.”

GOP Rep. Mike Turner said “there is strong bipartisan support for Ukraine, and it will continue," when asked by CNN whether US aid to Ukraine could change if Republicans gain control of the House in November's midterm elections.

Remember: That issue became a campaign trail talking point this week after House Republican Leader Kevin McCarthy said if the GOP wins the chamber, it may not be as forthcoming with aid to the embattled nation.

US President Joe Biden seized on those comments and similar remarks from some Republicans, framing the position as undermining US leadership in an increasingly volatile world.

Creating an "air shield": Ukraine's military considers bolstering its air defense capabilities a key concern. Zelensky appealed to the visiting delegation for help with creating what he described as an “air shield” over the country, according to a statement released by his office.

Turner told CNN the US supply of weapons and intelligence to Ukraine would change as the nature of the threat changes.

“We're looking at both air defense and also ways in which we can defeat these individual drones. But we're going to have to accomplish that together," he said. "Our goals are aligned."

Top British, French and German diplomats are urging the United Nations to investigate Iran’s supply of drones to Russia, according to a letter reviewed by CNN.

In the letter, officials argue that the weapons transfers violate a UN Security Council resolution restricting the flow of certain arms to or from Iran.

“We would welcome an investigation by the UN Secretariat team responsible for monitoring the implementation of UNSCR 2231 and stand ready to support the work of the Secretariat in conducting its technical and impartial investigation,” the diplomats wrote to UN Secretary General António Guterres Friday.

UNSCR 2231 was tied to the 2015 Iran nuclear deal. The diplomats said both Iranian drone models were manufactured after the resolution entered into force and that the transfer “has not been permitted in advance by the Security Council.”

The three countries would like a UN team to visit Ukraine to investigate the matter, accordin got the letter. Earlier this week, a Russian ambassador said Moscow would “reassess” cooperation with Guterres if a team of experts are sent to Ukraine to inspect the drones.

Some background: A growing number of countries and international organizations have condemned Russian-Iranian coordination on drone strikes, which have at times targeted civilian infrastructure.

Both Moscow and Tehran officials deny that Iran has supplied and trained Russia's forces in using the deadly weapons.

Earlier this week, State Department spokesperson Ned Price said the US has “abundant evidence” that Russia is using the Iranian drones, specifically to target Ukrainian civilians and critical civilian infrastructure. The White House added claims that Iran's military gave the Russians hands-on training with the weapons.

Earlier this week the European Union and the United Kingdom rolled out sanctions on the manufacturers of Iranian drones.