Moscow is running thin on military weapons and staving off "desperation at many levels inside Russian society," according to the head of the UK's largest spy agency.

“We’ve seen, because of the declaration for mobilization, that it’s running short of troops. So I think the answer to that is pretty clear. Russia and Russia’s commanders are worried about the state of their military machine,” Fleming said Tuesday.

When asked if the Kremlin is desperate amid President Vladimir Putin's faltering military campaign in Ukraine, Fleming added: "We can see that desperation at many levels inside Russian society and inside the Russian military machine."

Fleming's comments came after Russia launched a wave of deadly strikes across Kyiv and other Ukrainian cities Monday, damaging critical infrastructure and killing at least 19 people.

“Russia, as we’ve seen in the dreadful attacks yesterday, still has a very capable military machine. It can launch weapons, it has deep, deep stocks and expertise. And yet, it is very broadly stretched in Ukraine," Fleming said.

The violent strikes follow Putin's announcement of immediate military escalation in September, in which he threatened the possibility of nuclear retaliation.

"I think any talk of nuclear weapons is very dangerous and we need to be very careful about how we're talking about that," Fleming said when asked about Putin's nuclear threats.

"I would hope that we would see indicators if they started to go down that path. But let's be really clear about that, if they are considering that, that would be a catastrophe in the way that many people have talked about," he added.

In a speech later Tuesday, Fleming will also say Russians are increasingly counting the cost of the invasion of Ukraine and are seeing "how badly" Putin "has misjudged the situation."

“With little effective internal challenge, his decision-making has proved flawed. It’s a high stakes strategy that is leading to strategic errors in judgement. Their gains are being reversed,” Fleming will say in an address at the Royal United Services Institute (RUSI) annual security lecture in London.

The costs to Russia — in people and equipment are staggering. We know — and Russian commanders on the ground know — that their supplies and munitions are running out. Russia’s forces are exhausted.”

The senior spy chief will also say that ordinary Russians are “fleeing the draft.”

"They know their access to modern technologies and external influences will be drastically restricted. And they are feeling the extent of the dreadful human cost of his war of choice," he will say.

The two will discuss Ukraine and bilateral issues, Peskov said in a call with journalists.

Putin is expected to travel late Wednesday, he added.

Their meeting was “prescheduled,” but the recent escalation in the war in Ukraine “has given this trip added impetus,” the UAE’s presidential adviser Anwar Gargash told CNN on Tuesday.

“This was a prescheduled official trip which was supposed to focus mostly on bilateral issues but the recent escalation in the war in Ukraine has given this trip added impetus,” Gargash said, adding that the UAE's president will meet Putin in Moscow where he will now also discuss “seeking a political and diplomatic course.”

Some background: Sheikh Mohammed's visit to the Russian capital comes less than a week after OPEC+, the international cartel of oil producers, agreed to slash production by 2 million barrels per day — twice as much as analysts had predicted and in the biggest cut since the Covid-19 pandemic.

The UAE is a member of the organization led by Saudi Arabia and Russia.

An intense pressure campaign by the US to dissuade its Arab allies from the cut ahead of the decision failed. Russia is already pumping below its OPEC+ ceiling, and the bulk of the cuts will be made by Gulf producers. 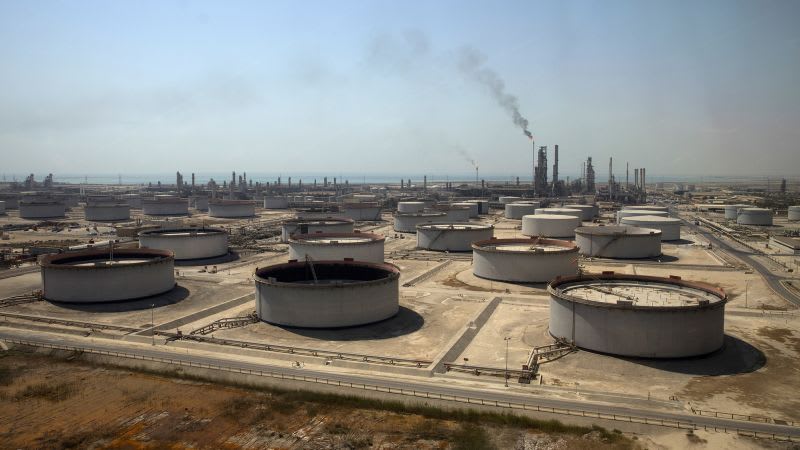 The bodies of 62 Ukrainian soldiers were "returned home" on Tuesday after “difficult” negotiations, according to the country’s Ministry for Reintegration of the Temporary Occupied Territories.

“62 fallen heroes were returned home,” the ministry's statement said, adding that the bodies included those of soldiers who had been held at a prison in Olenivka.

Olenivka is in the part of the Donetsk region that has been held by pro-Russian forces for eight years. In July, an attack on the facility resulted in the deaths of at least 50 prisoners.

The Belarusian Ministry of Defense said on Tuesday that the joint deployment of forces with Russia is a defensive measure.

“The tasks of the Regional Grouping of Forces are purely defensive. And all the activities currently being carried out are aimed at an adequate response to actions near our borders,” Minister of Defense Lt. Gen. Viktor Khrenin said in a statement.

The moves were to ensure "security" along the border between Belarus and Ukraine, Khrenin added. “Again, based on threats, regrouping can be carried out to cover certain areas.”

Some background: On Monday, Belarus President Alexander Lukashenko announced that Belarus and Russia will "deploy a joint regional group of troops” that deepens the military cooperation between the two countries. He had also claimed that Ukraine is planning to attack Belarusian territory, but the Ukrainian Foreign Ministry said, "this information is not true."

Hours later, Andrei Kartapolov, head of the Russian Duma's Defense Committee, said "there is no need" for Belarusian troops to participate in Moscow's "special military operation" — the term used by Russian President Vladimir Putin to refer to the country's invasion of Ukraine.

Russian rockets have hit two “energy facilities” in the Lviv region of western Ukraine, according to a military official.

“As of now, it’s known about three explosions at two energy facilities in the Lviv region,” Maksym Kozytskyi, head of the regional military administration, said on Telegram Tuesday.

Parts of the region were already without power following Russian strikes on energy facilities in Lviv and other major Ukrainian regions on Monday.

A doctor at the Okhmatdyt children's cancer hospital in Kyiv was among those killed by Russian missile strikes on Ukraine Monday, according to the organization.

Oksana Leontieva was on her way to work after dropping her 5-year-old son at kindergarten when a missile hit the Ukrainian capital.

“Her car burned to the ground in the center of Kyiv,” the hospital said on Facebook.

Leontieva was a hematologist who had worked in Okhmatdyt’s bone marrow transplant unit for 11 years.

“This young woman was a true professional and support for her patients and colleagues,” the hospital added.

“She was a dedicated and responsible person and doctor ... Our condolences to the family, relatives and colleagues of Oksana Lentieva. This is a great loss for Okhmatdyt and all of Ukraine.”

The Kremlin launched a series of deadly attacks across Kyiv and other major Ukrainian cities Monday, which left 19 people dead and injured more than 100 others.

Moscow's fatal strikes on Kyiv and other major Ukrainian cities Monday were a “logical consequence” of recent events in the war, according to a spokesperson for the Russian Embassy in Paris.

“Russia has been kind until the last moment, giving (President Volodymyr) Zelensky and his regime the opportunity to think and show common sense,” Alexander Makogonov, a spokesperson for the Russian Embassy in France, said Tuesday.

“Do not mistake our kindness for weakness,” Makogonov told French radio station Franceinfo.

“On the contrary, the Ukrainian authorities have preferred to overdo it. Notably through this atrocious attack on a critical civil infrastructure object which is the Crimean bridge,” he added.

Russia launched a wave of violent airstrikes across Ukraine earlier this week, two days after an explosion damaged a crucial bridge to Crimea and dealt a strategic blow to the Kremlin.

Putin's recent military escalation in Ukraine comes as Russia contends with heavy losses on the battlefield and low morale among troops.

A children's playground in Kyiv was among the sites hit by a rocket or missile. When asked to explain the destruction seen at the playground, Makogonov said that those were the result of malfunctioning Ukrainian air defense systems.

"You should know that the Russian army, when carrying out this kind of strikes, uses very sophisticated weapons. These are the weapons of the new generation of very high precision," he added.

Ukrainian President Volodymyr Zelensky spoke with Angolan President João Lourenço on Monday about the war in Ukraine as well as "important issues of co-operation."

Zelensky has been contacting African leaders to build relationships and support against Russia. Angola was among 17 African countries that abstained from a United Nations resolution in March that condemned Russia’s invasion of Ukraine.

In a tweet posted Monday Zelensky said: "Had a phone call with the President of Angola @jlprdeangola. Informed him about the terrorist missile attacks on Ukraine by the RF. Discussed important issues of cooperation within the UN. The world must take a clear and firm stance on Russian aggression. We keep working on it!"

The Angolan presidency confirmed the meeting in a statement posted on Facebook : "On Monday afternoon, the President of the Republic, João Lourenço, spoke by phone with the President of the republic of Ukraine, Volodymyr Zelensky. The military conflict in which Ukraine has been involved since last February was the topic discussed."