Eurpean Parliament President Roberta Metsola told CNN on Monday that the EU needs to do more to help Ukraine in light of Russia’s escalation by providing more military equipment.

“I think all countries could and should do more,” Metsola told. “What we've seen today shows that Russia will continue to escalate further… How are we going to respond? If our response is not proportionate to the escalation, then we're just going to keep seeing him killing more people.”

Metsola said sanctions by the European Union were “clearly not enough” and she called on all member states to come together and provide more weaponry, specifically tanks, which the Ukrainians have requested.

“Ukraine is asking for them, and the European Union has the facility to coordinate what it gives to Ukraine. I know the high representatives very much working on this. I know from military perspective we can do more," she said.

US President Joe Biden said Russian missile strikes hitting Kyiv and other cities in Ukraine on Monday "once again demonstrate the utter brutality of Mr. Putin’s illegal war on the Ukrainian people."

"These attacks only further reinforce our commitment to stand with the people of Ukraine for as long as it takes," Biden wrote in a statement Monday. "Alongside our allies and partners, we will continue to impose costs on Russia for its aggression, hold Putin and Russia accountable for its atrocities and war crimes, and provide the support necessary for Ukrainian forces to defend their country and their freedom."

"We again call on Russia to end this unprovoked aggression immediately and remove its troops from Ukraine," Biden said.

“I just spoke with @DmytroKuleba to reiterate U.S. support for Ukraine following the Kremlin’s horrific strikes this morning. We will continue to provide unwavering economic, humanitarian, and security assistance so Ukraine can defend itself and take care of its people,” Blinken tweeted.

There have been explosions in the Kryvyi Rih city, said Oleksandr Vilkul, head of the city's military administration in the Dnipropetrovsk region.

There are no details yet of damage or casualties.

Russia struck multiple Ukrainian cities with missiles and drones, according to Ukrainian authorities. Catch up on everything you need to know on Monday's developments so far:

Strikes hit multiple Ukrainian regions: A total of 84 cruise missiles were fired at Ukraine Monday along with a number of attack drones, Ukrainian officials say, adding that the military destroyed 56 of the Russian weapons. Critical infrastructure facilities — mainly energy supply facilities — were hit in multiple regions and in the city of Kyiv, where more than 30 fires broke out, the Ukrainian State Emergency Service (SES) said. At least 11 people died and 64 were injured following the attacks, officials said.

Critical infrastructure was impacted in some areas: At least four regions — Lviv, Poltava, Sumy and Ternopil — had no electricity supply. Authorities requested Lviv residents who may have access to electricity to only use it for "urgent needs." Kyiv had briefly suspended its subway operations. The region of Khmelnytskyi, which lies west of Kyiv, has "no electricity supply, electric transport does not work, water supply is suspended, traffic lights do not work," according to the region's head. Ukrainian President Volodymyr Zelensky said in a Telegram post Monday that the government was "doing everything necessary to quickly restore electricity supply." Meanwhile, Ukraine's Prime Minister Denys Shmygal said "preliminary data shows most of the energy facilities will be reconnected today. The rest will start working tomorrow." 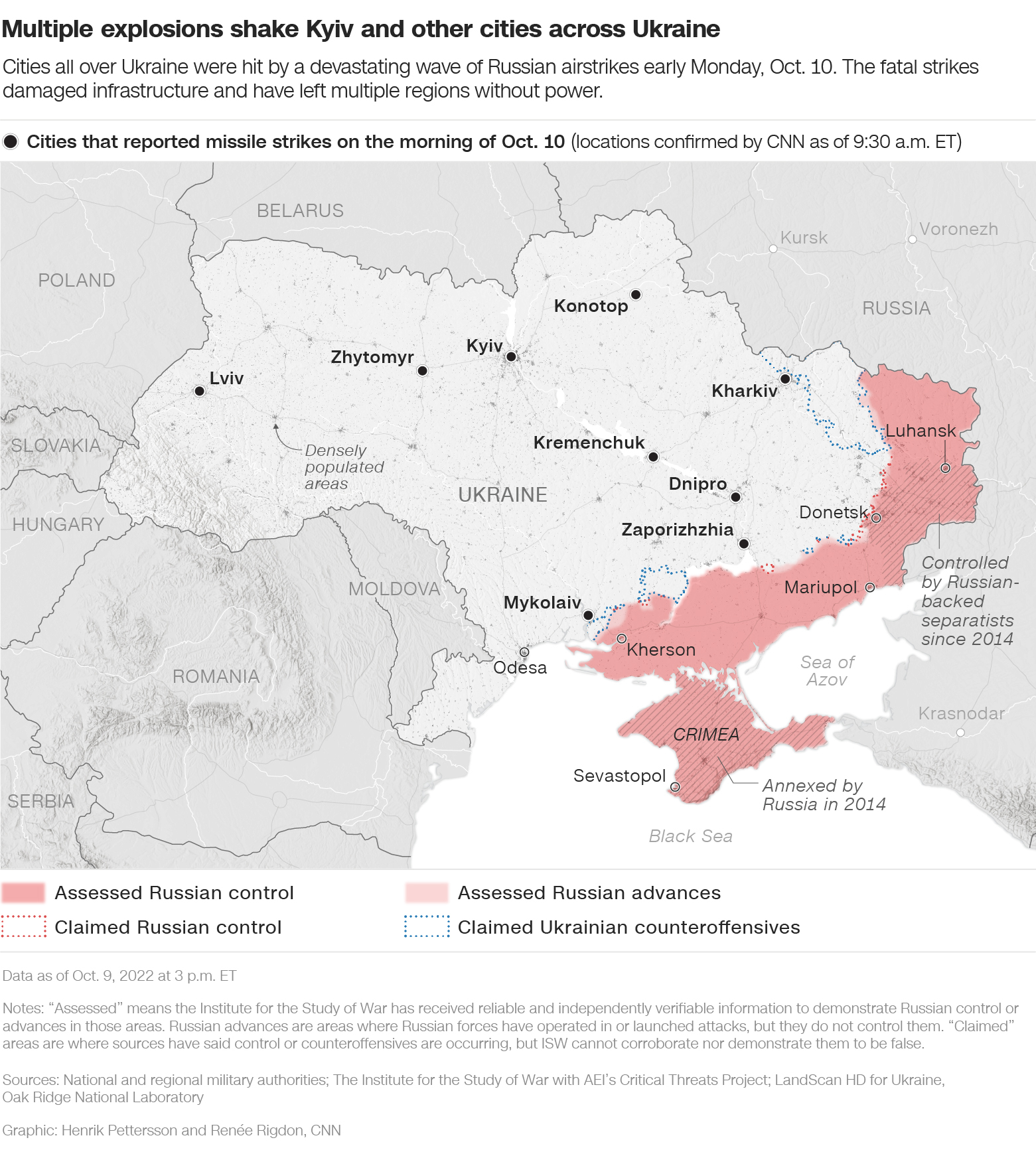 Putin blames Ukraine for attack on Crimean bridge: Ukraine has not claimed responsibility for the Crimea bridge blast, but Russian President Vladimir Putin has accused Ukrainian "special services" of the attack. He said Monday's strikes were in response to the attack, but Ukrainian intelligence says the strikes had been planned since early last week.

China and India also call for de-escalation: After the strikes, China expressed hope that the situation in Ukraine will “de-escalated soon.” India has said it is "deeply concerned" by the escalation of the conflict and said that "escalation of hostilities is in no one's interest," urging an "immediate cessation of hostilities" and return to the "path of dialogue." Other European leaders have also condemned the attack.

Escalation in the war: Monday's strikes come on the heels of other recent attacks across Ukraine. Last week, Russian forces intensified missile attacks on residential buildings in Zaporizhzhia over the past week, with at least 43 civilians dead in the past week, including 14 on Saturday alone, according to Zelensky. Then the huge explosion occurred early Saturday severely damaging the only bridge connecting annexed Crimea to the Russian mainland, causing parts of the structure to collapse. At least three people were were killed, according to Russian officials.

Here's a look at where the state of control stands on Ukrainian territories along with the Crimean bridge: 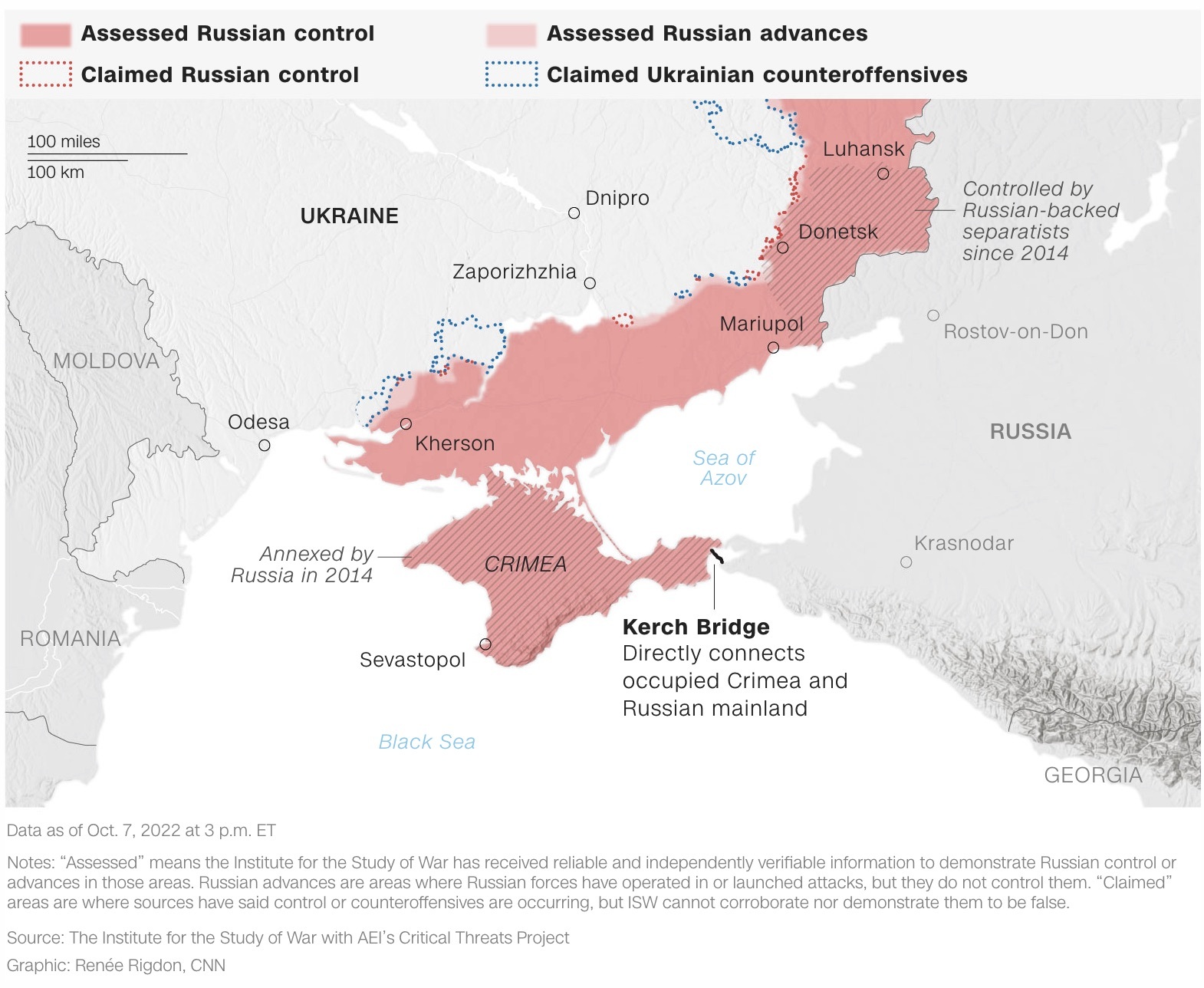 “The Secretary-General is deeply shocked by today's large-scale missile attacks by the armed forces of the Russian Federation on cities across Ukraine that reportedly resulted in widespread damage to civilian areas and led to dozens of people being killed and injured,” the spokesperson said.

“This constitutes another unacceptable escalation of the war and, as always, civilians are paying the highest price,” the statement added.

“It’s a profound change of the nature of this war,” Macron told journalists on a trip to the French region of Mayenne. His comments were confirmed to CNN by the Elysee Palace.

He added that he will be meeting with his diplomatic and military counsellors regarding the strikes upon his return to Paris.

Ukrainian President Volodymyr Zelensky posted an image of a meeting he's holding with officials to discuss restoring communications and energy supply after the latest wave of Russian strikes, saying in a post on Telegram that the "enemy has damaged our energy infrastructure, but now we are doing everything necessary to quickly restore electricity supply."

"The infrastructure that provides mobile communication was not damaged. In some places, there were interruptions due to lack of power supply," Zelensky said.

"It is important to reduce electricity consumption from 5 to 10 pm. This will ease the load on our power grid and reduce the need for emergency outages," he said.

"We are holding on. We are working. We are united," he continued.

At the same time, Ukraine's Prime Minister Denys Shmygal said that dozens of missiles had hit energy infrastructure in 11 regions and the capital city of Kyiv. "Power supply has been disrupted in almost the whole of Ukraine. Eight regions suffer water supply problems," he said.

"Preliminary data shows most of the energy facilities will be reconnected today. The rest will start working tomorrow," he said.

"Power is back in Sumy already. We are on the way in Zhytomyr and Kharkiv. Emergency schedule of turning the power off is in place in Kyiv and Kyiv region, Chernigiv, Cherkassy and Zhytomyr regions," Shmygal said.

India has said it is "deeply concerned" by the escalation of the conflict in Ukraine following Russia's missile strikes on Kyiv and other Ukrainian cities on Monday.

"India is deeply concerned at the escalation of the conflict in Ukraine, including targeting of infrastructure and civilian deaths," Ministry of External Affairs spokesperson Arindam Bagchi said in a tweet.

Earlier on Monday, India’s Minister of External Affairs Subrahmanyam Jaishankar declined to say whether the country would vote to condemn Russia's annexation of Ukrainian territory in the upcoming United Nations General Assembly (UNGA) session on Wednesday.

“As a matter of prudence and policy, we don’t predict our votes in advance,” Jaishankar said during a news conference with Australia's Minister for Foreign Affairs Penny Wong in Canberra, Australia.

In September, the country's leader Prime Minister Narendra Modi told Russian President Vladimir Putin that “today’s era is not of war,” calling on him to cease hostilities in Ukraine.

With previous reporting from CNN’s Jake Kwon in Hong Kong