The death toll after Russian missile strikes hit a city apartment building has risen to 14, according to Anatolii Kurtiev, secretary of the Zaporizhzhia city council.

"We continue to receive disheartening news from the dismantling of the rubble on the buildings damaged by yesterday's attack. The death toll has now risen to fourteen," Kurtiev said on Telegram.

Some background: Moscow launched a series of fatal missile attacks on the city of Zaporizhzhia early Thursday, just hours after the Kremlin signed a decree to formally seize a massive nuclear power plant nearby.

The city of Zaporizhzhia is not far from the front lines of the conflict. Though the city is under Ukrainian control, about 75% of the greater Zaporizhzhia region is occupied by Russian forces.

That region is one of four Ukrainian territories Russia is claiming to annex in violation of international law.

The International Atomic Energy Agency (IAEA) said its Director General Rafael Grossi has confirmed a rotation of its staff at the Zaporizhzhia nuclear power plant, which is located on Russian-occupied territory in Ukraine.

In a series of tweets, the IAEA said that "the first rotation of the IAEA Support and Assistance Mission to #Zaporizhzhya (ISAMZ) in #Ukraine is complete and now a new reinforced team of IAEA safety, security, and safeguards experts is at the plant."

Grossi said he was "immensely grateful" to the two experts who've been at the plant over five weeks, and to the four members of the new team.

"This is crucial work that they are doing in very challenging circumstances and we are very proud of them," he said.

The IAEA also confirmed that shelling at an industrial area near the plant on Thursday had damaged a power line providing electricity to reactor unit 6, forcing the unit to temporarily rely on its emergency diesel generators instead. It said that five diesel generators supplied power to the reactor for about an hour and a half, while an alternative source of power from four of the other reactors was connected to the unit, "whose core cooling was maintained at all times."

Grossi concluded a visit to Ukraine Thursday, saying that after his meeting with President Volodymyr Zelensky, he had reiterated the IAEA will continue to be guided by international law, thereby not recognizing Russia's annexation of the area where the nuclear power plant is located.

"We made progress towards a nuclear safety & security protection zone at #Zaporizhzhya NPP. I'll return to Kyiv soon to continue this important exchange," he tweeted.

Speaking during a news conference after an informal European Union leaders' summit in Prague, French President Emmanuel Macron said the fund would “enable Ukraine to buy directly from our manufacturers the equipment it needs most to support its war effort and its resistance to Russian assaults.”

This follows remarks Macron made during a news conference on Thursday evening, which saw him pledge to send further French CAESAR howitzers to Ukraine.

During his address on Friday, Macron also delivered a message of caution when it comes to threats from Russia of a potential nuclear conflict.

When asked if he shared the view of US President Joe Biden, who warned of a nuclear "Armageddon" in response to Putin’s nuclear threats, Macron replied, “we all have to be very careful about this.”

The French president called for the “quickest possible de-escalation” carried out in “terms that are acceptable to the Ukrainian leaders and the Ukrainian people.”

Two burial sites have been located in the town of Lyman, which was recently liberated by Ukrainian forces after being occupied by the Russian military and its militia allies for several months, according to authorities in Donetsk region.

One of the sites had about 200 single graves where civilians had been buried, said Pavlo Kyrylenko, head of Donetsk region military administration.

At the other site, there is a mass grave, which "may contain both military and civilians," Kyrylenko said. "The exact number is yet to be established."

Law enforcement officers are investigating these places and will soon begin the exhumation process, he added.

In Sviatohirsk, which was under Russian occupation for about three months, Kyrylenko claims 21 bodies were reburied. These were civilians who died during the occupation, he said.

All the bodies that had been reburied were identified and properly buried, he added.

Valentyn Reznichenko, head of Dnipropetrovsk regional military administration, said that Nikopol, the city across the Dnieper River from the Zaporizhzhia nuclear power plant, has come under fire again.

"In the evening, Russians shelled Nikopol district again. They hit with 'Grad' MLRS and heavy artillery," Reznichenko said on Telegram.

There are also reports of shelling near Enerhodar, the city adjacent to the nuclear plant.

Mayor Dmytro Orlov said Friday afternoon that "there are currently reports about heavy shelling that caused a sudden power outage. Along with the electricity, there is also no water supply. There is no internet in the city."

The radiation background at the Zaporizhzhia plant industrial site and in the city itself was normal, he said.

The Russian strikes in Zaporizhzhia come after Russian President Vladimir Putin signed a decree earlier this week federalizing the Zaporizhzhia plant, which is located about 120 kilometers (75 miles) from the city and sits in Russian-occupied territory along the Dnipro River.

If you're just joining us, here's the latest on Friday's developments in Russia's war in Ukraine:

Ukrainian territories liberated in Kherson: The Ukrainian military has liberated 2,400 square kilometers (more than 926 square miles) of territory in the south "since the beginning of the full-scale war," according to Kyrylo Tymoshenko, a senior Ukrainian official. Almost all of that land has been recovered in the past two weeks as Ukraine has stepped up its counteroffensive in Kherson, which is one of the regions Russia has claimed it is annexing. The recaptured areas includes six settlements that were liberated in the Kherson district and 61 settlements that were recaptured in the region's district of Beryslav, according to Tymoshenko. Meanwhile, Ukraine's Defense Minister Oleksii Reznikov released a video Friday in which he urges Russia’s frontline troops to lay down their arms and promised “life, safety and justice” to those that do. 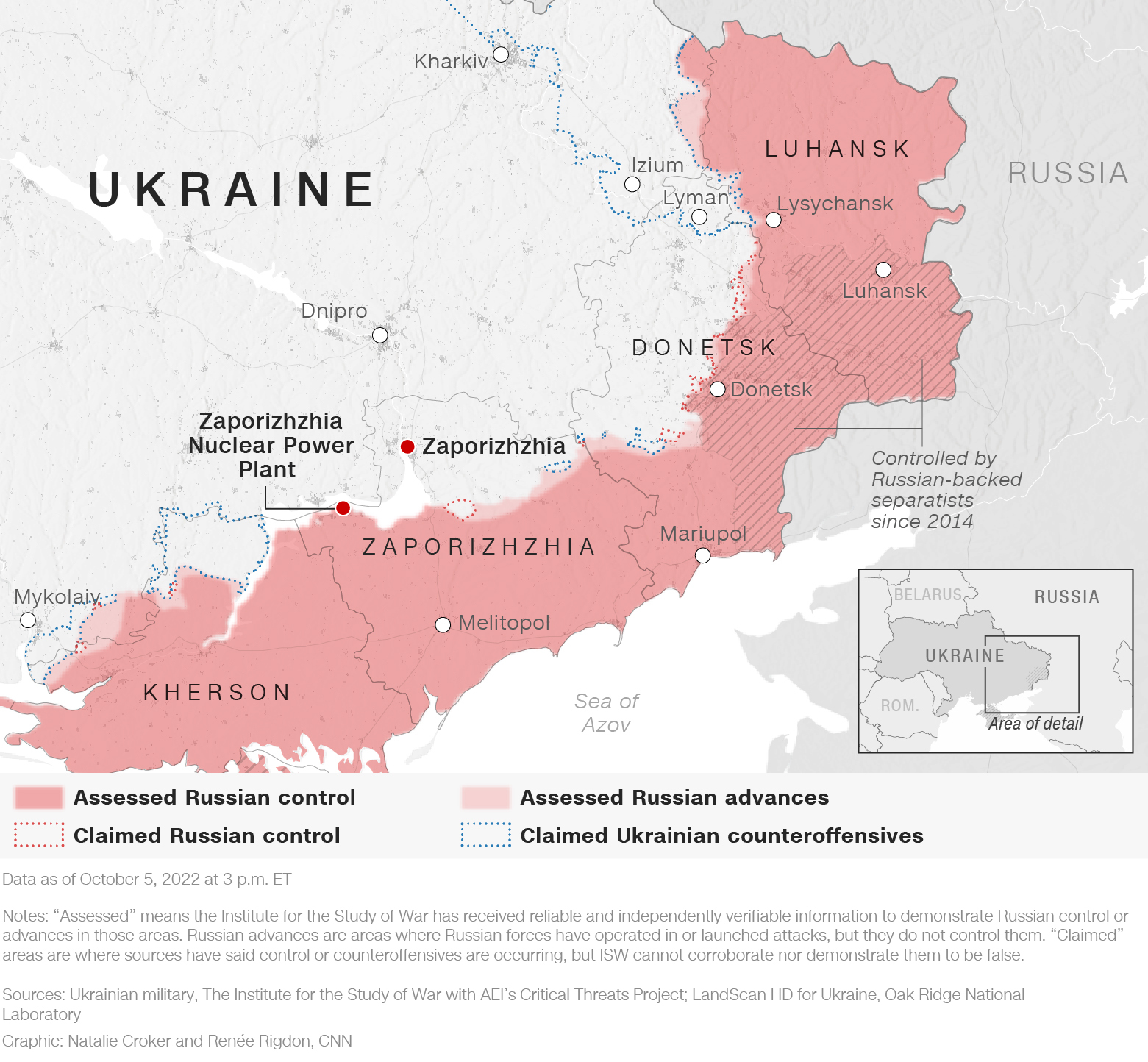 Russian shelling hits the district of Nikopol: Almost 40 Russian shells hit Nikopol, Valentyn Reznichenko, governor of the Dnipropetrovsk region, said in a post on Telegram. No injuries were reported but several high-rise buildings, more than 10 private houses, a transport infrastructure enterprise, gas pipelines and electricity networks were damaged, he said.

Deadly missile strikes in the south: Rescue operations are underway in the southern city of Zaporizhzhia after Russian missile strikes killed 11 people on Thursday, according to Ukrainian authorities. The bodies of 11 people were retrieved from two destroyed residential buildings. Additionally, 21 people were rescued, 13 of whom were hospitalized.

Fleeing Russians arrive on American shores: Two Russians crossed the Bering Strait and landed in Gambell, Alaska, earlier this week. They said they were seeking asylum to avoid Russia’s draft in the ongoing conflict with Ukraine. Alaska Gov. Mike Dunleavy said their arrival had been a surprise and that officials “don’t anticipate a continual stream of individuals.” The Russian Embassy in Washington has said its diplomats will hold a "telephone conversation" with two Russians, state media TASS reported.

Biden's nuclear warning: US President Joe Biden’s stark warning Thursday night that the world faces the highest prospect of nuclear war in 60 years was not based on any new intelligence about Russian President Vladimir Putin’s intentions or changes in Russia’s nuclear posture, multiple US officials told CNN. The US still has seen no evidence that Putin is moving toward using Russia’s nuclear capability, nor is there any intelligence showing he’s decided to do so. But Biden’s comments – laid out in starker terms than other US officials have used to date – reflected heightened concerns inside his administration about the risk of Russia carrying out a nuclear strike in Ukraine.

The Ukrainian security service says that some Russian soldiers in one occupied village in the southern Kherson region moved into a pig shed because of a lack of alternative accommodation.

The Russians had occupied the village of Lyubymivka, the security service said, where about 70% of the buildings had been destroyed during shelling.

What CNN saw on the ground: CNN visited the village this week and found that a school house being used by the Russians had been hit. The CNN team also found that Russian soldiers had also been living in a children's recreational center.

The security service said that there were about 200 civilians left in the village when it fell. During the occupation, locals had been banned from being outdoors after 6 p.m. local time. It said Russian soldiers had taken food and alcohol from local people and had hidden their weaponry in residential areas so that it would not be detected by Ukrainian drones.

The security service also said that it had found stolen washing machines at the pig farm.

The head of the Center for Civil Liberties, Oleksandra Matviichuk, whose organization jointly won the Nobel Peace Prize on Friday, has called for an international tribunal to bring Russian President Vladimir Putin, Belarusian President Alexander Lukashenko and “other war criminals to justice.”

In a Facebook post on Friday, Matviichuk said she was glad that the center had received the prize, along with the human rights group Memorial and jailed Belarusian advocate Ales Bialiatski.

She called for Russia to be removed from the United Nations Security Council for what she called “systemic breaches of the UN Charter.”

“UN and the member countries should resolve the problem of the ‘gaps in responsibility’ and provide a chance for justice to hundreds of thousands of war crimes victims. Without this a steady peace in our region is impossible,” Matviichuk wrote.

She continued to say that her 20 years of experience in fighting for civil liberties and human rights “undoubtedly shows that everyday people have much more influence than they think.”

“Mass mobilization of everyday people in different countries of the world and their common voice can change world's history quicker than the UN intervention,” she added.

The Ukrainian military has liberated 2,400 square kilometers (more than 926 square miles) of territory in the south "since the beginning of the full-scale war," a senior Ukrainian official said Friday.

Almost all of that land has been recovered in the past two weeks as Ukraine has stepped up its counteroffensive in Kherson.

Meanwhile, the evacuation of civilians continued amid massive destruction to critical infrastructure in towns like Arkhanhelske, Vysokopillia and Osokorivka, all of which saw weeks of heavy fighting and indirect fire, Tymoshenko said, adding that de-mining was in progress.

Ukrainian forces have been making steady progress in Kherson since beginning an offensive at the end of last month. In his Thursday night evening address, Ukrainian President Volodymyr Zelensky said Kyiv has retaken more than 500 square kilometers (about 193 square miles) of territory in the southern Kherson region since Oct. 1.