The US is considering offering to use its most advanced underwater sound reading capabilities to analyze audio recordings from around the time of the Nord Stream gas pipelines' apparent sabotage, according to two sources familiar with the matter.

The US Navy's processing of the sonar signatures — the term for the unique underwater sounds — provided by Sweden and Denmark could boost the investigations by providing a more detailed picture of what was in the area at the time of the pipeline explosions and what caused them, sources said. While many countries have the capability to process underwater sounds, the US has the most advanced system, sources said.

The processing of the underwater sound is viewed as a key piece of the investigation in addition to what underwater investigators find, sources said. Officials have said satellite images from the days before the leaks are unlikely to prove helpful because it was cloudy.

But the degree to which the US assistance in processing the underwater recordings could be helpful will depend on the quality of the recordings. The quality of any recordings that the Swedes and Danes have is unclear, sources said.

Each type of underwater machinery like submarines, torpedoes and vessel engines makes a unique sound that is called a "sonar signature," and the US has an extensive library of these sounds.

A Navy spokesperson would not confirm the US is offering to analyze the sonar recordings but said the Navy is ready to help with the investigations.

"We are aware of reports concerning leaks to the Nord Stream pipelines. We stand ready to provide support and assistance in close coordination with our allies and partners, if needed," Capt. Tamara Lawrence said.

The Swedish National Seismic Network (SNSN) said it had detected the explosions and experts said that the SNSN could share recordings with the US for processing, but seismic recordings are not the same as high-quality sonar recordings.

"What they are looking for is known signatures of adversaries class of ships or known signatures associated with an act like opening a torpedo door. The goal is to determine what caused this. The quality of the data and the kind of historical data in the database will determine to what degree they can accurately attribute this event using sonar signatures," explained Mark Montgomery, the senior director of the Center on Cyber and Technology Innovation at the Foundation for Defense of Democracies.

The US has helped to analyze underwater recordings from the Swedes in the past, experts said.

These conversations about providing that assistance now come as the US Defense Department is doing "prudent planning" to see what assets, equipment and technical expertise the US has available to assist Baltic nations with the investigations, CNN reported last week.

The Kentucky Board of Elections' website, which posts information on how to register to vote, was also temporarily offline on Wednesday, but it was not immediately unclear what caused that outage. The board of elections' website is also managed by the Kentucky government, though the hackers did not specifically list the board as a target.

The websites in Colorado, Kentucky and Mississippi were sporadically available Wednesday morning and afternoon as administrators appeared to try to bring them online.

It's an example of the type of digital disruption or distraction that US officials and election officials are preparing for ahead of the November midterm elections. Websites like that of the Kentucky Board of Elections are not directly involved in the casting or counting of votes, but they can provide useful information for voters.

The hacking group claiming responsibility for Wednesday's website outage is known as Killnet and stepped up its activity after Russia's February invasion of Ukraine to target organizations in NATO countries. They are a loose band of so-called "hacktivists" — politically motivated hackers who support the Kremlin but whose ties to that government are unknown.

Some context: Killnet thrives off of public attention and bravado, and cybersecurity experts have to strike a balance between being mindful of Killnet's online antics and not hyping a low-level threat.

"We do not want to build up this group or convey a false sense of doom to scare people or give Killnet unwanted publicity," Jason Passwaters, chief operating officer of security firm Intel 471, previously told CNN. "This group is capable of causing disruptions, but it's up to organizations to understand what kind of risk Killnet actually poses to their operations."

President Volodymyr Zelensky said Wednesday that more settlements in the south of Ukraine have been liberated amid a Ukrainian counter-offensive in the Kherson region.

The communities of Novovoskrensenske, Novohryhorivka and Petropavlivka had been recaptured, he said in his daily address, suggesting that Ukrainian forces are making progress through the largely rural hinterland of Kherson.

The three settlements "were liberated from the pseudo-referendum and [subsequently] stabilized," he said.

However, Ukrainian forces remain some distance from Kherson's capital and other strategically important areas. 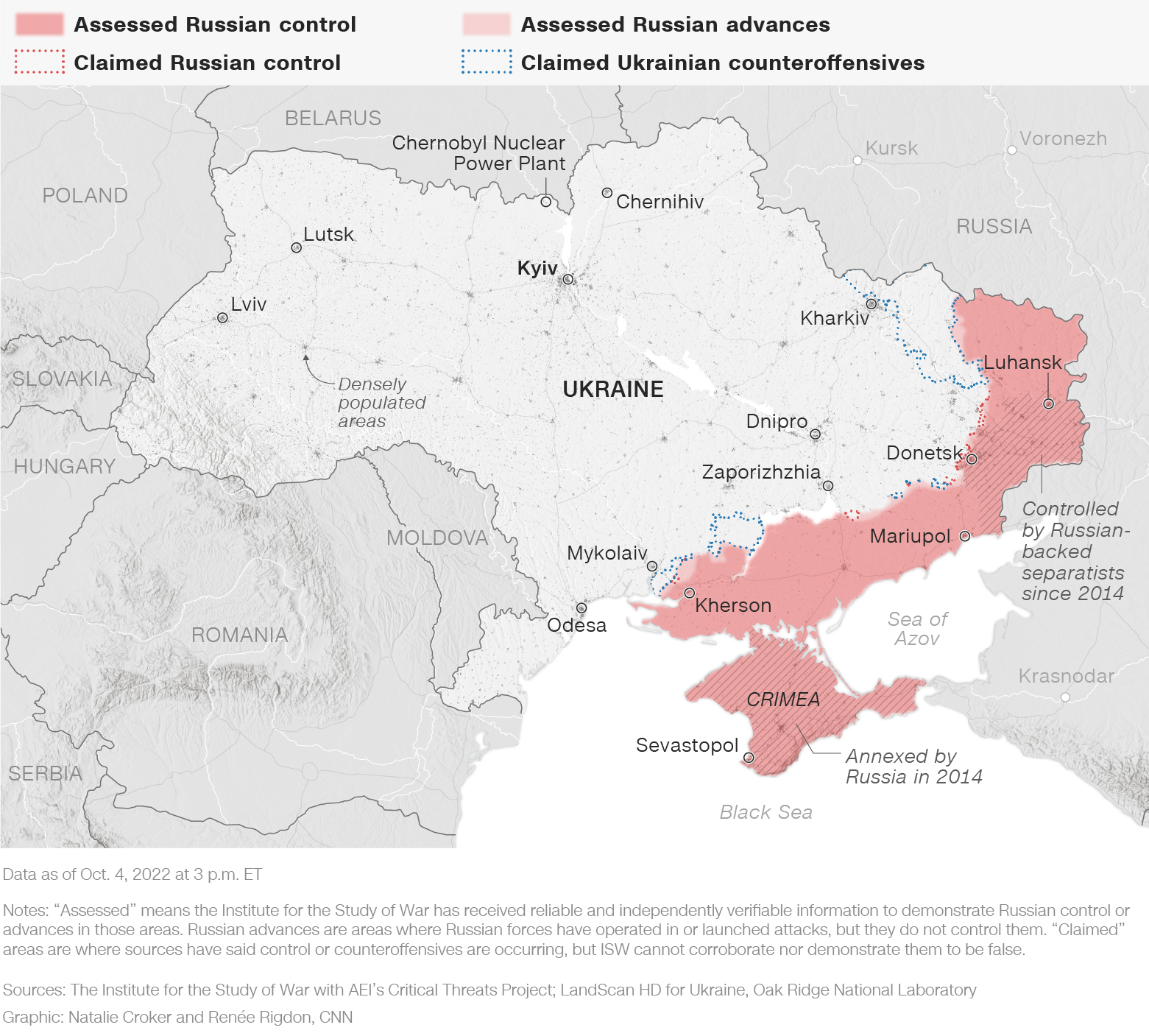 Russian Deputy Prime Minister Alexander Novak said on Wednesday that Russia will halt oil supplies to those countries that plan to introduce a price ceiling on Russian oil.

Novak was quoted by Russian state media RIA Novosti as saying: “We believe that it is not advisable for us to provide supplies with the introduction of such an instrument to those consumers who will benefit from price caps. We will continue to supply only to those who provide market-based pricing mechanisms."

"Our budget is formed at a price of $70 [per barrel], and we believe that this is a comfortable price, which today can be taken as a basis," he said.

More context: Both the G7 and the European Union have announced plans to penalize Russia for its invasion of Ukraine by setting a price cap for imports of Russian oil. The G7 plan calls on participating countries to deny insurance, finance and other assistance to Russian oil cargoes above a certain price. That price is yet to be determined.

The Czech government, which currently holds the EU rotating presidency, said Wednesday that a political agreement on the EU's eighth sanctions package against Moscow had been reached.

"The package contains: Prohibition of maritime transport of Russian oil to third countries above the oil price cap and a ban on related services," the Czech government said on Twitter.

Novak also said that Russia is ready to supply gas through the undamaged branch of the Nord Stream 2 gas pipeline.

The US intelligence community believes that the car bombing that killed Darya Dugina, the daughter of prominent Russian political figure Alexander Dugin, was authorized by elements within the Ukrainian government, sources briefed on the intelligence told CNN.

The US was not aware of the plan beforehand, according to the sources, and it is still unclear who exactly the US believes signed off on the assassination. It is also not clear whether the US intelligence community believes that Ukrainian President Volodymyr Zelensky was aware of the plot or authorized it.

But the intelligence finding, first reported by the New York Times, would seem to corroborate elements of the Russian authorities' findings that the car bombing was "pre-planned." Russia had accused Ukrainian nationals of being responsible for the attack, which Ukraine had strongly denied in the aftermath of the explosion.

Ukrainian government officials did not immediately respond to CNN's requests for comment.

The NSC, CIA and State Department declined to comment.

US intelligence officials believe that Dugina was driving her father's car on the night she was killed, and that her father was the actual target of the operation, one of the sources said. Dugin is a Russian ultranationalist and philosopher who has been a fierce proponent of Russia's war in Ukraine. A friend of Dugina also told the Russian  news outlet TASS shortly after the explosion that the car she was driving was her father's.

To date, Ukrainian strikes inside Russia have largely been limited to attacks on fuel depots and military bases in cities along the Russia-Ukraine border, like Belgorod. But the US does not have good visibility into all of Ukraine's planned strikes, sources told CNN.

Despite Russian President Vladimir Putin signing into law a measure to annex four Ukrainian regions into the Russian Federation, Kyiv's forces continue to push ahead with territorial gains in the south and east of Ukraine.

The chief of the International Atomic Energy Agency (IAEA) said he is traveling to Kyiv after Putin announced the seizure of Ukraine's largest nuclear power plant located in Zaporizhzhia. The seizure was included in a decree signed by Putin on Wednesday.

Here are more of the latest developments in Russia's war in Ukraine:

The Ukrainian military said that as its forces advance in the southern region of Kherson, Russian units have suffered losses and are trying to evacuate their wounded and equipment to the nearest crossings across the Dnipro River.

"In particular, the enemy moved up to 150 wounded servicemen and about 50 units of damaged military equipment to Vesele settlement, near Kakhovka hydroelectric power station," the General Staff said.

There is a heavily damaged bridge near the Kakhovka hydroelectric plant located in Nova Kakhovka. Ukrainian forces have been making progress down the west bank of the Dnipro.

Meanwhile in the northeast of the country, the Ukrainian military said the Russians have been taking heavy casualties in that area too, where Ukrainian forces are consolidating gains along the borders of Donetsk and Luhansk regions.

"Due to the large number of wounded and overload of local medical institutions, the enemy has equipped and is using a school as a military hospital. According to preliminary information, there are up to 200 wounded servicemen there," the General Staff said.

It also claimed that Russia was recruiting more men from penal colonies. "The command of the Russian occupation continues to recruit prisoners to replenish the losses of personnel. According to preliminary information, more than 650 prisoners from high-security penal colonies of Stavropol Krai agreed to take part in hostilities on the territory of Ukraine," it said.

The General Staff said that the Ukrainian air force had conducted more than 10 strikes against Russian concentration of weapons. "In addition, our air defense units shot down seven enemy UAVs. Six of them were Iranian-made."

The General Staff said Russian rocket attacks on a wide range of settlements had continued — in Donetsk, Dnipropetrovsk and Zaporizhzhia. But all enemy assaults had been repelled, the General Staff added.

In the occupied city of Enerhodar, "the occupiers continue to exert moral and psychological pressure on the employees of the Zaporizhzhia NPP [nuclear plant]," it said. "Employees are forced to obtain Russian passports and conclude employment contracts with the State Atomic Energy Corporation "Rosatom" under threat."

“On our way to Kyiv for important meetings. The need for a Nuclear Safety and Security Protection Zone (NSSPZ) around #Zaporizhzhya Nuclear Power Plant is now more urgent than ever,” Rafael Grossi, director general of the International Atomic Energy Agency (IAEA), tweeted.

Russian forces have controlled Zaporizhzhia nuclear power plant for months, and the area has seen heavy fighting in recent weeks.

Earlier on Wednesday, Putin signed a decree that puts the Zaporizhzhia nuclear power under Russian state control — and amends the country's constitution by admitting new regions into the Russian federation.

The confrontation over the status of the plant, and shelling that has damaged some installations there, has led the IAEA to intervene.