US Secretary of State Antony Blinken announced that the US is giving an additional $625 million in security assistance to Ukraine.

He cited Ukrainian forces effectively using US support to push ahead with their “successful counter-offensive to take back their lands seized illegally by Russia.”

“Pursuant to a delegation of authority from the President, I am authorizing our twenty-second drawdown of U.S. arms and equipment for Ukraine since August 2021. This $625 million drawdown includes additional arms, munitions, and equipment from U.S. Department of Defense inventories,” Blinken said in a statement. “This drawdown will bring the total U.S. military assistance for Ukraine to more than $17.5 billion since the beginning of this Administration.”

Blinken committed the US to continuing support for Ukraine for as long as it takes, saying US President Joe Biden has already made that promise.

“At the UN General Assembly, President Biden made it clear yet again that we will support the people of Ukraine for as long as it takes. Recent developments from Russia’s sham referenda and attempted annexation to new revelations of brutality against civilians in Ukrainian territory formerly controlled by Russia only strengthens our resolve,” Blinken said.

They also discussed a grain export agreement and “ongoing efforts of the United States to rally the world behind Ukraine’s efforts to defend its freedom and democracy, as enshrined in the United Nations Charter,” the readout said.

A map used by the Russian Defense Ministry in its daily briefing on Tuesday confirmed significant Russian losses in Ukraine’s Kherson region, compared to a map of the same region used during its briefing on Monday.

The map confirms reports from Ukrainian and pro-Russian officials, as well as pro-Russian military analysts, of significant Ukrainian advances towards the occupied city of Kherson, down the western bank of the Dnipro River.

Lt. Gen. Igor Konashenkov, who spoke while the map was shown full-screen, did not mention the losses. But he did say that the Russian military destroyed Ukrainian armor and killed Kyiv's forces in the area of several towns that are now understood to be under Ukrainian control – a tacit acknowledgement of Ukraine’s advance.

“We discussed the so-called referendums recently held by Russia on the temporarily occupied territories of our country with Prime Minister of India Narendra Modi,” Zelensky said. “We also talked about food and nuclear security, interaction within international organizations, first of all in the UN. It is important to strengthen Ukrainian-Indian partnership against the background of Russian aggression against Ukraine.”

“I am grateful to India for supporting the sovereignty and territorial integrity of our state. We appreciate the significant humanitarian assistance provided by the Indian government and private sector,” Zelensky added.

More on India-Russia relations: Modi has publicly clashed with Russian President Vladimir Putin over his war in Ukraine, telling Putin last month that “today's era is not of war.” But the reality, analysts say, is less straightforward.

Rather than cutting economic ties with the Kremlin, India has undermined Western sanctions by increasing its purchases of Russian oil, coal and fertilizer – giving Putin a vital financial lifeline.

New Delhi has repeatedly abstained from votes condemning Russia at the United Nations – providing Moscow with a veneer of international legitimacy. And in August, India participated in Russia’s large-scale Vostok military exercises alongside China, Belarus, Mongolia and Tajikistan – where Moscow paraded its vast arsenal.

The apparent contradiction exemplifies India’s position on the war: verbally distancing itself from Russia while continuing to maintain pivotal ties with Moscow.

Correspondents for Russian media are defending their dispatches on the performance of Russia's military in Ukraine as they report on Moscow's losses in the war.

“I’ve been told that I make people depressed with my news,” Alexander Kots from the pro-government tabloid Komsomolskaya Pravda wrote on Telegram. “Allegedly people need something positive. There won’t be any good news any time soon, the timing is wrong. Not from the Kherson frontline, not from the Luhansk one as it happens.”

Ukraine "is introducing well-prepared reserves, realizing its advantage in both personnel and intelligence data,” he said Tuesday, adding that Russia’s so-called "special military operation," meanwhile, is undergoing an “operational crisis.”

Kots, who was embedded with Russian troops in the Donetsk city of Lyman, wrote in the tabloid earlier this week that Russian forces suffered from lack of manpower, bad communications, and “mistakes” by commanding officers. Ukraine recaptured Lyman over the weekend.

“A certain tiredness crept in in many areas after a long attacking season during which we liberated large swathes of land. We didn’t have enough strength left after that to hold on to them,” he said. “Why so? Because we simply don’t have enough people. Although it might have looked different at some point. We needed this sucker punch to understand how things stand in real terms. That’s why they announced the partial mobilization.”

Kots reassured his followers that he saw neither “panic nor arrogance” among the Russian forces. Besides Kots, Russia 24's Evgeniy Poddubnyy is also writing similar reports.

Poddubnyy said Tuesday that “we’re going through the hardest time on the frontline” and that “for the time being it will become even harder.”

Ukraine's forces have continued their eastern counteroffensive and pushed into the Luhansk region, pro-Russian officials said, after recapturing the key city of Lyman in the Donetsk region over the weekend.

Despite not being in full control of the areas, the three regions are territories Russia has claimed it is annexing in violation of international law.

Here's how the state of control on Ukrainian territory looks right now: 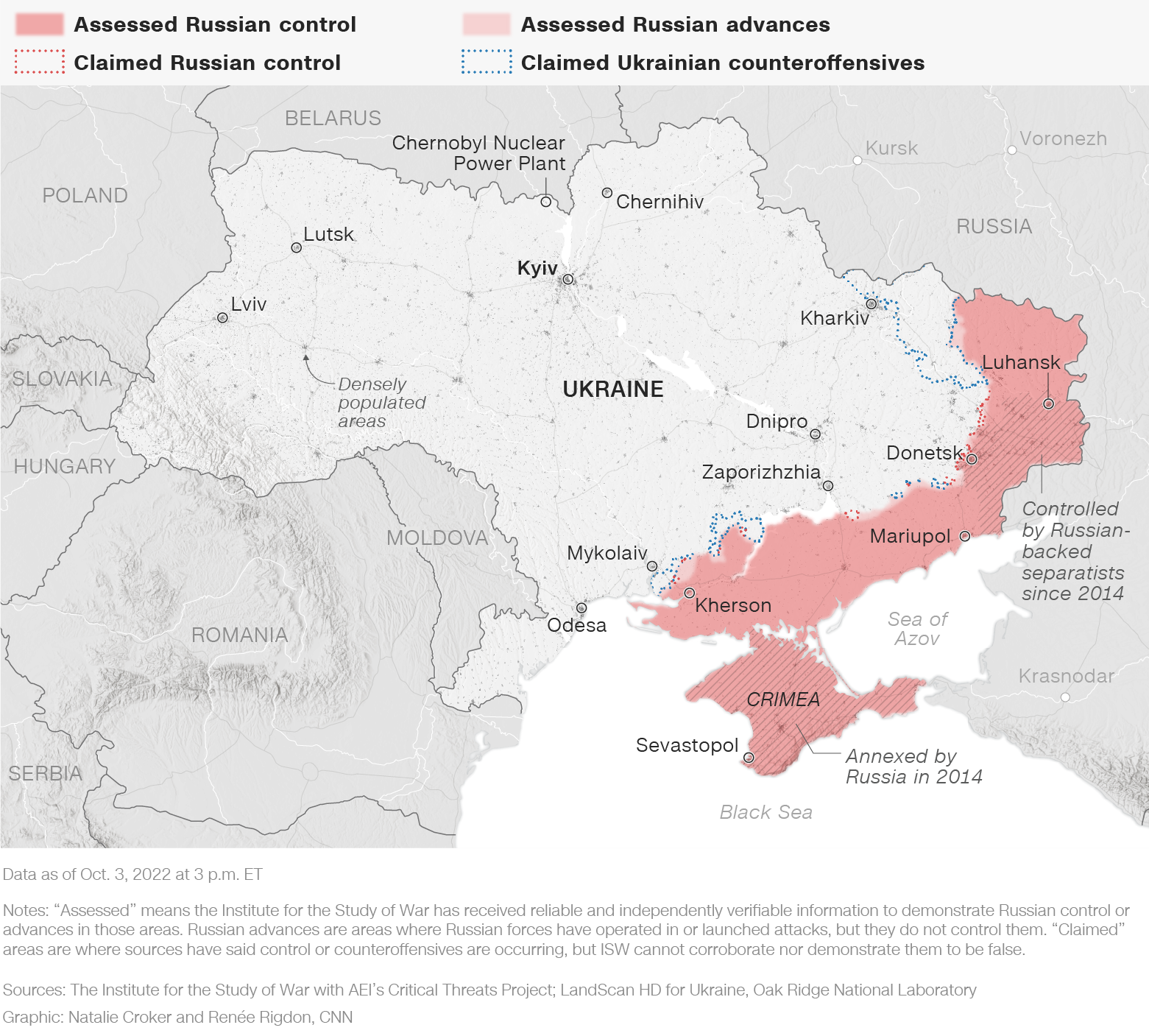 The US is set to announce another $625 million aid package to Ukraine, which will include four more High Mobility Artillery Rocket System (HIMARS) as well as more howitzers and ammunition, according to a senior defense official.

The package, which falls under a Presidential Drawdown Authority and will be pulled directly from US stocks, also includes 16 155mm howitzers and 16 105mm howitzers along with the associated ammunition, the official said.

This package will give Ukraine a total of 20 HIMARS systems, which the Ukrainian military has used to great effect against Russian forces. The Ukrainians have used the Guided Multiple Launch Rocket System (GMLRS) munition, fired from the HIMARS vehicle, to carry out precision strikes against Russian logistics hubs, command posts, ammunition depots and more.

This aid package was first reported by Reuters.

More context: Last week, the US announced a $1.1 billion security package under the Ukraine Security Assistance Initiative (USAI), which included another 18 HIMARS. The tranche of HIMARS in this package will be contracted from weapons manufacturers and will take longer to produce and deliver, but it is intended for Ukraine’s defense in the medium- and long-term.

With the latest $625 million package, the US will have committed more than $16.8 billion in aid to Ukraine since the beginning of Russia’s invasion on Feb. 24.

“The Ukrainian marines are confidently advancing towards the Black Sea,” the defense ministry said on Twitter.

Yurii Sobolevskyi, the deputy head of Kherson regional council, confirmed the liberation of the town of Velyka Oleksandrivka on Telegram.

The announcements come as pro-Russian officials and analysts, as well as Ukrainian officials, say that Ukrainian forces are making significant advances towards the occupied city of Kherson, along the Western bank of the Dnipro river.

Kherson is one of the four partially-occupied territories that Russia claimed it is annexing in violation of international law.

The Ukrainian Armed Forces captured Lyman over the weekend — one of its biggest achievements for weeks and a setback for Moscow. Lyman is in the Donetsk region, one of the four partially-occupied territories Russia declared on Friday it would annex.

Russia’s troops had withdrawn from the city in the face of the “threat of encirclement," the Russia's Ministry of Defense in Moscow confirmed on Telegram. By Sunday, Ukrainian President Volodymyr Zelensky declared Lyman was “completely liberated” of Russian troops.

Lyman was a logistical hub for the Russian army, who had used it to funnel troops and supplies to the west and south.

“Lyman sits astride the supply lines of the Russians. And they've used those routes to push men and material down to the south and to the west. And without those routes it will be more difficult," he said.

Lyman could now become a staging post for the Ukrainian troops to push further east.

Since retaking the city, Ukrainian forces have moved into the neighboring Luhansk region, pro-Russian officials and propagandists alleged on Monday. “The Armed Forces of Ukraine managed to cross the administrative border of the LPR and gain a foothold in the direction of the settlement of Lysychansk,” Andrey Marochko, a military leader in the self-proclaimed Luhansk People’s Republic (LPR), wrote on Telegram.

Kyiv’s next target may be the town of Kreminna, about 24 kilometers (15 miles) east of Lyman.

Yuriy Podolyaka, a pro-Russian journalist, military blogger and analyst, wrote on Telegram Monday that he expected “a new offensive” in that direction to “begin any day [now]."