Ukrainian forces liberated the village of Torske near Lyman in the Donetsk region on Sunday, as they inch closer to taking back the Luhansk region, according to the Ukrainian military.

Serhiy Cherevaty, spokesman for the Eastern Group of the Armed Forces of Ukraine, said on national television that Ukrainian forces are hitting Russian military units in Luhansk’s city of Kreminna “with fire.”

"For them (Russian occupiers), it is now very important to keep Kreminna. After overcoming Kreminna, the Armed Forces of Ukraine will go to Svatovo, Rubizhne, and further on they will be able to liberate the Luhansk region,” Cherevaty said, adding they would also be able to take back Severodonetsk and Lysychansk should they win back control of Kreminna.

Zelensky hails advances: Ukraine's latest gains come after the key Donetsk city of Lyman was liberated by Ukrainian forces at the weekend.

However, Ukrainian President Volodymyr Zelensky said Sunday that Ukraine's military successes were not limited to Lyman. In his nightly address to the nation, Zelensky said a substantial part of the war reports he receives are taken up with a growing list of recently liberated Ukrainian settlements.

“At least twice a day — in the morning and in the evening — I receive reports from our military. This week, the largest part of the reports is the list of settlements liberated from the enemy as part of our defense operation," Zelensky said. “The story of the liberation of Lyman in Donetsk region has now become the most popular in the media. But the successes of our soldiers are not limited to Lyman.”

Zelensky also praised the liberation of Arkhanhelske and Myroliubivka settlements in Kherson region by soldiers of Ukraine's 129th brigade.

The ghostly emptiness of the streets of Lyman in eastern Ukraine belies this city’s strategic significance.

There are no signs of Russian troops at all on Sunday — few damaged Russian tanks, or Russian dead, or Russian prisoners. Members of the Ukrainian National Guard from the Dnipro-1 unit hover in small numbers on some streets.

The occasional rattle of gunfire, or thud of artillery, pierces the silence. A few locals emerge, riding bicycles, searching for food, bewildered about what is happening.

“One day I wear one cap, another day a different cap,” said one woman in tears, pretending to take off a hat.

“How can we live like this,” she said, referring to the changing control of the city.

Ukrainian officials and troops had spoken repeatedly of large numbers of Moscow’s better units being trapped there. Yet on Sunday there were few signs of encirclement to be seen.

Some officials said Russian corpses had already been cleared away and prisoners removed. But locals offered another explanation: that Russian forces had left the city on Friday in an orderly fashion.

“They got on their tanks, and drove out,” said Tanya, riding her bicycle back to the bomb shelter, where she still spends the nights with 15 others.

The presidents of nine NATO countries from Central and Eastern Europe issued a joint statement Sunday supporting Ukraine's bid for membership of the defense alliance as they called for increased military aid to Kyiv.

The presidents of the Czech Republic, Estonia, Latvia, Lithuania, North Macedonia, Montenegro, Poland, Slovakia and Romania expressed their firm support for "the decision of the 2008 Bucharest NATO Summit regarding the future membership of Ukraine in the Alliance."

“We support Ukraine in its defence against Russia's invasion, demand Russia to immediately withdraw from all the occupied territories and encourage all Allies to substantially increase their military aid to Ukraine,” the statement added.

The statement noted that the leaders of these countries — which account for nearly a third of NATO's members — “visited Kyiv during the war and witnessed with their own eyes the effects of Russian aggression.”

“We reiterate our support for the sovereignty and territorial integrity of Ukraine. We do not recognize and will never recognize Russian attempts to annex any Ukrainian territory,” the statement said.

The statement also called on “all those who commit crimes of aggression” to be brought to justice.

Some context: A decision about Ukraine’s application for accelerated NATO membership must be agreed upon by all 30 members of the alliance, Jens Stoltenberg, NATO secretary general, said Sunday.

Ukrainian President Volodymyr Zelensky announced Friday that Ukraine was applying “under an accelerated procedure” to become a NATO member.

US Secretary of Defense Lloyd Austin said he believes Ukraine is “making progress,” in the Kherson region of the country as they continue to counter Russia’s invasion, adding there has been a “kind of change in the battlefield dynamics.”

Austin attributed the change to the skill of Ukrainian soldiers and their strategic use of weapons supplied by US and NATO allies, specifically their use of the high mobility air rocket systems, or HIMARS. He made the comments in an exclusive interview with CNN’s Fareed Zakaria that aired Sunday on “Fareed Zakaria GPS.”

“What we’re seeing now is a kind of change in the battlefield dynamics,” Austin said. “They’ve done very, very well in the Kharkiv area and moved to take advantage of opportunities. The fight in the — the Kherson region’s going a bit slower, but they’re making progress.”

Austin said Ukrainian forces have used “technology like HIMARS” and employed it in the “right way” to “conduct attacks on things like logistical stores and command and control, that’s taking away — taken away significant capability from the Russians.”

In doing so, Ukrainians have “changed the dynamics, and it’s created an opportunity for the Ukrainians to maneuver,” he added.

When asked why the US has not supplied longer-range weapons that Ukrainians have asked for, Austin said he communicates with his Ukrainian counterpart, Minister of Defense Oleksii Reznikov, “routinely,” and believes the US has been “very effective in providing them those things that are very, very effective on a battlefield.”

Russian officials have criticized their military leadership following the retreat of Moscow's forces from the strategic eastern city of Lyman, in the Donetsk region, underlining concerns the Kremlin could be eyeing nuclear weapons on the battlefield.

A Russian lawmaker and former army commander on Saturday told pro-Kremlin digital outlet Soloviev Live that he could not explain this “surrender” from a military point of view.

“It is not clear to me why they didn’t correctly assess the situation at that time, didn’t strengthen the group of troops,” State Duma deputy and former commander of the 58th Army, Lt. Gen. Andrei Gurulev said.
“This is probably a significant milestone not only military, but also political, especially now,” he said, adding “the problem is the general lies, the report of a good situation. This system goes from top to bottom.”

Using the Russian name for Lyman, the Russian Defense Ministry said Saturday that “troops were withdrawn from the settlement of Krasny Liman to more advantageous lines.”

Russian state media Russia-24 reported that Russia’s withdrawal was because “the enemy used both Western-made artillery and intelligence from North Atlantic alliance countries.”

The retreat marks Ukraine’s most significant gain since its successful counteroffensive in the northeastern Kharkiv region last month.

Time is running out for Russian President Vladimir Putin, and he knows it.

Meanwhile his bombast continues: announcing the annexation of Ukrainian territories on Friday, Putin declared Luhansk, Donetsk, Zaporizhzhia and Kherson will become part of Russia “forever.” He is rushing to claim a victory and cement slender gains and sue for peace, running a dangerous political tab, regardless of the fanfare in Moscow.

He called on Ukraine to “cease fire” immediately and “sit down at the negotiating table,” but added: “We will not negotiate the choice of the people. It has been made. Russia will not betray it.”

He is doing his best to hide it, but he is losing his war in Ukraine. The writing is on the wall.

Andrey Kortunov, who runs the Kremlin-backed Russian International Affairs Council in Moscow, sees it, too. “President Putin wants to end this whole thing as fast as possible,” he told CNN.

Putin’s recent heavy-handed conscription drive for 300,000 troops won’t reverse his battlefield losses any time soon, and is backfiring at home, running him up a dangerous political tab. 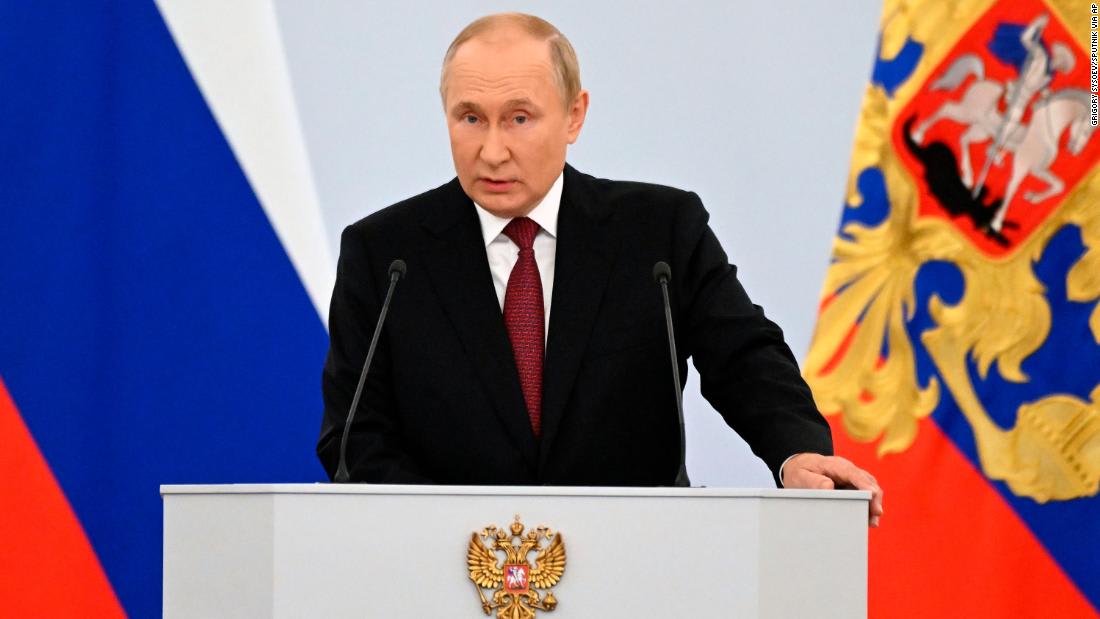 Analysis: Putin has his back to the wall with the clock ticking ever louder