US Secretary of State Antony Blinken spoke with Ukrainian Foreign Minister Dmytro Kuleba on Friday, emphasizing that the US would continue providing economic and security support for Kyiv, according to a State Department readout.

Blinken told the foreign leader that assistance would persist "in the run-up to, and beyond, the first anniversary in February of Russia’s unprovoked full-scale invasion of Ukraine,” the readout said.

“The Secretary emphasized the United States’ enduring and unflinching support for Ukraine, as underscored by recent provisions of advanced air defense equipment and armored vehicles from U.S. stocks,” according to the readout.

Kuleba shared a message of thanks on Twitter after the call, saying he was grateful to the US for standing with Ukraine. The foreign minister said he emphasized the need for "Western-type tanks" in future aid packages.

The leaders' call comes as Russia claims to have captured the eastern Ukrainian city of Soledar. Kyiv denies the claim.

"We need to keep increasing the pressure on Russia and we will continue, of course, our unwavering support for Ukraine," she said in a joint news conference with Swedish Prime Minister Ulf Kristersson in Kiruna, Sweden.

“It is now 10 months since the start of the atrocious Russian war against Ukraine. The Ukrainians are fighting with the same ardor as on day one, and we are supporting them as firmly as on day one and as long as it takes,” she said.

At the start of Sweden's six-month presidency of the European Union, von der Leyen said that while Russia had cut 80% of gas supplies to the EU since the start of conflict in Ukraine, the EU had compensated by diversifying.

“Without any question, before the war, we were too dependent on Russian fossil fuels. And Russia has exploited this dependency and weaponized energy,” she said.

"Russia tried to blackmail us, but failed thanks to our unity,” she added.

“This hard work paid off. Gas prices today are now lower than they were before Russia's invasion," von der Leyen said.

Wagner chief Yevgeny Prigozhin has posted a thinly veiled retort toward the Russian Defense Ministry about the claimed capture of Soledar.

His remarks highlight, once again, the rift between Prigozhin and the defense ministry.

In a post on Telegram, the head of the Russian mercenary group said that while the United States is “a serious adversary, at the moment it is not a key one” — instead, the Russian Defense Ministry is.

Prigozhin added that “significant damage to PMC Wagner can be caused by our intraspecific struggle, corruption, bureaucracy and officials who want to stay in their places. This is a more serious threat to PMC Wagner.”

A Ukrainian official denied Russia had taken the town, saying fighting was ongoing. A Ukrainian soldier stationed in the eastern city of Bakhmut told CNN that Ukrainian units are still at the edges of Soledar.

Some background: CNN has previously reported about the rift that has opened up between Prigozhin — dubbed "Putin's chef" — and Russian Defense Minister Sergei Shoigu.

In a series of recent videos, Prigozhin said, “once we conquer our internal bureaucracy and corruption, then we will conquer the Ukrainians and NATO … The problem now is that the bureaucrats and those engaging in corruption won’t listen to us now because for New Year’s they are all drinking champagne.”

In his Friday Telegram post, Prigozhin said that “they constantly steal victory from Wagner PMC and talk about the presence of someone who is not clear, just to belittle their merits.” This appears to be another dig at the lack of acknowledgement of the fighting Wagner units have been doing around and in Soledar.

On Friday, the Russian Ministry of Defence announced that Russia had taken the town, but did not mention the work of Wagner units in the town. In recent days, Prigozhin has gone out of his way to make it clear that Wagner are “exclusively” fighting in the city.

What Ukraine says: A top Ukrainian official on Friday characterized infighting among different factions of the Russian power establishment as a “sign of the beginning of the stunning end.”

Mykhailo Podolyak, an adviser to the Head of the Office of President of Ukraine, said on Twitter that the “public rumble” among the Russian Defense Ministry, Progozhin and General Sergei Surovikin “about who is fighting better on the 11th month of the 3-day war & who will sow Soledar with their corpses the most.”

“A good sign of the beginning of the stunning end!” he said.

Surovikin was replaced as head of Russia's so-called "special military operation" in Ukraine on Wednesday.

A Ukrainian soldier stationed in the eastern city of Bakhmut has told CNN that Ukrainian units are still at the edges of the nearby town of Soledar, which has been under intense attack by Russian forces for several weeks.

Taras Berezovets, a captain in the Ukrainian Special Forces First Brigade, said remaining in Soledar made no military sense, because it was "completely destroyed." He said he believed a decision to withdraw may be made in the coming days but said it would be up to the General Staff to make any such decision. He added that morale among frontline units was high.

Berezovets said units see their mission as holding on as long as possible and killing as many Wagner fighters as possible.

Wagner fighters, who are part of a mercenary group and not the regular Russian armed forces, have been prominent in the ground assault against Soledar. He said much of the fighting over the last two weeks had involved street fighting in Soledar between small units of four to eight fighters.

Withdrawing from Soledar would not affect the ability of Ukrainian forces to resupply Bakhmut, which is a few kilometers to the southwest, Berezovets believed, adding that two major roads into Bakhmut remained firmly in Ukrainian hands, and Ukrainian fighter jets had been attacking Russian positions near Bakhmut during Friday.

Russia said Friday its forces had captured Soledar, a salt mine town in eastern Ukraine, in what would represent a symbolic if not strategic victory for Moscow after months of setbacks on the battlefield. However, Kyiv refuted the claim.

Taking Soledar would also represent a symbolic PR win for the man who runs Wagner – oligarch Yevgeny Prigozhin, who has frequently criticized the Russian Defense Ministry’s management of the “Special Military Operation” in Ukraine.

Where is Soledar: The small lies at the center of the Donbas region, the vast expanse of eastern Ukraine whose capture Russia has prized above all other regions since last summer. Indeed, Moscow regards it as Russian territory since claiming (illegally) that it had annexed all of Donetsk region – including the approximately 40% that lies outside Russian control.

It is just a few miles northeast of the larger city of Bakhmut, which has become perhaps the most contested and kinetic part of the 1,300-kilometer (800 mile) front line in Ukraine and the scene of some of the fiercest fighting of the war. 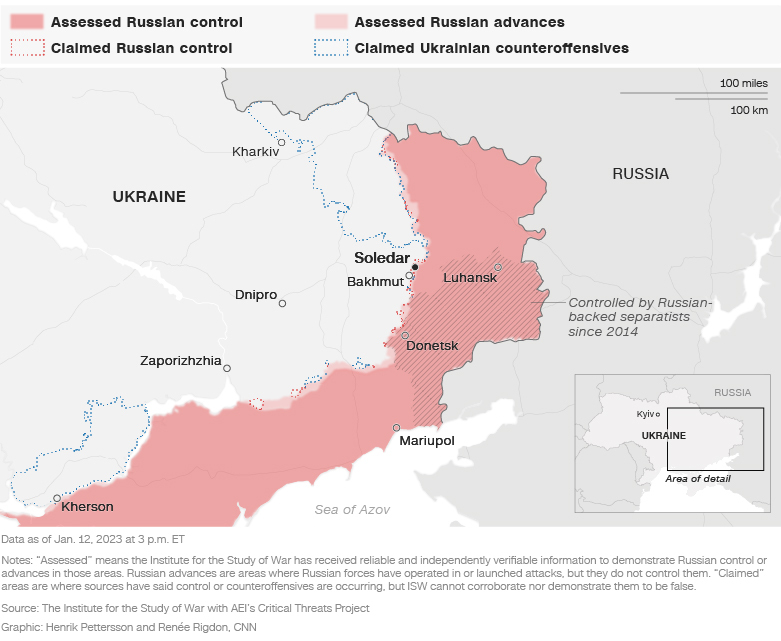 Why has Soledar been a target? With a pre-war population of about 10,000, it has little strategic value in itself, but is a waypoint in the Russians’ attritional slog westwards. Moscow has struggled for months to attack Bakhmut from the east, but were it to capture Soledar, Moscow would at least be able to approach the city from a different path.

An eye on salt mines: The area around Soledar includes large salt mines, which belong to state enterprise Artemsil, the biggest producer of salt in Europe, which halted production shortly after Russia’s invasion last February. The area surrounding the town hosts “extensive reserves of very pure salt that have only been exploited on an industrial scale since 1881,” according to the European Route of Industrial Heritage.

Some have speculated that the Russians – and Wagner’s leader Prigozhin – have eyed Soledar for its huge resources of gypsum. Prigozhin has used Wagner in Africa and Syria as a mercenary force to leverage access to resources including diamonds and oil.

But exploiting Soledar’s famed salt mines would require heavy investment and a more tranquil environment than at present. Prigozhin has said the vast network of tunnels created by the mining offers “unique and historic defenses,” and a “network of underground cities.”

A win for Russia after a long time: The Russian armed forces have had nothing to celebrate since the beginning of July, and have had to retreat in both Kharkiv to the north and Kherson in southern Ukraine. The capture of Soledar, despite its now-ruined state, would therefore be rare progress. But it would be symbolic rather than substantive.

"Today, there are 249 people in three temporary accommodation centers in the city of Shakhtyorsk and the Shakhtyorsk district. About 120 people who live here are from previously liberated settlements, and yesterday another 100 people arrived from the city of Soledar," said Shatov in a comment to the Russian state news agency RIA Novosti.

People are provided with food and personal hygiene products, according to Shatov. "It is expected that about 110 more people will arrive today [Friday.]"

Remember: On Friday, the Russian defense ministry has said that it has captured the contested town of Soledar in Eastern Ukraine on the evening of Jan. 12. Ukraine refuted this claim.

Russia's ministry of defense has claimed that its forces have taken the town of Soledar in eastern Ukraine, in what would be their first battlefield victory in months. Ukraine has denied the claim.

Elsewhere, France has promised to deliver AMX 10-RC light battle tanks to Kyiv within two months, as pressure grows on other Western countries to provide tanks to Ukraine.

Neither Poland nor Finland have submitted an official request to re-export their German-made Leopard battle tanks to Ukraine, a German government spokeswoman said Friday, as pressure mounts on Berlin to provide the tanks to Kyiv and to authorize other countries to do the same.

On Wednesday, Polish President Andrzej Duda pledged to send some of the country's Leopard tanks to Ukraine during a meeting with Ukrainian counterpart Volodymyr Zelensky.

And on Thursday, Finnish President Sauli Niinisto said his country could send a limited number of the tanks to Ukraine if a group of nations decides to do so, reports Reuters.

Thirteen European countries are in possession of German Leopard 2 tanks, which were introduced in 1979 and have been upgraded several times since, according to the European Council on Foreign Relations think tank. Any re-export of the tank by these countries would typically need approval from the German government.

"There is no question to which we would have to say no. But we're saying right now that we are in a constant exchange about what is the right thing to do at this point in time and how we best support Ukraine," German government spokeswoman Christiane Hoffmann told reporters at a regular news conference in Berlin on Friday.

Germany is ''in a very close exchange with the United States, France and Great Britain -- but also with Poland and Spain,'' about ongoing military assistance for Ukraine, added Hoffmann.

And the government said it was not concerned about reports that Poland is planning to deliver Leopard battle tanks to Ukraine without its permission, which would be in violation of re-export rules.

"That's not something that we're concerned about or that we fear," she said. "I don't think that's a realistic assumption."

Moscow's claims that its forces have taken the town of Soledar in eastern Ukraine are "not true," according to a Ukrainian official.

Serhiy Cherevaty, spokesman for the Eastern Group of the Armed Forces of Ukraine, told Ukrainian outlet RBC-Ukraine that "fighting is going on in the city."

Russia's defense ministry said Friday that its forces had taken the town, in what would represent a symbolic if not strategic victory for Moscow.

Capturing Soledar would allow Russian forces, and especially the Wagner mercenary group, to turn their focus on nearby Bakhmut, which has been a target since the summer.