We've wrapped up our live coverage for today. Find CNN's latest stories on the Russian invasion here, or scroll through the updates below to read more.

Zelensky claimed that the Russian government does not care who will be mobilized, be it "a young IT specialist who did not serve at all, or pensioners who served only in the Soviet army."

He called on drafted Russian fighters to surrender and said his country's forces would treat them with civility.

“It is better not to take a conscription letter than to die in a foreign land as a war criminal,” Zelensky continued. “It is better to run away from criminal mobilization than to be crippled and then bear responsibility in the court for participating in the war of aggression.”

Some context: Russia's move to call on some 300,000 reservists comes in the wake of Ukraine's successful counteroffensive this month and led to anti-war protests in the country.

Activists have raised concerns about ethnic minorities being disproportionately mobilized, and in one region, local officials say Russia mistakenly drafted people who were supposed to be protected from conscription.

“They are not even ashamed to talk about inflicting military defeats on our country but also destroying and dismembering Russia; in other words, to make this independent geopolitical unit disappear from the world’s political map,” Lavrov said.

Lavrov also brought up other global conflicts that the US has been involved in, using an oft-used whataboutism tactic that US officials view as designed to distract and undermine.

“We all remember how under false pretexts the aggressive wars were unleashed against Yugoslavia, Iraq, Libya, far from the American shores, which claimed many hundreds of thousands of lives of civilians,’’ he said. “Did any of these countries affect the legitimate interests of the West? Did they ban English or the languages of other NATO member countries, did they ban Western media, culture? Did they declare the Anglo-Saxons 'subhuman,' used heavy weapons against them?"

Lavrov asked the participants of the General Assembly “to name a country in whose affairs Washington intervened and where life has become better as a result.”

He claimed Ukraine is “expandable material” in the fight of the West against Russia. He falsely claimed that “the incapacity of Western countries to negotiate and the continued war by the Kyiv regime against their own people left us with no choice” but to recognize two separatist regions of Ukraine as independent and then to send troops in.

On Thursday, Lavrov was absent from the UN Security Council meeting on Ukraine for all but his own remarks, in which he dismissed the widespread international condemnation and again blamed Kyiv for Moscow’s invasion. Several officials suggested the top Russian diplomat left the room because he did not want to hear the condemnations.

Alexander John-Robert Drueke, one of the Americans released in a prisoner swap between Ukraine and Russia, said he is "very happy" to be home after landing at Birmingham International Airport in Alabama.

Drueke and fellow US POW Andy Tai Ngoc Huynh were freed Wednesday and returned to the US Friday after being captured by Russia while fighting in Ukraine.

As they reunited with family and friends, Drueke hugged his aunt, Dianna Shaw, while Huynh hugged his fiancée's mother, Darla Black.

Drueke, 39, is from Tuscaloosa, Alabama, and Huynh, 27, is from Hartselle, Alabama.

Asked if he was glad to be back, Drueke responded, "I'm very happy, thank you."

Shaw also said that Huynh wanted "a particular fast food" — McDonald's — on his return, and he got a meal this morning in Atlanta. "He was very, very happy," she added with a laugh.

More background: The two men initially disappeared in June while fighting Russian forces with Ukraine. Their pro-Russian captors, the self-declared Donetsk People's Republic, has governed a breakaway portion of Ukraine's Donetsk region since 2014.

Even after being captured, their families say the men have no regrets about going over to fight with the Ukrainians.

Five British citizens who were held by Russian-backed forces for months were also released as part of the prisoner swap, which was brokered by Saudi Arabia. And three prisoners who are Moroccan, Swedish and Croatian nationals were released in the swap, the Saudi Ministry of Foreign Affairs said.

Putin signed a law Saturday that would make it easier for foreigners serving in the Russian military to apply for citizenship.

According to the law, which was published on the official state portal of legal information, foreigners serving in the Russian military can now apply for citizenship without presenting a residence permit, as previously required.

Those foreigners who have signed a contract with the Russian Armed Forces for at least a year will be eligible for the procedure, according to the amendments, made to the law "On Citizenship of the Russian Federation."

The move comes after Putin announced a "partial mobilization" this week, as Moscow seeks to replenish depleted forces after a successful counteroffensive from Kyiv. The move is set to change the scope of Russia’s invasion from an offensive fought largely by volunteers to one that embroils a larger swath of its population.

The announcement unleashed a scramble for some Russians, with social media chatter on platforms like Telegram exploding with people frantically trying to figure out how to get seats in vehicles headed to the borders, with some even discussing going on bicycle. 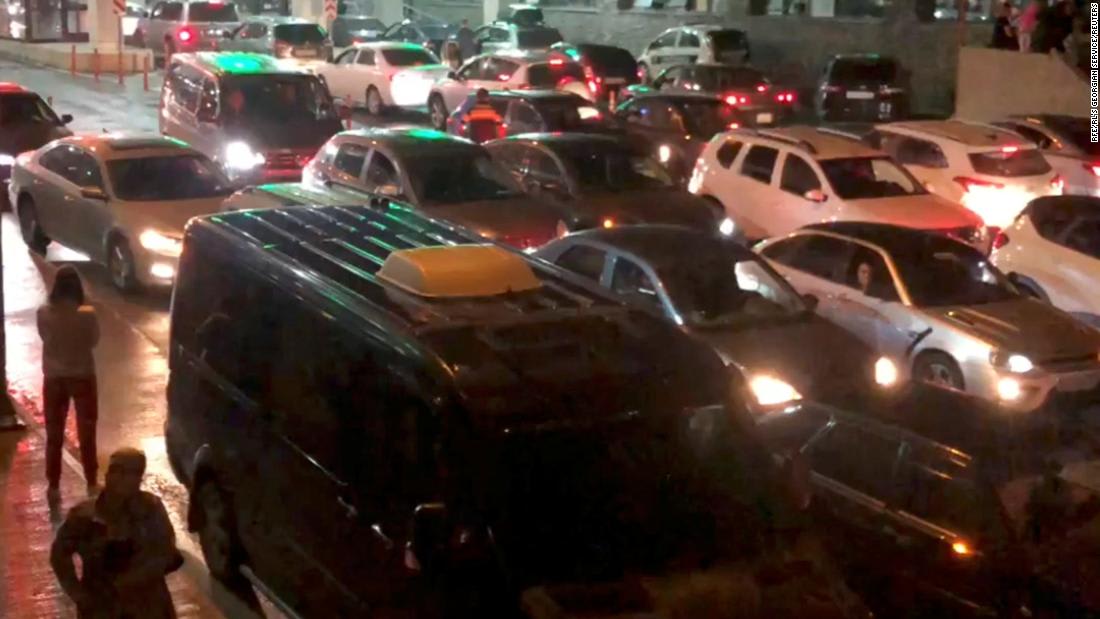 Under the amendments, published Saturday on the government's legal portal, crimes such as refusing to follow the orders of a senior officer during wartime, during an armed conflict or combat operations — or the refusal to participate in military or combat operations during such times — may result in jail terms of up to 10 years.

The punishment for those sentenced to imprisonment for committing especially grave crimes can now be replaced by forced labor or another milder type of punishment only after at least two-thirds of the imprisonment term has been served, the Kremlin statement said.

The Russian president also signed a law that would punish the violation of the terms of a state contract in the field of state defense, especially if such violation caused damage to the state in the amount of at least 5% of the contract price and at least 5 million rubles (about $86,000), as well as failure to fulfill the contract.

Exemption from punishment is possible "if violations are voluntarily eliminated," the Kremlin statement says.

Some context: In the wake of Ukraine's successful counteroffensive this month, Putin and Russian authorities have taken a series of steps to bolster the country's military and clamp down on dissent at home.

Some 300,000 reservists have been called into military service in what Putin terms a "partial mobilization."

Nearly 1,500 anti-war protesters have been detained in cities across Russia since the announcement, with some directly conscripted into the military, according to a monitoring group. The punishment in Russia for refusing the draft is now 15 years in jail.

Russia has replaced its deputy defense minister by appointing Col. Gen. Mikhail Mizintsev for the post, the Russian Defense Ministry said in a statement published Saturday.

"Colonel-General Mikhail Mizintsev has been appointed to the post of Deputy Minister of Defense of the Russian Federation, responsible for the logistics of the Armed Forces," according to the statement.

Mizintsev replaces the General of the Army Dmitry Bulgakov, who was relieved of his post due to a transfer to another job, according to the statement.

The Ukrainian military has said Mizintsev led the siege of the eastern Ukrainian port city of Mariupol.

Some residents of a Russian republic were called to military service this week despite not being eligible for mobilization, such as fathers of underage children, a local official said.

Aisen Nikolaev, the head of the Sakha Republic, shared the news in a Telegram post on Saturday.

"All who were mobilized by mistake must be returned back. This work has already begun," said Nikolaev, following a meeting on President Vladimir Putin's plan to call on some 300,000 reservists to join the country's invasion of Ukraine.

Nikolaev said authorities will support families of those who have begun military service and will issue them a one-time payment of 200,000 rubles (about $3,430). The families will also be exempt from fees in kindergartens.

Activist groups, such as Free Buryatia Foundation, have said ethnic minorities in Russia are being disproportionately mobilized. CNN has geolocated videos of some of these men being mobilized in Russia's Far East regions.

A lawmaker from Russia's main ruling political party United Russia, which backs President Vladimir Putin, has filed an application to be sent to fight in the "special military operation" — what Russia calls its war in Ukraine — the party's press service said Saturday in a statement.

Oleg Kolesnikov, a member of the State Duma Committee for the Protection of Competition, said he has military experience and is a reserve major, according to the statement.

“I served in the Soviet army in Poland. I was the commander of a self-propelled artillery gun. I graduated with the rank of Foreman, now a reserve Major. And I must do my duty,” he said.

The​ applications will be considered by the Ministry of Defense of the Russian Federation, the party said.

"Several regional and municipal deputies of United Russia are going to join the special military operation, many of them decided to volunteer," the statement said.

Some background: The announcement comes as protesters demonstrated in cities across Russia against Putin's declaration of "partial mobilization" this week to support the war in Ukraine. Some detained protesters were directly conscripted into the military, according to a monitoring group.

Experts say Russia’s forces have been significantly depleted. The announcement would see 300,000 reservists called up, according to Defense Minister Sergei Shoigu.

In an early sign of how seriously Moscow is ramping up its efforts, the Human Rights Council of Russia has proposed that immigrants from central Asian countries who have had Russian citizenship for less than 10 years will undergo compulsory military service in Russia for a year.