State Department principal deputy spokesperson Vedant Patel confirmed that the US believes Russia has received unmanned aerial vehicles (UAVs) from Iran and “intends to use these Iranian UAVs, which can conduct air to surface attacks, electronic warfare, and targeting on the battlefield in Ukraine.”

“The Russian military is suffering from major supply shortages in Ukraine in part because of sanctions and export controls, forcing Russia to rely on unreliable countries like Iran for supplies and equipment,” Patel said during a phone briefing Tuesday. “We'll continue to vigorously enforce all US sanctions on both the Russian and Iranian arms trade and we will stand with our partners throughout the region against the Iranian threat.”

CNN’s Natasha Bertrand reported Monday evening that the US assessed that Russia was in possession of the UAVs.

“Preparations for the sham referenda are being led by the first deputy head of Russia's presidential administration, Sergey Kiriyenko,” Patel said during a phone briefing.
“Kiriyenko is responsible for overseeing the Russia-held territories in advance of their attempted incorporation into Russia, which would be illegal if completed.”

Kiriyenko was sanctioned in March 2021 and February 2022 — two days before the Russian war in Ukraine began — in response to Russian President Vladimir Putin’s decision to recognize the so-called Donetsk and Luhansk People’s Republics as “independent.”

Russian referenda: Patel reiterated that the US assesses that Russia could hold sham referenda in Kherson, Zaporizhzhia, the so-called Donetsk and Luhansk People’s Republics, and parts of Kharkiv. They “could take place in the coming weeks,” he said.

“We expect Russia to manipulate the results of these referenda in order to falsely claim that the Ukrainian people want to join Russia,” he said.

“As part of the sham referenda, Russia will undoubtedly employ propaganda and disinformation campaigns, falsify voter turnout and exaggerate the percentage of those who supposedly voted in favor of joining Russia," he said. “We want to be clear any claim by the Kremlin that the Ukrainian people somehow want to join Russia is a lie. Polling shows that just 3% of Ukrainians say that they would like Ukraine to be a member of the Russia-led Eurasian Customs Union.”

As Ukraine ramps up its offensive to retake Russian-occupied territory in the country's south, its forces have regained four villages and broken through Russian defenses at multiple points of the front line in the Kherson region, according to Ukrainian officials.

Ukraine's President Volodymyr Zelensky also issued a warning to Russian forces during his evening address Monday, saying it was time for them to "run away, go home," and that "the occupiers must know we will chase them to the border."

Yet one of his advisers cautioned that the operation will be a slow one, that would "grind the enemy."

"This process will not be very fast," Oleksiy Arestovych, adviser to the head of the office of the President of Ukraine, said in a statement posted on Telegram late Monday, "but will end with the installation of the Ukrainian flag over all the settlements of Ukraine."

"[The Ukrainian Armed Forces] have broken through the front line in several sectors," Arestovych said in a video interview posted on YouTube, adding that Ukrainian forces were shelling ferry crossing points that Moscow is using to resupply Russian-occupied territory over the Dnipro River in the Kherson region.

"We suppress their attempts to supply their groups on the west bank [of the Dnipro]," he said. "We strike at reserves, including reserves that are on the east bank and are trying to cross." 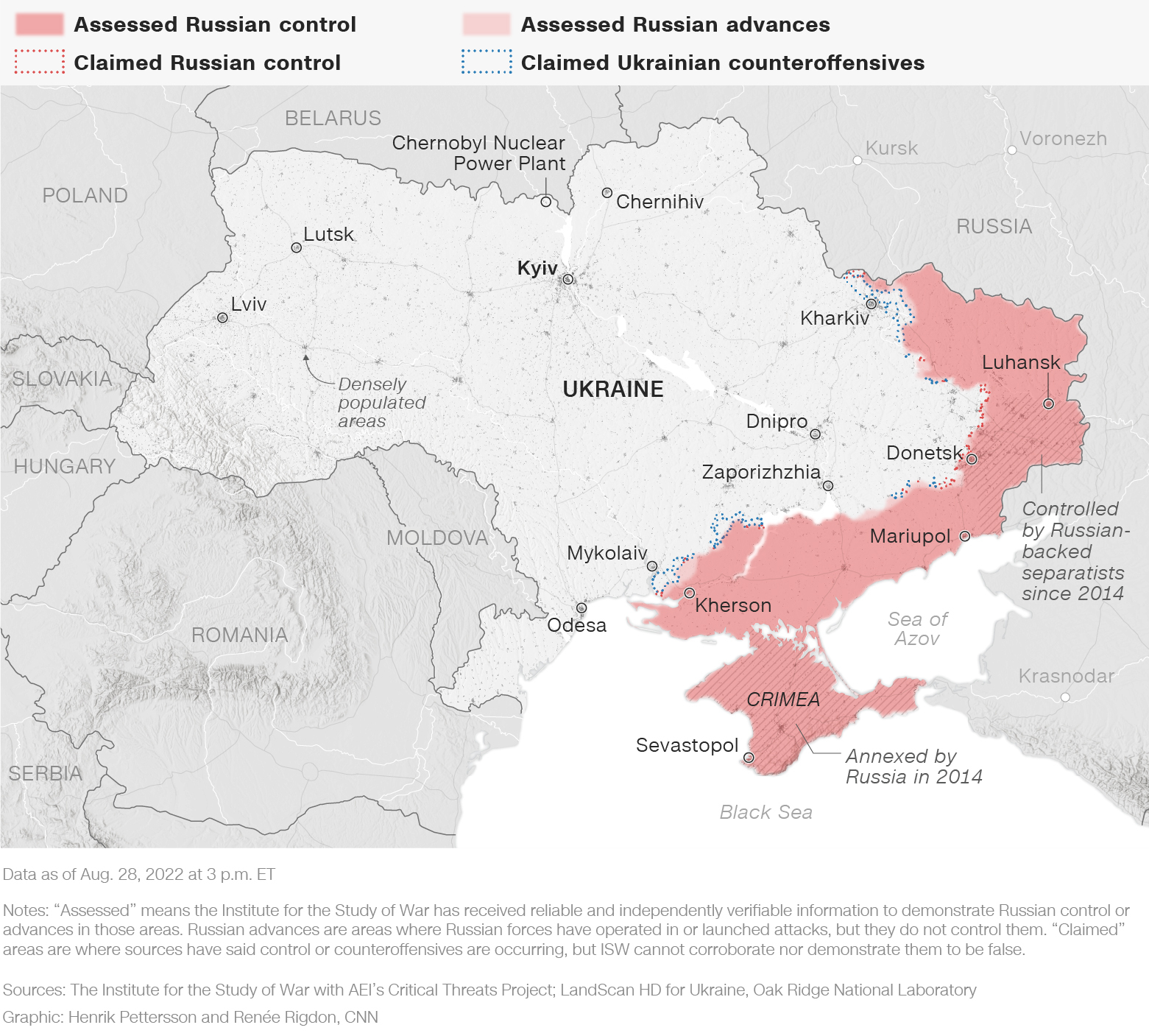 Earlier Monday, a Ukrainian military source told CNN that Ukrainian troops had taken four villages — Novodmytrivka, Arkhanhel's'ke, Tomyna Balka and Pravdyne — back from Russian occupation, adding that the main target was the city of Kherson.