The US State Department confirmed the death of another American citizen in the war in Ukraine.

"We can confirm the death of a US citizen in Ukraine,” a State Department spokesperson said. “Out of respect for the privacy of the family, we have no further comment at this time."

The State Department did not release the name of the American or any details about the circumstances of their death.

This is at least the third US citizen to die in the invasion. Stephen Zabierslki was killed in May and Marine Corps veteran Willy Cancel was killed in April.

Meanwhile, two American volunteers fighting for Ukraine have been held by Russian-backed separatists in Donetsk. US citizens Alexander John-Robert Drueke, 39, from Tuscaloosa, Alabama, and Andy Tai Ngoc Huynh, 27, from Hartselle, Alabama, had been fighting alongside Ukrainian forces north of Kharkiv before they were captured.

CNN has reported that a third American US Marine veteran Grady Kurpasi is missing in action. The last time his wife and close friends had heard from Kurpasi was in April. He chose to volunteer alongside Ukrainians in Ukraine but initially did not envision himself fighting on the front lines, a family friend told CNN.

Tensions continue to rise around the Zaporizhzhia nuclear power plant, which is located in the Russian-occupied part of southern Ukraine and is the largest complex of its kind in Europe.

Both Ukraine and Russia have tried to point the finger at each other for threatening nuclear terrorism. Kyiv has repeatedly accused Russian forces of storing heavy weaponry inside the complex and using it as cover to launch attacks. Moscow, meanwhile, has claimed Ukrainian troops are targeting the site.

Here are the top headlines to know from Friday: 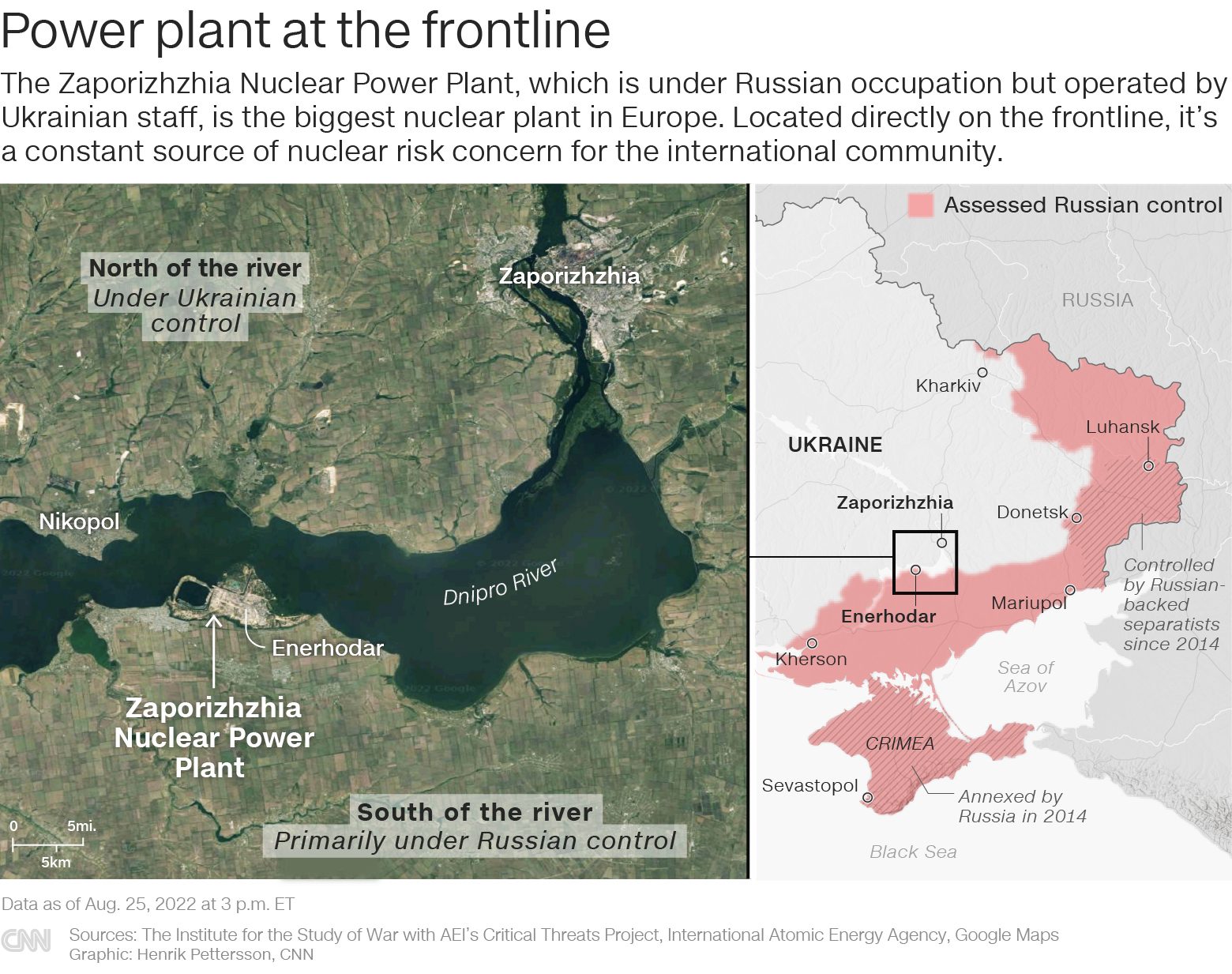 Ukrainian President Volodymyr Zelensky lauded workers at the Zaporizhzhia nuclear power plant after they successfully reconnected it to Ukraine's national grid on Friday.

“Our nuclear scientists, all specialists in the energy industry, managed to protect the Zaporizhzhia nuclear power plant from the worst-case scenario, which is constantly being provoked by Russian forces. Currently, the station is connected to the network. Congratulations! It produces energy for Ukraine,” Zelensky said during his daily nighttime address.

Zelensky also emphasized that “the situation remains very risky and dangerous. Any repeat of yesterday's events, that is, any disconnection of the plant from the grid, any actions by Russia that could trigger the shutdown of the reactors, will again put the plant one step away from disaster.”

More background: Both Ukraine and Russia have blamed each other for security and military action at and around the plant. The lack of independent access to the plant makes it impossible to verify what is happening there. Over the past month, a number of rockets and shells have landed on the territory of the plant, according to satellite imagery analyzed by CNN.

NATO’s secretary general called his trip to Canada’s high north "historic" and promised a new era of Arctic defense as the risk of military conflict in the region increases.

“NATO’s new strategic concept identifies Russia’s capabilities in the high north as a strategic challenge for the whole alliance. Russia has set up a new Arctic command, it has opened hundreds of new and former Soviet-era Arctic military sites, including airfields and deep water ports. Russia is also using the region as a test-bed for many of its new and novel weapons systems,” said NATO Secretary General Jens Stoltenberg during a news conference in Cold Lake, Alberta, alongside Canadian Prime Minister Justin Trudeau.

The secretary general also noted that "the shortest path to North America for Russian missiles and bombers would be over the North Pole."

Stoltenberg is wrapping up a three-day visit to Canada, where he received a firsthand look at the North Warning System radar station in the country’s Arctic.

Canada has been reluctant to expand NATO’s role in the defense of the Arctic. The US and Canada jointly protect the high north through North American Aerospace Defense Command (NORAD) operations.

“The geopolitical situation has shifted over the past months which is why understanding that Russia is an increasing concern to all of us makes it timely for us to share with the secretary general and with NATO all the things that Canada is doing through NORAD, but also independently, to make sure that we’re protecting this region,” Trudeau said.

More context: Even before Russia invaded Ukraine, the Arctic has been a contentious stomping ground in geopolitics as global warming has reduced ice coverage and opened new commercial shipping lanes and made military expansion possible.

The US State Department also announced Friday that President Biden plans to elevate the Arctic coordinator position by appointing an ambassador-at-large for the Arctic region, subject to the consent of the Senate.

In a statement, the State department noted that a “peaceful, stable, prosperous, and cooperative” Arctic region is of critical strategic importance to the United States.

The Zaporizhzhia plant, “despite numerous provocations by the (Russian) occupiers, continues to work in the energy system of Ukraine and provide our country's electricity needs,” Energoatom said in a statement.

The operator praised workers at the plant, describing them as “real heroes."

"They tirelessly and firmly hold the nuclear and radiation safety of Ukraine and the whole of Europe on their shoulders and work selflessly so that their native country has life-giving electricity,” Energoatom said.

Earlier in the day, Energoatom announced that the power plant had been reconnected to Ukraine's electricity grid.

The plant is located in the Russian-occupied part of southern Ukraine and is the largest complex of its kind in Europe.

Russia said it is doing everything it can to make sure a team from the International Atomic Energy Agency (IAEA) can have access to the Zaporizhzhia nuclear power plant, the country’s foreign ministry spokesperson said Friday.

Russia is “doing everything necessary to ensure that the international IAEA mission to the ZNPP (Zaporizhzhia nuclear power plant) takes place, proceeds in a safe manner and is able to achieve all the goals set before it,” Foreign Ministry spokesperson Maria Zakharova said in a statement.

The plant is located in the Russian-occupied part of southern Ukraine, and the UN's nuclear watchdog said it has not been able to visit the facility since before the conflict began six months ago.

Zakharova also called for “an end to the shelling of the station, ensuring its further safe operation.”

Some background: Kyiv has repeatedly accused Russian forces, which seized the plant – the largest complex of its kind in Europe — in March, of storing heavy weaponry inside the complex and using it as cover to launch attacks, knowing that Ukraine can't return fire without risking hitting one of the plant's six reactors, a mistake that would spell disaster.

Moscow, meanwhile, has claimed Ukrainian troops are targeting the site. Both sides have tried to point the finger at each other for threatening nuclear terrorism. The lack of independent access to the plant makes it impossible to verify what is happening there. CNN is unable to verify what strikes occurred or who was responsible.

The Ukrainian military’s General Staff said Friday that Russian forces are “maintaining the captured districts” of parts of Zaporizhzhia, as well as areas of Kherson, Kharkiv and Mykolaiv regions.

Meanwhile, the nuclear power plant has been reconnected to Ukraine's electricity grid, nuclear operator Energoatom said in an updated statement on Friday.

The US Embassy in Kyiv has once again warned Americans against traveling to Ukraine, including to make a pilgrimage to a Ukrainian town for Rosh Hashanah in late September.

In a security alert issued Friday titled “Message for U.S. Citizens Considering Travel to Uman for Rosh Hashanah,” the Embassy reiterated that it suspended consular services in February due to the war and that “the State Department recommends U.S. citizens do not travel to Ukraine.”

The central Ukrainian town of Uman holds the tomb of Rabbi Nachman of Breslov, the founder of the Breslov Hasidic movement. Thousands of Jewish pilgrims each year travel to the memorial to celebrate the Jewish new year.

In March, CNN reported that a makeshift bomb shelter had been established in the synagogue.

Last week, Ukraine’s Ambassador to Israel Yevgen Korniychuk told the Jerusalem Post that Ukraine cannot guarantee the security of those who make the pilgrimage.

According to the publication, more than 30,000 made the journey last year, mostly from Israel, and the ambassador told them that such a large gathering this year could lead to an attack by the Russians.

French oil and gas giant TotalEnergies said Friday it complete the sale of its stake in a Russian company producing jet fuel.

The comment followed the publication on Thursday of an article by the French newspaper Le Monde reporting that the “French oil and gas giant and its local partner Novatek manage a gas field whose product, once transformed into kerosene, is used to fuel Russian fighter planes engaged in the war in Ukraine. Terneftegaz, the company that runs the field, is 49% owned by TotalEnergies and 51% by Novatek.”

In response to the Le Monde report, TotalEnergies issued a statement Friday saying that while Terneftegaz produces jet fuel at its Purovsky plant in western Siberia, it does not have the certification to be sold inside Russia.

“The entirety of stable condensate produced at the Purovsky Plant from the feedstock coming from NOVATEK's subsidiaries and affiliates, including Terneftegas, is delivered to the Ust-Luga processing complex in the Leningrad Region. The range of products derived during processing at the Ust-Luga Complex includes jet fuel (Jet A-1) that is exclusively exported outside Russia, and it does not even have the certification to be sold inside the country,” TotalEnergies said.

The company said the media reports and calls to investigate its activities and activities by its joint companies have “absolutely no basis in fact.”

The company then concluded that “no, TotalEnergies does not produce jet fuel for the Russian army.”

Following that statement, TotalEnergies also that it sold “its 49% interest in the Russian Termokarstovoye gas field to Novatek," and that it “continues to implement its principles of conduct.”

Meanwhile, Ukrainian Foreign Minister Dmytro Kuleba on Friday called on TotalEnergies to pull out of Russia.

Kuleba said via Twitter that his country is “grateful to (French President) @EmmanuelMacron and the French people for supporting Ukraine," but "against this background, it is a disgrace to France when French companies assist the murder of Ukrainians and the ruining of our cities. @TotalEnergies, pull out of Russia!”

Earlier this year, TotalEnergies also stated that it would stop buying Russian oil and oil products by the end of 2022 at the latest.

The company, however, said that it will continue to purchase natural gas from Russia.

"Unlike oil supply, it appears that Europe's gas logistics capacities make it difficult to do without Russian gas in the next two to three years without affecting the continent's energy supply," TotalEnergies said in a statement.

The company said it will mobilize oil products from other places, especially diesel produced by the SATORP refinery in Saudi Arabia.

TotalEnergies' contracts for Russian oil accounted for 12% of Russia's diesel exports to the European Union in 2021, according to the statement.

The company reiterated that it doesn't operate any oil or gas fields or liquified natural gas plants in Russia and is moving toward a gradual suspension of its activities in Russia, according to the statement.