Radiation levels at Europe’s largest nuclear power plant are within the normal range despite renewed shelling on the site, Ukraine’s nuclear agency Energoatom said on Thursday.

“As of 17:00 (10aET), the radiation background at the Zaporizhzhia nuclear power plant is 11-12 μR/h, which corresponds to natural norms,” according to Energoatom.

Energoatom said there was currently no fire at the Russian-occupied plant but accused Moscow of firing on it earlier in the day.

At least 10 shells landed in the area around the nuclear complex, five near the station commander’s office and five near the fire department, the agency said.

“As a result of shelling at the station, it was not possible to carry out a shift handover in time. For the safety of nuclear workers, the buses with the personnel of the next shift were turned back to Enerhodar,” Energoatom said. “Until the situation finally normalizes, the workers of the previous shift will continue to work.”

“The situation at the station is currently under control,” it said.

A group of 26 countries pledged more than $1.55 billion (1.5 billion euros) in aid to Ukraine, Danish Defense Minister Morten Bødskov said after hosting ministers from allied countries in Copenhagen for a conference to discuss long-term support for Ukraine, including military training and weapon supplies.

"Participants today have committed more than 1.5 billion euros to the table for Ukraine. The United Kingdom is setting up a fund in order to gather financing for increased production of weapons,” he said at a press conference, speaking alongside his British and Ukrainian counterparts, Ben Wallace and Oleksii Reznikov.

Reznikov said he was “satisfied with the results” of the donor conference.

“I’m glad that we all have common sense, that there is no time for fatigue, that it’s a marathon. For marathon you need energy and frankly speaking the main energy in this case is money. Our partners know that we need funding and they articulated readiness to support us financially,” the Ukrainian minister added.

Ukrainian President Volodymyr Zelensky has accused Russia of maximizing the risk of a nuclear disaster at the Zaporizhzhia nuclear power plant, which was taken over by Russian forces in early March.

Addressing a meeting of allies from across northern Europe, Zelensky recalled the Chernobyl disaster.

"If the Soviet authorities tried to hide the Chernobyl disaster and its full consequences, then the Russian authorities are much more cynical and dangerous. They themselves do everything to maximize the risk of a nuclear disaster and lie to the whole world that someone else is allegedly to blame," he said.

Zelensky accused Russia of turning the nuclear power plant into a "battlefield."

"The Russian occupation army is using the Zaporizhzhia nuclear power plant for terror and armed provocations," he added.

The Ukrainian president also reiterated his demand that Russia be declared a terrorist state and also urged tougher sanctions.

Russia "simply would not have a combat-ready army in modern conditions if it were not for imported parts. Electronics, optics and many other parts of foreign production are used in the creation of missiles, drones, means of communication, armored vehicles, etc. This flow of technical assistance to Russian terror must be completely stopped," he said.

Ukraine's monthly deficit of is about $5 billion dollars, he told the Allied conference. "Ukraine needs reconstruction. Now. We need to carry out demining. And, of course, we need to prepare defenses for winter conditions," he said. "Financial support for our state, for the budget and for fast recovery is as vital as weapons and ammunition for our army and sanctions against Russia."

Germany will launch a new package of measures to help ease the impacts of the energy crisis on citizens as Russia's war in Ukraine continues.

This includes a tax relief for low-income families and for people who have problems paying their energy bills, German Chancellor Olaf Scholz said on Thursday.

"Citizens can count on us not to abandon them," Scholz told journalists at a news conference in Berlin.

The proposal follows an announcement from Chancellor Scholz in July that German households would have to pay for higher gas prices in the fall as a result of a gas standoff with Russia.

On Thursday, Scholz also said that Germany is determined to tackle an energy crisis in the coming winter in solidarity with its European partners.

"I believe that as the biggest country with the greatest economy and the largest population at the center of Europe, we have a special task," Scholz said. "We are the ones that have to do their share so that progress and sustainability come to pass in Europe. This is something that I commit to."

At least two people were killed by Russian shelling in central Ukraine overnight, and pro-Russian forces say they have entered two towns in the eastern Donetsk region. Various European leaders have also pledged more military support for Ukraine, including rocket systems promised by the United Kingdom. 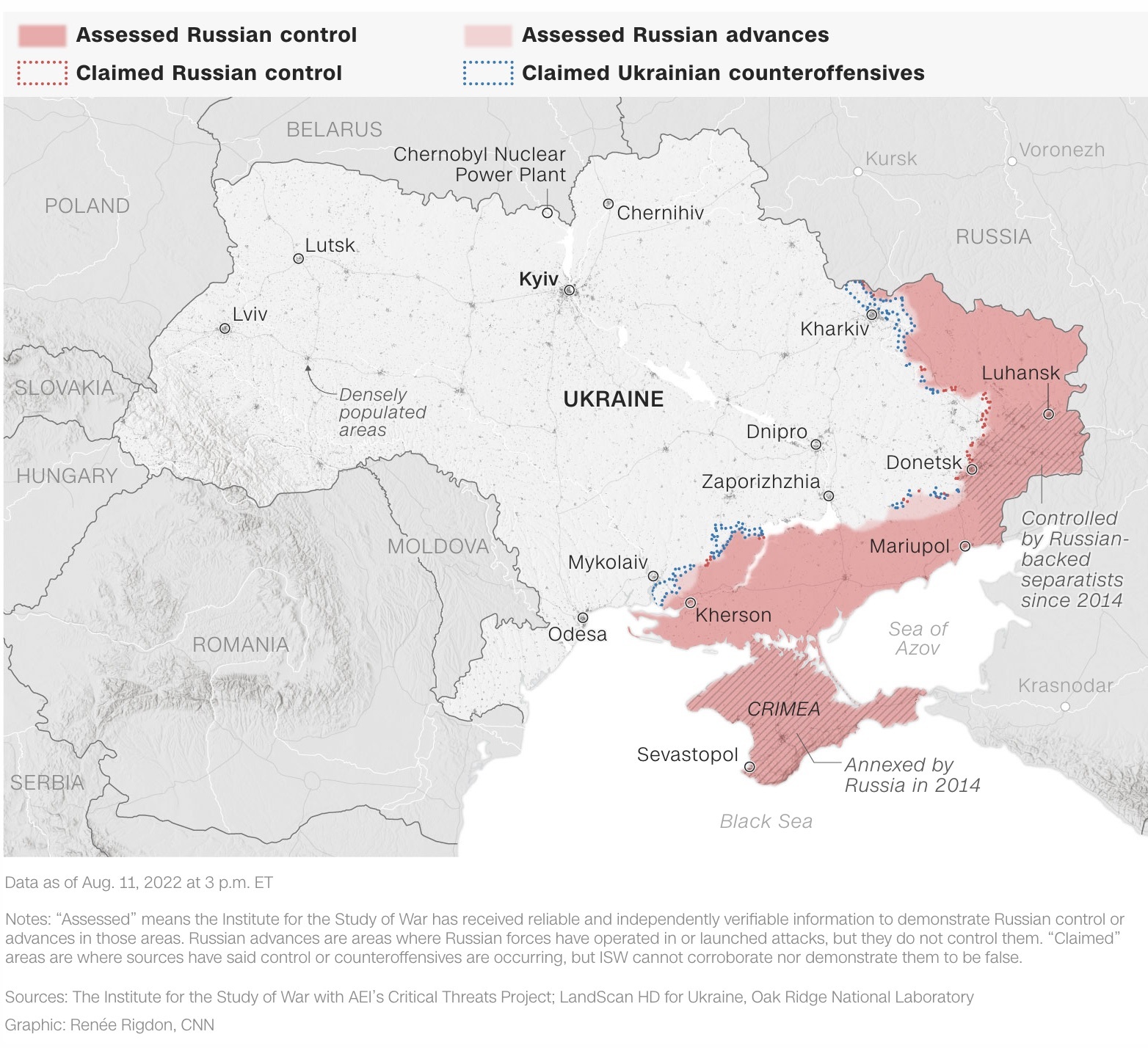 The United Nations Secretary General said he is “gravely concerned” about the situation at Zaporizhzhia nuclear power plant in southern Ukraine,

Reports of "further deeply worrying incidents” in the past few days could “lead to disaster," António Guterres said.

He called for the involved parties to withdraw any military personnel and equipment from the plant “and refrain from any further deployment of forces or equipment to the site.”

“We must be clear that any potential damage to Zaporizhzhia or any other nuclear facilities in Ukraine, or anywhere else, could lead to catastrophic consequences not only for the immediate vicinity, but for the region and beyond,” he added. “This is wholly unacceptable.” 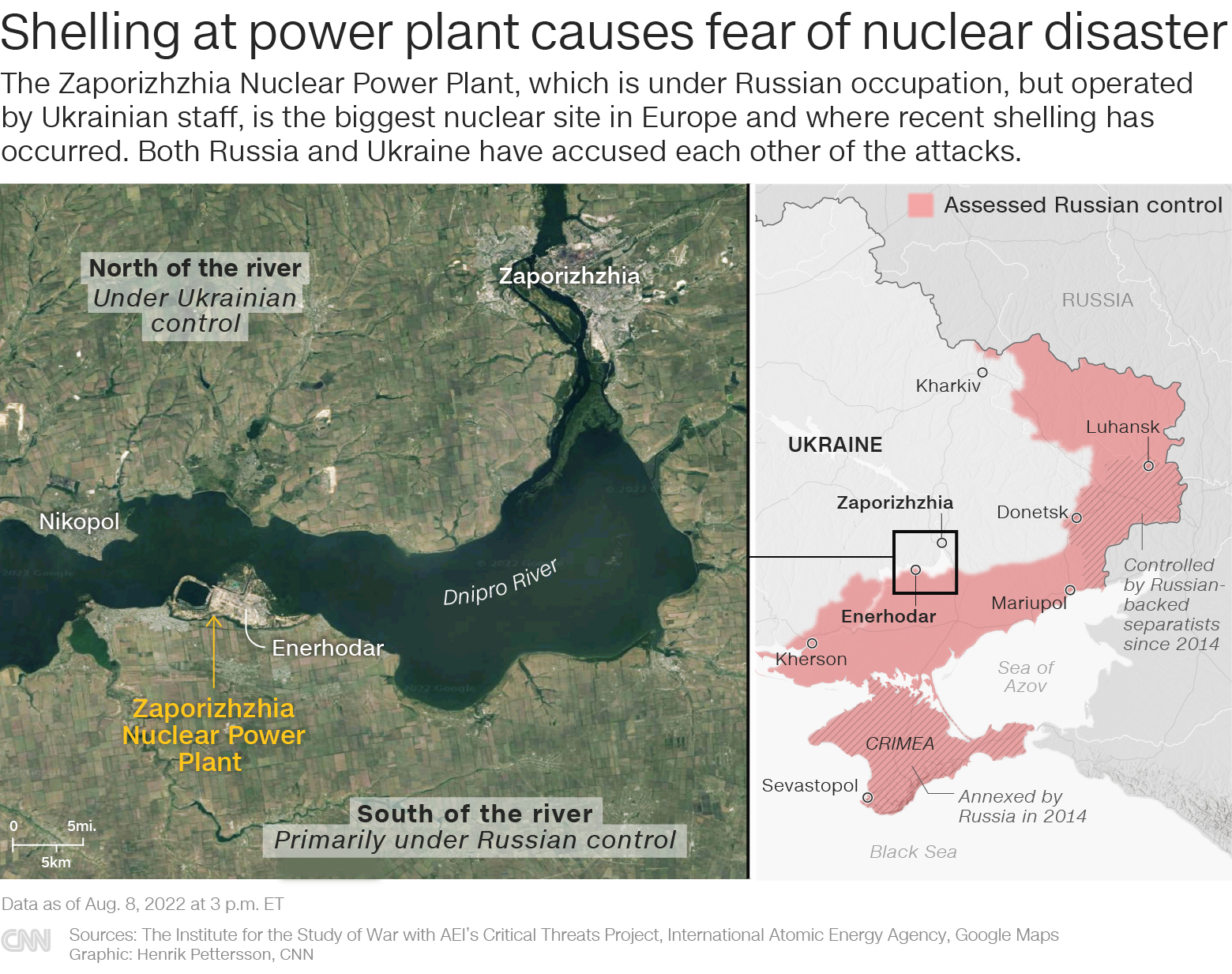 German Chancellor Olaf Scholz said on Thursday that Germany will continue to provide Ukraine with arms deliveries for its fight against Russia.

"Germany has broken with its tradition and supplied weapons to a war zone," Scholz told journalists at a press conference in Berlin.

"We will continue to do so in the near future," Scholz said, without giving specific details.

In July, the German government released a list of lethal and non-lethal military aid provided to Ukraine.

Danish Prime Minister Mette Frederiksen announced on Thursday that Denmark will give another 110 million euros ($113.7 million) in financial aid to Ukraine for "weapons, equipment and training."

"I hope that we here today can agree on even more contributions. And of course, Denmark is ready to do our part," Frederiksen said at an international donor conference in Copenhagen.

Ukrainian President Volodymyr Zelensky also made a virtual appearance to thank the participants.

She said three of the activists had been detained and posted several photographs showing security forces carrying out the raids.

The wife of Temerianov said in a Facebook video that three men wearing balaclavas were among those that arrested her husband. They had said that the investigation was to do with criminal extremism, and had asked questions about postcards at the house that were to be sent to Crimean activists in prison.

The Russian-backed authorities in Crimea have not made any comment.

Thousands of Crimean Tatar people began to return to the peninsula in the late 1980s. Some 200,000 Crimean Tatars had been forcibly deported by Stalin in 1944 in what the Ukrainian parliament has recognized as an act of genocide.