Serhiy Hayday, the head of Luhansk regional military administration, said Saturday the key eastern Ukrainian city of Severodonetsk was "not cut off," as Russian troops press a concerted offensive in the Luhansk region.

Hayday said intense Russian shelling was underway in Severodonetsk, an industrial center which is the last major stronghold of Ukrainian control in the Luhansk region.

"The shelling continues," he said. "The Russian army is destroying the city, shelling with all kinds of weapons. Russian troops entered the outskirts of the city, the Mir Hotel. We can't get them out of the hotel yet, but they have a lot of dead. Our guys are holding them back."

Severodonetsk, added Hayday, "is not cut off but, by and large, trucks will not pass there, only cars. Many cars were shot on the Lysychansk-Bakhmut route. It is dangerous to pass along that route."

Ukrainian forces are fighting to stave off an apparent effort by Russian forces to encircle the defenders of Severodonetsk, with Russian troops advancing in several directions around a pocket of Ukrainian-held territory.

Hayday said Russia had 25 battalion tactical groups in the Luhansk region -- numbering 10,000 soldiers -- and substantial amounts of military hardware. He said Russian commanders had committed a range of forces to the fight, including conscripts from the self-proclaimed separatist Donetsk and Luhansk People's Republics, fighters from Russia loyal to Chechen Republic leader Ramzan Kadyrov and private military companies, or PMCs. 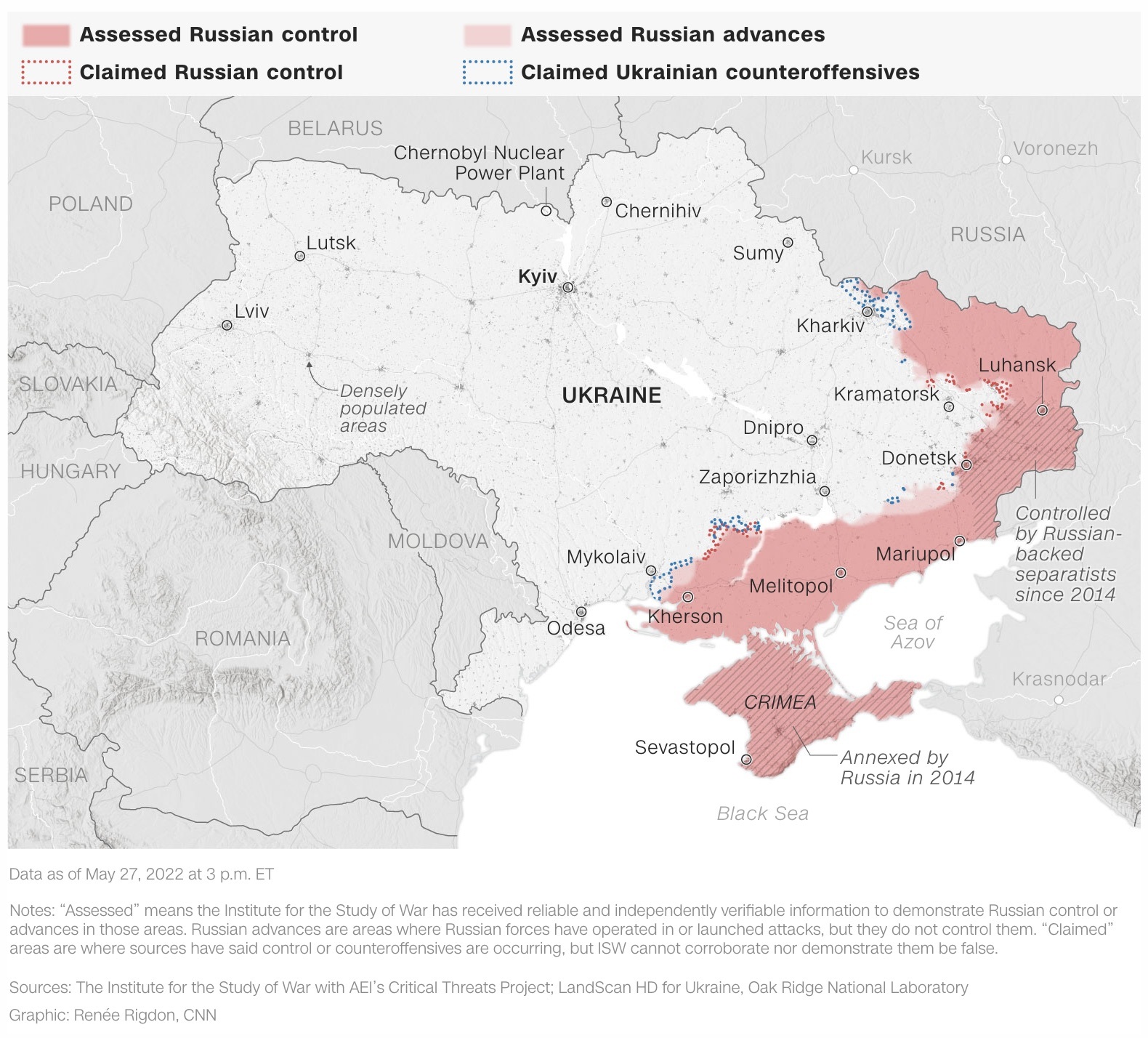 "The border is now closed for security reasons … we do not advise travel to Ukraine at all, regardless of the pretext," Stremousov said according to RIA.

Kherson’s border crossings with the Ukrainian regions of Mykolaiv and Dnipropetrovsk are closed, while travel from Kherson to Crimea or the Russian-controlled areas of Zaporizhzhia remains possible, Stremousov added.

Nearly all of Kherson — located in Southern Ukraine — has been occupied by Russia since the beginning of Russia's invasion of Ukraine in late February.

Some context: Exit points from Kherson have been unofficially blocked off for weeks, according to Ukrainian officials, who allege that anyone wanting to leave the area has been sent to Crimea.

CNN has spoken to dozens of Ukrainian families at length about their difficult journeys in and out of the region.

Efforts by the Russian-installed administration in Kherson to install military bases and advance a referendum to make the region a “Republic” — mirroring other separatists statelets in eastern Ukraine — are ongoing.

Ukraine's President Volodymyr Zelensky said the situation in Donbas is "very difficult" as Russia ramps up firepower and manpower, and makes incremental gains in the southeastern region. But he vowed Donbas would be "Ukrainian again."

The US Defense Department awarded a top defense contractor a $624 million contract to replenish Stinger anti-aircraft missiles, one of the key systems the US has provided to Ukraine as Russia's war continues.

The department announced the contract to Raytheon on Friday afternoon, though it was officially awarded on Wednesday. The contract is "for the procurement of Stinger missiles and associated equipment." There is no timeline listed for completion of the work.

The US has sent more than 1,400 Stinger systems, including missiles and launchers, to Ukraine to help them challenge Russia's attempt to control the skies. Stingers are short-range anti-aircraft missiles with a range of about 3 miles (nearly 5 kilometers).

Though their range is too short to allow them to target high-flying aircraft, they can effectively shoot down drones and low-flying aircraft and helicopters. The US has little use for Stingers, but they have been in high demand in Ukraine since the beginning of the invasion.

Ukrainian President Volodymyr Zelensky has promised that Donbas will be "Ukrainian again," as Russian forces continue to make incremental gains in the southeastern region.

Speaking during his nightly address Friday, Zelensky called the current situation in Donbas "very difficult," referencing Russia's ramping up of firepower and manpower in the region.

"That's why we have to increase our defense, increase our resistance, and Donbas will be Ukrainian again. Even if Russia will bring all suffering and ruination to Donbas, we will rebuild every town, every community. There's no real alternative," Zelensky stressed.

The US Defense Department maintained during a press briefing Friday that Russia is continuing to make "incremental gains" in Donbas.

Ukraine continues to call on international partners, including the United Kingdom, to provide it with multiple launch rocket systems to counter the Russian offensive.

While acknowledging Ukraine's request, Pentagon press secretary John Kirby stressed during Friday's briefing that “decisions… haven’t been made yet.”

The US Defense Department said it is “mindful and aware” of Ukraine’s request for multiple-launch rocket systems, but that “decisions … haven’t been made yet.”

“Our goal from the very beginning has been to try to help them in the fight that they’re in today,” said outgoing Pentagon press secretary John Kirby at a briefing with reporters.

“I won't go so far as to say it's too late to provide the Ukrainians with any system or capability that they might need because they are very active in the fight and they have pushed back the Russians up near Kharkiv,” Kirby said.

However, Kirby said the Defense Department is “mindful of the clock” when it comes to Russia’s invasion of Ukraine.

“We are ever mindful as we have been since the beginning, mindful of the clock here, mindful of this sense of urgency, mindful that time is not our friend,” said Kirby, “which is why we have been continuing to move equipment literally every day for the last 90 plus days of this war.”

CNN reported Thursday that the Biden administration is preparing to send MLRS systems as part of a larger package of military and security assistance to Ukraine, which could be announced as soon as next week. The MLRS and its lighter-weight version, the HIMARS, can launch as far as 300 kilometers (186 miles), depending on the type of munition.

Ukrainian officials are denying that Severodonetsk in the Luhansk region is surrounded, but have acknowledged that Russian forces hold one part of the city.

"The city is not cut off, and it is not surrounded. The fighting continues," said Serhiy Hayday, head of the Luhansk region's military administration, in a radio interview. The Russian army has "only entered the outskirts of the city," he claimed.

"This is a war, a war against a very powerful enemy, and in theory anything is possible," Hayday said when asked about the possibility of Russian troops gaining further ground in the city. "The higher military command sees this situation. But so far I can't say that in a day, two, three they will completely take over the area. No, most likely they won't."

"We have enough strength," he continued, while also cautioning that, "Maybe there will be a command to our troops even to retreat."

Ukrainian President Volodymyr Zelensky said nearly half of Ukraine’s grain export supply is currently held up as Russia continues to block the country’s main export routes through the Black Sea and Azov Sea, calling the situation a potential “catastrophe” for global food security.

Addressing an Indonesian foreign policy think tank in an online forum Friday, Zelensky said, “22 million tons of grain are kept in silos today. We cannot supply them to international markets where they are needed at this very point in time."

The Ukrainian president also said the UN estimates that famine might affect an additional 50 million people this year were a “conservative” estimate, implying that the number of those affected will be greater.

“Famine doesn’t come alone, it is always accompanied by political chaos that exacerbates the situation, ruins people’s lives, creating unsafe conditions for ordinary people," he said. "In July, when many countries will exhaust their stock of last year’s harvest, it will become obvious the catastrophe is truly coming."

The Ukrainian president also accepted an invitation to attend the G20 Summit in Indonesia in November. He urged the hosts to include “only friendly nations,” implying Russia should be excluded from the summit in Bali.

About 90% of residential buildings in Severodonetsk have been damaged amid a "fierce defense" of the eastern Ukrainian city, a local military official said Friday.

The city "held out through the night" under heavy Russian attack, Oleksandr Striuk, the head of the Severodonetsk military administration, said in a radio interview. But he acknowledged that Russian forces were continuing to press the offensive.

"Yesterday the fighting took place at the entrance to the city," he said. "Our military managed to stop the vanguard of the Orcs [a pejorative Ukrainian term for Russian troops] who were trying to break into the city. Severodonetsk is in fierce defense. The enemy is located on two-thirds of the city's perimeter, but the city is not surrounded."

"The Azot (Nitrogen) chemical plant is being shelled," he said. "There are dead among the civilian population and among employees of the enterprise. Ninety percent of the housing stock is damaged, 60% will have to be rebuilt."

Striuk said a Russian force that entered a hotel on the north of the city was expelled by Ukrainian forces, a claim that could not be immediately verified. Ukrainian officials previously said the hotel was not under their control.