Negotiations between Russia and Ukraine are currently frozen, the Kremlin said Friday, as it accused Kyiv of making “contradictory” statements that Moscow does not understand.

“The negotiations are frozen by the decision of the Ukrainian side,” Kremlin spokesman Dmitry Peskov told reporters on a regular conference call.

“In general, the leadership of Ukraine constantly makes statements that contradict each other. This does not allow us to fully understand what the Ukrainian side wants,” Peskov added.

On Thursday, Peskov said Moscow expects Kyiv to accept the status quo and meet its territorial demands, following remarks by former US Secretary of State Henry Kissinger that appeared to suggest Ukraine has to agree to give up Crimea and much of the Donbas region to Russia.

In an interview last week with Reuters, Ukrainian presidential adviser Mykhailo Podolyak ruled out agreeing to a ceasefire with Russia and said Kyiv would not accept any deal with Moscow that involved ceding territory.

“I think it’s very, very important that we do not get lulled because of the incredible heroism of the Ukrainians in pushing the Russians back from the gates of Kyiv," Johnson said in an interview with Bloomberg.

“I’m afraid that Putin at great cost to himself and to (the) Russian military is continuing to chew through ground in Donbas, he’s continuing to make gradual, slow but I’m afraid palpable progress," he added.

Johnson stressed that therefore "it is absolutely vital" to continue to support the Ukrainians militarily.

"What they need now is the type of rocketry, a Multiple Launch Rocket System, MLRS, that will enable them to defend themselves against this very brutal Russian artillery, and that's where the world needs to go now," he said.

Johnson also warned of the dangers of negotiating with Putin, and compared him to a crocodile.

"How can you deal with a crocodile when it's in the middle of eating your left leg?" Johnson told Bloomberg TV. "[Putin] will try to freeze the conflict. He will try and call for a ceasefire while he remains in possession of substantial parts of Ukraine."

Russian forces are intensifying attacks in eastern Ukraine as they try to break down stubborn Ukrainian defenses — which Ukrainian officials admit are outnumbered and outgunned.

Ukrainian officials on Friday reported continued heavy fighting in the Luhansk region, with a local military chief describing "fierce battles" for the city of Severodonetsk.

In televised remarks, Oleksandr Striuk, head of the Severodonetsk city military administration, said: "There have been fierce battles for the city. We have a hot spot, the Mir hotel. On May 26 [Thursday], an enemy sabotage and reconnaissance group entered the Mir Hotel. The [Ukrainian] Armed Forces resisted."

A pro-Russian Telegram channel said Russian forces had entered the hotel, which is in the north of Severodonetsk, and that street fighting was underway.

Serhiy Hayday, the head of the Luhansk regional military administration, said a Ukrainian operation to retake the hotel was underway on Friday, but added: "We are not yet in control of the hotel. But we are working to drive out the ruscists [Russian fascists]."

Hayday also described heavy shelling around Severodonetsk and neighboring Lysychansk as Russian forces pushed from the direction of the towns of Purdivka and Shchedryshchevo, saying it had set the police station in Lysychansk on fire and damaged about 50 buildings in the area.

"Residents of Severodonetsk have already forgotten what it is like when the city is silent for at least half an hour," Hayday said.

"Russians are harassing residential neighborhoods continuously. On May 26, four residents of Severodonetsk were killed by enemy shells in the old districts of the city. Two of them died at the same time near one high-rise building. There is damage to the housing stock; 11 apartment buildings and one private house damaged."

Russia's actions in Ukraine provide enough evidence to conclude that Moscow is inciting genocide and committing atrocities intended to destroy the Ukrainian people, according to the first independent report into allegations of genocide in that country.

The legal report, signed by more than 30 leading legal scholars and genocide experts, accuses the Russian state of violating several articles of the United Nations Genocide Convention. It warns there is a serious and imminent risk of genocide in Ukraine, backing the accusations with a long list of evidence including examples of mass killings of civilians, forced deportations and dehumanizing anti-Ukrainian rhetoric used by top Russian officials.

The report was put together by New Lines Institute for Strategy and Policy, a US-based think tank, and the Raoul Wallenberg Centre for Human Rights which is based in Canada, and is set to release on Friday, with the authors sending copies to parliaments, governments and international organizations around the world. An advance copy of the report has been shared exclusively with CNN.

"We assembled top legal experts from around the globe who then examined all the evidence and they came to the conclusion that the Russian Federation bears responsibility for breaches of the Genocide Convention in Ukraine," Azeem Ibrahim of the New Lines Institute told CNN. Ibrahim visited Ukraine in March to gather evidence for the report.
"This is a very thorough and detailed examination of extensive evidence," he said. "What we have seen so far is that this war is genocidal in its nature, in terms of the language being used and the manner in which it is being executed. That's very, very clear." 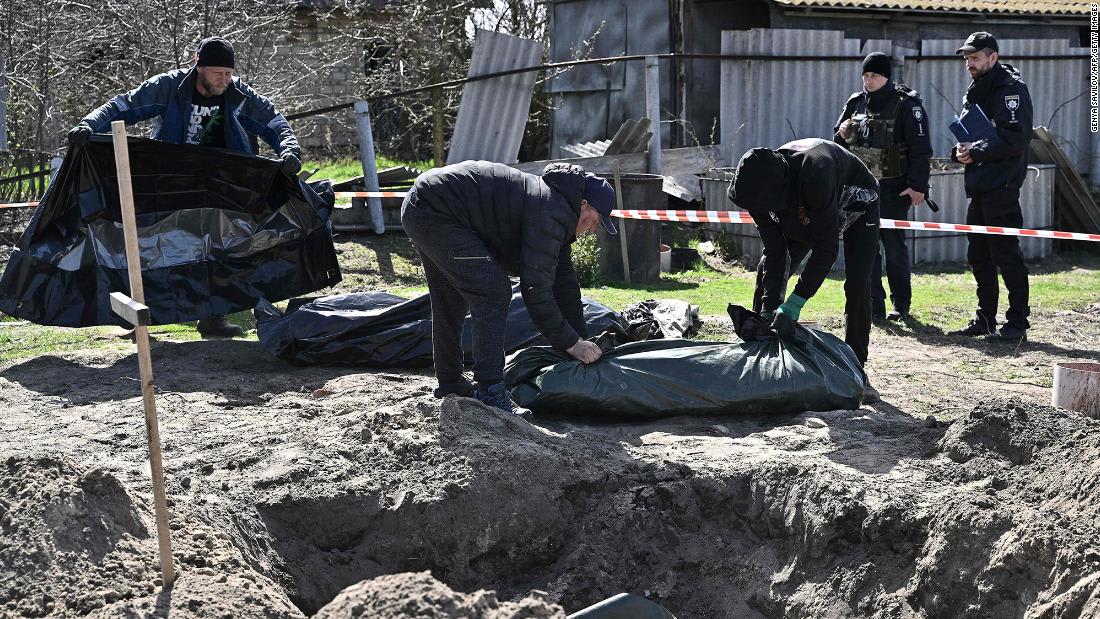 Russian forces are intensifying attacks in eastern Ukraine as they try to break down stubborn Ukrainian defenses — which Ukrainian officials admit are outnumbered and outgunned.

"The current offensive of the occupiers in Donbas can make the region uninhabited," Zelensky said. "They want to burn Popasna, Bakhmut, Lyman, Lysychansk and Severodonetsk to ashes. Like Volnovakha, like Mariupol."

In cities closer to the Russian border like Donetsk and Luhansk, Russian forces "gather everyone they can to fill the place of those killed and wounded in the occupation contingent," Zelensky said.

"All this, including the deportation of our people and the mass killings of civilians, is an obvious policy of genocide pursued by Russia."

Zelensky said putting pressure on Russia "is literally a matter of saving lives" and that every delay, dispute or proposal to "appease" Russia leads to "new killed Ukrainians" and new threats to everyone on the continent.

Nine people, including a 5-month-old baby, were killed in Kharkiv on Thursday amid "dense shelling" on residential areas near the city center, according to Oleh Synyehubov, head of the Kharkiv region military administration.

Among those killed was “a family who was simply walking down the street — a man was holding his five-month-old baby in his hands, whom he died holding. (The) mother of this baby is severely wounded and is now in the hospital,” Synyehubov said.

He also described the artillery used, and said the targeting of residential areas in Ukraine's second-largest city could only be for the purpose of “terrorizing” local residents.

"The enemy shelled with MLRS SMERCH and URAGAN and with artillery, modification of which is being established now by our military experts. According to the available data. the shelling was conducted from the North of the oblast, where our troops are holding their positions and slowly pushing the enemy away to the borders. This was a solely residential area, so the aim of this shelling could only be terrorizing the local residents," he said.

The official added it was the Shevchenkivskyi and Kyivskyi districts of Kharkiv that were “densely shelled.” He said in addition to those killed, 19 were injured, among them a 9-year-old child.

“As of now our armed forces holding their positions firmly and there is no question about possible seizure of Kharkiv city,” he said.

The Biden administration is preparing to step up the kind of weaponry it is offering Ukraine by sending advanced, long-range rocket systems that are now the top request from Ukrainian officials, multiple officials say.

The administration is leaning toward sending the systems as part of a larger package of military and security assistance to Ukraine, which could be announced as soon as next week.

Senior Ukrainian officials, including President Volodymyr Zelensky, have pleaded in recent weeks for the US and its allies to provide the Multiple Launch Rocket System, or MLRS. The US-made weapon systems can fire a barrage of rockets hundreds of kilometers — much farther than any of the systems Ukraine already has — which the Ukrainians argue could be a gamechanger in their war against Russia.

Another system Ukraine has asked for is the High Mobility Artillery Rocket System, known as HIMARS, a lighter wheeled system capable of firing many of the same types of ammunition as MLRS.

Russia has in recent weeks pummeled Ukraine in the east, where Ukraine is outmanned and outgunned, Ukrainian officials have said.

The Biden administration waivered for weeks, however, on whether to send the systems, amid concerns raised within the National Security Council that Ukraine could use the systems to carry out offensive attacks inside Russia, officials said. 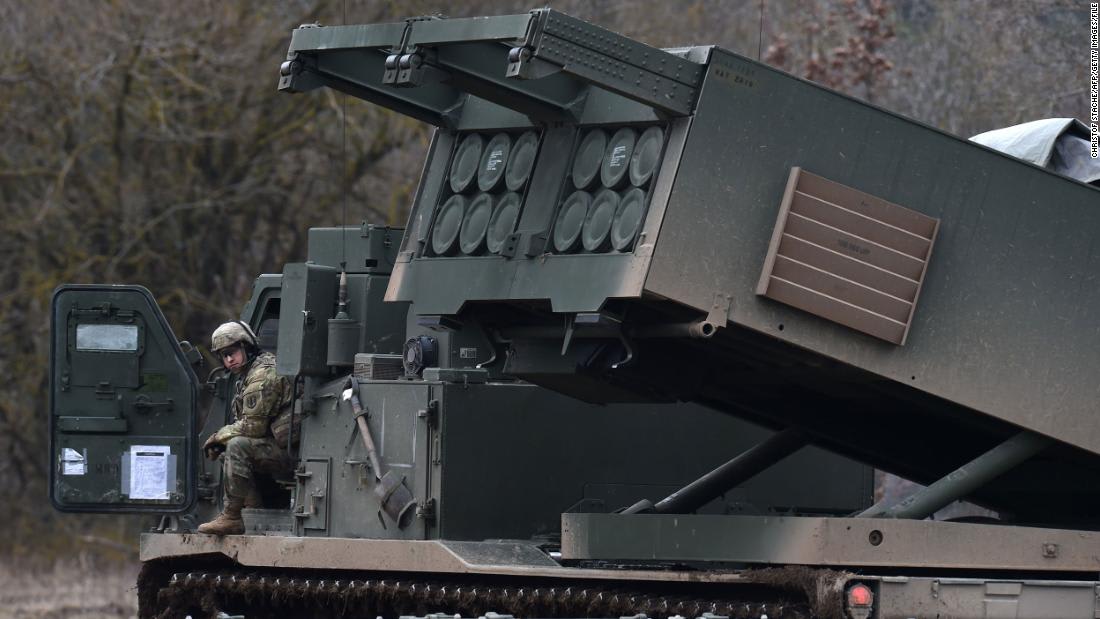 US preparing to approve advanced long-range rocket system for Ukraine