Russian Foreign Minister Sergey Lavrov said Moscow must cease any dependency on the West and that it is instead strengthening ties with China.

"Now that the West has taken a 'dictator’s position,' our economic ties with China will grow even faster," Lavrov told an audience at a question and answer session in Moscow on Monday, according to a transcript from the Russian Foreign Ministry.

He said China has "highly developed" information and communications technologies that are in "no way inferior to the West," which "ensure mutual benefits."

The foreign minister said if the West wants to resume relations, then Moscow would consider if the country needed it or not.

He added that Russia needed to stop being dependent "in any way" on supplies from the West for the development of "security, the economy or our homeland’s social sphere."

"When we can finally count only on ourselves and on countries which have proven themselves reliable and do not dance to someone else’s tune, then if Western countries come to their senses and begin to propose some form of cooperation, it will be up to us to decide," he added. 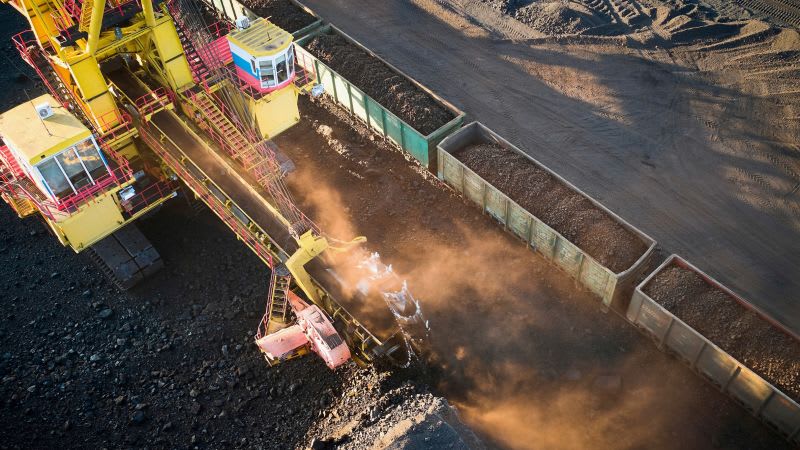 The pro-Moscow authorities of Ukraine's Kherson region will request a Russian military base in the region, Russian state news agencies reported Tuesday.

Russian state news agencies RIA-Novosti and TASS quoted Kirill Stremousov, deputy head of the Russian-installed administration of Kherson region, as saying, "there should be a military base of the Russian Federation in the Kherson region. We will ask for this, and the entire population is interested in this."

The Russian military took control of parts of the Kherson region in mid-March, and Russian-backed officials claim to have occupied a series of government posts.

Ukrainian officials estimate around half the population of Kherson has now left the region, many of whom say they have fled heavy-handed Russian rule.

Russian efforts to advance a referendum on a so-called "Kherson People's Republic" that would mirror the emergence of Russian-backed separatist statelets in eastern Ukraine appeared to have been put on hold.

The Colombian armed forces are sending a team to Ukraine to train its military on landmine removal operations, the Colombian Ministry of Defense said in a statement on Monday.

The 11 military engineers will be deployed to an unnamed neighboring NATO country where the training will be carried out, according to the statement.

"Colombia is as always committed to the values of freedom and human rights and, in this case, making a concrete contribution as a member and global partner country of NATO," Colombian Defense Minister Diego Molano Aponte said.

Some context: In March, US President Joe Biden announced Colombia would be designated as a major non-NATO ally, strengthening security and economic ties between the pair.

As of this year, there are more than 15 nations that are designated as major non-NATO allies to the US, including Australia, Japan, Israel, the Philippines and Qatar. 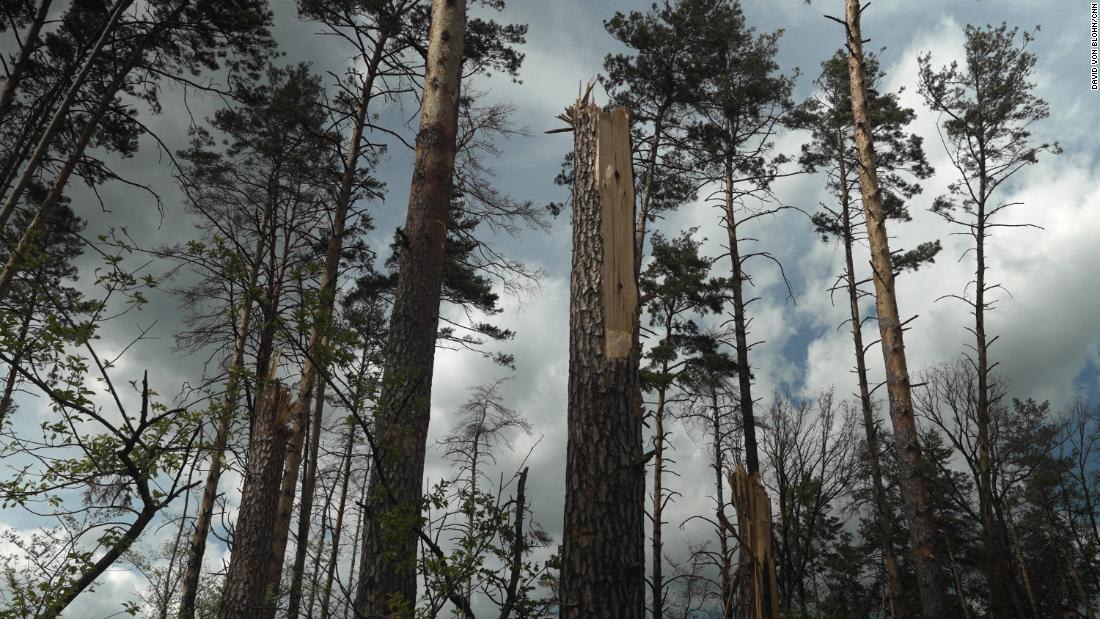 Ukraine's natural environment is another casualty of war. The damage could be felt for decades

US President Joe Biden's first meeting with his new Australian counterpart, Prime Minister Anthony Albanese, focused in part on the war in Ukraine, according to a US statement.

Biden "commended Australia’s strong support for Ukraine since Russia’s invasion, and the leaders agreed on the importance of continued solidarity, including to ensure that no such event is ever repeated in the Indo-Pacific," the White House said in a readout.

Albanese was sworn in on Monday before departing for the Quad Summit in Tokyo, joining leaders from the US, India and Japan.

"The leaders’ committed to continue providing humanitarian assistance, and discussed how to cooperate to manage disruptions caused by the war in Ukraine, in particular the rise in energy and food prices, to protect their respective citizens and the world," the statement said.

Modi has been reluctant to condemn Russia's invasion due to ties between the two nations.

Russia has withdrawn its bid to host Expo 2030 because its bid would not be evaluated "fairly and impartially" under the current "anti-Russian campaign" waged by Western countries, the country’s foreign ministry said.

“It is clear that Moscow's bid to host Expo 2030, faced with competition from the other four candidates, will not be evaluated fairly and impartially,” the ministry said in a statement Monday.

World Expos have become another victim of a "large-scale anti-Russian campaign" waged by Western countries aimed at expelling Russia from all areas of cooperation, the statement said.

The ministry notified the Bureau International des Expositions (BIE) of its decision on Monday, it said.

The BIE confirmed it received notification of Russia's decision and said in a statement that Russian Prime Minister Mikhail Mishustin expressed hope that the country will be a candidate "in the foreseeable future."

Odesa, the southern port city in Ukraine, is one of the four remaining cities that had bid for the hosting rights. The others are Rome, Busan in South Korea and Riyadh, Saudi Arabia.

Ukrainian President Volodymyr Zelensky says Kyiv is ready for a prisoner exchange with Russia "even tomorrow," as he called on allies to continue to put pressure on Moscow.

"The exchange of people — this is a humanitarian matter today and a very political decision that depends on the support of many states," Zelensky said Monday via videoconference to an audience in Davos.

"It is really important, that the whole world does not beg Russia, no matter the circumstance, or to make concessions to Russia," he said.
"[They must] keep the political pressure on any way they can, through powerful business connections, through the closure of businesses, oil embargo, and through threats, real threats of sanctions, thwarting business, we can actively intensify the exchange of our people for Russian servicemen."

"We do not need the Russian servicemen, we only need ours. We are ready for an exchange even tomorrow," Zelensky said.

Ukrainians have also filled "tens of thousands" of black body bags with the remains of Russian soldiers left behind, he added.

US President Joe Biden says he and Indian Prime Minister Narendra Modi — who has been reluctant to condemn Russia's war in Ukraine — would discuss the "brutal and unjustified" conflict on Tuesday.

Biden and Modi are meeting on the sidelines of the Quad Summit, which is taking place in Tokyo and includes their counterparts from Japan and Australia.

Speaking to reporters, Biden raised the effect the war has had "on the entire global world order."

"The US and India are going to continue consulting closely on how to mitigate these negative effects," Biden said.
"There is so much that our countries can and will do together, and I'm committed to making the US-India partnership among the closest we have on Earth."

India is the only Quad member yet to condemn Russia's actions or impose sanctions on Moscow.

Modi delivered his remarks next, calling Quad meetings "very positive and productive." He praised the US-India relationship as "a partnership of trust" and force for global good, highlighting their "common interests and shared values" as well as economic cooperation.

He did not mention the war in Ukraine.

A quip from Biden: After the two leaders spoke, they continued sitting for a moment to allow press photos — a brief silence broken almost immediately by reporters shouting questions about Russia.

Neither leader answered — but Biden gave Modi a wry look, raised his eyebrows, and said: "Welcome to the American press."

US President Joe Biden's greatest success has been to marshal most of the world against Russia's invasion of Ukraine.

Standing up to authoritarian aggressors for democracies is turning into the main theme of Biden's presidency. He wants to show the world that the US form of government is better than the authoritarian version, where presidents change the rules to give themselves power for decades or for life and where they plot to seize land.

But at home, he faces an arduous task.

He's bent on ensuring that the Ukrainian and Taiwanese people can choose their own leaders in free elections, but a shocking number of Republicans continue to reject his own election victory.

The Senate is so paralyzed by the filibuster, which gives a minority the ability to squash legislation, that no elected leaders seem to be seriously talking about federal legislation to deal with some of the largest American problems. 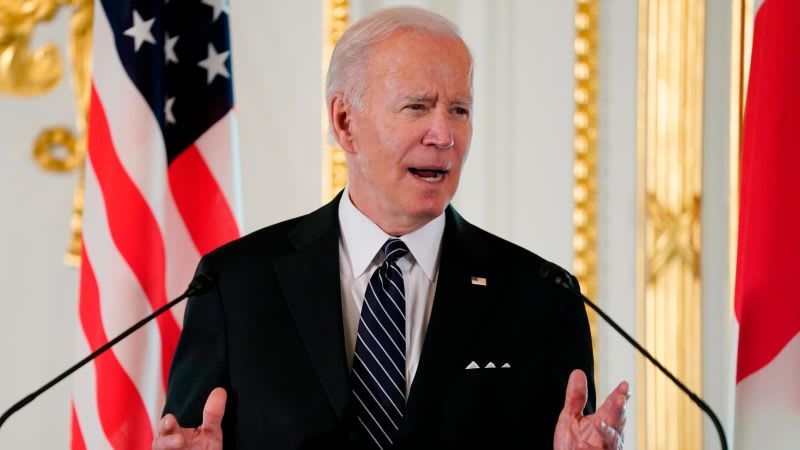 US President Joe Biden said during opening remarks at the Quad Summit with leaders of Australia, India and Japan that “we’re navigating a dark hour in our shared history,” in reference to the war in Ukraine. He described the conflict as “a global issue” and said the US and partners will “lead a global response.”

Here are more of the latest headlines from Russia's war in Ukraine: