Ukraine has reported another missile strike against the Black Sea coastal region of Odesa, causing damage to infrastructure and resulting in a fire.

The Odesa regional military administration said Monday that "as a result of a missile strike by strategic aircraft in the Odesa region, tourist infrastructure was damaged, buildings were destroyed, and a fire broke out."

It said Russia continued to strike the already heavily damaged bridge across the Dniester estuary south of Odesa. Two people were injured.

Some context: Last week, a shopping mall and two hotels were hit by Russian military strikes on Odesa.

Three Kinzhal hypersonic missiles were fired from a plane and and hit a "tourist infrastructure target" a Ukrainian official said.

In Luhansk and Donetsk regions, fighting continues along front lines that stretch for several hundred kilometers. The Ukrainians also report continued fighting in areas in the east, where Russian forces are trying to break through.

The heaviest combat appears to be in two locations: around industrial towns in Luhansk, and in rural areas north of the city of Sloviansk in Donetsk.

The Ukrainian General Staff said Monday that the "enemy focused its main efforts on the Donetsk direction... and is preparing an offensive by forces concentrated in the area of Izium."

The Russians have reinforced their presence around Izium in an effort to push further south, and heavy fighting was reported in the area over the weekend.

The General Staff said that in three frontline areas — Lyman, Bakhmut and Kurakhiv —Russian forces continued to advance and fighting continued. But it also claimed that in another area, Avdiivka, Russian units had retreated.

Russian forces continue to bombard Severodonetsk, according to local officials.

Serhii Hayday, head of the military administration in Luhansk, said that two people in the city had been killed in the most recent shelling. He said there had been heavy bombardment of several towns and villages in the area but Russian forces had been forced to retreat near the town of Borivske to the south of Severodonetsk.

Speaking on Ukrainian television Monday, Vadym Denysenko, an adviser to the Minister of Internal Affairs of Ukraine, said the key area in the Russians' offensive now was around Severodonetsk.

"The Russians are concentrating their forces there. This is the only place where they can have some progress. It will be the hottest area in the coming days," he said. "I hope we will be able to repel them."
Denysenko added that around Izium "Russian attacks are choking" and that further north "the Russians are retreating, blowing up bridges. Our forces are counter-attacking."

CNN has geolocated satellite imagery showing that three bridges west of Russian supply lines to Izium have been destroyed in the past week.

Mariupol: In the south, the General Staff said Russia continues massive artillery and air strikes to block and destroy units trapped at the Azovstal plant in Mariupol.

Several hundred wounded soldiers are trapped at the plant.

In his daily video message late Sunday, President Volodymyr Zelensky said the government continues "very complicated and delicate negotiations to save our people from Mariupol, from Azovstal."

A Ukrainian unit fighting north of Kharkiv says it has reached the Russian border, with the message: "Mr. President, we made it!”

Video released by the unit shows a small group carrying a blue and yellow stake to the border line.

The Ukrainian military said Monday that around Kharkiv "the enemy is concentrating its main efforts on maintaining its positions and preventing the advance of our troops" in the direction of the border.

Some context: Over the past few days, Ukrainian forces advanced toward the border in several places north and east of Kharkiv, the country's second largest city before the invasion began, as Russian forces have withdrawn.

Ukrainian officials said last week they were liberating villages on the outskirts of the city. Their advances threaten the symbolic embarrassment of expelling the Kremlin's forces back to their own border while posing the strategic threat of cutting Russia's supply lines into Ukraine and its forces further south in the Donbas region.

When masked Russian soldiers ransacked Nina’s home in northeastern Ukraine at 6 a.m. one day in late April, they were not searching for weapons. Instead, they were looking for her Ukrainian textbooks.

The troops held her husband and daughter at gunpoint, but the 48-year-old told CNN she knew it was her they’d come for. As a school principal, she believes they saw her as the enemy.

“They were searching everywhere, even the drains and outdoor toilet,” she explained. “They found schoolbooks and tutorials for Ukrainian language.”

Nina is not alone. Ukrainian officials say educators in newly Russian-occupied areas of the country have reported increasing cases of intimidation, threats and pressure to adapt school programs to align with pro-Russian rhetoric.

As the war rips through Ukraine, education has become a victim of the conflict — and a potential battlefield in the fight for control of the country.

Before Russian troops invaded on February 24, around 4.23 million students were enrolled in schools across the country, according to data compiled by Ukraine’s Institute of Educational Analytics, a state agency. Now, millions of school-age children have been internally displaced or forced to flee abroad with their families. 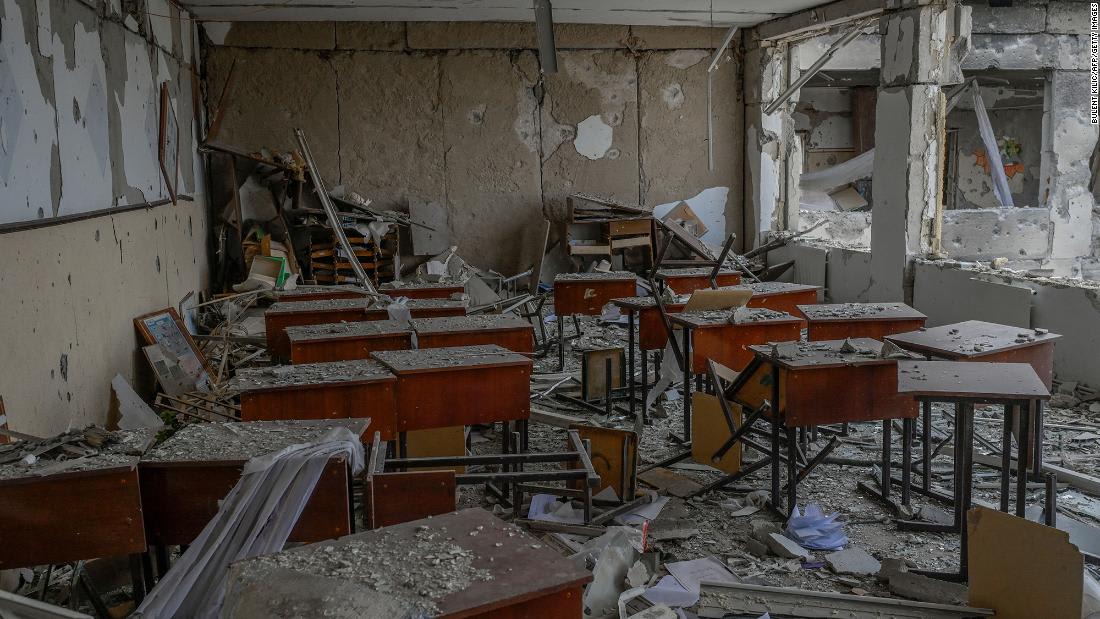 As fighting continues in the eastern regions of Luhansk and Donetsk, Ukrainian forces say they are making headway in the northeastern Kharkiv region. Meanwhile, two Nordic nations may soon be applying to join NATO — ditching longstanding neutrality.

US Secretary of Defense Lloyd Austin on Sunday “reiterated the unwavering US support for Ukraine’s sovereignty and security assistance efforts” with the country’s defense minister, Oleksii Reznikov, and provided an update of his call with their Russian counterpart, according to the US Department of Defense.

Austin spoke with Reznikov “to discuss the situation on the battlefield and Ukraine’s capability needs,” according to a department readout.

Austin relayed to Reznikov his correspondence with Russian Defense Minister Sergei Shoigu on Friday “in which (Austin) urged an immediate end to the conflict in Ukraine and emphasized the importance of maintaining lines of communication.”

“Secretary Austin reiterated the unwavering US support for Ukraine’s sovereignty and security assistance efforts to bolster Ukraine’s capacity to counter Russian aggression,” the readout concludes, adding the two pledged to remain in contact.

The Ukrainian military has claimed that Russian units have "suffered significant losses in manpower and equipment" as they try to advance westwards to the borders of Luhansk and Donetsk regions, according to a spokesman for the General Staff of the Armed Forces.

"In some areas, the staffing of [Russian] units, as a consequence of hostilities, is less than 20%," the armed forces general staff said late Sunday.
"In the Popasna direction, due to heavy losses and the inability to act independently, airborne troops of the armed forces of the Russian Federation are teaming up with representatives of Russian private military companies for further action," claimed Oleksandr Shtupun, the general staff spokesman.

The ruins of Popasna fell to Russian forces earlier this month but they appear to have taken little ground in the area since.

The Russians have also been trying to push south from Izium for several weeks, and the general staff said Sunday that they were trying unsuccessfully to conduct offensive and assault operations towards two villages south of the town

The military also said that Russian forces north and east of the city of Kharkiv were trying to defend their positions to "prevent the advance of our troops to the State Border of Ukraine," while continuing to shell towns and villages recently recaptured by Ukraine.

"We Social Democrats consider that the best for Sweden and the Swedish people’s security is that we join NATO. This is a decision that we have made after very careful consideration," Andersson said during a press conference on Sunday.

Andersson noted this decision reverses a stance the country has taken for 200 years, leaving "a political line of security policies that we have had in different shapes and forms."

"For us Social Democrats, the military non-alliance policy has served us well. But our analysis shows that it will not serve us as well in the future," Andersson said. "This is not a decision that we have taken lightly."

The prime minister said the country must "adapt to reality" and make decisions based on the current climate.

"It is very clear that there is a before and after the 24th of February 2022. Europe, Sweden and the Swedish people are living in a new, dangerous reality. The European security order that Sweden has based its security policies on for centuries, that is now under attack,” Andersson said.

This expected announcement follows suit after Finland announced Sunday its decision to apply to join NATO, after both countries have previously refrained from joining for historic and geopolitical reasons.

Earlier on Sunday, Sweden's Social Democratic Party had released a statement on its website saying it has decided the country should work toward a Swedish application to join NATO.

The statement continues to say that the party should, in case the application is granted by NATO, work to state unilateral conditions against the placement of nuclear weapons and permanent bases on Swedish territory.

Swedish Foreign Minister Ann Linde called it "a historic decision" in a tweet.

Finland's government said Sunday it intends to join NATO, ditching decades of neutrality and ignoring Russian threats of possible retaliation as the Nordic country attempts to strengthen its security following the onset of the war in Ukraine. Sweden's ruling party later said it will also support joining the alliance.

The decision was announced at a joint press conference by President Sauli Niinistö and Prime Minister Sanna Marin, who said the move must be ratified by the country's parliament before Finland can formally seek membership of the alliance.

"We hope that the parliament will confirm the decision to apply for NATO membership," Marin said in Helsinki on Sunday. "During the coming days. It will be based on a strong mandate, with the President of the Republic. We have been in close contact with governments of NATO member states and NATO itself."
"We are close partners to NATO but it is a historic decision that we will join NATO and hopefully we are making the decisions together," she added.

The move would bring the US-led military alliance up to Finland's 830-mile border with Russia, but could take months to finalize as the legislatures of all 30 current NATO members must approve new applicants.

It also risks provoking the ire of Russia, whose president, Vladimir Putin, told his Finnish counterpart Niinistö on Saturday that abandoning military neutrality and joining the bloc would be a "mistake," according to a Kremlin statement. On Saturday, Russia cut its electricity supply to the Nordic country following problems in receiving payments. 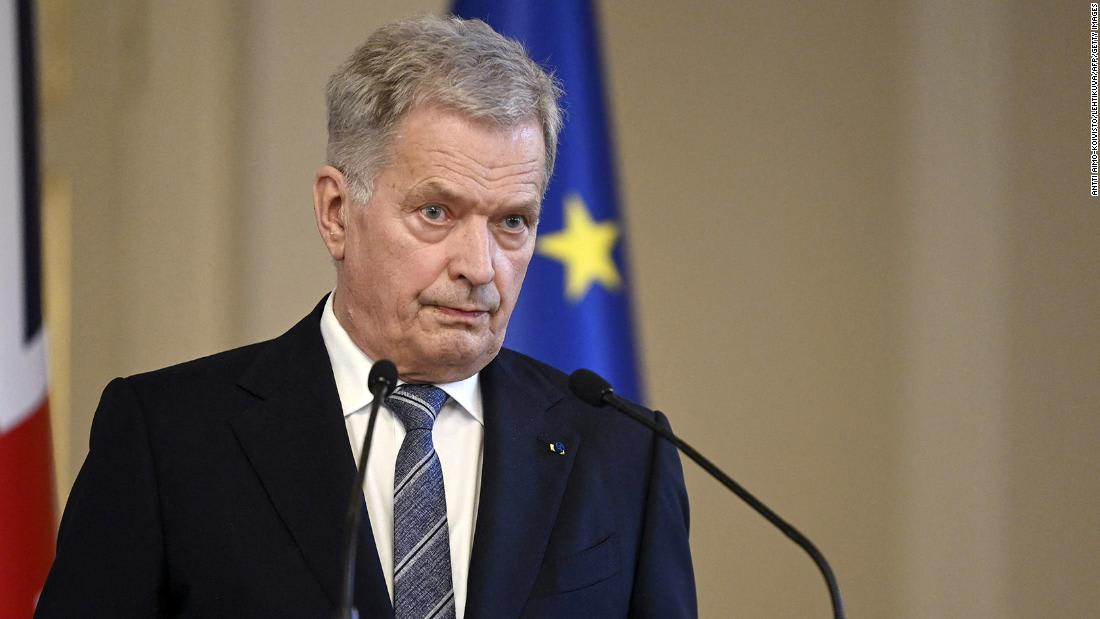 Finland will apply to join NATO, ditching decades of neutrality despite Russia's threats of retaliation