The European Union will provide $521 million (€500 million) in military support to Ukraine, according to the bloc's chief diplomat Josep Borrell.

''We will provide a new tranche of 500 more millions in military support to Ukraine," the EU's High Representative for Foreign Affairs and Security Policy told reporters on his way into a meeting of G7 foreign ministers in Weissenhaus in Germany on Friday.

The G7 will also ''put more pressure on Russia'' in terms of economic sanctions, according to Borrell. The diplomat said he was ''optimistic" that a deal can be reached on an EU embargo on Russian oil imports, stressing the need to "get rid of the oil dependency on Russia.''

The group of the world's richest nations are also set to discuss wartime disinformation and rising energy and food prices, Borrell said.

He added that when it comes to dealing with Russia, the G7 will ''present a united front'' and "come out with a strong message.''

''It is very important at this time that we keep up the pressure on Vladimir Putin by supplying more weapons to Ukraine, by increasing the sanctions," Truss said, speaking on her way into a meeting of The Group of Seven (G7) Foreign Ministers in Weissenhaus, Germany.

The foreign minister said ''G7 unity has been vital during this crisis to protect freedom and democracy," referring to relations between, the UK, Canada, France, Germany, Italy, Japan, and the United States.

Truss is set to meet the EU's High Representative for Foreign Affairs and Security Policy, Josep Borrell as part of Friday's G7 events.

Azovstal has been under constant shelling from Russian forces for about two months and while a Ukrainian officer inside the facility said that all trapped civilians have likely been evacuated, Ukrainian fighters continue to hold out.

"In order to establish full control over the city and suppress the resistance of Ukrainian defenders, it uses strategic aviation. Given the evacuation of the local residents, increase of the firing should be expected in the near future," the General Staff said.

Zaporizhzhia: In the south, the regional administration in Zaporizhzhia said there are signs the Russians are trying to reinforce their units by bringing in more equipment and troops. It said a new Russian contingent had arrived in Mykhailivka, just south of current frontlines.

Enerhodar: In the nearby city of Enerhodar, occupied by Russian forces since early March, the regional administration reported on Friday that, "The city is almost out of medicine, and humanitarian aid is not always available." Enerhodar residents, it said, are "already afraid to go to protests and organize rallies" because of constant patrols and intimidation by Russian soldiers.

In his daily address on Thursday, President Volodymyr Zelensky said the Russian offensive was hiding behind missile, air and artillery strikes.

"Russia's strategic defeat is already obvious to everyone in the world and even to those who still continue to communicate with them. Russia simply lacks courage to admit it so far. They are cowards," Zelensky said.
"Therefore, our task is to fight until we achieve our goals in this war. "

A Ukrainian counterattack in the north continues to disrupt Russian supply lines.

Russian forces "did not conduct offensive operations in the Kharkiv direction. The main efforts were focused on preventing the advance of our troops in the area of ​​the settlement of Vesele," the Ukrainian General Staff said on Friday.

The Ukrainians have taken a number of villages in this area east of Kharkiv.

CNN reported early on Friday that at least three bridges in the area had been demolished, according to satellite imagery. It seems likely that Russian units destroyed the bridges in an effort to protect their supply lines from further Ukrainian advances.

Elsewhere in Kharkiv region, the Russians appear to be using artillery sporadically but with deadly effect.

On Thursday, shelling of the town of Derhachi killed two people, according to the local administration, and destroyed the humanitarian center and medical facilities.

Derhachi is about 10 miles (16 kilometers) north of Kharkiv, which is Ukraine's second-largest city.

After weeks of resistance, Ukrainian troops have pulled back from the city of Rubizhne in Luhansk region, according to multiple reports from the area.

Video from the city shows intense fighting in its industrial outskirts on Thursday.

A bridge linking Rubizhne with neighboring Severodonetsk has been destroyed, suggesting the Ukrainians are taking up new defensive lines.

There has been no official confirmation from the Ukrainian General Staff that Ukrainian troops have left the outskirts of Rubizhne.

The General Staff reported on Friday only that "the enemy continues to focus its efforts on establishing full control over the settlement of Rubizhne," a description repeated by the regional military administration.

Ukrainian officials reported earlier on Thursday that a nearby town had fallen to advancing Russian forces. And in its latest analysis, the Institute for the Study of War said that "Russian forces likely control almost all of Rubizhne as of May 12, and have likely seized the town of Voevodivka, north of Severdonetsk." 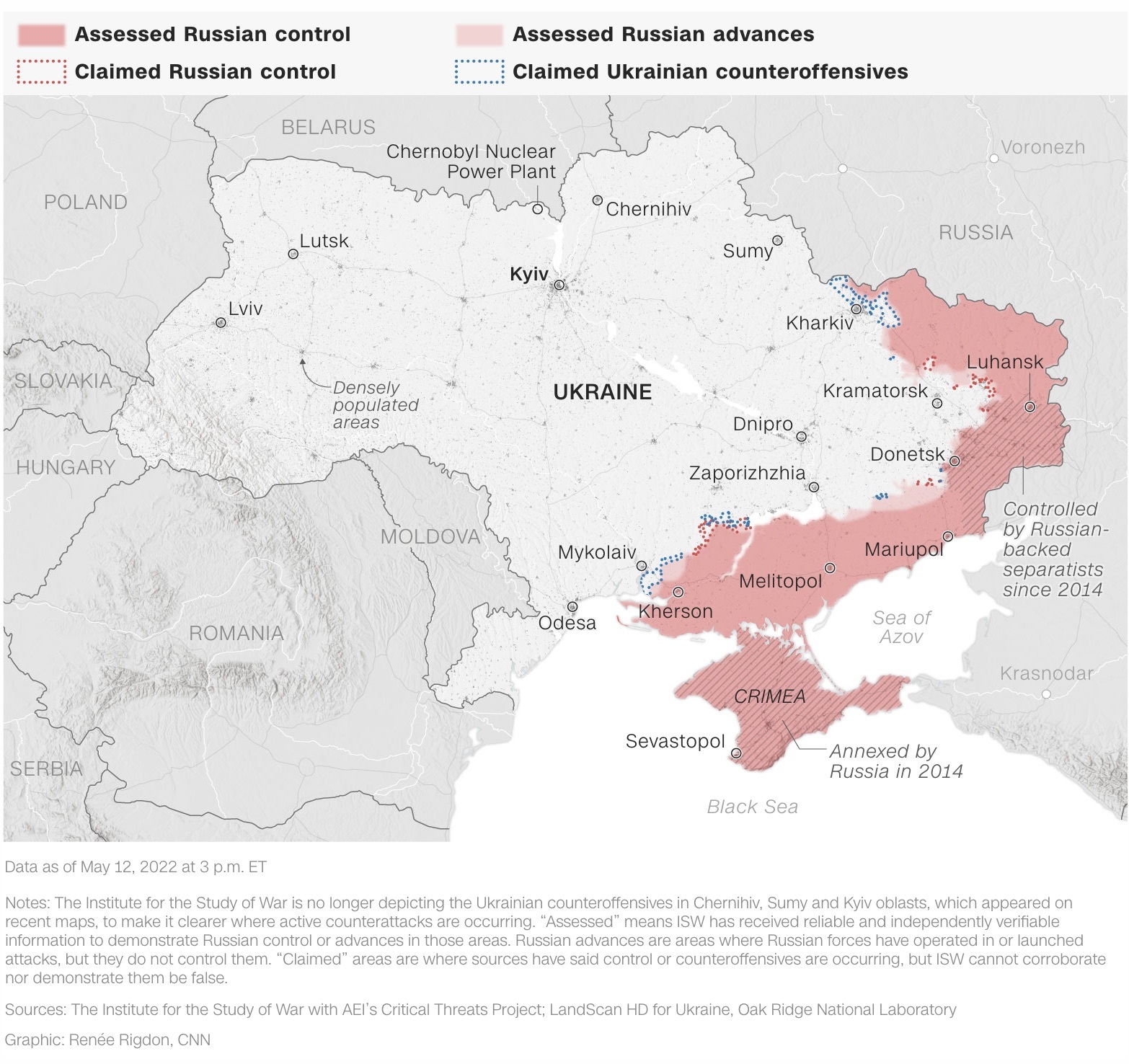 Ukrainian troops continue to defend Severodonetsk, which has been pummelled by Russian shelling and air attacks for weeks. Some 15,000 civilians are still thought to be in Severodonetsk, out of a pre-war population of 100,000. The city is more than 70% destroyed according to the local government.

"Evacuation is suspended because it is impossible to drive on a road that is constantly being shelled. As soon as the situation stabilizes, the evacuation will resume," said the head of the Severodonetsk Military-Civil Administration Oleksandr Stryuk on Thursday.

Satellite images of the Azovstal steel plant in Mariupol show the extent of the destruction the Russian bombardment has had on the complex.

The images from Maxar Technologies, taken on May 12, show the heavily damaged plant from above.

Azovstal has been under constant shelling from Russian forces for about two months.

Prior to evacuation efforts, hundreds of civilians had been sheltering in the complex along with the last remaining Ukrainian defenders of the city.

A Ukrainian officer inside the facility said on Thursday that all the trapped civilians have likely been evacuated, though he added it was difficult to make a full assessment of the situation across the plant given the constant shelling.

Ukraine's Deputy Prime Minister Iryna Vereshchuk said on Thursday that "very difficult negotiations" are ongoing on the evacuation of seriously wounded fighters from the plant in exchange for Russian prisoners of war.

There are thought to be several hundred soldiers still at Mariupol’s last Ukrainian stronghold.

Their families have sent an emotional appeal to Turkish President Recep Tayyip Erdogan, urging him to "be a hero" and initiate an extraction procedure for all remaining fighters at the plant.

As the Russian forces retreated due to a sustained Ukrainian counteroffensive in the Kharkiv region, three bridges vital to continuing the Ukrainian advance were blown up, satellite images from BlackSky and the European Space Agency show.

The images from Black Sky, taken on May 12, show collapsed sections of the bridges crossing the Siverskyi Donets River near the villages of Rubizhne and Staryi Saltiv, which are about 10 miles south of the Russian border.

The village of Rubizhne is near Staryi Saltiv, although it shares the same name with the city further south in Luhansk.

The villages were recently liberated by Ukrainian forces.

Another satellite image, taken on May 8, by the European Space Agency shows the bridge across the Pecheneg hydroelectric power station — the nearest bridge to the south — has also been blown up.

There are only two smaller bridges to the north, in the currently Russian-occupied villages of Ohirtseve and Buhrukuvatka, which cross the river. Their current status is unknown, as clouds have obscured any recent satellite imaging.

Why the bridges are important: If those bridges are compromised, the momentum of the Ukrainian advance will be significantly hampered.

It's not just momentum that's important for the Ukrainian forces. Major Russian supply lines, which are vital to the Russian military advance near the city of Izium and into the Luhansk region, are just east of the Siverskyi Donets River in the Kharkiv region.

While it's not entirely clear when the bridges were blown, or who is responsible for doing so, it's unlikely the Ukrainians are responsible for their destruction. The bridges are just too vital to their counteroffensive, and to targeting the supply lines.

Two battlegrounds are emerging in Ukraine, with the Russians trying to take the Luhansk and Donetsk regions, while the Ukrainians are trying to both hold them back and cut them off. And the boundaries of one river in the east are hindering both sides.

Here are the latest updates on the war in Ukraine:

A new satellite image from Maxar Technology appears to show a missile strike Thursday near Snake Island, in southern Ukraine.

Two plumes of smoke are seen near to a Russian Serna-class landing ship in the Black Sea, identified by Maxar.

The ship appears to be making a sharp turn where the missile hits the water.

Near the island, a barge with a heavy-lift crane is seen next to another sunken vessel, which Maxar has also identified as a Serna-class landing ship.

It's unclear how the ship sank, but on Sunday, spokesman for Odesa region military administration Serhiy Bratchuk said that a landing boat was hit, in addition to two Raptor-class patrol boats.

Bratchuk also claimed the Ukrainian military had destroyed a Russian helicopter on the island. The Ukraine Armed Forces Southern Operational Command released video showing a helicopter being destroyed by a missile on Sunday.

In recent weeks, the Ukrainians have repeatedly — and successfully — destroyed Russian forces and vehicles on the island.

Bratchuk claimed on Thursday that a Russian support ship, the 'Vsevolod Bobrov' was on fire and being towed to Sevastopol from the area of Snake Island. That support ship is not seen in this satellite image, and the claim remains unverified by CNN.

So far Russia has not confirmed the loss of any of the ships mentioned.