The head of the self-declared Donetsk People's Republic (DPR), Denis Pushilin, has said that he plans to make Mariupol into a resort town.

"Russia is here forever, and you are finally home. Now this is the territory of the Donetsk People's Republic forever. No one will take it away from us," Pushilin said after attending events to mark Victory Day.

"We have strength, we have opportunities, we have the support of the biggest beautiful country — Russia," Pushilin told Mariupol residents according to the Russian state news agency TASS. "The task is to make Mariupol a resort city, which has not been possible to do before."

Pushilin said the Azovstal steel plant, where hundreds of Ukrainian soldiers remain, had "negatively affected the ecology of the city."

"If Azovstal is not restored, then we will make a resort town," Pushilin said, explaining it would create additional jobs and bring income to the city.

Pushilin said the DPR is "faced with the task of regaining control over its territories, and then the republic will decide on its future."

"As soon as we reach the constitutional borders of the Donetsk People's Republic, these are the borders of the former Donetsk region, we will make the decision ... Now the main task is to liberate all of our lands, to start rebuilding cities," he added.

On Feb. 21, Russian President Vladimir Putin announced that Moscow recognized the sovereignty of the DPR and the Luhansk People's Republic.

During a speech commemorating Russia's defeat of Nazi Germany at the end of World War Two, Russian President Vladimir Putin reiterated his baseless accusation that the West left him no choice but to invade Ukraine. Planned Victory Day air shows across Russia were canceled, raising questions as to why.

The speech provided little detail on how Russia planned to proceed in Ukraine. It followed days of speculation that the Russian leader would use the event to formally declare war on Ukraine, or order a mass mobilization of Russian forces to prosecute a war that has now stretched into its third month, with heavy Russian losses.

Here are some of the latest developments:

Russian Ambassador to Poland Sergei Andreev was doused with red paint while trying to lay a wreath at the cemetery of Soviet soldiers in Warsaw, Russian state news agency RIA Novosti reported on Monday.

According to RIA Novosti, Poles and Ukrainians blocked the diplomat's path. Andreev was accompanied by police out of the cemetery. He later said that he was not injured.

“We still need to figure it out. Maybe just a scratch, but neither I nor the team were seriously injured,” Andreev said, as cited by RIA Novosti.

Referencing the incident, Russian foreign ministry spokeswoman Maria Zakharova alleged via Telegram that "fans of neo-Nazism have once again showed their face - and it is bloody."

“The demolition of monuments to the heroes of the Second World War, the desecration of graves, and now the disruption of the flower-laying ceremony on a holy day, celebrated by every decent person, proves the obvious - the West has set a course for the reincarnation of fascism,” she said.

The Russian Embassy in Poland said it would protest against the attack on the ambassador.

"We will make a formal protest, although I believe that the authorities were notified of our plans. When they did not recommend us to hold a wider event we met them halfway and did not aggravate. All that was left is to ensure elementary order, it would seem," said Andreev, as cited by RIA Novosti.

See the moment the Russian Ambassador to Poland was doused with red paint here:

Ukrainian officials have raised the alarm about a Russian pontoon bridge that was erected a few days ago and may now enable Russian forces to threaten Ukrainian defenses and supply routes in the Luhansk region.

Serhiy Hayday, head of the Luhansk regional military administration, said Monday that the Russians were trying to take away "the road of life," which connects the front lines in the east around Severodonetsk with the town of Bakhmut, an important rear base.

"The Russians transported equipment to the other shore via a pontoon across the Siversky Donets river," Hayday said.

"If they consolidate, they will be able to develop an offensive and get closer to the road, cutting off Luhansk region.
"This will mean the loss of the single path to security, and connection with other regions."

CNN has confirmed satellite imagery showing a pontoon bridge across the Siversky Donets on Sunday. There had been no such bridge on May 3. 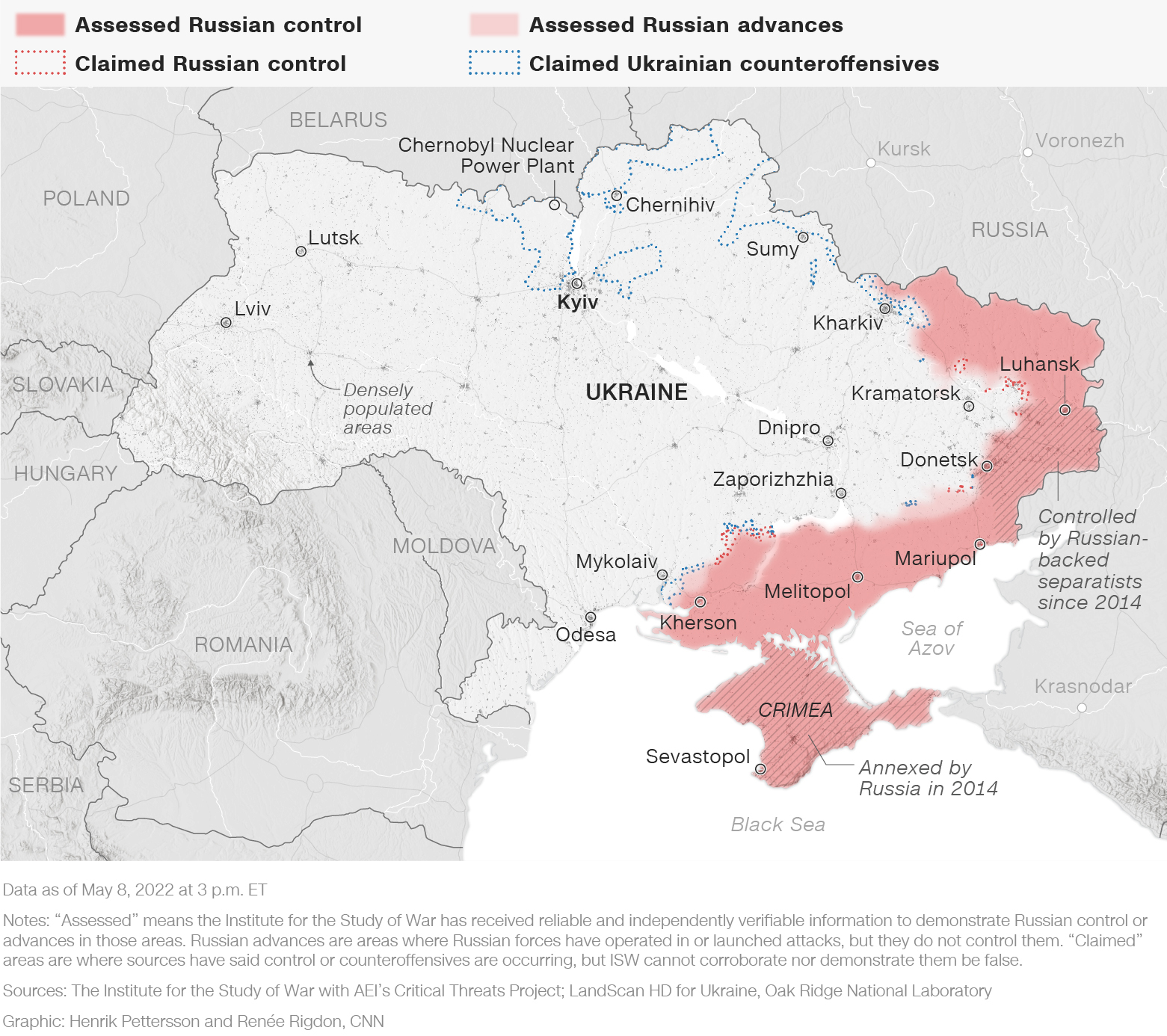 The location of the bridge is less than two miles from the village of Bilohorivka, which was bombed by Russian aircraft on Saturday.

The school in the village, where 90 people were taking shelter, was hit and about sixty people are thought to have been killed.

Rescue efforts have since been hampered by continued shelling.

It now appears that the bombardment was to prepare for an attempted ground advance by Russian forces.

It's unknown how far Russian forces have progressed if they have crossed the river.

The decision raised eyebrows among foreign military analysts watching Moscow's Victory Day parade on Monday. The parade had been expected to feature 77 aircraft flying over the capital's Red Square, including eight MiG-29 fighters flying in a “Z” formation to show support for Russian troops fighting in Ukraine.

Sounds unbelievable. It seemed sunny on what I saw. The only excuse would be strong crosswinds at the air bases the aircraft were coming from," Peter Layton, a fellow at the Griffith Asia Institute in Australia and former Australian air force officer, told CNN.

During the parade in Moscow, winds were sustained at around 15 mph, with gusts reported at around 30 mph at 11 a.m. local time. The cloud cover was also increasing throughout the morning with mostly cloudy skies during the parade, according to CNN Meteorologist Monica Garrett.

The only air parade scheduled in Russia's south, which was due to be held in the city of Rostov-on-Don, did not take place, TASS said, citing the press service of the Southern Military District.

United States first lady Jill Biden met with the President of Slovakia Zuzana Caputova at the Presidential Palace in Bratislava on Monday.

The two discussed the US's continued support of Ukraine, with Biden expressing gratitude for the way Slovakia has welcomed refugees, according to a White House official.

Upon arrival at the Great Hall palace reception room, Biden first signed a guest book with this message:

During my time in this beautiful country, I have seen firsthand the shared values that united Slovakia and the United States as friends, partners, and allies. This includes our common devotion to helping those most in need. We stand with Slovakia as it stands with the people of Ukraine.”

Biden, who made an unannounced visit to Ukraine on Mother's Day, told the media she had spoken to US President Joe Biden afterward.

“I said just how much I saw the need to support the people of Ukraine and … the horrors and the brutality that the people I had met had experienced,” said Biden of their conversation.

Following her departure from the palace, Biden traveled to the airport for the flight back to Washington, ending her four-day European trip.

Russian President Vladimir Putin offered very few clues on the direction of the Ukraine conflict in his speech at Russia's Victory Day commemorations on Monday.

Global leaders and defense officials had spent weeks speculating over what he might reveal about his plans, with some suggesting that he may use this historic day to escalate his so-called "special military operation" and declare an outright war.

Instead, the Russian president used his speech to blend history with the present, banking on Russian nationalism on its most patriotic of holidays to justify his war.

The question now is whether Putin will use this day – or this week even – to escalate the war in other ways. 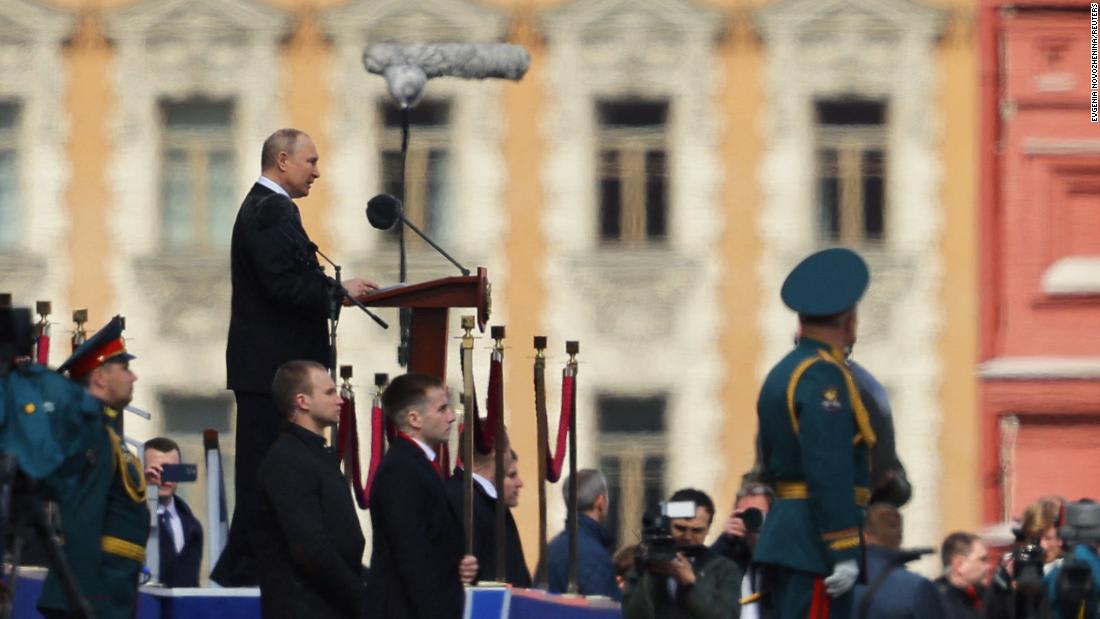 Among the reasons for Russia’s invasion of Ukraine was that the NATO alliance was surrounding Russia and putting bases in its western neighbor, Putin said.

NATO accounts for 6% of his land border. That’s not being surrounded if only 6% of your land border is NATO countries,” the UK defense secretary said.

I think he is believing what he wants to believe – a slight shine of desperation,” Wallace said of Putin.

Earlier, in a speech at the British National Army Museum, Wallace reiterated London’s strong support for Kyiv in the war.

“The British government – the whole United Kingdon – stands in solidarity with Ukraine, supporting their courageous defense of sovereignty, territorial integrity and simple right to a peaceful and prosperous future,” Wallace said.

Vladimir Putin seems like he’s “completely out of ideas” about the war in Ukraine, one prominent analyst said after the Russian President’s Victory Day speech in Moscow on Monday.

Either doesn’t now understand the reality of the situation in Ukraine, or willfully ignoring it,” Phillips O’Brien, professor of strategic studies at the University of St. Andrews in Scotland, said of Putin in a Twitter post.

Some context: Speculation before the speech was that Putin might formally declare war on Ukraine or order a mass mobilization of Russian forces to prosecute the war that has now stretched into its third month, with heavy Russian losses.

While Putin blamed NATO and the West for forcing him to invade Ukraine to protect Russian interests, he didn’t offer any idea of what would be considered a victory or any ways to prosecute the war further.

Without concrete steps to build a new force, Russia can’t fight a long war, and the clock starts ticking on the failure of their army in Ukraine,” O’Brien said.