Russia may have invaded Ukraine on Feb. 24, but President Vladimir Putin has insisted that his troops are carrying out a "special military operation" instead of declaring war.

However, Western officials and analysts believe that could change on May 9, a symbolic day for Russia, with a formal declaration of war that will pave the way for Putin to step up his campaign.

May 9, known as "Victory Day" inside Russia, commemorates the country's defeat of the Nazis in 1945.

It is marked by a military parade in Moscow, and Russian leaders traditionally stand on the tomb of Vladimir Lenin in Red Square to observe it.

"May 9 is designed to show off to the home crowd, to intimidate the opposition and to please the dictator of the time," said James Nixey, director of the Russia-Eurasia Programme at Chatham House told CNN.

Western officials have long believed that Putin would leverage the symbolic significance and propaganda value of the day to announce either a military achievement in Ukraine, a major escalation of hostilities — or both.

The Russian president has a keen eye for symbolism, having launched the invasion of Ukraine the day after Defender of the Fatherland Day, another crucial military day in Russia.

Putin has many options on the table, according to Oleg Ignatov, senior analyst for Russia at Crisis Group. "Declaring war is the toughest scenario," he said.

Meanwhile, Ukrainian President Volodymyr Zelensky — who has not formally declared war on Russia — imposed martial law in Ukraine when the Russian invasion began in late February.

That would allow the government not just to assemble troops but also to put the country's economy on a war footing.

Mobilization could mean extending conscription for soldiers currently in the armed forces, calling on reservists or bringing in men of fighting age who have had military training, said Ignatov.

But it represents a big risk to Putin's government, he said. 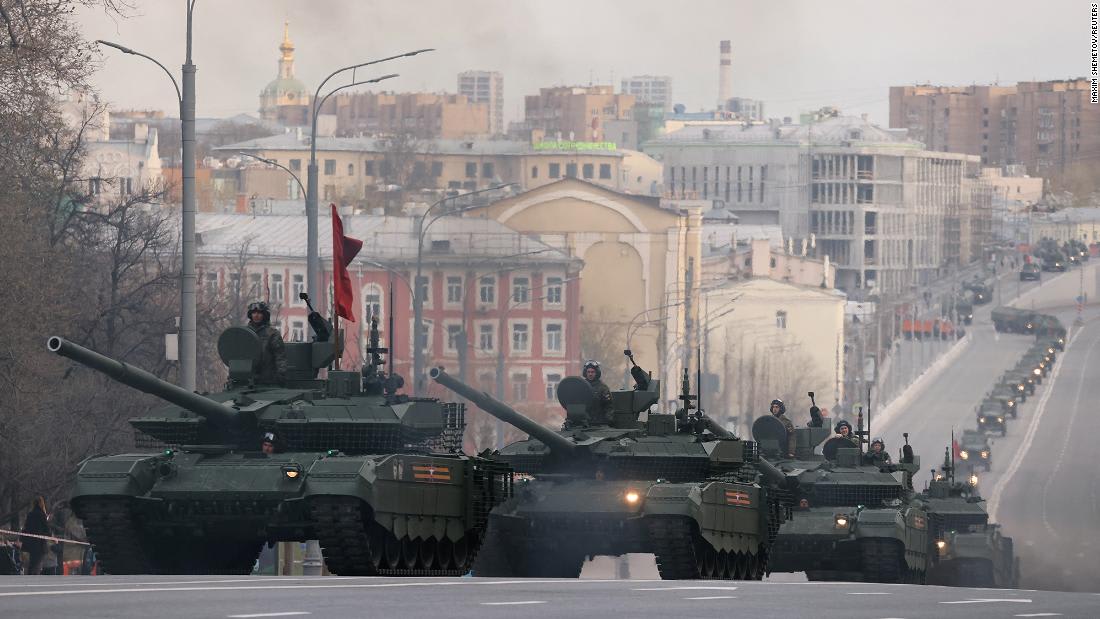 Why May 9 is a big day for Russia, and what a declaration of war would mean

After CNN teams in the western Ukrainian city of Lviv heard several blasts in the past hour, Ukrainian Railways said that a number of trains have been halted around Lviv because of Russian attacks on railway power substations.

A number of trains will run with a delay, it said.

"In particular, trains have been detained at the entrance to Lviv, information is being updated," according to Ukrainian Railways.

Lviv Mayor Andrii Sadovyi said that parts of the city are without power. Sadovyi also said that "as a result of the missile strikes, two power substations were damaged."

"Everyone stay in the shelters," he said in a brief Telegram post.

From another site, further away, a huge plume of black smoke could be seen billowing across the sky.

Smoke continues to drift across the city, with the largest fire burning to the west of the city center.

Traffic that had come to a standstill immediately after the strikes began to move about 45 minutes later.

An eyewitness who spoke to CNN said they "saw the missile flying close by; I thought it was a plane" but then they heard a "loud explosion."

"I was worried that people were injured, so we quickly took a car and drove there, because the sound of the explosion was very loud. We took shovels, buckets, axes and quickly went there," the eyewitness said.

"We thought maybe they hit houses, but they hit the electricity substation. It is located near the railway tracks. Then we heard the second explosion; it was the explosion of the [substation's] transformer. The fire was getting bigger, we saw the police, we showed them the direction, we showed them where the road is. Now the fire trucks are arriving."

The bodies of 290 civilians have been recovered in the town of Irpin, outside of Kyiv, since the withdrawal of Russian forces, Irpin Mayor Oleksandr Markushin said Tuesday.

In a statement on Facebook, Markushin said 185 of the dead have been identified, the majority of whom were men. The cause of death was “shrapnel and gunshot wounds.”

According to Markushin, at least five of the dead suffered brain injuries and starvation. Five residents were shot dead in the yard of a high-rise building and at the premises of a children's development center.

Russian forces deported almost 40,000 people from Mariupol to Russia or the breakaway Donetsk People's Republic, Mariupol Mayor Vadym Boichenko said during a briefing at the Ukraine-Ukrinform media center on Tuesday.

"We have already verified the lists of those who were deported from Mariupol to Russia or the so-called DPR. Almost 40,000 people. Now they have begun to hide these lists. Unfortunately, we are not able to verify everything at the moment, but we are continuing the work," said Boichenko.

Russian military "takes the local population to the outskirts of Russia, to the Far East, or to Siberia and there they use them for various jobs," Boichenko said, adding that Mariupol residents are issued a certificate of resettlement and are involved in "humiliating work."

French President Emmanuel Macron had a call with his Russian counterpart Vladimir Putin that lasted over two hours, the Élysée Palace said Tuesday.

Macron warned Putin of the consequences of the war in Ukraine and called for an end to the “devastating aggression,” according to a statement from the Elysée Palace. Macron also “expressed his deep concern about Mariupol" and the situation in the Donbas region, it added. He also "called on Russia to allow the further evacuation of the Azovstal factory," according to the statement.

According to the Kremlin, Putin told Macron about the progress of "the special operation to protect Donbas" and evacuation of civilians "held by the nationalists" from the Azovstal plant in Mariupol, using terms to justify his invasion of Ukraine.

Putin underlined that despite the "unpreparedness" of Kyiv authorities, Moscow is still open for dialogue.

According to the Kremlin statement, Macron raised the issue of ensuring global food security. Putin in response said that the situation is complicated by the sanctions imposed by the Western countries.

United States Chairman of the Joint Chiefs of Staff Gen. Mark Milley said the world is witnessing "the greatest threat to peace and security of Europe and perhaps the world” in decades due to the invasion of Ukraine.

Milley said the US is “at a very critical and historic geo-strategic inflection point,” where the US military must “maintain readiness and modernize for the future” at the same time.

“If we do not do that, then we are risking security of future generations,” Milley added.

He told lawmakers the world is becoming “more unstable” during his opening statement at a Senate Appropriations Subcommittee hearing on the Defense Budget on Tuesday.

“The potential for significant international conflict between great powers is increasing, not decreasing,” Milley said.

Many gas stations across the Ukrainian capital of Kyiv are closed due to the lack of fuel in the country.

Those stations that do remain open have long lines of cars waiting outside in snaking lines, with the average wait time at least an hour.

“This is not normal. I spend more time thinking about how to find fuel than I spend trying to find customers," a local taxi driver told CNN.

“There are fewer people in Kyiv than before so fewer customers for my taxi.”

As well as restricting travel, the lack of fuel is also having an impact on local business owners trying to keep their companies afloat.

“We need diesel for production, and gasoline for our deliveries. Both are an issue at the moment," said the owner of a coffee roasting business. “I am not sure that we will be able to make deliveries today because we’ve had to wait in this line for so long.”

"I searched everywhere, there is no gas at any station in Kyiv, we are very lucky that we found it here.”

Some background: Ukrainian President Volodymyr Zelensky last week said fuel shortages will be stopped despite Russian attacks damaging a number of oil depots across the country.

In a statement last week, Economy Minister Yulia Svyrydenko said the shortages would be eliminated within a week, after operator's had secured contracts with European suppliers.

Meanwhile, authorities in Kyiv have urged people not to use their cars in order to save fuel for the military.

CNN spoke to some evacuees from Mariupol's embattled Azovstal steel plant as they arrive in Ukraine-controlled Zaporizhzhia.

An elderly woman who emerged from a bus was carrying small amounts of medicine, a plastic cup, a toothbrush, a tissue paper — the things she was living off over the past weeks.

"I have nobody here. I don't know where to go now," she told CNN.

She had been sheltering in Azovstal for weeks and hadn't seen the sun in days.

"You can see in the exhaustion of her face. And you can see the head torch around her neck. She's clearly been living in the dark," CNN's Nick Paton Walsh reported.

Not having seen the sunlight in days meant she was now having some difficulty seeing, he added.

Civilians evacuated from the Azovstal steel plant in Mariupol have arrived in Zaporizhzhia.

CNN's team saw the arrival of five buses with evacuees and witnessed emotional scenes, as the evacuees emerged from the buses and were greeted by volunteers.

After getting off the buses, the evacuees are heading to tents that the Ukrainian government has set up to help them with the next part of their journey.

The UN Office for the Coordination of Humanitarian Affairs says that civilians evacuated from Azovstal steel plant in Mariupol have reached safety in Zaporizhzhia.

"We'll continue to engage parties to the conflict & do all we can to support safe passage for civilians trapped in war-impacted areas," the OCHA said.

The UN's Humanitarian Coordinator in Ukraine, Osnat Lubrani, said she was "relieved to confirm that the safe passage operation from Mariupol has been successful."

"The people I travelled with told me heartbreaking stories of the hell they went through. I'm thinking about the people who remain trapped. We will do all we can to assist them," she tweeted.

The International Red Cross also confirmed the safe arrival of the convoy.