The US believes Ukraine can win the war against Russia with “the right equipment and the right support,” Secretary of Defense Lloyd Austin told reporters Monday, from an undisclosed location in Poland near the Ukrainian border.

Some context: Austin and US Secretary of State Antony Blinken made an unannounced trip to Kyiv on Sunday where they met with Ukrainian President Volodymyr Zelensky and other Ukrainian officials, making them the highest-level US officials to have traveled to the country since Russia's invasion began.

Zelensky's office issued a statement following a meeting in Kyiv between the Ukrainian leader, the US Secretary of State Antony Blinken and US Secretary of Defense Lloyd Austin.

"I would like to thank President (Joe) Biden personally and on behalf of the entire Ukrainian people for his leadership in supporting Ukraine, for his personal clear position. To thank all the American people, as well as the Congress for their bicameral and bipartisan support. We see it. We feel it."

"We understand what the next steps on this track should be. And we count on the support of our partners," Zelensky said, according to the statement.

Maksym Kozytskyy, the head of the Lviv regional military administration in western Ukraine, said anti-aircraft defences had been engaged as he urged residents to shelter.

In a separate statement, Kozytskyy said fires had broken out in two settlements in Zolochiv district.

The situation is under control. Details later. Stay in the shelters," he said.

US Secretary of State Antony Blinken said he and Defense Secretary Lloyd Austin spent about three hours with Ukrainian President Volodymyr Zelensky and his senior team in the capital Kyiv.

"That was the entire focus of our visit. We wanted to focus on the work that needed to be done in looking at the game plan that we have, how we're moving forward across all of these different lines of effort," Blinken told reporters from an undisclosed location in Poland near the Ukrainian border.

Asked by a reporter what they had seen on their way to the capital, Blinken said they had taken a train from southwestern Poland to Kyiv.

"So we didn't see a lot except looking out the train window. In Kyiv itself, we went right to the presidential palace."

The US top diplomat said, "there wasn't much of an opportunity to talk to average Ukrainians."

We certainly saw people on the streets in Kyiv — evidence of the fact that the battle for Kyiv was won," he said.

On the surface, there were signs of "normal life" in parts of the city, he said.

"But that's in stark contrast to what's going on in other parts of Ukraine, in the south and the east, where the Russian brutality is doing horrific things to people every single day," Blinken said.

American diplomats will be back in Ukraine "starting next week," US Secretary of State Antony Blinken said Monday.

"They'll then start the process of looking at how we actually reopen the embassy itself in Kyiv, I think that will take place over a couple of weeks," Blinken said.
"We're doing it deliberately. We're doing it carefully with the security of our personnel foremost in mind."

Blinken said that US President Joe Biden will nominate Bridget Brink as the US Ambassador to Ukraine. He described Brink as "deeply experienced in the region." The post has been without a confirmed ambassador since Marie Yovanovitch was recalled in May 2019. Brink is the current US ambassador to Slovakia. 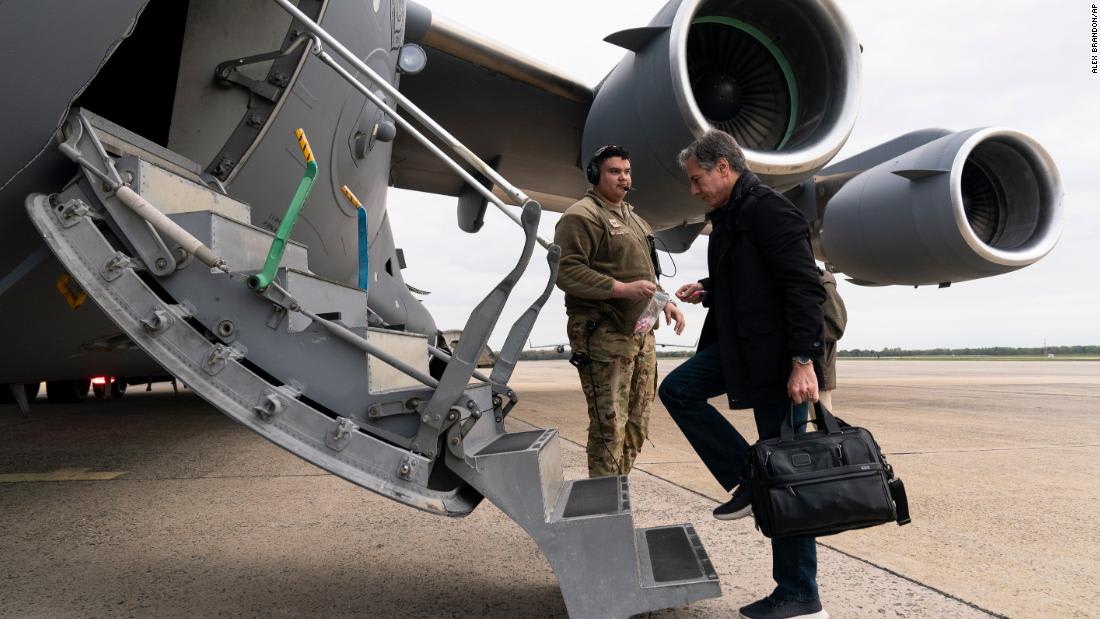 US Secretary of State Antony Blinken said Monday that a "sovereign independent Ukraine will be around a lot longer than Vladimir Putin is on the scene".

"The bottom line is this. We don't know how the rest of this war will unfold, but we do know that a sovereign independent Ukraine will be around a lot longer than Vladimir Putin is on the scene," Blinken said. "And our support for Ukraine going forward will continue. It will continue until we see final success.

Speaking at a news conference at an undisclosed location near the Polish-Ukrainian border, Austin said it was "a very productive meeting" and an "engaging session."

"We were very happy to have that opportunity," he said. "During the meeting, we expressed our deepest condolences to the president for the loss of so many civilians, and of course, the loss of those courageous troops that have done a magnificent job of pushing back Russian forces.
"We also expressed our admiration for their professionalism and for their commitment to defend their democracy."

US Defense Secretary Lloyd Austin said Ukraine's needs are changing as the nature of the fight evolves, in part because the focus has shifted to the east of the country.

"So (the Ukrainians) need long-range fires. You've heard them express a need for tanks. And we're doing everything that we can to get them the types of support, the types of artillery and munitions that will be effective in this stage of the fight," Austin told reporters during a news conference at an undisclosed location near the Polish-Ukrainian border following high level talks on Monday.
"You've seen what we've done here in the recent past with a recent $800 million authorization provided by the President that allows us to provide five battalions of 155 howitzers, hundreds of thousands of rounds of artillery, and so we're also engaging our colleagues in other countries for the same type of capability."

Austin said he has seen "indications" that "many countries are going to come forward and provide additional munitions and howitzers."

So we're going to push as hard as we can, as quickly as we can to get them what they need," he said.

Some context: US Secretary of State Antony Blinken and Austin traveled to the Ukrainian capital on Sunday, where they met Ukrainian President Volodymyr Zelensky and other Ukrainian officials, making them the highest-level US officials to have traveled to the country since the Russian invasion began in late February.

US Secretary of State Antony Blinken told reporters Monday that Russia was "failing in Ukraine" and that "Ukraine is succeeding."

"Russia has sought as its aim to take away (Ukraine's) sovereignty, to take away its independence. That has failed," Blinken said during a news conference at an undisclosed location near the Polish-Ukrainian border.
"It sought to assert the power of its military, its economy. We of course are seeing just the opposite.
“We don’t know how the rest of this war will unfold, but we do know that a sovereign independent Ukraine will be around a lot longer than Vladimir Putin is on the scene.”

Blinken and Defense Secretary Lloyd Austin met Ukrainian President Volodymyr Zelensky and other Ukrainian officials in Kyiv on Sunday, making them the highest-level US officials to have traveled to the country since the Russian invasion began.

Russia has made "minor advances" since shifting its focus to taking control over the eastern Donbas region, the UK Ministry of Defence (MoD) said Monday.

"Without sufficient logistical and combat support enablers in place, Russia has yet to achieve a significant breakthrough. Ukraine’s defence of Mariupol has also exhausted many Russian units and reduced their combat effectiveness," the MoD said on Twitter in an intelligence update.
"Russia’s Ministry of Defence has proposed compensation payments for the families of deceased service personnel be overseen by military rather than civilian officials. This likely reflects a desire to hide the true scale of Russia’s losses from the domestic population."