The Nobel Peace Prize has been awarded to Abiy Ahmed, the Ethiopian Prime Minister who helped end his country's 20-year war with Eritrea.

The conflict between Ethiopia and Eritrea over disputed border territory came at a huge financial and humanitarian cost for both countries.

Abiy, 43, also recently won plaudits for his role in helping to broker a power-sharing deal in neighboring Sudan after a political crisis that led to the arrest of Omar al-Bashir, the country's ruler for almost three decades.

Berit Reiss-Andersen, the chair of the Norwegian Nobel Committee, said Abiy -- who has received both praise and criticism for his reforms in Ethiopia -- has not been recognized too soon, but acknowledged that progress still needs to be made in the country.

You can read more about the Nobel committee's decision here...

...and find out about Abiy's tenure as Ethiopia's leader here.

The 2019 Nobel peace Prize laureate is receiving praise from leaders around the world.

Antonio Guterres, the UN General Secretary, said his leadership has set a "wonderful example" for the international community.

Raila Odinga, the former Kenyan prime minister, said the prize is "an honour to our Continent which has long been held back by wars."

Amnesty International were less effusive in their praise for Abiy, saying the award should "motivate him to tackle the outstanding human rights challenges" in Ethiopia.

Here's the moment that Berit Reiss-Andersen, the Chair of the Norwegian Nobel Committee, revealed that Abiy Ahmed had won the Peace Prize.

The Ethiopian Prime Minister's office has tweeted out a statement after Abiy Ahmed was named the Peace Prize winner.

It says the office is "pleased to express our pride" in the selection, adding that Abiy "has made peace, forgiveness and reconciliation key policy components of his administration."

Here's a few more comments from Berit Reiss-Andersen, the Chair of the Norwegian Nobel Committee, on why the committee gave Abiy this year's award:

"When Abiy Ahmed became Prime Minister in April 2018, he made it clear that he wished to resume peace talks with Eritrea. In close cooperation with Isaias Afwerki, the President of Eritrea, Abiy Ahmed quickly worked out the principles of a peace agreement to end the long “no peace, no war” stalemate between the two countries."

"Peace does not arise from the actions of one party alone. When Prime Minister Abiy reached out his hand, President Afwerki grasped it, and helped to formalise the peace process between the two countries. The Norwegian Nobel Committee hopes the peace agreement will help to bring about positive change for the entire populations of Ethiopia and Eritrea."

She commented too on Abiy's domestic reforms as leader:

In Ethiopia, even if much work remains, Abiy Ahmed has initiated important reforms that give many citizens hope for a better life and a brighter future. He spent his first 100 days as Prime Minister lifting the country’s state of emergency, granting amnesty to thousands of political prisoners, discontinuing media censorship, legalising outlawed opposition groups, dismissing military and civilian leaders who were suspected of corruption, and significantly increasing the influence of women in Ethiopian political and community life. He has also pledged to strengthen democracy by holding free and fair elections.

But she accepted that several challenges remain in bringing peace and security to the country:

Ethiopia is a country of many different languages and peoples. Lately, old ethnic rivalries have flared up. According to international observers, up to three million Ethiopians may be internally displaced. That is in addition to the million or so refugees and asylum seekers from neighbouring countries. As Prime Minister, Abiy Ahmed has sought to promote reconciliation, solidarity and social justice. However, many challenges remain unresolved. Ethnic strife continues to escalate, and we have seen troubling examples of this in recent weeks and months. 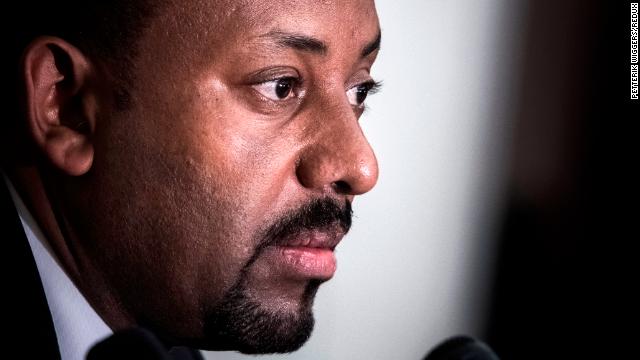 The Nobel committee couldn't get the Ethiopian Prime Minister on the phone before announcing that Abiy Ahmed had won the award, Berit Reiss-Andersen says.

"If he's watching us now, I would just convey my warmest congratulations," she adds.

Berit Reiss-Andersen, the Chair of the Norwegian Nobel Committee, was asked by a journalist whether she had a message to disappointed supporters of Greta Thunberg, the bookmakers' favorite to win the prize.

Reiss-Andersen reminded those watching that the committee never comments on its own deliberations.

"On the day when we announce the prize we never comment on who didn't get the prize, and who could have had the prize," she said, adding that she has "no comment" on the question.

There's no way of knowing for sure whether Thunberg was even nominated -- the names considered are kept secret for decades -- but it's almost certain she was put forward.

The Nobel Peace Prize was given to Ahmed "for his efforts to achieve peace and international cooperation, and in particular for his decisive initiative to resolve the border conflict with neighboring Eritrea."

Here's what they said when they announced the winner on Twitter.

"As Prime Minister, Abiy Ahmed has sought to promote reconciliation, solidarity and social justice," says Berit Reiss-Andersen, the Chair of the Norwegian Nobel Committee, at the press conference in Oslo.

"However, many challenges remain unresolved," she adds. "Some people will think this year's prize is being awarded too early."

But she says the committee "believes it is now that Abiy Ahmed's efforts deserve recognition and need encouragement." Reiss-Andersen adds that she hopes the prize can "strengthen Prime Minister Ahmed in his important work."

"Rome was not made in a day," she adds, and neither will peace and democratic development be achieved that quickly.