What it looked like: Over two weeks, nations finalized how to implement the goal of limiting global warming to significantly less than two degrees.

After two weeks of difficult negotiations, the world's nations agreed on a set of rules meant to help curb global warming.

This so-called "Paris Rulebook" is supposed to put into motion the landmark 2015 Paris Agreement on climate change.

But scientists and even the negotiators themselves acknowledge the rulebook won't be enough on its own to stop carbon pollution from reaching critical levels.

Read more about what was agreed at COP24, and an analysis of how some nations are still arguing over basic climate science.

We’re signing off for now, but we’ll return when a decision has been reached.

Climate negotiations at COP24 in Poland appear to be nearing a close. Two government ministers and one senior negotiator in the closed-door talks tell CNN that only one issue remains -- how countries report the pollution that causes warming, and whether they may be allowed to "double count" some of it. Brazil is among the countries holding up the talks on this point, negotiators said. Small island states have begrudgingly conceded to "compromise" language concerning the state of climate science, according to Simon Stiell, minister of climate resilience and environment from Grenada, in the Caribbean.

That had been another major point of disagreement, with the United States and others not wanting to "welcome" the results of a recent report from the Intergovernmental Panel on Climate Change. "Right now we are close," Norway's climate and environment minister, Ola Elvestuen, told CNN. "But there is always something at the end. Nothing is agreed until all is agreed." A plenary session is scheduled for 12pm ET/6pm local.

Read what the IPCC report expects from you

The Trump Administration's refusal to "welcome" the results of a major scientific report on climate change is seen as a sticking point at the COP24 climate change talks in Poland, which are still in overtime without resolution.

Officials on have today released a new draft of a contentious statement that has hung like a cloud over these negotiations.

At issue is a report from the UN Intergovernmental Panel on Climate Change (IPCC), which says drastic cuts to fossil fuel and other carbon pollution are needed in order to avoid disastrous levels of global warming. The new draft text “welcomes the timely completion” of that report. That is an “elegant compromise” that stops short of the endorsement that the European Union and small-island countries had wanted; and also acknowledges the fact that the United States does not endorse the report, said Camilla Born, senior policy advisor at E3G, an environmental policy think tank. “They're welcoming the fact that they’re doing it on time. I read that bit as a recognition of (the report) – but it doesn’t make any political judgement on its value,” she said.

It remains unclear how countries will react to the language, she said.

Negotiators from around the world have been in closed-door meetings this morning and overnight on Friday.

Debate about whether to “welcome” or simply “note” the findings of that report have stalled negotiations and flared emotions, observers say.

The United States, Saudi Arabia, Kuwait and Russia last weekend refused to “welcome” the findings of the report, stunning some delates from other countries that consider climate change an urgent threat.

Brazil also is a "hard-liner" in the talks over how credits for pollution reduction are handled, according to a senior negotiator in the closed-door meetings. "It looks like they are going to push this to the limits," the source said.

Brazil's request could be viewed as an effort to double-count pollution reduction efforts, according to the senior negotiator.

That single issue -- but likely not the entire rule-making effort -- could be pushed out of the discussions here and into talks next year, observers said.

The COP24 UN climate talks in Poland were going into overtime on Saturday morning as negotiators continued closed-door sessions. There are some areas of agreement among countries about the "Paris Rulebook," which is meant to govern the cutting of greenhouse gas emissions; but "deep divisions" remain, a senior negotiator inside the talks tells CNN. The talks were supposed to conclude on Friday. Plenary meetings of the parties have been repeatedly delayed. The talks focus on the mechanics of the Paris Agreement on climate change, which the United States has promised to abandon. 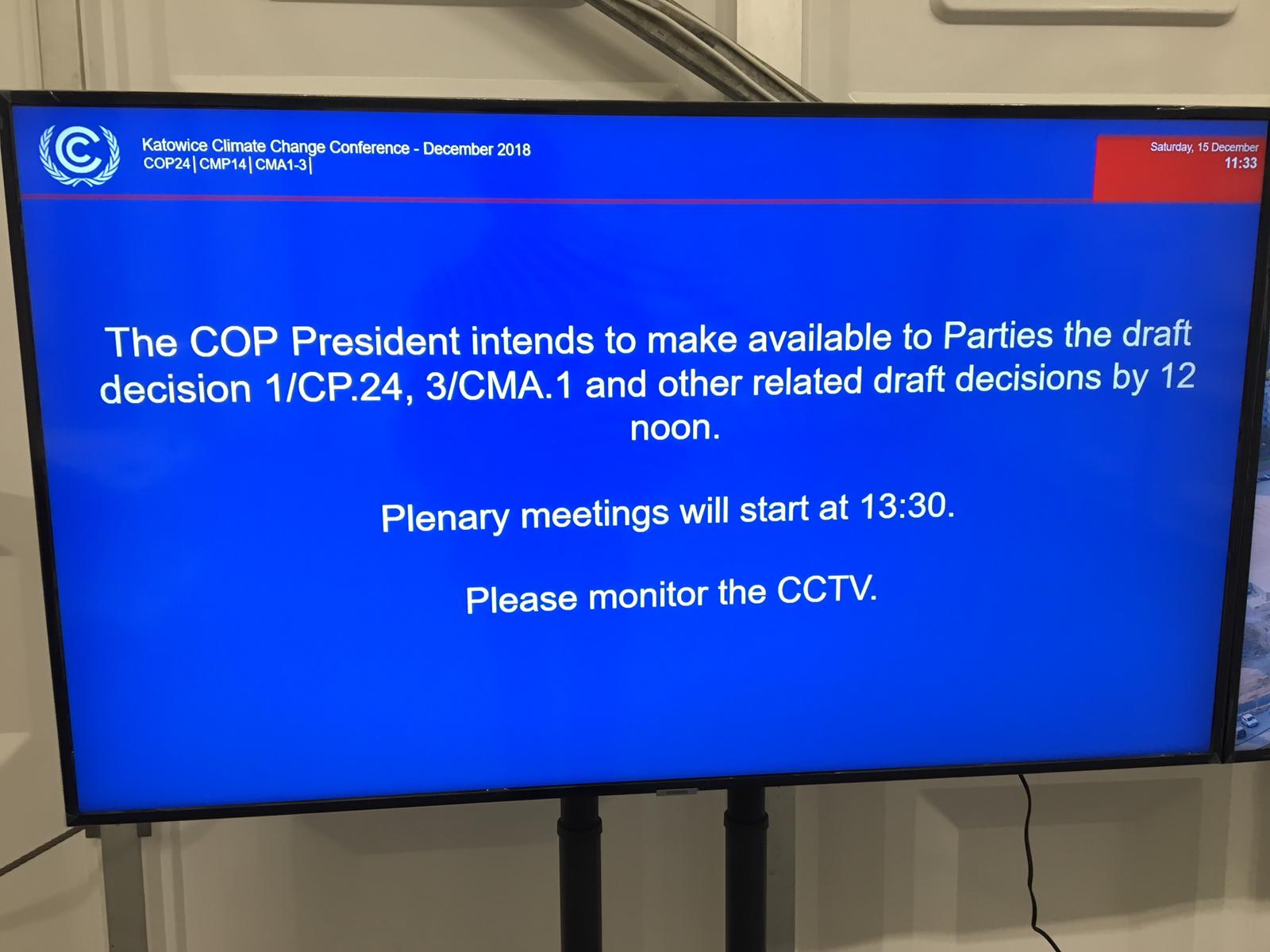 After a long night of delayed meetings and negotiations, we're still waiting for a statement on the rulebook.

We'll bring that news to you when it happens.

On what is meant to be the final day of talks at COP24, there’s still no consensus on a final text.

We’re signing off for now, but we’ll return when a decision has been reached.

At a press conference this afternoon the “High Ambition Coalition” -- which includes the EU, Canada, Costa Rica, Argentina, New Zealand, Norway, and a number of small island nations -- called for a robust Paris rulebook.

“We need three things from this COP:

"One, is the IPCC report must be front and center coming out of this COP and in all future work.

"Two, there must be a clear signal that there will be an increase in ambition coming out of this COP.

"Three, we need a rulebook that will fully implement all aspects of the Paris Agreement and lead to ambition.”

After two weeks of discord, negotiations to save the world from disastrous levels of global warming are sputtering toward a conclusion.

The point of the negotiations is to come up with a “rulebook” that will make real the Paris Agreement on climate change, which countries agreed to at a previous round of these talks in 2015.

New, but not final, drafts of those rules were released last night and will continue to be revised.

But not everyone is happy with the draft texts.