Moments ago, Johnson said the "Empire" actor staged the attack on himself because he was unhappy with his salary. Smollett was treated as a victim until police learned more details, Johnson said.

"When we discovered the actual motive, quite frankly, it pissed everybody off because we have to invest valuable resources," he said.
See more:

Chicago police superintendent Eddie Johnson said police did not give Jussie Smollett's reported hate crime any extra attention or effort — officers treated it the way they treat every hate crime.

"Any time a hate crime is reported in the city of Chicago, it gets the same attention. This didn't get any special attention. You all gave this more attention specifically than we do," he said, referring to the media while speaking to reporters at a news conference.

"We give every hate crime in this city the same amount of vigor because there is no place for hatred in this city," he added.

Johnson added that police "didn't pull resources from shootings or homicide investigations" in order to investigate Smollett's report. Those officers work on different teams, he said.

According to Chicago police, Jussie Smollett paid $3,500 to two brothers to stage an attack.

The alleged attack went down on the street. The two men, who were wearing gloves, punched Smollett "a little bit," superintendent Eddie Johnson said.

However, the scratches and bruises on his face were likely self-inflicted, according to Johnson.

"I want to thank all of the Chicago police officers who have worked on this case, and all of the private citizens and business owners who have stepped forward with information and video evidence to help us get to the bottom of what was reported as a hate crime.
All across Chicago, in every neighborhood, there are signs in front yards and in windows that read, "Hate Has No Home Here." It is a sign that expresses our shared values and defines our great city. Chicago's message to the world is that no matter where you come from, who you love, or how you pray you will always have a home here. Our laws exist to reflect and defend those values, and hate crimes will never be tolerated. A single individual who put their perceived self-interest ahead of these shared principles will never trump Chicago's collective spirit." 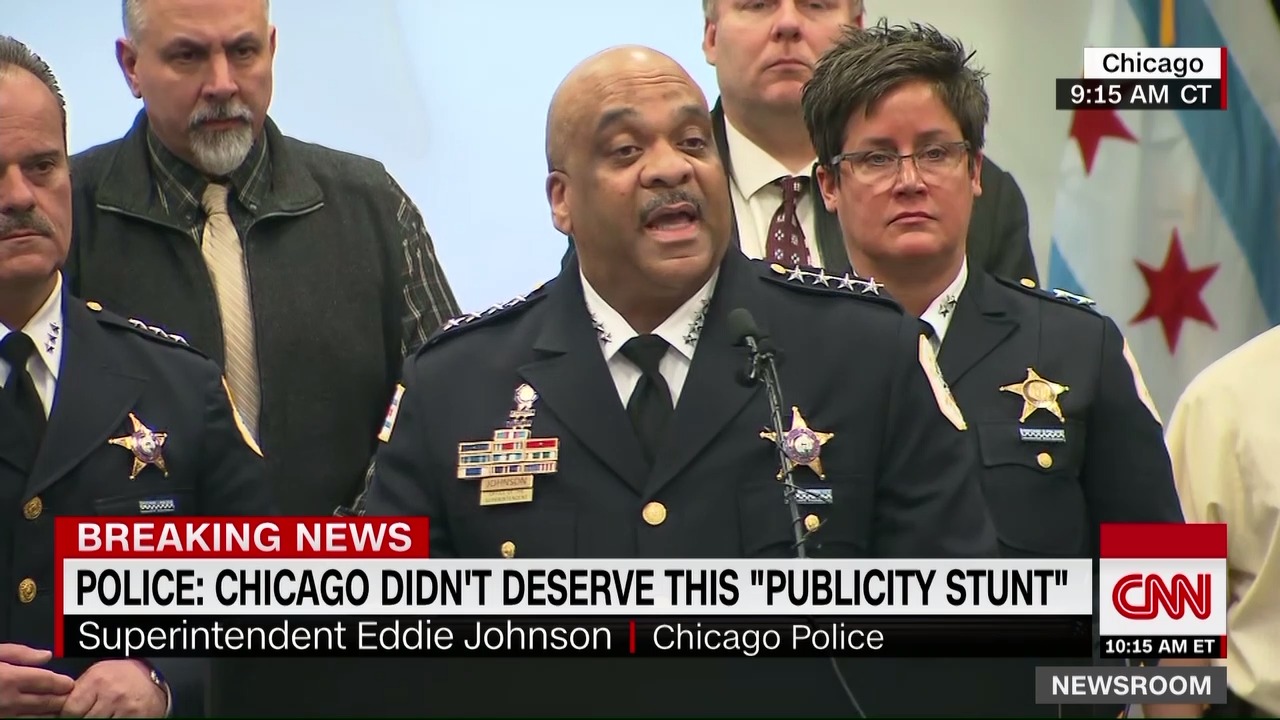 Smollett first "attempted to gain attention by sending a false letter that relied on racial, homophobic and political language," an apparent reference to a letter sent to the "Empire" set in the days before the attack.

"When that didn't work, Smollett paid $3,500 to stage this attack and drag Chicago's reputation through the mud in the process," Johnson said. "And why? The stunt was orchestrated by Smollett because he was dissatisfied with his salary. So he concocted a story about being attacked."

Jussie Smollett was reportedly unsatisfied with his salary on "Empire" and paid $3,500 to stage the attack on himself, according to police superintendent Eddie Johnson.

He added that Smollett send a "false letter that relied on racial, homophobic and political language."

Johnson said Smollett was treated "as a victim" until evidence pointed in a different direction.

"This publicity stunt was a scar that Chicago didn't earn and certainly didn't deserve," Johnson said. 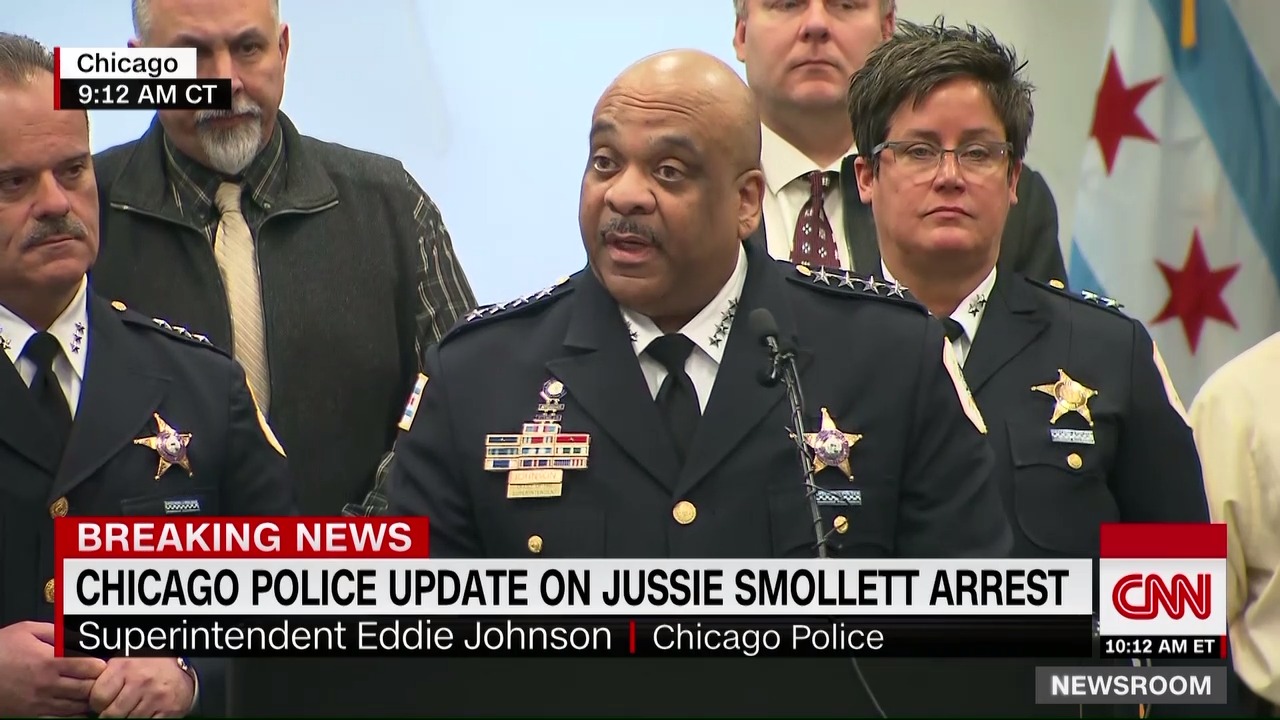 Here's how he introduced the case at today's press briefing:

"This announcement today recognizes that empire actor Jussie Smollett took advantage of the pain and anger of racism to promote his career. I'm left hanging my head and asking why."

He continued: "Why would anyone — especially an African-American man — use the symbolism of a noose to make false accusations? How could someone look at the hatred and suffering associated with that symbol and see an opportunity to manipulate that symbol to further his own public profile?" 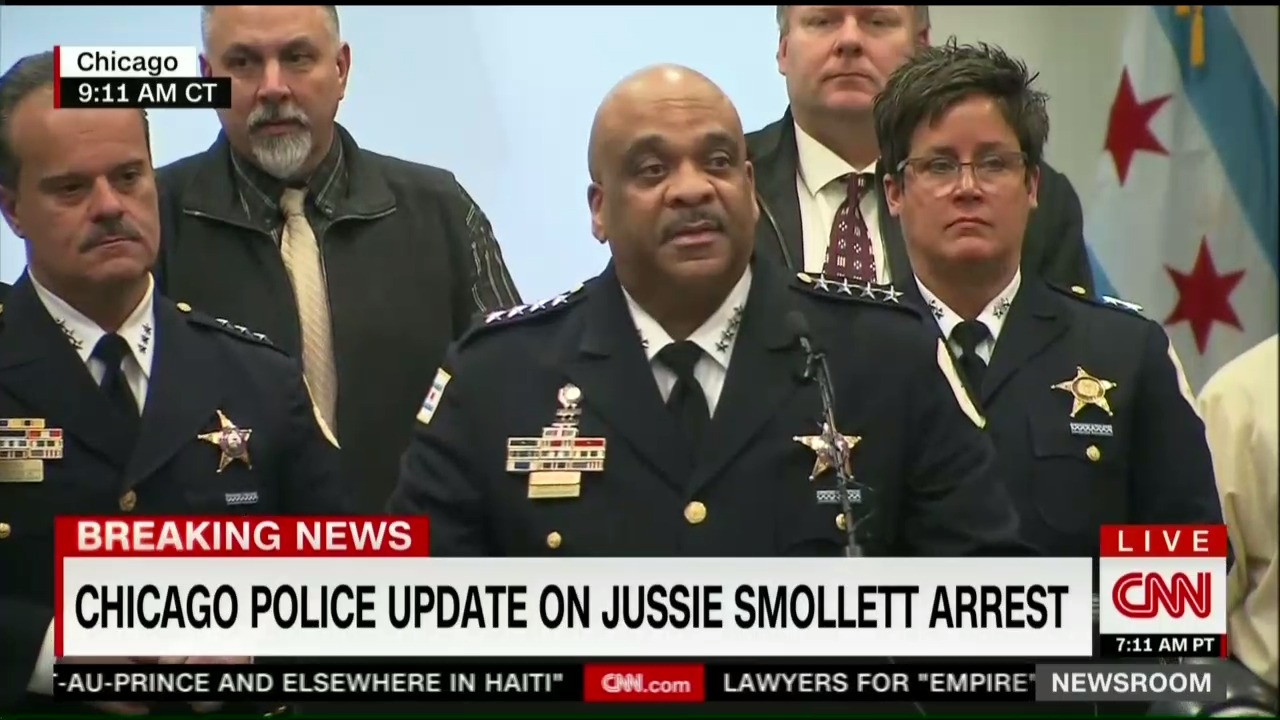 "Before I get started I look out into the crowd, I just wish that the families of gun violence in this city got this much attention because that's who really deserves the amount of attention that we are giving to this particular in distinct," Johnson said.

Some background: The city has struggled to contain violence in almost every major category of crime since 2016.

Chicago saw a significant drop in murders and gun violence for the second year in a row, according to police. Across the city, there were 100 fewer murders than in 2017, when 650 people were killed. Overall crime is down 10% since 2016, the year Chicago recorded its highest murder rate in two decades, with 762 people killed.

Chicago Police credit the drop in violence partly to "investments in data-driven policing and the creation of strategic decision support centers in 20 of the city's 22 police districts," according to a Chicago police news release. 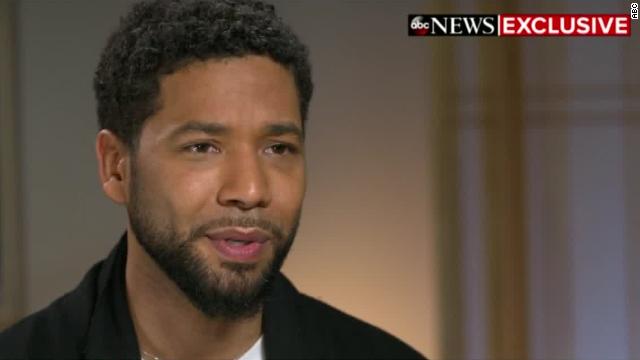 Jussie Smollett told "Good Morning America" last week he was "forever changed" by the incident and was "pissed off" by both the attack and the doubt that has been cast over his story.

In an interview with Robin Roberts that aired on Thursday, Smollett said one of the attackers said, "'This MAGA country, n****r' and he punched me in the face so I punched his a** back."

"It feels like if I had said it was a Muslim or a Mexican or someone black, I feel like the doubters would have supported me a lot much more," Smollett said. "And that says a lot about the place where we are as a country right now."

He also said he respects victims of hate crimes too much to lie about what happened.