Our live coverage of the Grammys has ended. Thanks for reading!

It was a night of both mourning and triumph.

Billie Eilish swept four of the top categories -- Best New Artist, Song of the Year, Record of the Year and Album of the Year -- while the death of NBA legend Kobe Bryant, his 13-year-old daughter and a reported seven others in a helicopter crash Sunday was on the minds of many who took to the stage. 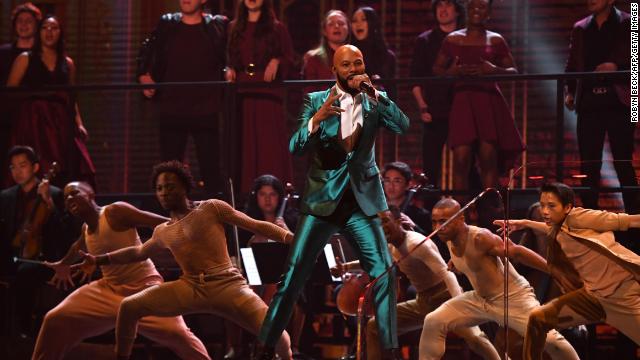 Music's biggest night also saw the return of Demi Lovato for an emotional performance and a tribute to the late rapper Nipsey Hussle, who won a posthumous Grammy.

And there were many other momentous performances -- both good and bad -- ranging from Tyler, the Creator literally bringing the fire onstage to a Jonas brother who sang with with food in his teeth.

So yes, it was truly a night to remember. Thanks for following along with us.

Eilish became the first woman and only the second artist to win Best New Artist, Song of the Year, Record of the Year, and Album of the Year during the same year. The only other artist who has accomplished the feat was Christopher Cross at the 23rd Grammy Awards in 1981.

Now that's one hell of a resume for a teenager.

"Fame" was THE movie for folks of a certain age.

So when a star-studded group of singers, including Camila Cabello, Cyndi Lauper, Broadway star Ben Platt, Common and ballerina Misty Copeland took to the stage to perform "I Sing The Body Electric" from the 1980 film (which spurred a TV series of the same name), it was a moment.

The performance was part of a tribute to Ehrlich as he ended his 40 years producing the awards show.

It made lots of people happy -- and a few on social media confused if they weren't familiar with the film.

Billie Eilish is having one hell of a Grammys night.

In addition to Song of the Year, Eilish just took home the Best New Artist statue.

The singer wanted to send some special love out to fans who she felt like hadn't gotten enough recognition on Grammys night.

"They are the only reason any of us are here at all," she said. "So thank you to the fans."

She also expressed love for her fellow nominees in apparently colorful language, because a portion of it was bleeped out.

John Legend and DJ Khaled accepted the award for the late Nipsey Hussle win for Best Rap/Sung Performance for "Higher" at the Grammy awards.

Ozzy Osbourne and Sharon Osbourne presented the award for best rap performance, with Khaled giving a "big up" to Nipsey's "family and kids."

Legend thanked his wife, Chrissy Teigen, and family, saying "let's love each other, let's love our families, let's hold each other tight."

Following the tribute, a graphic of Nipsey and Kobe Bryant was projected on the stage.

Billie Eilish just won the Song of the Year Grammy for "Bad Guy."

The 18-year-old became one of the youngest to ever nab that award.

She was 17 when she was nominated.

"Why?" she said as she accepted the award. "Oh my God, so many other songs deserve this, I'm sorry."

Eilish also introduced her brother and collaborator, Finneas, whom she called her "best friend."

"This is a really, really big deal," he said. "We just make music in a bedroom together. We still do this. They let us do that."

Spanish singer-songwriter Rosalía performed in her native tongue and tore the stage up with her moves and backup dancers.

The moves were as enviable as the music was banging.

The Best New Artist nominee has hopped on tracks with the likes of James Blake and Travis Scott.

The latter may explain why she and Kylie Jenner are BFFs. Jenner is the mother of Scott's young daughter, Stormi.

Nick Jonas is about to be a "Sucker" for dental floss after the Jonas Brothers' Grammy performance.

Fans of the trio were quick to point out a small bit of food stuck in Nick's teeth, and yeah, that's basically a nightmare come true.

If it were us, we'd probably be hiding deep in a hole, never to be seen by humans again. But Nick is the King of Cool and was ready with quite the comeback.

You gotta love a man who eats his greens though. Kudos to you Nick.